If my grandmother had decided on purpose to give my grandfather only one good ear—see that bust over there? The one missing the outer tip, left side?—well then. But that’s not the case. She meant to finish it—finish it, she did: so what happened to his ear? Who broke it? How did it break? Who picked it up? Who threw it away? Who didn’t get out the crazy-glue? A thing cracked (repaired)—well. That’s how the light gets in, okay. Whereas a thing chipped for all time, a thing missing a piece—a plate or a puzzle, for example (having once been all-of-a-piece)—is somehow dead on arrival—

so I’m saying: better to decide, on purpose, to leave it unfinished, whatever it is. But Grandma didn’t get that. Look over there: check out those nasolabial folds, oh my. TMI, am I right? Whereas to intentionally invite me to fill in this line, that shadow, the life-pulse all by myself? Who could ever turn away from such a piece of art?

Grandpa got that. He knew. He abandoned the clay and the palette, too, for goggles and a torch. Thus armed he went out to the yard to battle great sheets of steel into giant circles and curves. Once finished—unassailable, unbreakable—they stretched and whirled, reached toward the sky, sliced into the white, silver, blue.

Meanwhile, in the house, grandma labored. Imagine her hunching over that head. Pushing and poking at the slab—biting her bottom lip, breaking her nails—later rubbing lotion into her fingers, dry, rough-calloused, dark-creased—all that effort, only to end up with raggedy hands and a dead sort of likeness; eyes vacant, even in profile (to hide the damaged ear). 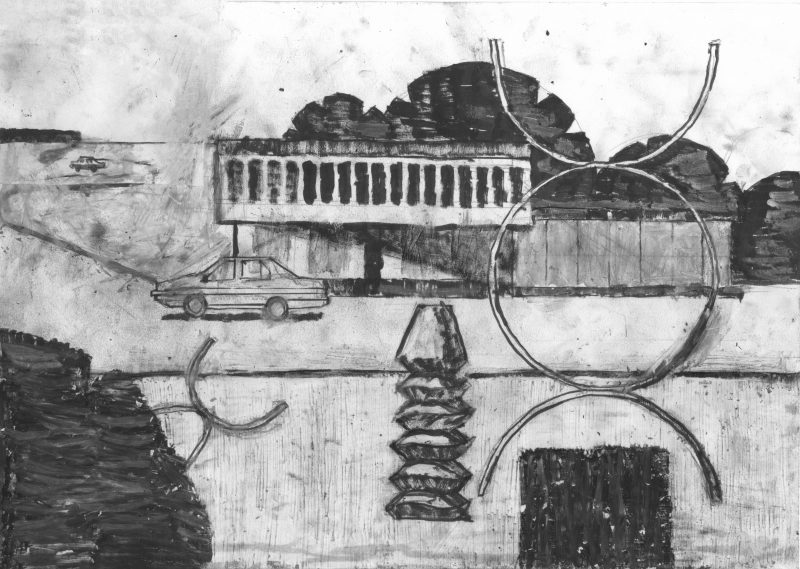 You’d think I’d make a pilgrimage—
(you’d think I’d find out, at least, where they are: 200 in all—200 stainless steel sculptures—where did they go? Where are they planted?)
once there, at some site or other, you’d think I’d get out of car; and of course I would, assuming I got into it in the first place.

But that’s just so unlikely—a drive-by or anything else—only slightly more likely, I suppose, than a visit to his actual grave (definitely not happening)—speaking of which:

“Do you remember his funeral?” my uncle asked a while back. We were talking about grandpa, about all that art (even so, even then, I didn’t ask where). “Do you remember what we did?”

What did they do, what did they do— I was supposed to remember—
and it came to me then: how they stumbled from one of the cars, my uncles, in overcoats and dress shoes—the day cold and bright—and between them they carried a sculpture, one of the smaller ones; how they nonetheless strained and grunted under its weight, not so much hurling it into the plot as simply letting go. A grand thud then, and some laughter, I think—did we actually laugh? I’m certain we did. 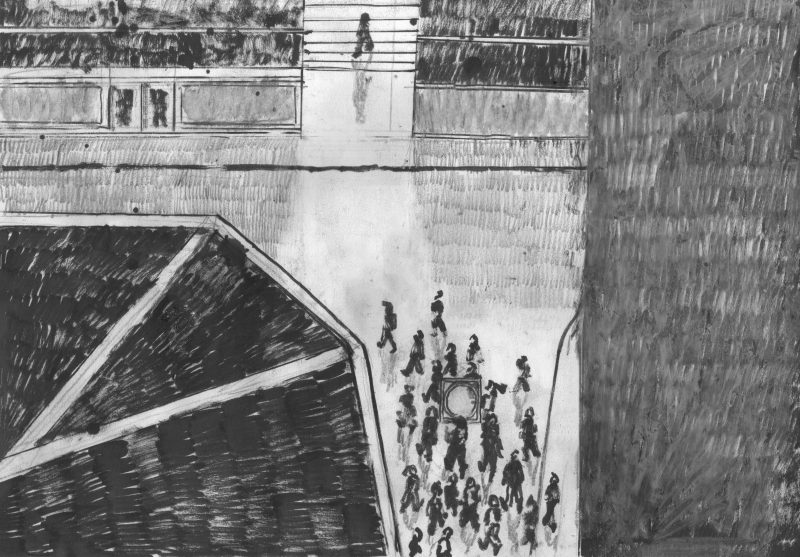 Where to look for the dead?
Not in the obvious places—not in their graves; not in their homely solitude; nor, in my experience, do they turn up in other favorite haunts (I’ve looked)—
not when they can be milling around in the world with the rest of us.

That’s where I see you every once in a while—you dead people, you—in crowds. Crowd-milling. Always five or ten steps ahead, crossing that street, turning that corner. I used to quicken my pace; to trip and bump and elbow my way to catching up; only, more often than not, to lose you all over again, to the bus, the train, the alley, the escalator whisking you up and away.

And let me just add that it never occurred to me in the moment that that’s who you were—the dead, I mean. What did I think? I don’t know. I wasn’t actually thinking: I saw you! There you were! There was the back of your head; the familiar stance, or slouch, or slump; something about your hands in your pockets, maybe, or your gait, or the way you glanced at your watch or the sky—it had to be you, I was just so sure—

only to be disappointed, of course. If I did or I didn’t get close, either way. So by now I know better. I don’t follow anymore. That’s somebody else’s ghost, I tell myself, not one of my own. But if it were mine? What would I do? Let’s say I got close enough to grab at your sleeve, and you turned around, and it was actually you, yourself, not a stand-in: not shorter, taller, fatter, thinner, younger, older—

what would I say? What if you didn’t remember me—then what? 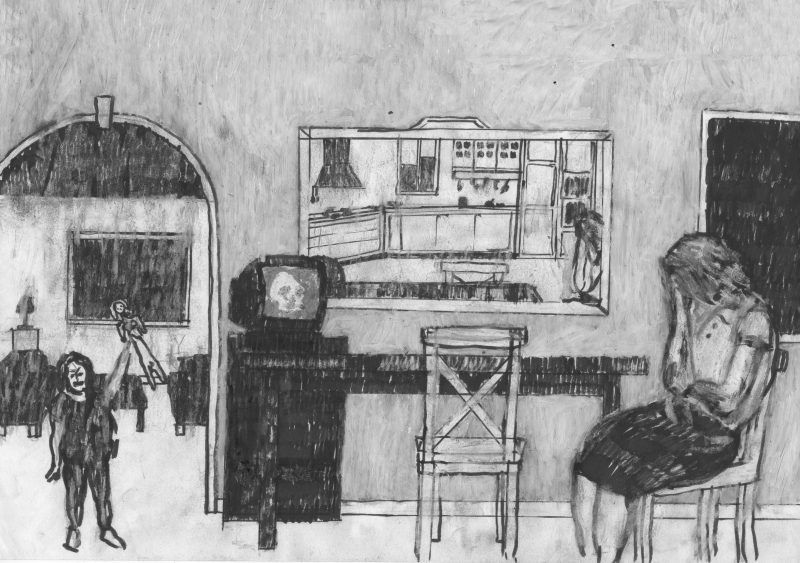 There’s a poem by Dorianne Laux, it’s called—not “Poppy,” though that’s how I think of it: wait, wait—

The gist of it is that the poet has to put down her work to give her kid a ride to the bus (do you believe this? That I’m paraphrasing a poem? But, oh well, no stopping me now)—

so she goes looking for her bag, her keys, all the while trying to keep her poem, a particular line anyway, in her head.

Then they’re in the car, the mother and daughter. She, the mother (the poet) is searching for something to write on, repeating the line, repeating the line, when her kid points out the window to a flower growing up from the pavement: “the poppy I told you about,” says the girl. They start talking about that and other stuff, too (shame on me, summarizing poetry, yeesh), and they get to the bus stop, and before she jumps out, the girl kisses her mother goodbye, which “is so unlike her,” writes the poet—

but by that time the line is gone with the rest; the whole poem “lost,” writes Laux, “…hovering like an orange flower over the gravel street.” In its place, though, this poem—this life—right?

On a long-ago afternoon, we were visiting my parents in the country, and my daughter wanted to play. One by one, she invited us: one by one we said maybe later, not now. Eventually she found her way to the hall, where she stood at the foot of a tall ladder and looked up at my dad, who was painting the uppermost molding. “Grandpa, will you play with me, please?”

He climbed down, stuck his brush in a can of turpentine, took her hand, and together they walked out the door and into the day. 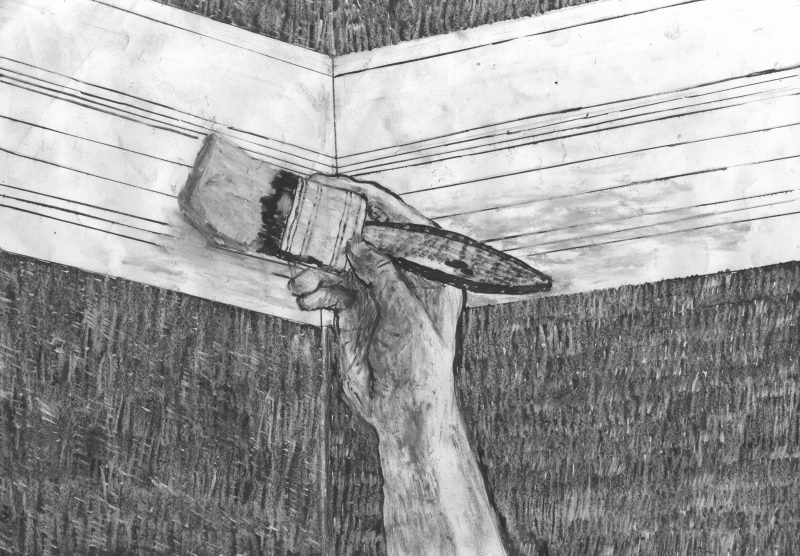 Someone mentions how he loved that house.

“He was always outside,” says my mother.

Not strictly the case, though no question, that’s what he loved, the views—the sky, the hills in the distance, the undulating fields—all his, all that land, and that being so there were chores to be done outside—

like he was up in the trees, hanging feeders, picking fruit—peaches, plums, two kinds of apples, at least—

or down on his knees, planting and weeding—
other times, chopping and stacking wood—
driving his tractor—
or he was out in the barn, sorting and storing bulbs, dahlias, mostly, I think.

But he was inside, too. Hanging a frame or a shelf, fixing a door or a window—and painting, of course; it was she who had him all the time painting—trying a new color here, touching-up there.

“He was always outside,” she says it again. Almost to herself. And it’s not a complaint so much as—as what? A facing off with what? That he wasn’t up for keeping her company? He had things to do, compelling things: the man was busy from the moment he woke, when he dressed right away, then put on the kettle, and squeezed the oranges, and made the toast, and buttered hers and boiled her egg (he scrambled his own)—at which point she came down in her robe—

and they ate together. And they read the newspaper. Then he cleaned up their breakfast and off he went. 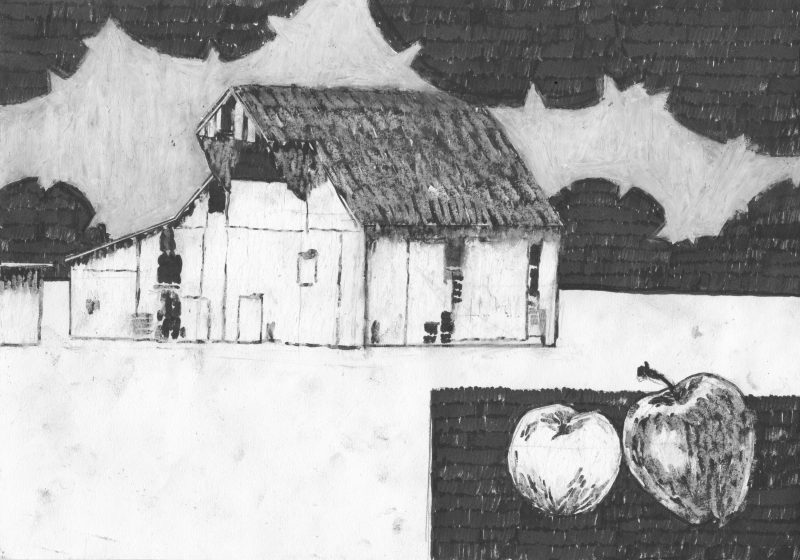 Mom, what kind of apples?

We had so many kinds. Macs, of course. And greenings for pies. The best pies, the ones we used to make, nice and tart. (Not the same as Granny Smiths, she says. People think just because they’re green…)

Peaches, yes. Two kinds—regular and donut. (They were delicious.) And a sour cherry. And a plum, but it wasn’t happy, she says. Same deal, she recalls, with the fig. Which was just outside the kitchen. But it didn’t take off.

Well, we had a magnolia. The kind that flowers green. And a blue spruce. And Princeton elms, of course. (And then she’s off: something about Thomas Jefferson—about how before he invented pillars, he used Princeton elms. And did I know, by the way, that Jefferson and Adams died the same day? That by then they were mortal enemies?)

What about the willow, I ask. The willow was my favorite.

A willow, yes. And a honey locust. And tulip poplars—

When they first moved in, she goes on, they began taking out those offending elms and a few of the volunteer maples, too. Then said one of my brothers (“alarmed,” says my mother), for every tree you take down, you have to plant another.

Nothing gave me so much pleasure in that place as the trees, she says.

And yet. She lives in an apartment now. With her silver, china, art. She never opens the windows, just adjusts the thermostat as needed. I’m hermetically sealed, she says, with a grin. 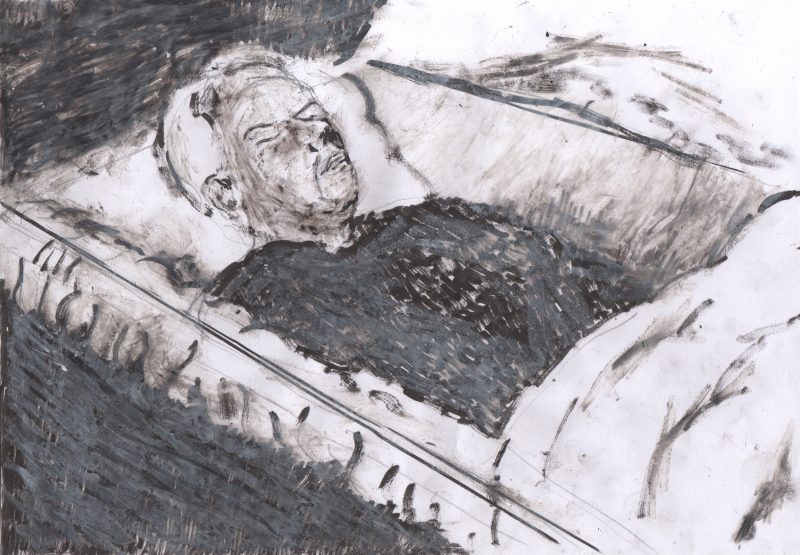 How strange dad looked in his coffin, not a bit like himself—although those were his eyebrows, yowza, and his eyelashes, too, very straight, but something was off, what? Then I realized: he was missing his glasses.

Funny, it only occurs to me now, and means about nothing, I guess—but that bust of grandpa, my grandpa (not my daughter’s), the one over there on the corner shelf, it used to have glasses, too. Grandma made them—a removable replica of the originals. Iron-cast. They disappeared long before she sent him to me and she never did find them. So poor grandpa is not only missing the tip of his ear, but also his corrective lenses.

Anyhow, the other strange thing—about dad in his coffin, and grandpa, too, for that matter—they both looked so small. Coffins. Whose idea was that, to box up a human, a grandfather—mine or my daughter’s—the one who dreamed up statuary meant to be part of the landscape forever; the other who was always outside.

I’m saying: the living can do as they please, that’s their business. But it doesn’t make sense to seal up the dead. Which is why I was comforted to recently learn—from my daughter—that I don’t have to wind up in a box or an urn or whatever. I can actually be a tree. We can plant you, she said. So I’m considering: do I want be deciduous? Coniferous? Fruit-bearing? Shall I do the next life as a poplar or a pine? A greening or a flowering peach? Or maybe I should be a willow, after all. The weeping kind.

Jamie Smyth is a designer from Waterford, Ireland. He has exhibited work in Dublin, Waterford, Helsinki and St.Petersburg. He currently lives and works in London.

Dinah Lenney co-edited Brief Encounters: A Collection of Contemporary Nonfiction with the late Judith Kitchen. She is the author of two books of nonfiction: The Object Parade, and Bigger than Life and she’s currently working on a book about coffee for the Bloomsbury Object Lessons series. Other work has appeared in a variety of publications including The New York Times, The Los Angeles Times, AGNI, Creative Nonfiction, and the Paris Review Daily. Dinah serves as core faculty in the Bennington Writing Seminars and as an editor-at-large for The Los Angeles Review of Books.