Swaying back toward midnight, she focused on extricating herself from the dangerous last ten hours. Her body felt like it was at the opposite end of a sinking valley. A valley sinking into a muddy sinkhole where aliens who had infiltrated the Vatican were wriggling.

No, wait, that was her sister’s choreography. Whenever her sister entered ovulation, her sister fidgeted while peering at her feet and everyone else’s feet. With knitted brows, her sister mumbled about wriggling and smuggling. And infiltration.

Mumbled or chanted, it was hard to tell which, in her prissy ovulation mood, fidgeting as if about to jump out of the room.

Her sister as a child had been bitten by…something…gnawing its way through the little frown her eyebrows saved up for special occasions with relatives…she must have been daydreaming about a special occasion and tuned out the…something.

So much for her sister and the infiltrated Vatican—what she needed was to focus on her own unholy imbroglio. Fuck, that was her sister again! Her sister threw around words like “imbroglio,” especially when ovulating, when she wasn’t chanting or mumbling. Her sister had no boundaries! Other people, blanking on “imbroglio,” smiled warmly at her sister, while covertly imagining her sister buried up to her neck in an anthill.

Her sister, rolling her eyes, buried up to her neck in…a sweater knitted by the aliens who had infiltrated the Vatican. They’d mastered infiltration, but not how to size a sweater.

Just saying to herself the word “imbroglio” caused her to fidget. 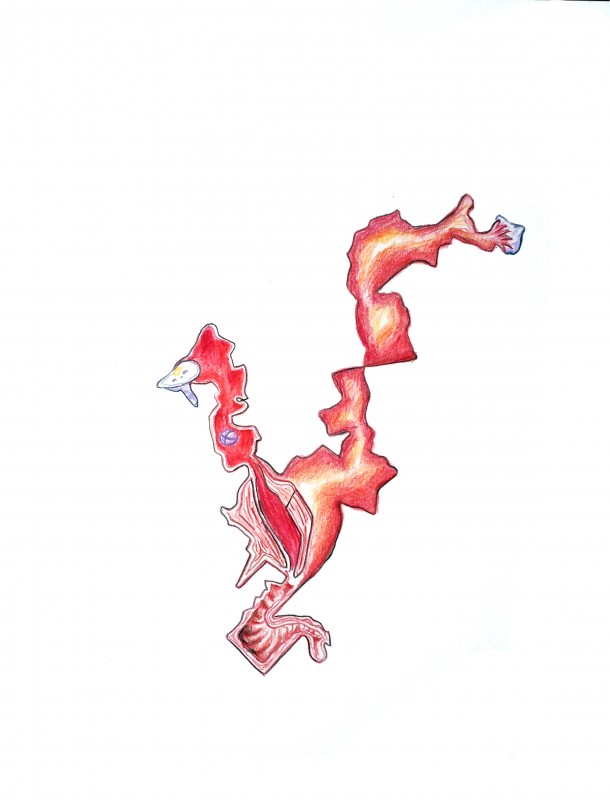 Her quota of optimism for the day exceeded, she squashed what remained of any feelings of tenderness and prepared to confront her sister.

Aliens advancing upon the Vatican broke like rollers against the walls of the food courts that surround the Vatican. No matter, the periphery had been breached.

Posing as landlords, with responsibility for the night picnics in the gardens of the Vatican, the aliens, in their landlord human form, allowed themselves to be photographed while planning. Their human forms hungered to be featured on tourism posters. Echoes of disorganized earlier picnic fiascos scorched their ears.

Laden swaying golden husks of rice—branches wheezing under the weight of persimmons—too much distraction. The human forms of the aliens needed to remember they were blocking the footpath. Onward, landlords.

In the sweltering heat they folded themselves from a great height while vocalizing inside and offered words of cheer, and praise, to recently hospitalized grandchildren.

Oh, fuck! Sprinkled everywhere within the food court were fluorescent yellow bibs, amid the banners, an awesome and at the same time gruesome shade of yellow. She smashed her elbow into a handful. That felt good and at the same time indulgent—she’d drawn attention to herself. The other bibs cowered. It sounded like they were whimpering.

Or maybe praying, she wouldn’t know, she’d been an atheist since day one. In point of fact, an atheist since the moment of her conception. Conception had produced her, an atheist, now the last best hope against the aliens hibernating within yellow bibs inside the food court. 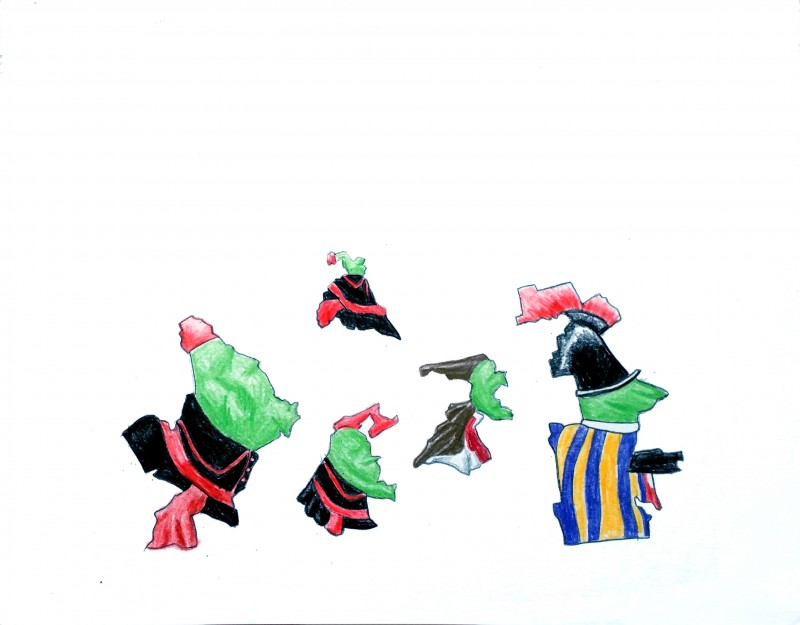 She felt like carving mushrooms into the shape of wolves, inside an elevator. Exactly the kind of recreation that her sister would devise. Her sister was a walk-in closet who gave dinner parties. No, that was unfair: her sister’s dinner parties were a charter yacht in the shape of a croquette, wait, no, the other way around.

Let her sister go about her business in the moss, envying other people’s unchaotic ovulation.

Meanwhile she brushed aside inquisitive Swiss Guards. Their mild manners infuriated her. It took all her willpower to proceed gently. She felt like whipping them with banners from the food court. A bumper crop of Swiss Guards grunting stoically while being whipped.

One Swiss Guard would not be brushed aside—kept asking questions—her bossy smirk set off nicely by her platinum bangs—inquisitive and intimidating—a wild boar deep in a beech forest was quaking at that halberd—lovely little birthmark adjacent to the smirk—but as she asked away, she fidgeted.

Fuck! Her sister had gone hardcore, infiltrated the Swiss Guards. Armageddon was at hand and now this junior high school shit. If only her sister after being born had been launched into orbit with a freezer pack full of breast milk. Unfortunately that was a wrinkle that hadn’t occurred to anyone with the power to make it happen.

But wait, it couldn’t be her sister, platinum just did not suit her sister. But then why was the Guard fidgeting and grandiloquent? Only her sister would throw around a word like “prefecture.” But platinum, it was just a given that her sister couldn’t pull off platinum.

While being buttonholed, she kept an eye on the queue for tickets to the barracks. Another given: in a queue in an enclosed space, invariably there is an ulterior motive. 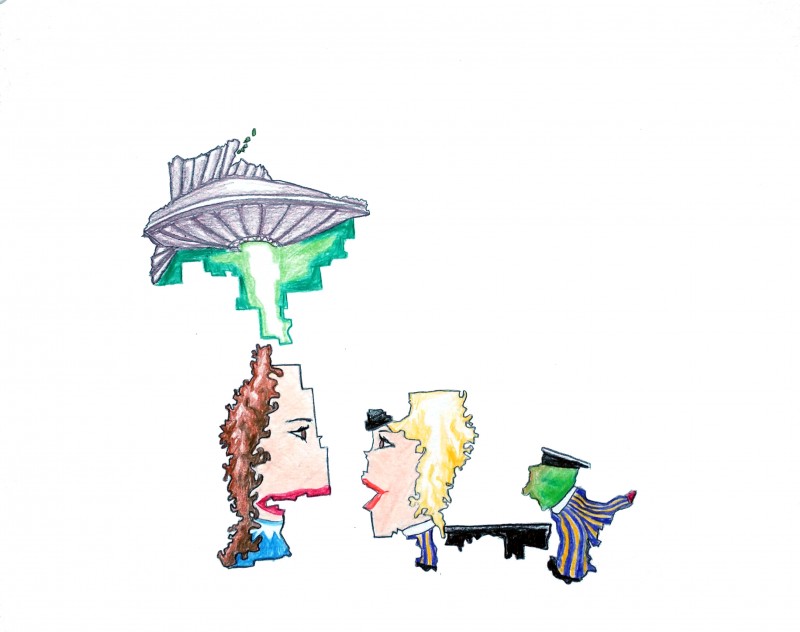 She felt sorry for everyone who couldn’t sense that trouble lay ahead. An Oberst of the Swiss Guard munched down on a fried rice ball. Incredible. The Oberst’s shift would end and she would bring home a caddy full of fried rice balls. She would nibble at them in the tub while soaping up her boobs. Unbelievable. Another Oberst came along and joined her, doubling the negligence. They’d risen to the rank of Oberst and didn’t have a clue.

Personally, she herself wouldn’t mind a long hot bath and some attention to her boobs—she would track down the Oberst and break into the bathroom—the first Oberst, the redhead who looked a little like Miranda—entwined, neither would mention failures of intuition about crises—or maybe in the fragrant consommé a barbaric scolding would be in order—the fried rice balls repeating their mantra about the decline of competence in bodyguarding—the boobs of the Oberst alive and lovable even if they never had seen combat—oh how she wanted to give nicknames to those boobs.

In the tub she and the Oberst would mercilessly plunder fried rice balls, laying waste to a stack of caddies. They would linger in the tub for days, towel off, then raid other, lesser food courts as a postscript. 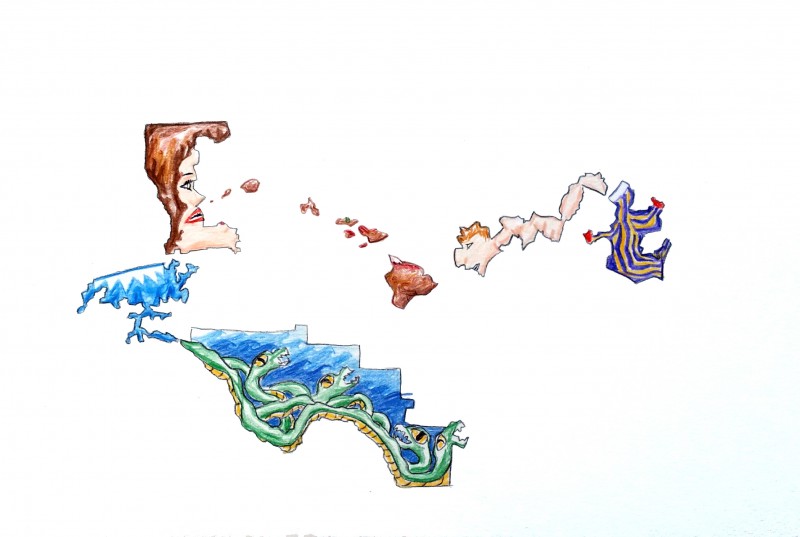 Smuggling a halberd through Customs, in August, in the pureness of an aftermath still steadily ringing—a kidnapped halberd—distracting Customs with an anecdote about a black pearl—fuck, she was too wide awake. She strangled that reverie and kicked herself for getting ahead of herself.

But still…just imagine her sister meeting her at Dulles. Her sister would expect a souvenir. Out of her sister’s mouth would wriggle the delicious word “voulge.” No amount of deep bone pain could offset the joy of witnessing her sister’s disappointment. Her sister when disappointed resembled an emptied chessboard, a chessboard cleared of its most recent happy ending.

Fuck! Nothing irked her more than strangling ineffectively. Especially when her sister was involved. Sometimes she just wanted to give up.

Sometimes…pillows…she felt bogged down by them, they nagged at her with their promise that they’d come in handy when a reverie survived an ineffective strangling.

Meanwhile aliens in human form, with human gullets, were stuffing fried rice balls into their maws, while plotting their next move inside one of the basilicas. Bingeing in exhilaration, in oblivious exhilaration, with no awareness that gluten would be their undoing. Gluten fatally incompatible with some rare enzyme made when certain aliens take on human form. Soon they, the recently ecstatic aliens, would be drooped over the pews, lifeless, brought down by the chewy texture of the fried rice balls.

If only. Fuck and double fuck. More frivolous reverie. Actually, she believed that the fried rice balls were overrated, though they were so universally acclaimed that she kept her opinion to herself. “A sensible man doubts himself when he is confident about an opinion that few others hold.”—Robespierre. 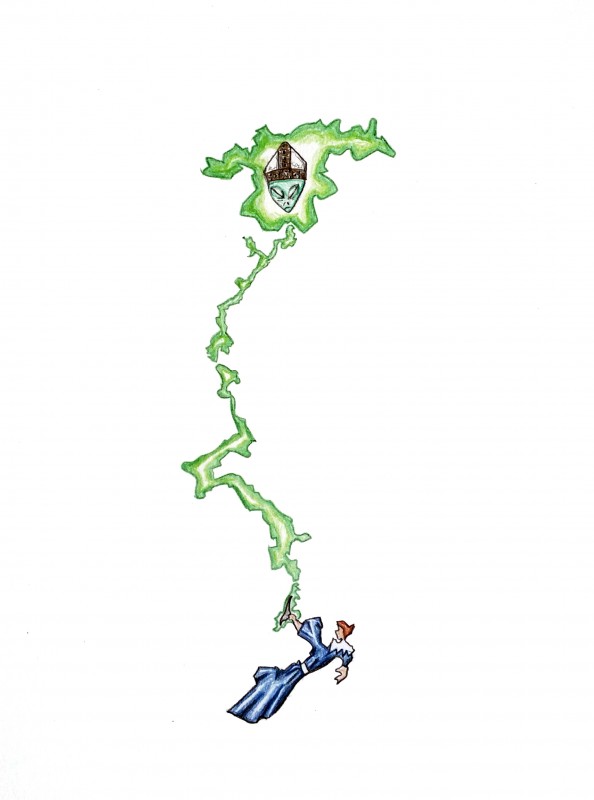 Maybe it would be best to find a basilica and swear a vow never again to indulge in fried rice balls—what a challenge that would be—walking on eggshells around fried rice balls forever—then again she could look forward to mowing down temptation—some ally with a halberd would invite her to hang out, an invitation with undertones of fried rice balls—or imagine being put up in a guesthouse that doubled as a storage shed for fried rice balls—fuck! Now was not the time for woolgathering about teetotalling.

What had scratched her face? Blood dripped onto the map she’d been reviewing before her exit into abstinence. One drop. It landed at the far edge, at the center of the helipad.

The helipad. That made sense. Aliens disguised as pickpockets were converging on the helipad. They were totally uncool pickpockets and some would be written off as losses. Some though were ahead of the curve and would make their way untouched to the magnolias on the outskirts of the helipad. Inspecting the contents of billfolds with amusement, they would await the arrival of the other aliens.

Other aliens rehearsed fearless laughter in the kitchen garden. Sighing with their arms folded, they critiqued each other’s fearless laughter. And in the apple orchards yet other aliens practiced talking trash. They talked trash by two-way with the aliens disguised as infantry, who’d paused to shed their black cloaks beneath an underpass. Trash talk that played on the word “autorotation” echoed in the crowded shade of the underpass. 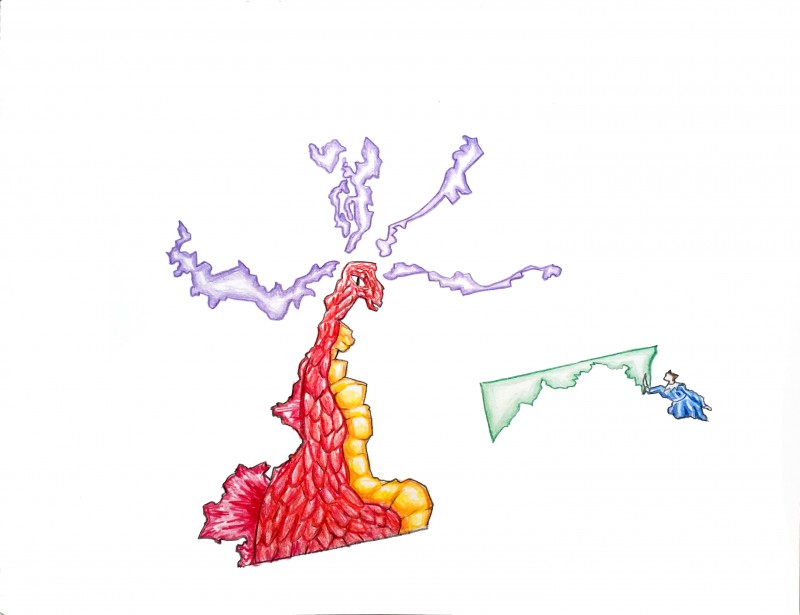 She hunkered in a roped-off grotto, the grotto vandalized by aliens who hadn’t made the grade. Instead of human form, they would live out their lives as dandelions…had infiltrated by weaving themselves into the flaxen hair of moms from Saxony…their milky latex, not the usual milky latex, seeped into tiny crevices in a Madonna and in a few decades would wreak havoc.

Keith was married! And Swiss Army. He put a finger to his lips. From his finger rose the scent of rosemary that he was nuking in the microwave.

A disliked Oberst muffled her sad gaze of resentment and shampooed proactively against scurf with an infusion of rosemary. Her annoying optimism that afternoon would be viewed in retrospect as especially annoying. A future blessedly free from scurf awaits some of us, not all.

Overnight, one night the week before, a stall in the food court had transformed itself. Now it featured fried sliced milk-caps, fried in their own orange-red milky latex; a perplexing transformation; under other circumstances, a frustrating and annoying transformation.

Her sister drank her first rosemary tea of the day and it had its usual effect: she got all wobbly and became a mansion of regret in which she wandered aimlessly and wobbly.

A turbine engineer, her desk a monument to milky latex, left her desk when she heard the commotion. Because she was away from her desk, she missed the fuss about a bouquet of quillwort.

Philatelic specialists around the world, be patient. The sprig-of-rosemary postage stamp may yet be released. Same applies to the stationery and postcards and aerograms in the series. 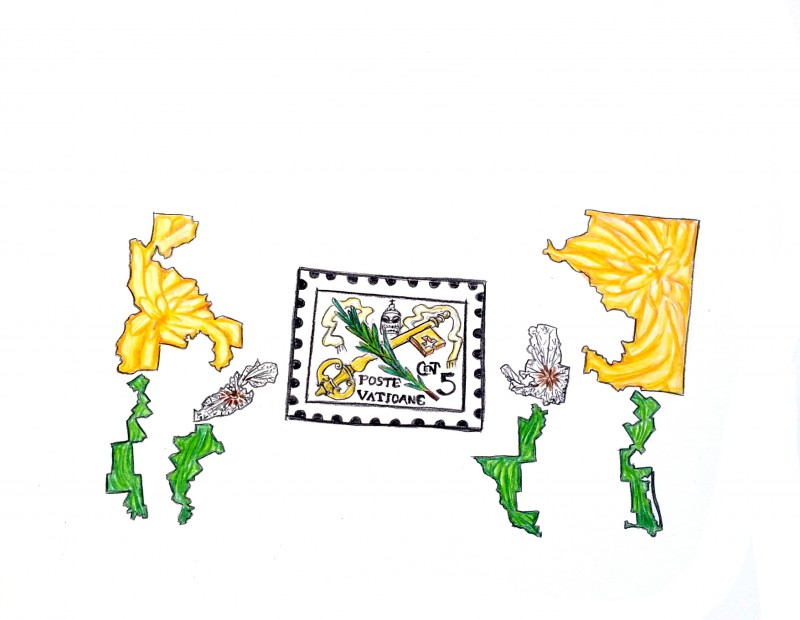 Zaq Landsberg specializes in large scale, site-specific sculptures, absurd objects and potentially treasonous conceptual projects. Much of his work involves things that look like other things. He is the Founder and Head of State of the Republic of Zaqistan. Originally from Los Angeles, CA he lives and works in Brooklyn, NY.