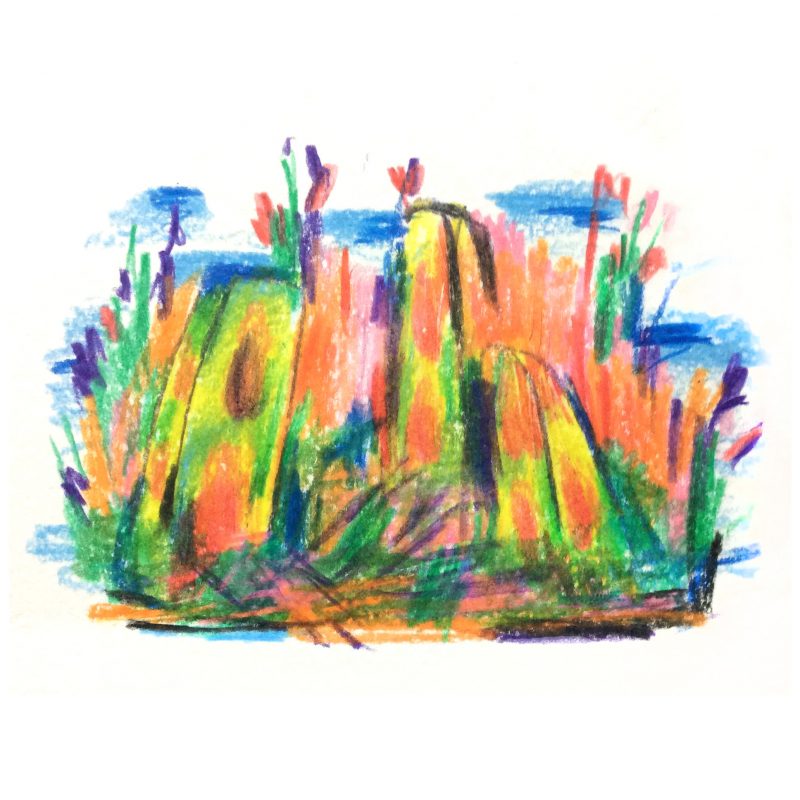 God’s acre, they call it. A burial ground. A graveyard. A necropolis. A place where stone rises in jagged memorial. Where thistle, crabgrass, ragweed, purslane, and lambsquarter grow unasked until stems spiral and leaves burgeon to such an extent the names of the dead can longer be read, the dates of birth and death are annulled. Rain falls upon this lonely parcel, transmuting the stillness of packed earth to the slick nebulosity of mud. When the sun returns, it burns hot and sharp, browning grass, baking stone, calcifying mud mid-metamorphosis so that dirt is made barbed, bulbous, and arched until finally it—the entire element itself—adopts a grim demeanor. A fence can be discerned along the perimeter of this decay, the stems of weeds seen here to spiral among its chain-link. Beyond this fence, a thoroughfare traversed by the same three or four dilapidated autos. None stop at this forgotten funerary and so, in time, the phantasmal makes itself known, as indifferent to the eyes of the living as the eyes of the living are in return. No, it is not the spirit of the undead that appears. It is the specter of long-lost memory. The shade of unrealized thought. The red vapor of unsated desires. The blue mist of long-gone anguish. Yes, this cemetery is haunted. Haunted by a phantasmagoria of the mind. 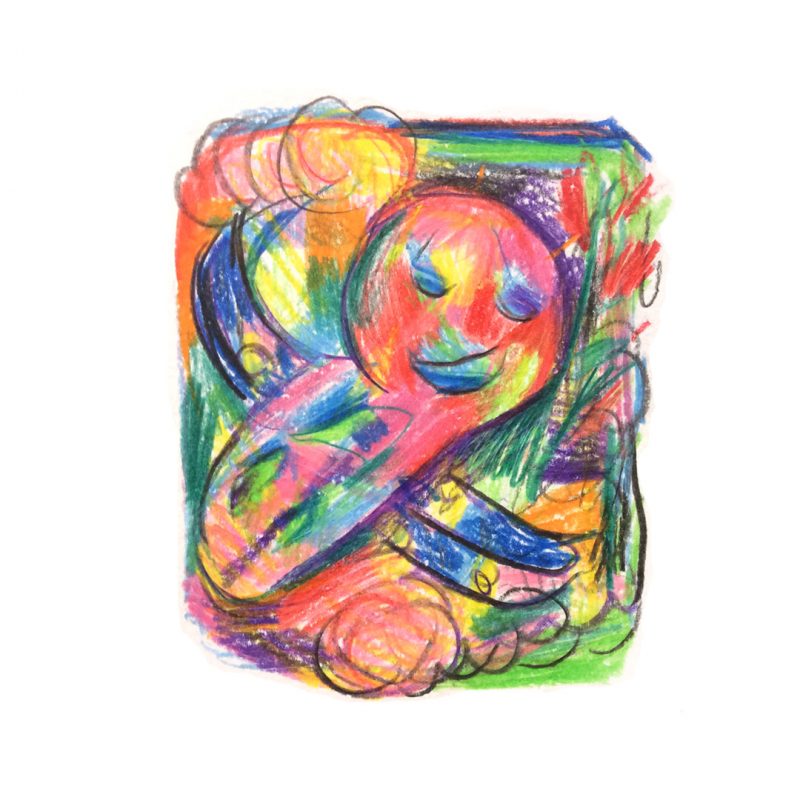 Here, the neural has been reborn, induced by the sheer force of rekindled chemical to cross the expanse of a synaptic cleft so fathomless it is like the waters of the Styx. It is induced again and again, a transmission from the domain of the dead to that of the living. Yes, even the brain was once its own boneyard, ground where only suffering and sacrifice was known, a barren hill upon which crucifixion was not uncommon. Now the brain is become revenant, portending a fate of continuation. Cells are reawakened, aglow with the miraculous phosphorescence of rapid electrical impulses. Within this phosphorescence, thought is reformed, a dazzling array not unlike that of the holy. Is resurrection too strong a word? Not for this it isn’t. Thought is sent aloft, not quite solid, not entirely immaterial. What a glorious thing to behold, this apparition of the intellect. Unbound by body, it cannot be made wet by rain. It cannot be burnt by sun. Winds cannot deter it. Night does not bring rest. Its flight shall only end once that which it seeks is spied. Only consciousness can return thought to the earthly realm. 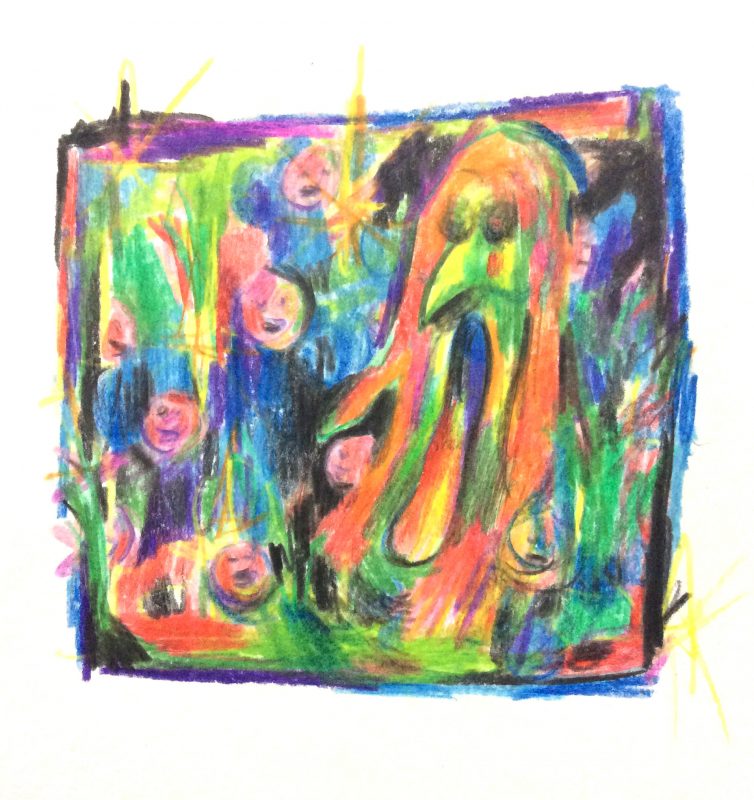 A woman, asleep upon a mattress on a bare wooden floor. A mind, momentarily unburdened by the full weight of existence. A psyche upon which thought can descend, affixing itself in such a way that the material of dream is made to flutter and whip and unfurl its true length like precious fabric forgotten on a clothesline in the midst of an unexpected storm. This fabric’s dyes begin to run, red and green and blue and yellow rivulets falling to the grass below in vivid deluge until candy-colored stems, like that of kaleidoscopic seedlings, are made to sprout. These are not really seedlings, however. No, they are the brightly-hued handles of plastic shovels, pushed to the hilt by the hands of children into the ground—ground that is no longer grass but sand. This is a beach and the plastic shovels have been arranged in rows as if in garish memorial to some cause known only to the waves lapping upon the shore. The woman is there, stooped in vague remembrance. Her hair has become thin. Her skin is creased and sallow. Her lips droop as though from the heft of unsayable words. Behind her, her grandchildren squirm in impatience—but she, the woman, has no grandchildren. She is, in fact, quite young. She wonders how she has come to find herself in such a state as this. It is then she awakens from the dream and thought is sent aloft once more. 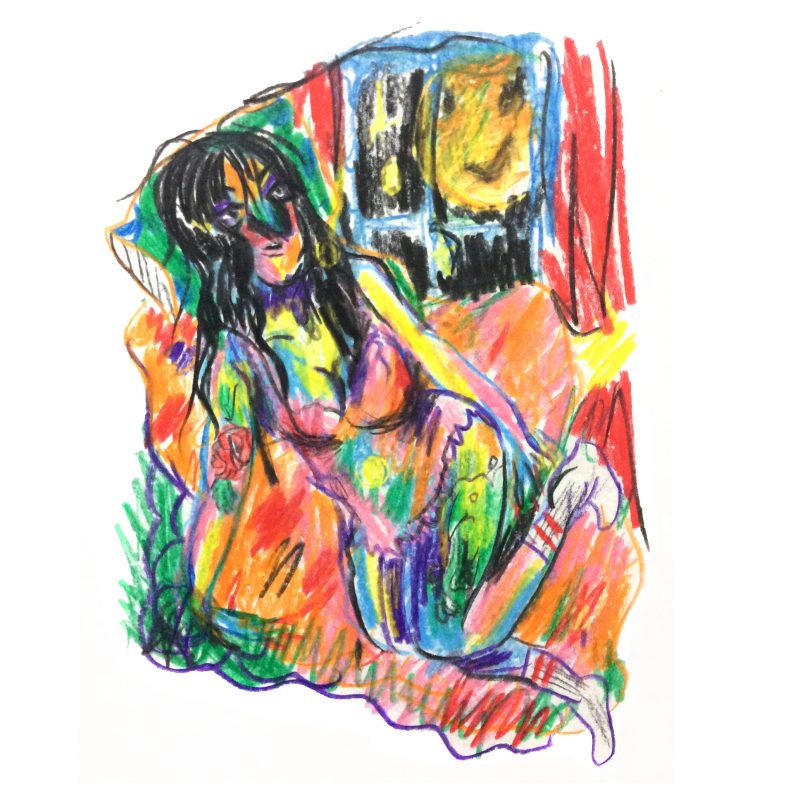 Dream seems more akin to reality than this, a mattress upon the floor of a desolate room in a house shared with three strangers. The grief felt in imagination’s absolute is far more acute than whatever it is she feels now upon waking: Exhaustion perhaps. A kind of apathy. A sorrow of a different sort altogether. She longs for the longing that pained her so within the ever-shifting confines of abstraction, a true and potent sensation she cannot conjure on her own. But what specifically was it that she was dreaming of? Thought’s shade flits above, darkening into obscurity, then briefly revealing its luminosity, then darkening again. As the minutes pass, dream’s distinction comes to be dismantled in the brain’s effort at actuality. A window is seen and the brain must name it. A bookshelf, overstuffed by old paperbacks—this is seen and named as well. So, too, is the mirror on the back of the closet door. The brain is but a laborer of logic whereas the mind strains itself under the exertion of the implausible. The woman knows this. Even as she sits there amid the sheets, she knows this to be true. It is then that the thought returns, tethering itself to the woman’s sentience. Now the woman understands the point of the dream. Now she understands there is only this and this alone: Oblivion. 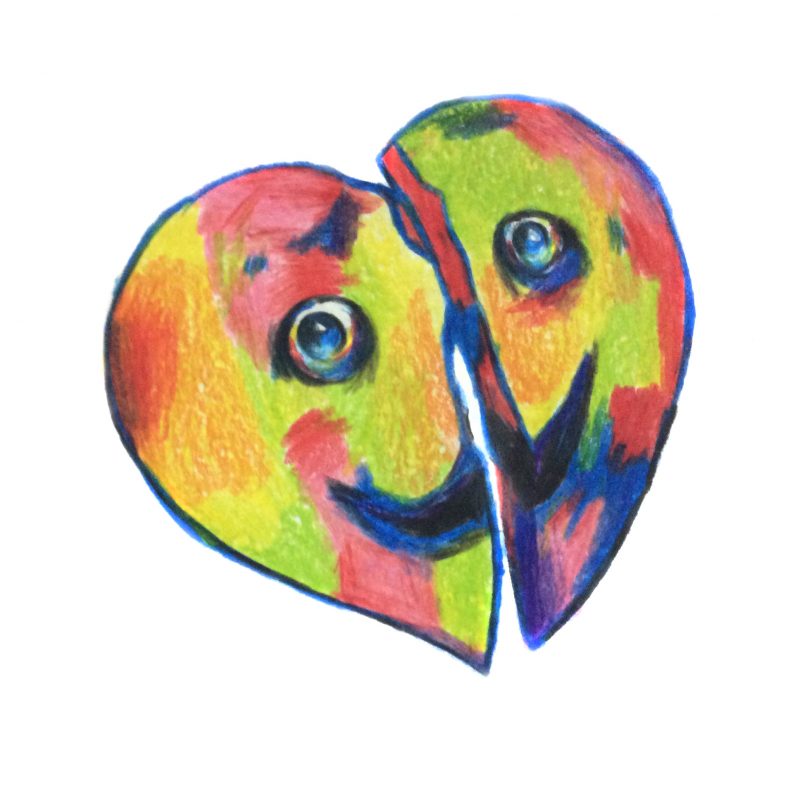 That she should have ever forgotten the stark fact of death now seems somehow ludicrous. Should such a thought not be so constant it is like a state of being, experienced not merely as an impulse of the brain but throughout the entirety of the body and still further to the distant corners of consciousness? Should her heart not hammer in terror? It is currently doing just that. Should perspiration not bead upon her skin in dismay? It most definitely is. Should her mind not reel at the very idea of nonexistence? Oh, how it reels. And then, just as abruptly as it came, so goes the thought of death’s grim guarantee. Relief loosens her limbs, her shoulders, her neck. Her heart’s hammering lessens. Her mind no longer reels. That she should ever need ponder her own demise now seems somehow ridiculous. Sunlight, eager and existent, blasts through the window and annihilates the seeming decrepitude of her confines. Outside her door, the voices of roommates can be heard, energetic and alive. A slight smile parts her lips with the knowledge that for now at least she exists. As for the thought, it has been sent aloft one last time, expelled now from this planet’s atmosphere. 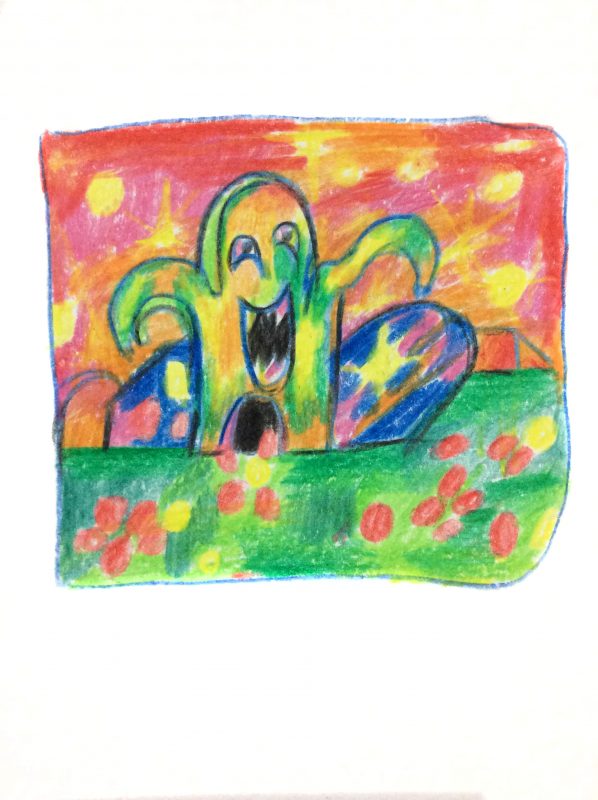 Yes, Earth’s exosphere is like that of a pre-synaptic membrane, the expanse of outer space like that of a synaptic cleft, the crust of the red planet like that of a post-synaptic receptor. So in this way transmission is made from one celestial body to another—and to another, and to another still. Yes, the stark fact of death has breached the far reaches of the cosmos. Here, upon a rocky planet beneath the star shine of Proxima Centauri, it arrives. It imbues the newly-evolved inhabitants—still largely formless in body and in purpose—not only with sentience but with the knowledge that such sentience shall one day be stricken. There, upon the surface of the circumbinary planets orbiting the Kepler-47 dual star-system, are the great ruins of a forgotten civilization. Pyramids of stone pierce the thinnest of atmospheres, their structures shifting towards further dilapidation as first one block and then another crumble in craggy decay. Below, giant canals crisscross one another like the ragged scars of the terrestrial. On the banks of these canals sit jagged tombs housing the monumental bones of the giants that once traversed these bouldered heights. It is upon these banks the phantasmal makes itself known: The specter of long-lost memory, stark in the haze of twin suns. The shade of unrealized thought, stretched near to infinity across this battered dominion. The red vapor of unsated desires. The blue mist of long-gone anguish. Yes, thought is reformed, a dazzling array not unlike that of the holy. It is induced again and again until the stark fact of death is broadcast to the universe’s most intangible latitudes. 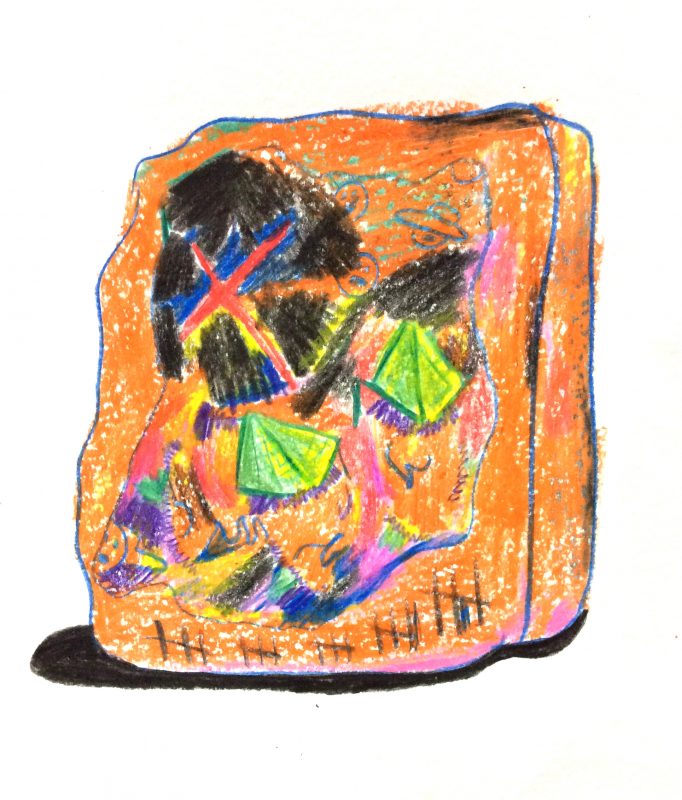 Death scatters like interstellar dust particles, suffusing the hydrogen, helium, and other ionized gases comprising the long vaporous pillars of nebulae. They are each one of them—the Orion Nebula, the Helix, the Horsehead, the Hourglass, the Cat’s Eye, the Owl, the Dumbbell—a contorted memorial to the white-hot fluorescence of the stars that can be spied within their mist and that soon will die. Yes, even the stars shall die, collapsing upon themselves under the awful weight of gravity until supernova is induced and a monstrously luminous explosion occurs. From this explosion death is scattered still further outward—along with the remaining particles of ionized gas—so that in time all become clustered together again in dusky array. Pillars spiral forth in an unthinkable act of creation and a new nebula is born. From this nebula’s density a star forms, gravity balanced for now by the astronomical pressure of the nuclear fission laboring within the core. It is like a brain, this core, constituted solely for survival’s illimitable impulse. But remember, death still suffuses the celestial architecture of rebirth. This star, too, shall stretch beyond its bounds, collapse upon itself and be no more. Knowledge of such a fate is experienced throughout the entirety of this cosmic body. From deep within can be sensed an immense pulsation. Is it a neutron emitting beams of radiation? A deep space radio burst? A solar flare? Or possibly a colossal heart hammering in terror?

Alberto Perera (Barcelona, 1989) is an artist based in Mexico City that explores identity creation through performance and other disciplines. His work (sometimes collaborative) has been seen in places such as Vernacular Institute, Aeromoto Biblioteca Pública, SOMA, Nottingham Contemporary, and Centro Cultural España de México. He has collaborated with artists such as Pia Camil (MEX) and Val Lee (TW), among others.

Stephen Langlois is a writer and photographer living in Southern California. He is the recipient of a NYC Emerging Writers Fellowship from The Center for Fiction as well as a writing residency from the Blue Mountain Center. His work has appeared in Glimmer Train, Joyland, Lit Hub, Hobart, Barrelhouse, Yes Poetry, and Split Lip Magazine, among others.