haunt the bathroom — haunt the stair napped
pinkly with carpet and departing sun, up at the top
a room with a lock and a mirror that when angled
into other mirrors’ eyes can see millions
all those faces falling into darkness

when I miss that rabbit hole I hop
to a bottle, sink for days into the smash
and rattle of glass, the disappointed trundle
of the Wednesday garbage truck trailing its
pestilence, god damn

it’s low to wake alone
and blankly — got halfway packed into the small
blue suitcase, ready to be told to go
but hey, hey, you do it, too: stoop down
almost to gutter chasing after some stray shine
I thought it was a nickel or something to wish on

a million copper pieces in the well
poison the water, but two men let him drink, watched him
die, writhing in fractured sandstone, leaving only bones
and a legend, so a million people visit
the sizzling hardpan where he’s said to rest

oh heavy friend, I can’t call you a ghost if
I can’t call me living, we sit beside each other
on a midnight bus, but do you know me
will you turn to shake my hand, your breath
violent with ammonia, rock dust on your gums

always chewed the fat better with invisibles
all that talking to tiled walls got me tuned
to echoes, to the bitter silver taste of stars
ripped unripe from the sky 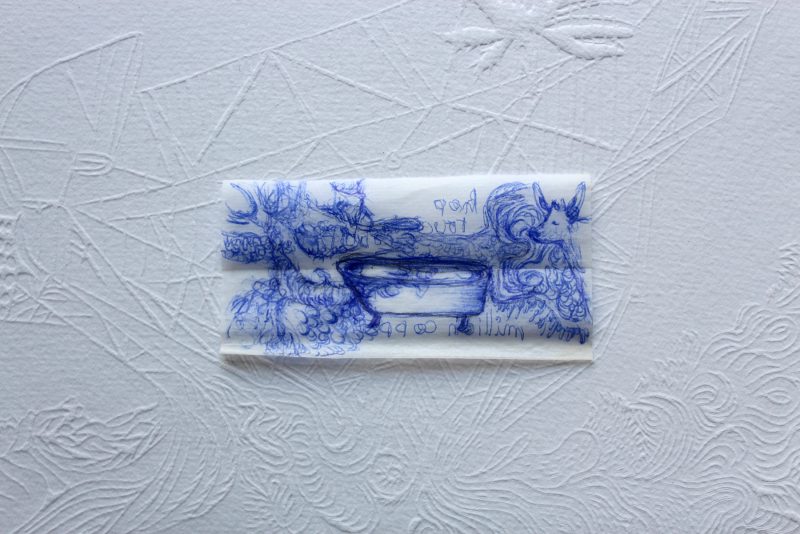 Come out of the water into an unknown country
I’d been lost in the book she gave me — a love letter, I thought,
a deep well — I dove quickly, greedy for the words
In the pages a painting suffused with blue, gods and women, and infants,
and heroic animals all blooming in the color of sky
the color of wanting, the color of her eyes

How blinding it was to be welcomed like this — reading what she had read,
as though we walked side by side, close enough to touch
the painted pasture and its flock, the women’s silks in disarray
A slow unrolling, sweet as glaze, and sticky
(she smells like pine and olives, on my sheets, on the robe she borrowed
for the morning to eat eggs bare-breasted in the sun)

Then the last word passed — she didn’t call — I sit and drink coffee from a mug
etched in blue. Too many spaces to form the other,
coaxed by fiction, by habit, to build a person out of air or ink
to paint that current of desire thick and richly (in best Venetian azzurite)
this one will know how I need to be held
this one will know how wildly I long for home 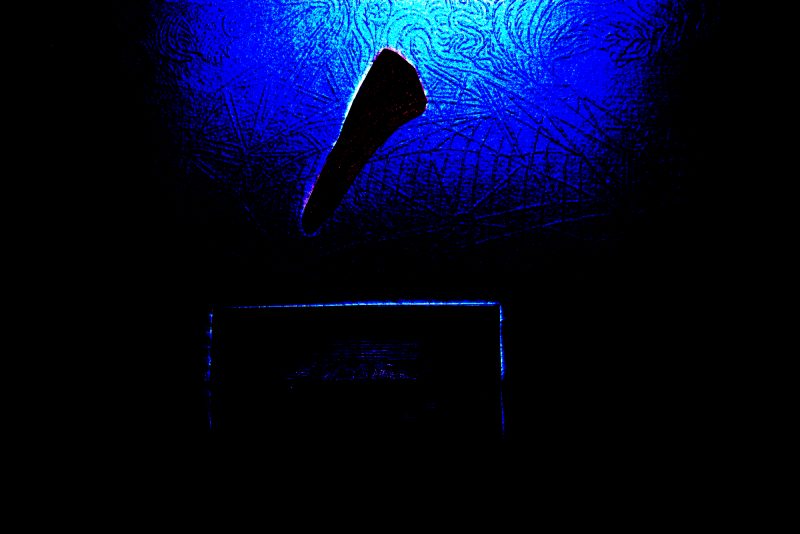 The ambulance a brick of light through the midnight window. It’s come for the neighbor across the road. An old man, maybe? I don’t know. I don’t know anyone’s names on this street, or their faces.

— my father loved the pedal steel guitar, and the last time we spoke a song was playing on his end of the line, stringy twang, a man’s voice oozing sweet as my father said his flight to London might be cancelled due to snow, real shit weather, he said, and I said, Dad, there’s something I want to tell you about, before I visit for Christmas, there’s someone, and I told him and he said nothing but the man and guitar stayed on the line so I knew he was there, until he wasn’t —

The ambulance stops flashing, goes dark. My eyes hold its shape, its skitter of colors, in the frost-laced glass. Was it a false alarm? Or maybe they’re too late. No one to barrel down the highway for, now, no one needing that siren. Time to take it slow. Just a quiet drive in the strangest hour. The subterranean hour: low yellow glow of streetlamps, everything iced and sharp and sparkling, like a cave coated in crystals. Like the inside of a geode. So pretty it would stun you, and when you fell to your knees the little quartz points would pierce your skin and start the bleeding.

Snow on the glass. The ambulance still there, like it’s sleeping. 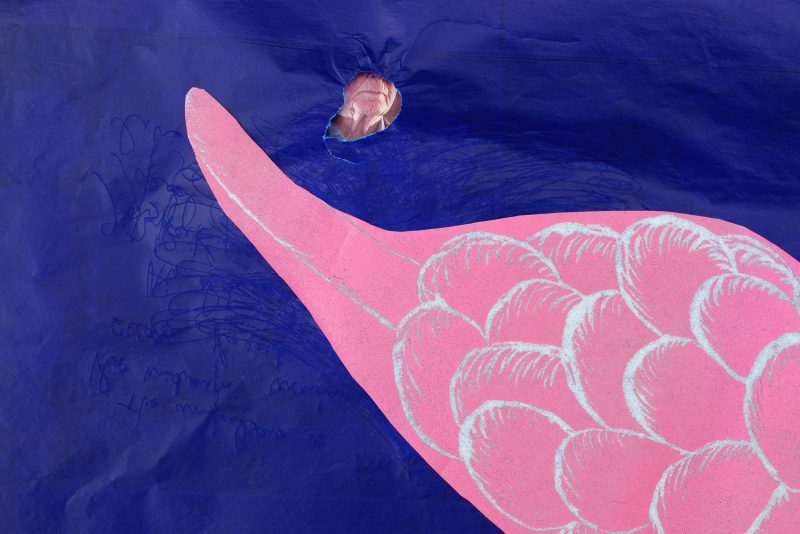 When I returned to California there were fires, there are always fires, nowadays, and sunset to the west over the plane’s gleaming wing was pink, flamingo pink, bubblegum pink, neon pink, all that ash and carbon monoxide glittering hotly out over the sea. I was flying into the city and then driving into the desert to visit a park in which there was a well I’d read about in long-ago book. Not a well; more of a spring. Not for drinking; the water was clouded with acid. Older accounts spoke of a scummy pool surrounded by small furred bodies and bits of sun-bleached spines, but it was the only spring in a vast stretch of rock and sand and sun and anything that looks like water will do when your body is burning up from the inside, I imagine. (I don’t like to imagine this, but it happens, the imagining.) In another book a man survived a shipwreck by waiting ten days on a rock covered in nesting birds, and he drank whatever water collected in hollows though it was thick with guano and old grass and feathers and he thought he would die from the taste, but he lived, he was rescued, though that was just a story. Maybe the well was just a story. Sometimes I can’t separate fact from fiction, in the same way I can’t say whether certain memories are dreams or if I actually lived them. Did it snow, once, at our house in the suburbs south of Los Angeles? In that house, in the hall, did I see my father touch my mother kindly? Rub his thumb, gentle, over the nape of her neck. Is tenderness only a story we tell ourselves? We landed just after dark, fires all around us. 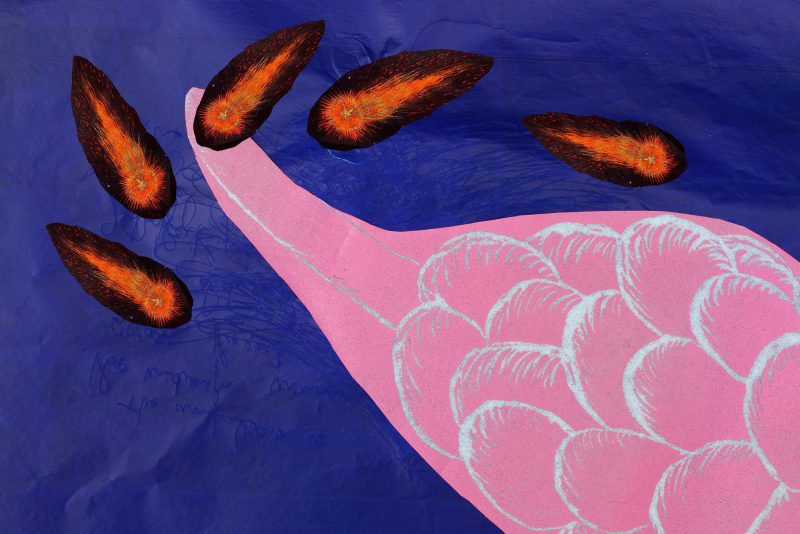 There are more books in the small blue suitcase than clothes. What was I thinking? I still pack the same way I always have, out of panic — a last-minute scramble, late for the airport, somewhere in the back of my animal brain the old memory of my mother slamming through the hallway, opening each emptied closet and commanding me through gritted teeth (when my mother locked her jaw while speaking I knew there was bad trouble) to put some things in a bag because he’d left us and I had to go away for a while.

My suitcase sits in the corner beneath a painting of wildflowers. I have five novels but not a single sweater because California is always hot, except in this yellow-walled room where the thermostat is set to a baffling 60 degrees. When I arrived at the hotel there were three police cars and an ambulance parked outside, but no one at reception said anything about it, no one even looked at the cops milling in the lobby filling cups with free coffee, their radios squawking like parrots on their collarbones, the EMTs nowhere to be seen.

I’m halfway unpacked when she calls. I forget the sweater, climb into the bed. We talk a while about her day and my flight and I think of our bodies curled together, soft, of pressing kisses into her shoulder blades, of the way she says goodnight. I don’t say, “I miss you,” because I just left, but I think it. I mean it.

That night I dream of my old house, my old bathroom, where I would put two mirrors together and poke my face inside that dark blue world and see other me’s, and say hello, and believe I’d found a way to never be lonely. 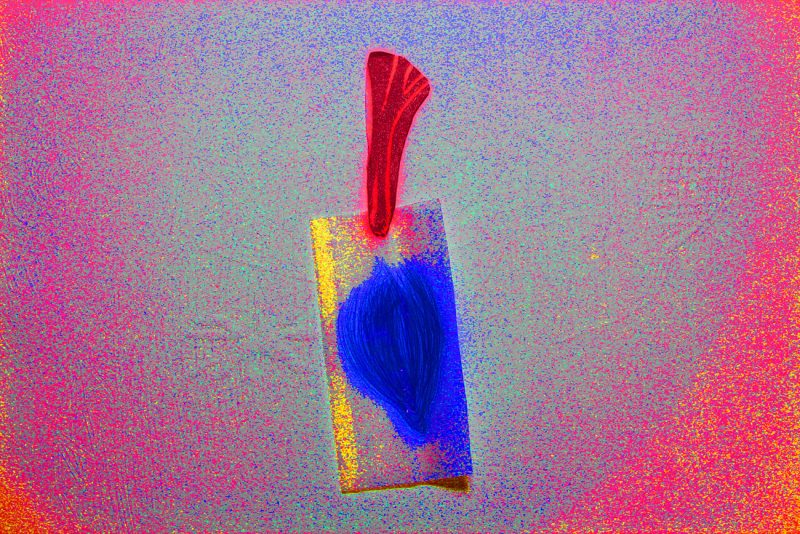 Signpost in the sand. Blood-orange ocotillo flowers flaming against a wide-flung sky. I’d chosen a budget rental car to save money and at the heart of my trip — in the rocky washes of the Colorado desert — I follow the spider-web lines of a map to this:

I turn onto the dirt road. I came all this way. Just a little farther, I tell the low-slung car, pressing the gas. There’s no one out here, in this middle-of-nowhere park. No cell reception. The tires hiccup in and out of sand. If the car gets stuck —

Just a little farther. I’m almost to the well.

What is it about this place that calls me? A passing incident, hundreds of years ago. Three nameless men turned on each other, turned to three heaps of bones on the blistering trek west. Did they drink the poisoned water? Fire their pistols? Was there gold to snarl over or madness brought by the sun? Or only their road ending, slow. I imagine them enemies. Then I imagine them companions, stunned by the twist their story had taken. I imagine one touching another on the cheek, wistful, while they looked up at the ocotillo blossoms among the thorns, and the third man sagged to his knees in the sand. I imagine they spoke of home.

Can we go back?
No.
But I remember it was sweet.
It was, friend.
I thought this would be green country. I thought of grasses.
So we were told.
I wish I’d brought a wagon-full of water I wish I’d packed meat the color of these flowers I wish I’d written my name on a slip of paper and sent that along this road with you, instead of my own self.
So you wish us dead?
No. Who then would carry me? 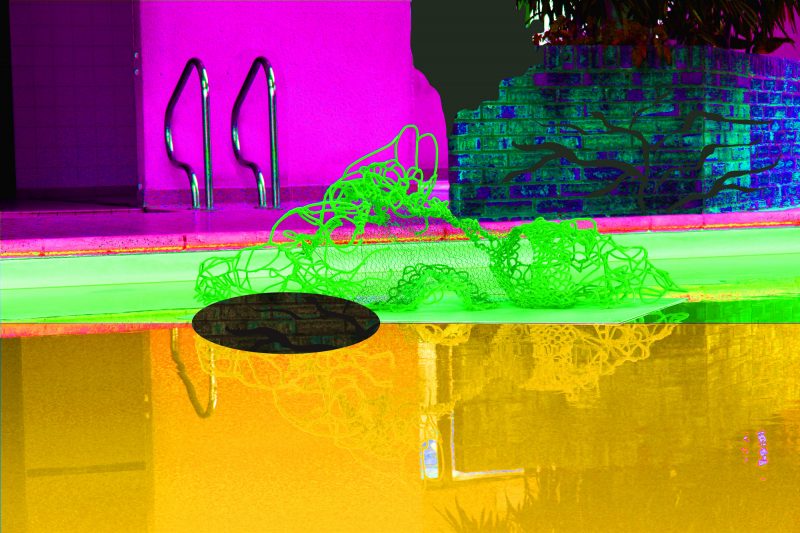 I am standing at the edge of the well and
it is dark and yellow
it is filmed with sand
a single twist of green vine floats half-submerged
there are no bodies at the waterline, nothing to signal danger, only birdsong in the desert willows and twitching insect hum

I am standing at the edge of the well and
my mouth is dry
my lungs hot dust
always fires, nowadays

I am standing at the edge of the well and
I miss my father
I have never stopped missing him since the day he first disappeared
I can’t go back twenty-seven years to say please don’t go because we’ll never be able to come back to here, back to the place where things feel safe and I don’t have to worry every day that you will leave me, that she will leave me, that I will leave with my old blue suitcase just to beat you, and you, and you to the punch 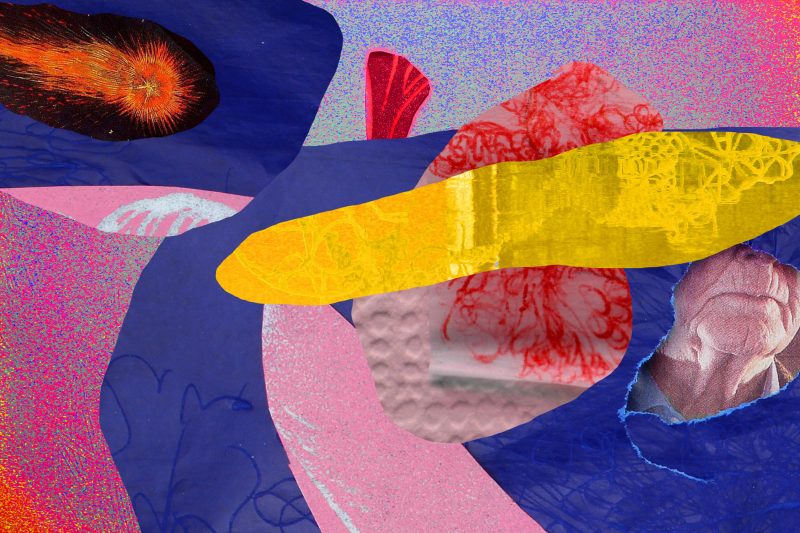 Katrina Carrasco is the author of the novel THE BEST BAD THINGS, out this November from MCD/Farrar, Straus and Giroux. She holds an M.F.A. in fiction. Her short stories have appeared in Witness, Post Road, Quaint, and other journals, and her nonfiction can be found at Autostraddle. She has been awarded residencies at Yaddo, Blue Mountain Center, I-Park, Jentel, and Willapa Bay AiR, and received a 2017 Grants for Artist Projects award from Artist Trust. She lives in Seattle with her two dogs.

Marie-Noëlle Deverre lives in Normandy, France. She mixes engraving with her installations, her performances, and her textile sculptures. These creations appear as mutating re-shapable environments that put desire and frustration into play and bring childhood fantasies up to date. Her artworks have been exhibited in France, the United States, and South Africa; and her engravings have appeared in journals such as Arts and Crafts of the Book, Mecanica, and Actuel de l’Estampe Contemporaine. She is part of the contemporary music ensemble Offrandes as a visual artist.