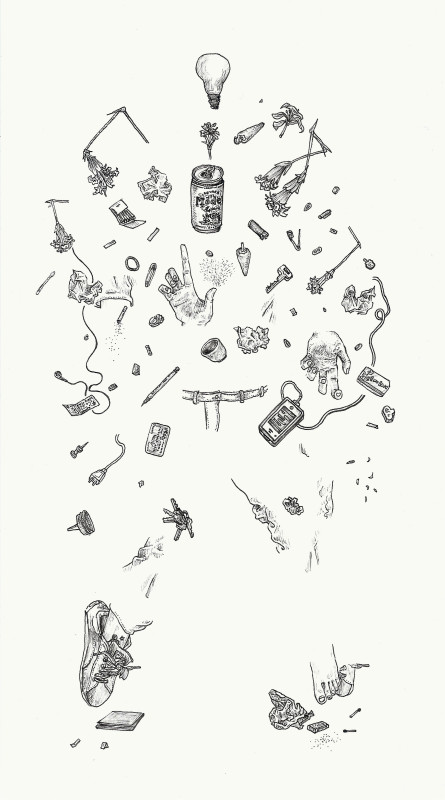 Predicted, yet still surprising, a heat wave had arrived in the city. It brought with it many inconvenient phenomena: the merely summer-sauna catacombs of the subway became completely unbearable, like trying to stay alive inside an oven; the cabbies seemed to become even more impatient with the honking, they simply collapsed on the steering wheels when their hearts succumbed to an especially violent beat; and the rats, why the rats climbed out of their little apartments in the walls and congregated around the air-conditioners, as if listening to old-timey radios.
This was happening in Adam’s apartment, too. In fact, who knows if it happened in any other apartments. Adam, unlike the rats, was brought up to respect people’s privacy. Not that he didn’t want to know. But for now, he didn’t know many things.
The heat wave. Just like alcohol, in addition to making some things awkward, it erased–or at least wobbled–certain boundaries. People sat closer to each other in cafes, not minding the occasional elbow-touch and thigh-swipe. Everyone looked like they had just gotten out of the shower. There was no hiding from the sweating, lickable faces. We are naked underneath our clothes, the bodies proclaimed. Adam felt that now he could kiss a girl, a complete stranger, if she lay in just the right kind of position on a patch of grass. If only he didn’t feel so discombobulated, so “at pieces.” For his body was affected by the heat wave in a different way than his mind. His mind was drunkenly brave. His body, however, seemed to have thrown vestiges of itself to all ends of the subway lines. When he sent a sexy, daring message to one of his fingers, the train was very slow in departing. 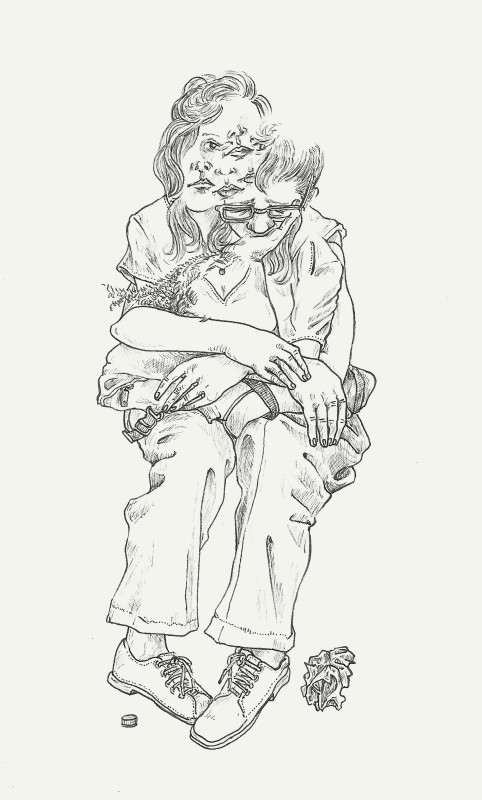 Riding the subway in the summer made Adam sad, particularly if he was returning home tipsy, and especially if drunk. It didn’t matter what comradely and punful fun he’d had out with friends. The moment he descended the panting steps into the subway, he felt he was entering an aggressive confessional—he had no choice but to feel and think the truth. That made him vulnerable, and sad.
He observed his fellow travelers sprawled on the hard orange seats. The couples making out in almost rude disregard of the harsh, pore-illuminating lights overhead; the drunken men arguing down into deep, foreign Brooklyn; the occasional well-dressed, serious lady snoring out of her mouth. These personages were certainly not aware of Adam’s inner turmoil; they didn’t care at all.
Except one person. One night. Adam was riding the subway home, in a tipsy state that leaned toward oblivion, beating himself up for breaking Magda’s heart—intentionally—when he looked up and saw himself in the person sitting across from him. A twin! A double! His heart accelerated, then screeched along with the stopping train as his eyes pulled focus, achingly, and he realized that, in fact, what he’d seen was simply his reflection in the window. The person across from him was not another him, but a very sad girl. She had long, curly hair, and she was rather hunched over, as if hiding something snug against her stomach.
The moment she noticed that Adam had noticed her, she swung herself across the isle. She didn’t unhunch. She sat down next to him—their thighs rubbed, as they should in the summer—and said: “It’s okay. Magda has met someone new, and, anyway, one day she will write a book about you. Not a very good book.” 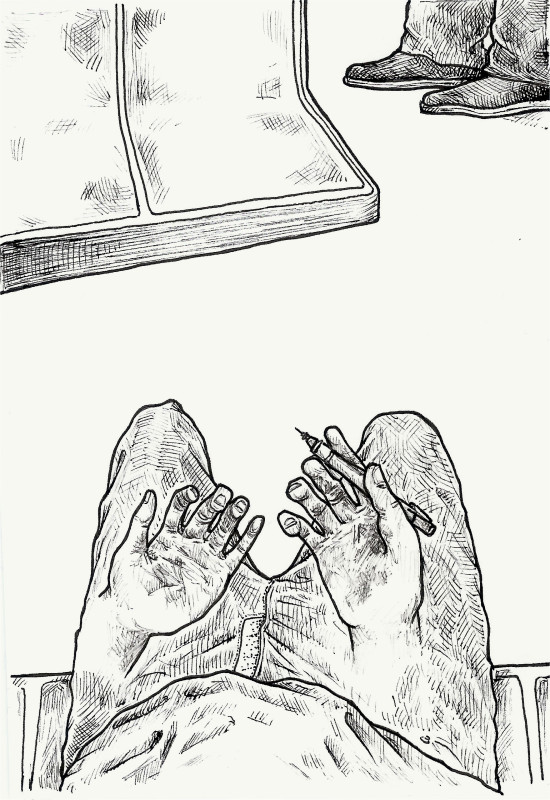 A funny feeling fired up in Adam’s thighs as he’d heard this. He thought that because of the way Magda had acted before he broke her heart entitled him, not her, to write a book. The book. But those kinds of books were always so boring. No wonder hers was already bad, even before having been written.
Wait.
“Wait, how do you know?” Adam said as he looked up from his thighs, which were itching in a strange, altogether new way. But the sad, hunched-over girl was already gone. He hadn’t even noticed the train stopping and starting again.
What else did she know? He was not afraid, he said to his thighs and—I swear to god—they verbally agreed. 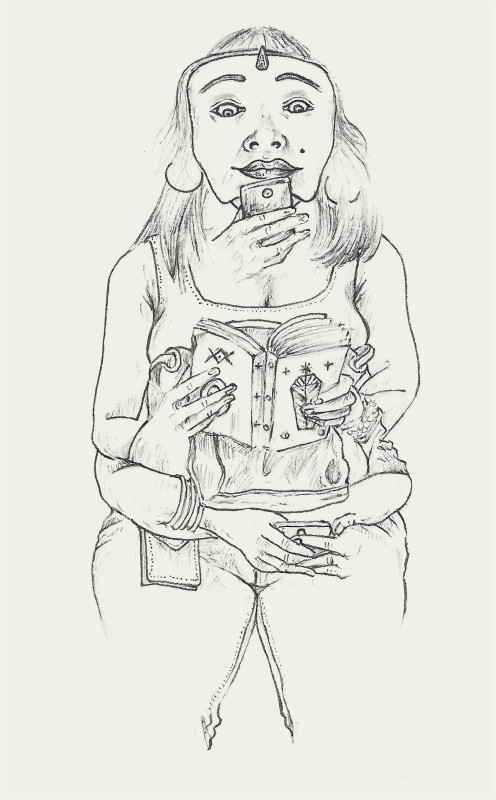 The next day Adam took the same train at the same time, or as close as he could approximate such an experience, in hopes of seeing the sad girl again. He didn’t see her that first night.
But the spirit of her was definitely present. He felt as though messages from her—or, rather, her versions of his future—had accumulated in the plastic corners of the subway car, and under the sticky benches, and on the grimy poles, and flew at him in discrete packets, every time the train stopped.
Your dog will love you more than your wife.
You father will travel around the world and decide to settle in Greece.
Your mother won’t follow him there.
Your job will involve planting trees on a thousand rooftops.
You will die near a tree.
Then the train reached the station where the sad girl had gotten out the previous night, and the future predictions bombardment ceased.
Adam was in the puddle, completely melted under the pressure of the future. He barely made it home that night, stopping to catch his heart at every corner. The girls in rompers looked at him, intrigued. Perhaps, they even wanted to kiss him. But he was no longer interested. He might as well start looking for a dog, he thought. The dog. His only comfort.
The following night Adam took “the same” train again. What could happen? He already knew the worst, he thought.
Again he didn’t see the sad girl, at first. But then he saw someone who didn’t look like her, but was definitely her. He didn’t know how he knew. He flew at the fat circusy-looking lady who was reading a book and blabbing on the phone at the same time. He grabbed her soft throat.

The blabbing woman’s throat was strange, barely a throat at all. Adam’s fingers sank right through it. He looked at his fingers in horror, expecting blood and tangled veins. But there was nothing; no, not nothing—there were traces of spiderwebs. The next moment he looked up, the throatless woman was gone. In her place sat Magda.
Adam’s heart tolled, and he jumped back. Magda smiled, smug in the effect she’d always had on people. As usual.
She looked much different from the way Adam remembered her, but he couldn’t quite put his finger on the difference. Did she look younger or older? More beautiful or less? Why had he dumped her anyway?
“Don’t be scared, Adam,” she said and giggled. “Really, it’s like you’ve seen a ghost.”
It was her hair, her hair was different. It had a glowing, whitish undertone—but not like an old lady’s. It was still young hair.
“Have you started your book about us?” Adam said. She was beautiful, still beautiful. But why wouldn’t she be still beautiful, he thought. Despite himself, he looked at her breasts. He’d always loved Magda’s breasts; in the past year, he’d even missed them, separately from Magda. He didn’t feel super proud about that.
Her breasts seemed to wink at him.
“What book, Adam? You’ve always been the artist of the family,” Magda said, but her eyes laughed at him, meanly.
Adam took her hand, just to feel if she was real. At that moment a date flashed in his mind: October 19, 2037. 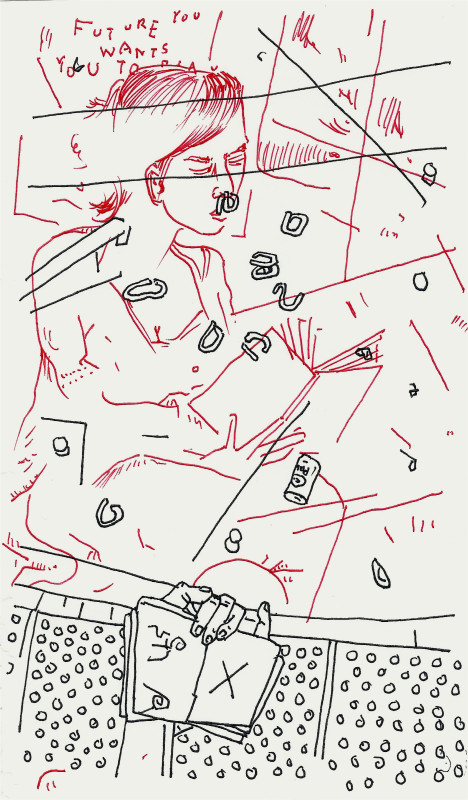 What was it? The date of his wedding? The birth of his first child? The death of his father?
No, no that must be the date of Adam’s death. The most important date. But why? Why did it have to be this way? And why did it have to be so soon?
Magda was laughing hysterically, her hair turning lighter and lighter until it disappeared completely and was replaced with a kind of white feathered wig.
More dates flew out at him. July 17, 2017. November 2, 1984. January 1, 2015. May 23, 2033.
At first, Adam had grabbed the black notebook out of his pocket and attempted to write down the dates, but they came in too fast.
The dates reached into the past, into Adam’s childhood in rural Pennsylvania, when he was so happy, but never slid past the year 2037.        “Magda, stop it!” he yelled in exasperation. His tongue felt too big for his mouth. His ears buzzed and itched. The tips of his fingers were hot and remote, stretching all the way to Coney Island.
“I’m not doing anything! I’m just reading a book peacefully. Still, Adam, you won’t let me do anything peacefully,” Magda yelled in her laughing, high voice. The feathers on her head wiggled and bounced. The eyes on her breasts laughed at him, and they, too, spat out the dates so fast Adam barely registered them. He only knew that they all occurred before 2037.
The dates landed on his skin and bit him, like digital mosquitoes. Adam itched himself frantically. He saw that Magda, despite claiming noninvolvement, was stealing glances into her book. With his last strength, he grabbed the book out of her hands and jumped out of the train at the next stop. 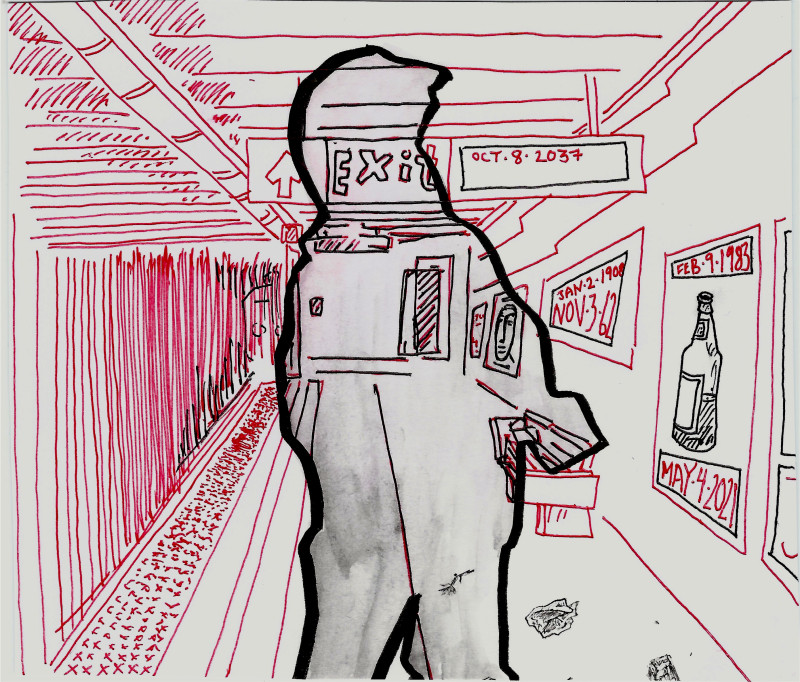 Adam was alone on the train platform. The white wall tiles gleamed, as if freshly washed. Cool breeze that smelled of the southern sea blew from the dark train tunnel. Adam felt languid warmth washing over his body, reaching all the way to his fingertips. He opened Magda’s book: the pages were blank.
When he looked up, he noticed that instead of the ads and movie posters on the walls, the frames featured various dates the circusy-woman and then Magda had hurled at him. The dates were everywhere: in place of the exit sign and the service change poster, plastered over the benches, even written on the balled up paper on the floor.
A train approached the station. On its side, where the destination was usually illuminated, gleamed that dreaded date: October 19, 2037. The doors opened. Several girls sat together, laughing. An old Chinese woman was sleeping in the corner. A young man was reading a pretentiously thick book. Were all these people heading to 2037, or would it be just Adam, if he boarded the train? Did they know where they were going?
Adam walked along the train. In the next car, he saw Magda, the hunched-over girl, and the circusy woman all sitting together and smiling at him.
Pierced with panic, he bolted toward the subway exit. It led into an immaculately-tiled dead-end.
“Adam, come back down here, you naughty boy,” cried Magda. “Come and kiss me. I’ve forgiven you everything.”
“We’ve got your heart here,” yelled another voice, probably that of the hunched-over girl. She seemed kinder.
“You are going, you have already gone anyway!” yelled yet another voice, this one painfully familiar.
Adam had no choice. He boarded the 2037 train. In the window, he saw no reflection of himself.

Chris Russell lives in New York City and works in the field of deaf-blindness and special education. He is the contributor illustrator for Stonecutter: A Journal of Art and Literature, and his work has been featured in Higher Arc, Washington Square Review, Narratively, and 92Y’s Podium.  He is currently working on a graphic translation of Witold Gombrowicz’s Cosmos, forthcoming from Siglio Press.

Born in Magadan, Russia, Kseniya Melnik moved to Alaska in 1998, at the age of 15. Her debut story collection Snow in May was short-listed for the International Dylan Thomas Prize and long-listed for the Frank O’Connor International Short Story Award. She received her MFA from New York University. Her work has appeared in Esquire (Russia), Prospect (UK), Granta, and other journals. She is the 2015-2016 Jenny McKean Moore writer-in-residence at George Washington University and is at work on a novel.