Wasn’t it Camus who spoke about strangers recognizing in his face someone they knew?

As I get older, I begin to notice details in people–the curve of a lip, the angle of a forehead, a single hair on an earlobe–that remind me of a person I have known but can no longer identify.

Once a man in a car rode over to where I was walking on the sidewalk to tell me something he thought I “should know.” He was going to ask for my autograph because he thought I was somebody famous. He was absolutely correct about knowing. How do I find out who I am unless I learn all of the possibilities of who I could have been?

Women have told me I look like a famous singer, even though they cannot remember the name. I often respond with the non sequitur, “But I cannot sing.”

Yet that could be the right answer. Maybe pieces of me are out there, floating around, just waiting for me to latch on to them. I can listen to a song I should have sung, read a book I should have written, play a role I should have played.

Why stop there? Maybe there’s a murder I could have committed. Someone else is being blamed for something I could have done. How can I go on justifying that? How do I make amends? 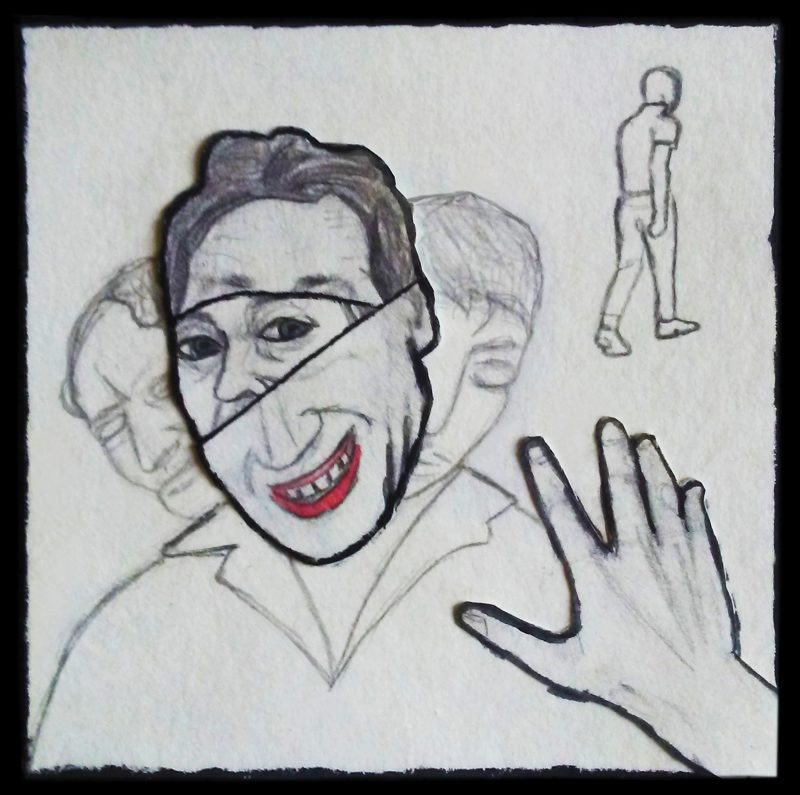 Sometimes when I speak, my voice is unrecognizable. The panic sets in. I attempt a restatement, but I just can’t seem to get it right. It is never quite what I meant.

Who is it that speaks for me using my own mouth? My own vocal chords? What separates me from the beasts if not my ability to control my own language? It was vocal chords that allowed human beings to rise up and take over the world.

I want to be a prophet, grow a gray beard, wear a long robe, walk with a crooked cane. Maybe then people will listen to me when I say, “I have seen the future. It is not ours.”

The world has no interest in prophets. It wants hope, a thing wrapped in feathers with a bubonic plague beak mask filled with dried flowers for a nose. It wants protection from the rotting organic matter of a dying planet. It wants me to promise everything will be all right if we just stick together. I don’t know how to tell it that everyone holding on to each other only makes us sink faster in the mire. 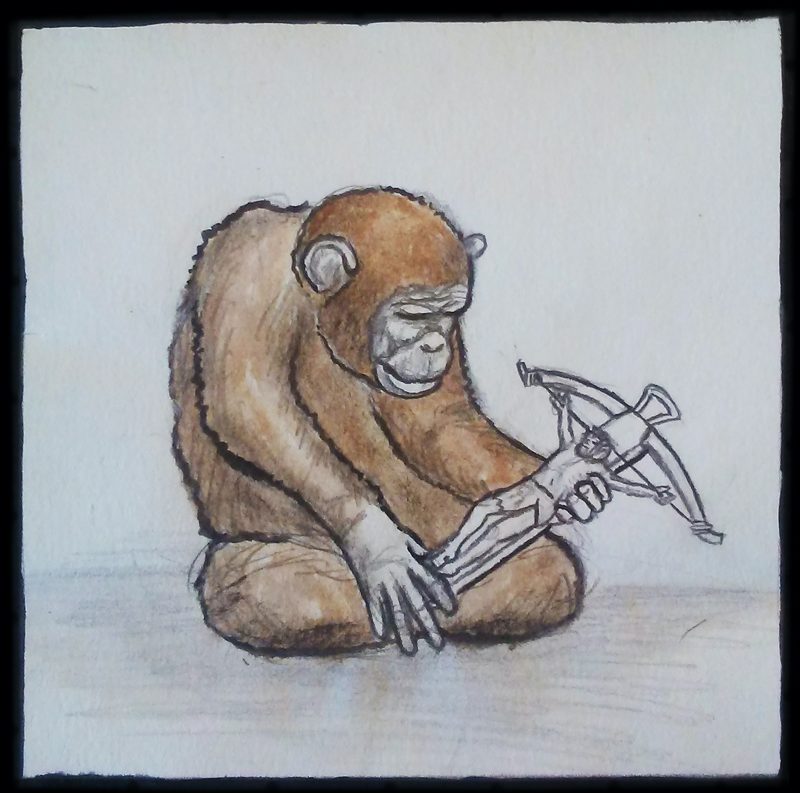 Part of me is primitive, another part is civilized, still another part balances between the two. I have become an optical illusion. My followers turn me around seeking the correct perspective. Am I up or down? Top or bottom? Left or right? Maybe I am a pair of cubes waiting to be rolled. Or a handful of fish bones tossed on the deck of the last whaling ship. Down below, the coffin I carved for myself waits for the final crash of boat and leviathan.

All of the movie theaters I used to hide in are gone. What do I do now? Build a treehouse? Is my living room couch enough when I can no longer walk to the television set to change channels? Which remote control is the right one? The one stuck to my hand? Or the one hiding in my brain?

The crowds are waiting for me. They maintain I have promised them answers. That I am the chosen one. Who was it who told them I was the messiah? Was it me? Did I really believe I could save them? I give it a shot, but when I approach them, no one seems to remember asking me any questions. The answers float off like cartoon balloons without a speaker.

Maybe if I just sprinkle ideas along the way, I can be the Johnny Appleseed of truth. Or one version of it. Careful now. I have tossed some your way. The tiniest sprout is about to engulf you like an old B movie monster. 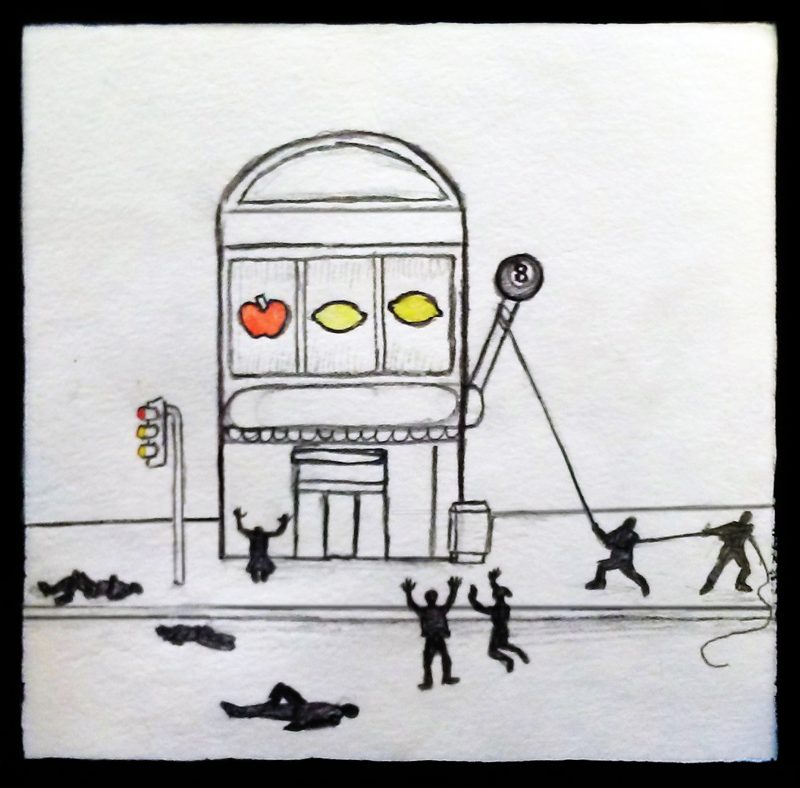 Like an episode of The Outer Limits, I believe I am in charge of the video screen I place before you. But I do not control the horizontal. I do not control the vertical. I am just a series of random dots. A Georges Seurat painting. And my piece of artwork is just a dot in a larger one. And so on, ad infinitum.

There are more dots out there all adding up to a single thing. I have tried to gather them up, to put them back together as if I were the messenger in a child’s nursery rhyme. Someone must take over where I left off. Will you do it for me? If I reach out my hand, will you take it?

Shakespeare warned us that as long as we could say, “This is the worst,” there would always be something worse than that. I am waiting for it now to arrive. I have no double. There is only me and a pile of dots.

I have gambled and lost. I rolled snake eyes. My dining room table has a centerpiece filled with leftover slot machine fruits. Next to it, I keep my magic toy 8-ball. It keeps sending me the same message to all of my questions: “Don’t count on it.” 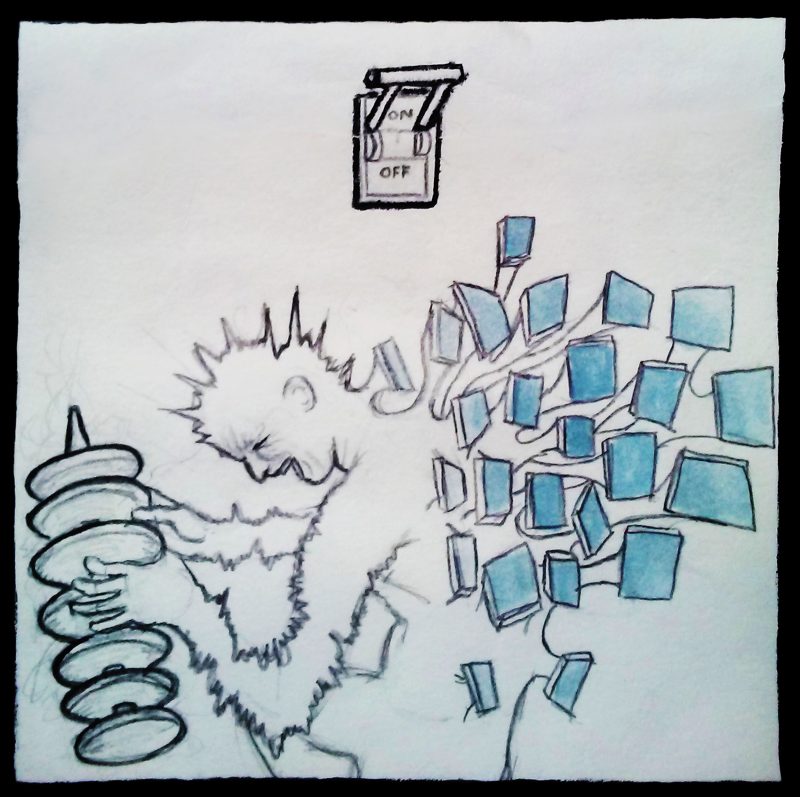 I look at old pictures of myself and wonder, Who is that man? How do I meet him? How do I come to terms with his ideals? He looks like an original deck of cards, yet he too has been shuffled and dealt many times. Every piece of him is random. Nothing else in the picture interests me, just that face. My own.

I feel like I have dropped my own glass version of myself to the floor. I have to sweep up the pieces and put them back together. There are bound to be fragments missing. How do I find them? Or do I just make new ones? But I don’t know how to make glass. Maybe if I push hard, they will all stick together.

Life is about grit. About determination. Shocking yourself into action. All the time knowing you are bound to fail. That old idiom about picking up the pieces and carrying on may have been meant literally. Maybe someone understood how fragmentary we all are. How delicate. 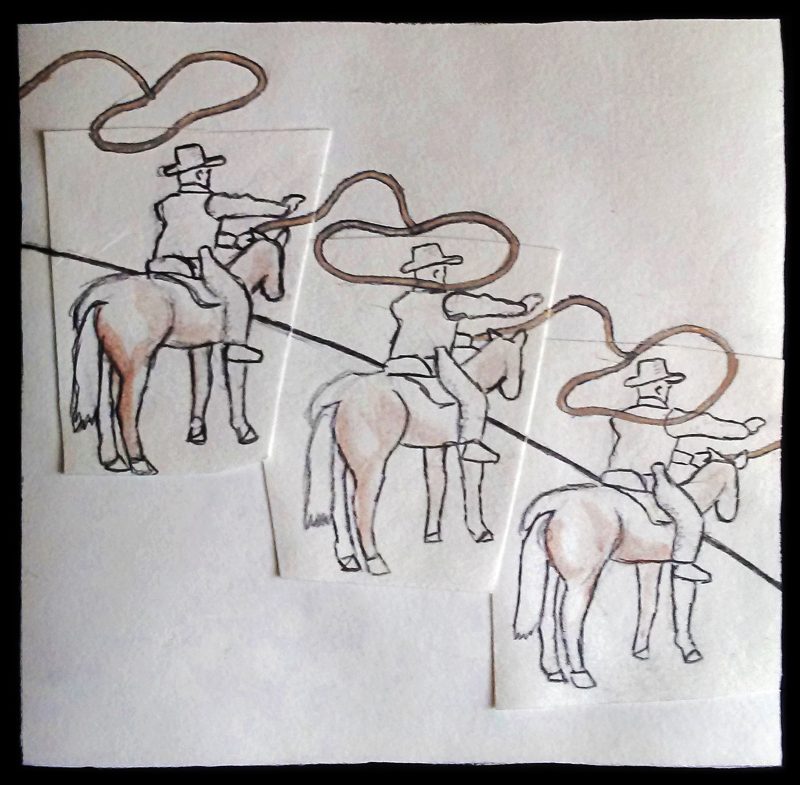 What is my next move? I am all out of pawns. My infantry soldiers have deserted. I want to be the policeman directing traffic while everyone else runs away. I will stand tall blowing my whistle, the last vestige of a civilization ignored by the very citizens it tried to enlighten.

Let’s play a game of telephone. I will whisper the truth to you, and you whisper it to the next person in line. I guarantee you we will end up with a collage of nonsense. Shreds of paper stuck together with a thick glue. We will spend our evenings removing the hair and dust sticking to our fingertips.

Come closer. Put your ear up against my lips. Do you shy away? Don’t be afraid. They are red and moist. They wait to tell you what no one else will. Listen carefully now. Here it comes. 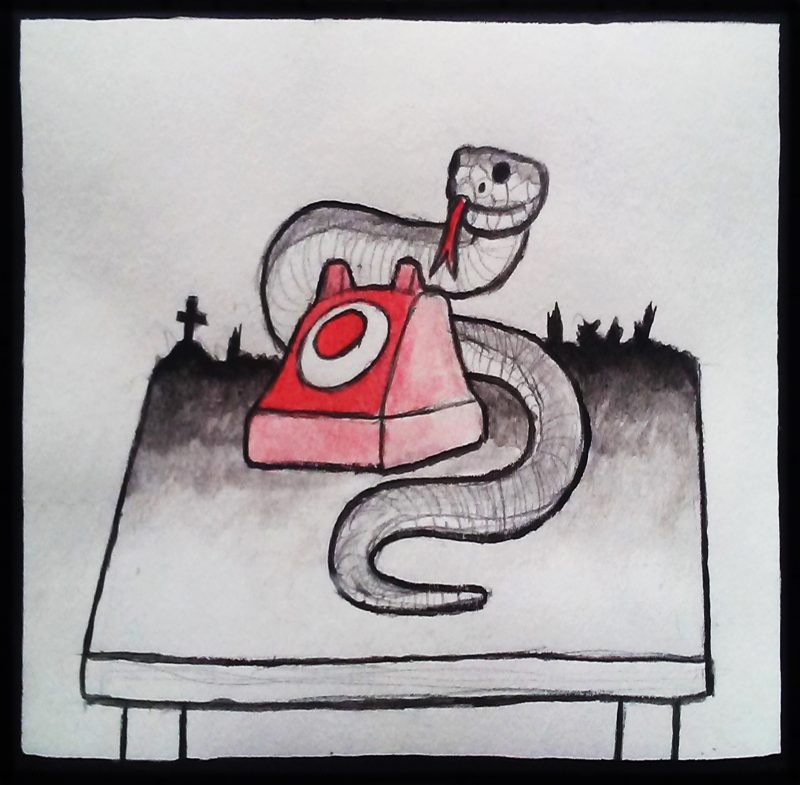 I am alone now. I have begun the process of aeration, of decay. My veins have accepted the formaldehyde. No need to wait for the eulogy, the procession of cars with their lights on passing through stop signs, the graveyard mock seriousness, or the final celebration where everyone heaves a sigh of relief it is not them leaving.

It is all a sham anyway. The snake oil peddlers will always be there passing out hope in tiny bottles with childproof caps. The emptiness inside will not discourage desperate human beings.

Roll out the red carpet. Dress me in the finest designer clothing. Toss flower petals my way. Throw away your self-help books. Tell your guru to find another sap. Find your spot behind the wooden barriers I have set up.

Let my chauffer hold the limousine door open for me. Menial tasks are beyond me at this point. I must concentrate on the two words I need to tell you. Only two simple words. Two letters each. Everything you need to know in four letters. Lean forward. Here it is. As if. Live life as if it had meaning. Now. Begin again. Renew yourself. 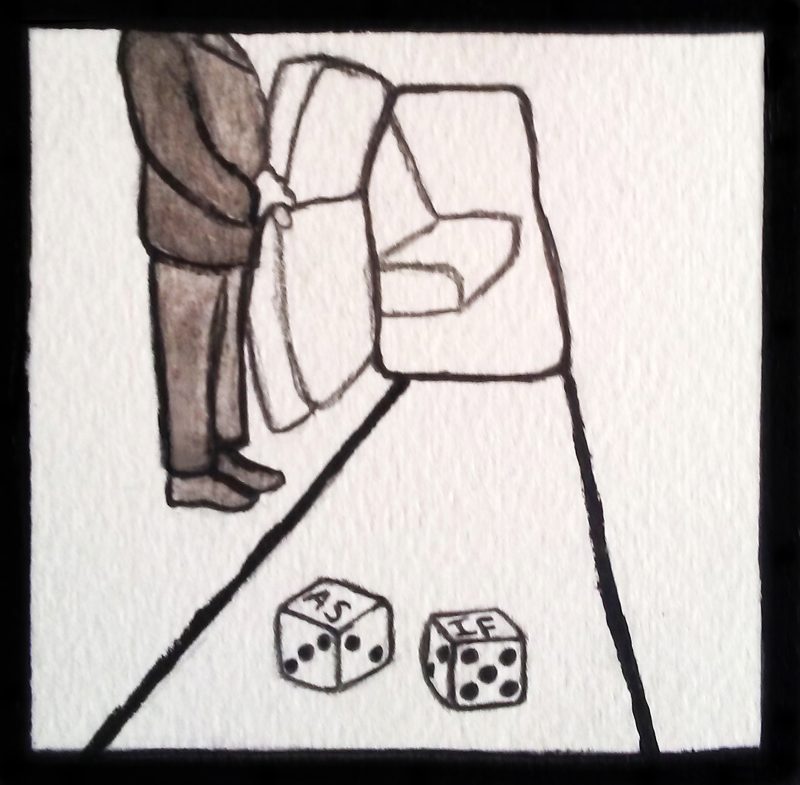 Jimmy Pappas served during the Vietnam War training South Vietnamese soldiers. A retired teacher, he was a finalist in the 2017 Rattle Poetry Contest, where he won the 2018 Readers Choice Award. His book Scream Wounds contains poems based on veterans’ stories. He won the 2019 Rattle chapbook contest for Falling off the Empire State Building. His interview with Tim Green is on Rattlecast #34. Jimmy lives with his wife Barbara in the small town of Chichester, New Hampshire, where they enjoy the state’s vibrant poetry culture.

Clovis Schlumberger is a Franco-American visual artist, based in Paris and Los Angeles. His practice includes drawing, painting, animation, installations, and performances. He is finishing his MFA at “école des Beaux Arts” in Paris.