First we see her hand, skimming the
wall like it’s a new fur coat. “There’s
the switch!” it says, snapping the
toggle to the ‘on’ position. The fan goes
whir, a dim light shines. The other hand
arrives. They do the short, exciting
work of removing Stella’s underthings.

“The thing about baths,” says Stell to
her invisible audience, “is they start
well before your body touches the
water.”

She demonstrates: leans her waist
against the coolness of the sink, closes
her eyes (the better to appreciate her
nakedness). Internally, she slips down
to The Very Pleasant Place, maintained
explicitly for such moments.

At this polite suggestion, Time wanders
off — puts its feet up on a pink-sand
beach. Space, also free, breaks apart to
try new gravities, and to visit unusual climes.

As long as Stella stays in this charming
space of daydream, neither Time nor
Space need carry the world aloft on
endless shoulders. The three of them
will enjoy their freedom—as they
should. “It’s necessary,” is the party
line, in the parlance of Stell. 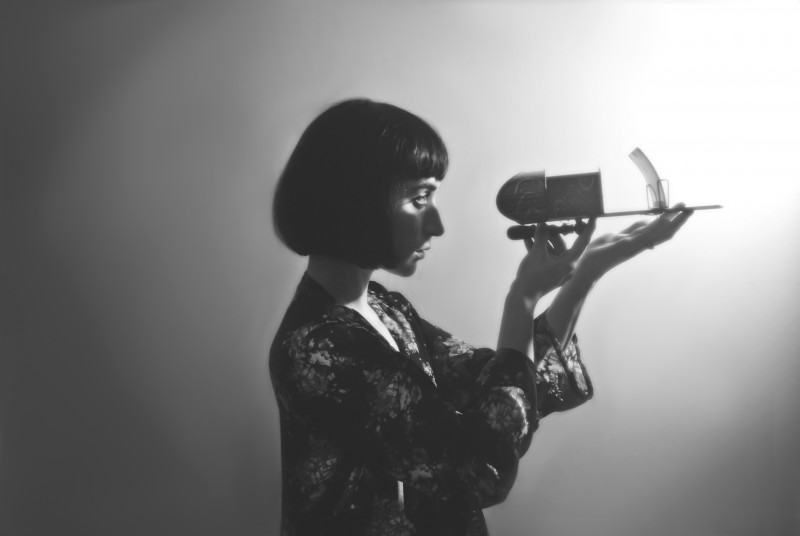 “What makes life easy?” someone in the audience asks.

A bed with a nice, thick mattress

The principle of sufficient reason
and, as frequently, sufficient principal

Plus men — though they’re not indispensable. She
backstrokes, surveying her romantic career, its Diamond
Jims and Sawbuck Joes.

“In my youth,” she thinks, “I enjoyed them more.” A
younger, more nuova Stell held dinner parties rapt with
bawdy philippics against prudery. In her middle years she
served as discerning editrix, to a hair-raising catalog of
contes de seduction. Stella, back a ways, had the energy
for that.

Now she’d rather think in the mornings. Would rather
compose her correspondence with no interruption. Likes
to eat what she wants, drink what she likes— unholy
concoctions of espresso, seltzer, chamomile, cider,
vodka… a pill if she has something good. Stella wonders if
she goes a bit far in that regard (see: “Summer of Stell
and Bourbon, The”).

“I drift on my current,” the Stell concedes, wondering
whether she actually prides herself on this, or if it’s just
the way things are.

She stretches her body to its full, exciting length and
executes a self-taught pirouette. She articulates her
haiku-like modus. “I obtain money and pleasure where I
can / and I try not to think too much about / what my life
is coming to.” 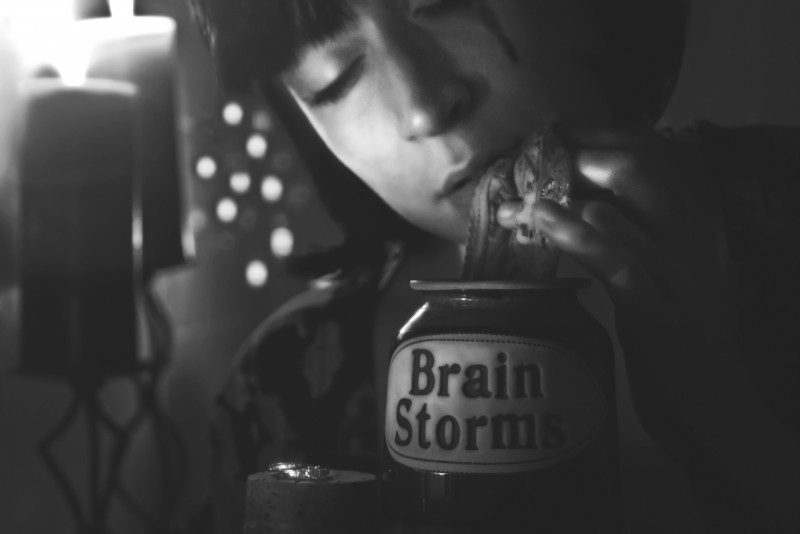 In the cavern beneath the flour sacks and
saints candles (Maria Novella, Padre Pio di
Roma, Santa Lazzaro-degli-Armeni-may-He-
rest-his-soul), Stell caught sight of a thing that
charmed her: a stringy gray tail, ringed with
mascara-black bands.

The Shopcat – months gone who-knows-where
– was back at home. It was making a
celebratory racket, it seemed: barreling back
and forth, chasing moths through the ancient
canned goods.

The Shopkeep described the creature’s return.

After running away at that time of year when
toms are wont to do (and making everyone fear
the worst) he’d only just showed up — all
mangy, rude, and gummy-eyed (a look that
agreed with him, one had to admit).

“I saw him there outside,” said the
Shopkeep, “when I opened. Just licking himself,
and sneering at rats by the garbage can.”

“He’s back,” was all Stell said, while
paying for a package of taper candles. 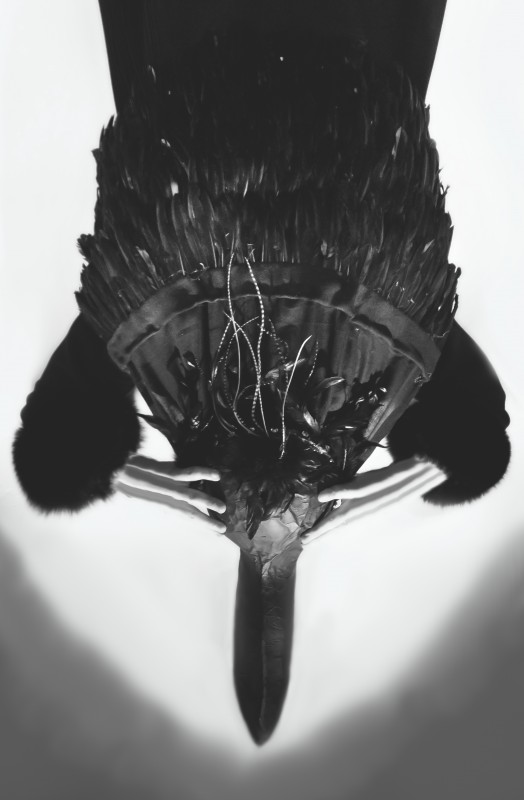 Waiting for guests, Stella scrawls last night’s dreams down in a
notebook. An eerie dream-chant catches her ear.

She used to keep a microphone by her bed to record her
nocturnal errands. But in time Stell got so good at recalling her
dreams, so absorbed in telling them back to herself, that it
unmoored her from reality. She wandered around at all hours,
pressing the microphone to her chin, describing ever-minuter
details. For a while, she couldn’t quite tell who she was, even—
Dream Stell or Day Stell. So she stopped.

“Stel’Luna.” Her nephew kisses Stella’s hand, a joke that just
makes Stell’ melt with glee. He gives her a bottle.

“Do you know,” he says, “there was a black mass on your street
the other night?”

“And why would I know that?” Stell asks. She doesn’t believe it
for a minute.

“The package store clerk told me. He has a window that faces
the Hanson house. It was happening in their sunken parlor.”

The man at the liquor store has An Imagination, Stell thinks. It
makes the goings-on of this town just a little more interesting.
She feels good buying her booze there.

“Did they sacrifice something?” she asks.

“The human voice — there was this dreadful high-pitched groan-
chant. He said it looked shabby too, from where he stood.”

As she says this the door swings open with a giddy squeak. A
cascade of coughing and laughter fills the air, as additional
figures enter.

“Hello and Welcome,” says the Stell, “I’ve been expecting you.”

The ceiling lights go out.

“In a town that smelled like salt,” Stell said, lighting a lamp of
cloisonne, “at the end of one Fall, there was a house.”

The living room resembles a clearing now, in the stick-
furniture wilderness of Stella’s rooms. A half dozen people
are seated… a set-dresser, a singer, Stella’s wan
Doppelganger from the post office.

“My mother lived there, and was sad in her happy way.

“My father lived there, and was happy in his sad way.

“Our dog lived there, and was glad in it’s glad way.

“And I lived there, neither happy nor sad, or particularly glad,
but ultimately more or less willing.

She sips her wine.

“It seemed increasingly like a good idea to make things up,
to distract myself from the loneliness I felt. I probably got the
idea because of my mother. She toiled for years on a suite of
absurdist framing devices that she published for free, in
loose leaf at the bottom of her purse.

“Also, to amuse the dog I started telling her stories. And
without excessive ceremony, here is one of them:” 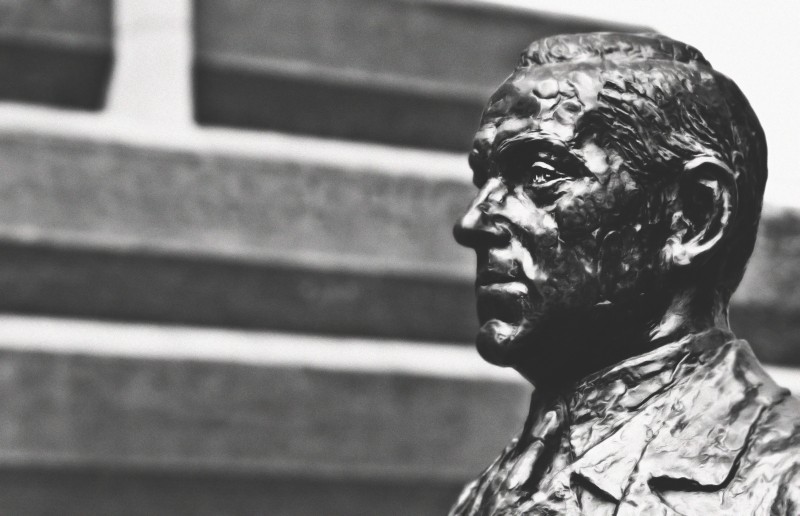 There was an old creature who lived in the sea.

He had big, weedy hands that he used to cover his
teeth (he had no lips). And he had long, rusty legs
that were bent-all-in-the-middle.

And of all the places he foraged, his favorite of all
was this very shore where the harbor’s the coldest,
the rocks are the sharpest, and the night tides
exceedingly quarrelsome.

At the end of a dark-skied day, when even the
snowbirds had hidden their beaks in their feathers,
the creature grew bold (as was its wont). And,
dragging itself through starless surf (creep-slosh,
creep-slosh) it peered hungrily up on shore, at the
windows of an old woman’s house (far more than
the fair-of-flesh, the innocent tasted good to it).

Now, it wasn’t long before the old woman heard a
clicking sound. There was something, it seemed,
rattling the house’s heavy, Oak front door, prying
at the ancient latch. Now, she heard the twisting of
the blacksmithed lock. Now, the floor groaned
beneath an unknowable weight. Now, those vicious
teeth appeared before her! The woman screamed
as the creature leapt upon her hound – a brave-
hearted thing with fur the color of chestnuts –and
stuffed the dog in its hideous open maw.

Give him back! the woman yelled. She held out her
hand. I’ll give you anything, she said, whatever
you will take. She had lost much in her aging life
and she was no coward. She’d rather die than let
her friend, the hound, be taken.

So carefully, and slowly, as if luring an animal with
a piece of meat, she entreated the creature to
stick out its long, brown tongue, and to wrap it
around her wrist. The beast fixed its eyes on
hers—giving her the dead-eyed look one sees on
paintings of tyrants, and statues of the tormented.
Sensing a favorable bargain, the creature granted
her wish.

In a hideous motion, not unlike a person throwing
up, the creature spat up the dog (it lay there
heaving on the floor). And before the poor hound’s
struggling eyes, and as the tide rasped in its ears,
the monster metamorphosed: dissolving into a
slime that drew itself inside the woman: stealing
inside her peachy cheeks and silvery veins. The
woman’s mind, in turn, went off to circulate in a
void some place, where exactly the devil only knows…

It’s said that now, in the guise of that sweet old
woman, the creature stalks on land. You can tell
because it makes those telltale sounds (creep-
slosh, creep-slosh) as it stalks its prey.

The dog, in case you wondered, ran off and was
found after many, many days—the better part of a
month, they say. It had wandered along the shore
for miles, nearly starved to death, unwilling to go
in the water or back on solid land. It was only
when a kindly lighthouse keeper lured it into his
service that the poor thing had a moment’s rest.

The house is at peace again. Sun rays — a gentle filtering —
hold up the dim canopy of the sky. Stell puts a plate of chicken
mince down outside the back door. The roving Shopcat lunges
from the bushes to devour it.

“Evidence of a struggle,” she whispers now, in awe of the
kitchen’s dishevelment. She decides to leave the mess. It looks
correct.

“No, no,” she vows, her voice a music-box of tones. “You were
charming. Everyone thought so.” A guest of Stell’s has called, as
he sometimes does, to ask if he was rude at the party. Stella’s
almost always honest.

“I liked it when we danced,” she says. They had proved last night
that you could tango to Chopin, so long as you did it vigorously
and destroyed a vase. “It was a cheap one anyway,” Stell
informs, “the kind that comes free with flowers. I felt towards it the
sort of ambivalence one feels for tasteless pastries, and boring
games of cards.”

Hours later, in the brightness of high noon, Stell is finally satisfied
with the way her lair is laid. She positions herself on a daybed
just so and breathes in slowly. She is ready, at last, to conduct
herself to the world of Dream; it’s easy for her to get there, since
she always keeps one foot in that country anyhow.

“Good night, Stell,” her nephew says, dozing on the couch.

“Good night,” Stell calls back faintly. But she doesn’t consciously
know she’s said these words. She’s already leased herself to the
next galaxy over. She is beginning to drift on the cosmos:
becoming a pleasingly tiny speck on the whorl, a rising ember in
the dark.

“Until we meet again,” she says to the land of the waking. It
recedes behind her like a departing thought, a peaceful interlude.

“Bye bye Stell,” it seems to respond, gently unhooking from her
mind’s elaborate train, her comet-trail of days. “It was very nice to
see you here, as always.” 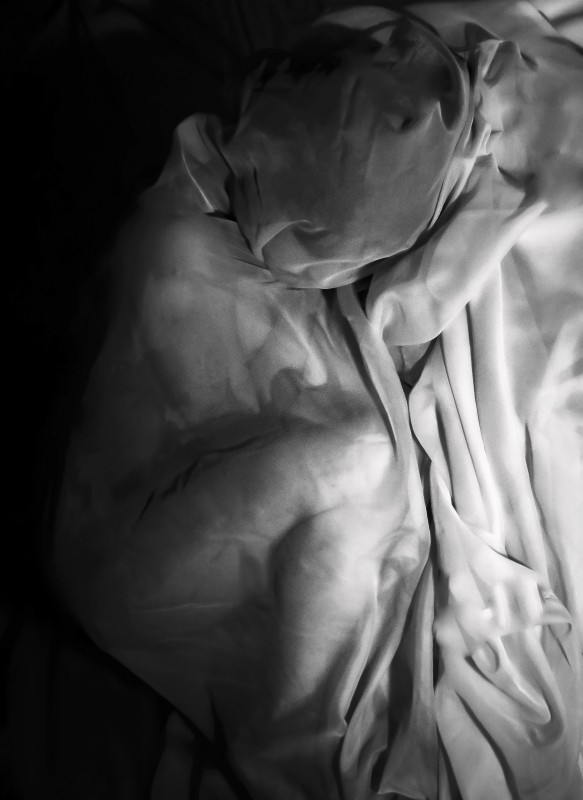 A person to whom the name Colin Shepherd was legally affixed at birth, Colin Shepherd is the current registrant of colinshepherd.com– an attractive top-level domain for the letter string “colinshepherd,” and a reasonably impressive get, considering how many Colin Shepherds are running around on this fine and busy Internet. According to publicly available records he is likely to remain at that web address through 2022.

After receiving her bachelor’s degree in Visual Media Arts with a minor in Photography from Emerson College, Alexandra Gottlieb made her home in New York City, working in film, photography and—most recently—publishing at Penguin Random House. Her preferred format is medium, her film of choice is anything grayscale, and her favorite editing vessel is the darkroom. She has a particular obsession with photographing hands, high mountains, and the creases of the human body.