The woman’s computer keyboard broke in week three of quarantine. She pressed her index finger down on F2—nothing. She pressed harder—nothing. Skittering across the whole row, she realized she could no longer control volume or brightness.

She couldn’t even escape!

Trying not to panic, the woman slid a finger down to the second row and thumbed the number seven, again and again, to no avail. She tried six and then eight, remembering the old joke: why was six afraid of seven?

Could she live without numbers and exclamation points and parentheses? Maybe it would be freeing to shed time and inches and age, to stop feigning enthusiasm, to no longer rely on asides. (If she was perfectly honest with herself, there was something thrilling about her sudden inability to delete.)

But nothing in the third row materialized, either. Four necessary, and now inaccessible, vowels.

The woman gazed at the white Word document and saw the silence.

Panic officially arrived, breaking down the dam in her throat.

There were too many things she still needed to say, and the woman couldn’t even write writer. She was nameless, purposeless, no one.

Quiet gone, too, and everything true.

The mail was slow these days; packages arrived sluggishly. A new computer might take weeks. It was no one’s fault—there was a virus, and people were deciding what was essential and what wasn’t.

“Sham,” she typed, meaning shame—this was, after all, a relatively mild inconvenience.

And then something came unstuck inside her.

She would list all the words that were left: 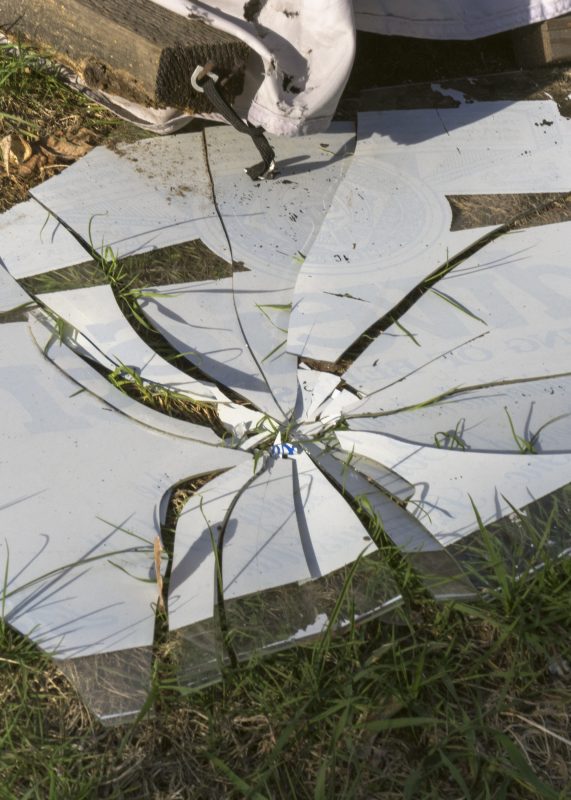 After an hour, the woman grew bored of listing all the leftover words—nauseated, even, by the sight of the letter a. Her last remaining vowel. Most of her favorite words, she now realized, had an i, u, or e—splurge and quirk, for example.

And so the woman communicated. She sent her ex, Cameron, an email. With so few options, she was suddenly savage; no clearing of the throat, no sugar-coating.

Well, that just about covered it. Using the third person to show him who he was made the woman feel cruel, and giddy, and efficient.

She didn’t expect him to reply, but the woman was often wrong about people. The following morning, when she glanced absentmindedly out the kitchen window, she noticed Cameron had smashed her favorite vanity mirror and left the pieces on her front lawn.

Anxious about nosy neighbors, she hurried outside in her bathrobe and slippers. 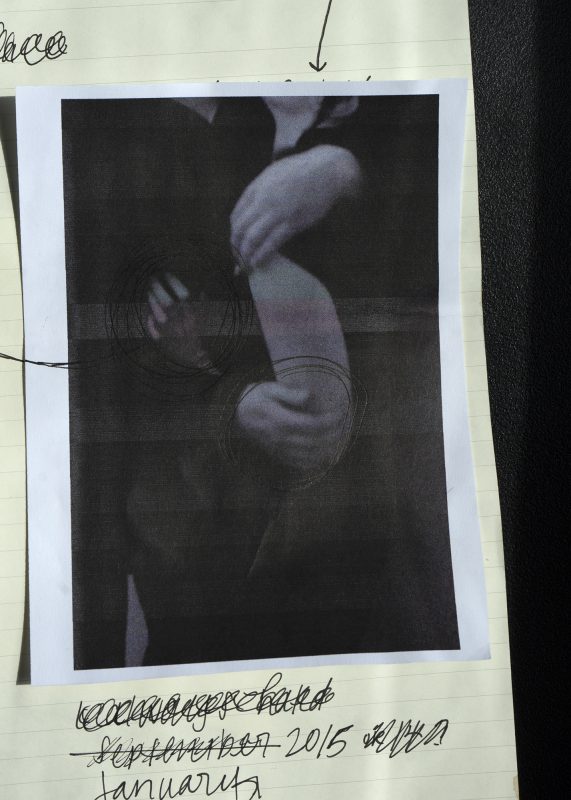 Bent over the broken mirror on the lawn, the woman watched her face flicker in the fragments.

Turning toward the voice, the woman cinched the bathrobe more tightly around her. “Can I help you?”

“Your mailbox is overflowing,” said her neighbor. “A real eyesore.” Gesturing at the broken mirror, her neighbor added, “Not to mention that!”

Boxes did indeed litter the pavement underneath the woman’s mailbox. The only thing she’d ordered recently—a new computer—wasn’t due for weeks. So the boxes must have been gifts. The woman received many. Often strange, sometimes sweet, occasionally disturbing.

In fact, her bathrobe was a gift. Bathrobes, oddly, numbered in the dozens. Who—under normal circumstances—had enough free time to lounge around wearing one? Most mornings the woman shed her pajamas, pulled on pants, drank coffee standing up, and then went out into the world. Yet her fans clearly envisioned her as the bathrobe-wearing-type! It mystified her.

Ironically though, The Bathrobes™ had become her official quarantine uniform, and the one she currently wore—emblazoned with jaguars, pythons, gorillas, toucans, and capybaras—was her favorite. Her last romance novel, a reimagining of Tarzan featuring a woman raised by jaguars rather than a man raised by apes, sent her fans into a tizzy. Jungle-related knickknacks arrived with abandon for months.

Ignoring her still-sputtering neighbor, the woman dragged every box inside, and then, sporting a mask, gloves, and goggles, began opening them. Inside the first: a single piece of loose-leaf paper, and half a Polaroid.

Why not send it in an envelope? As she took a closer look, a delicious thrill trickled down her spine.

She recognized those hands. She’d been collecting evidence for years. Photographs, letters, lipstick stains, receipts. But her obsession was supposed to be a secret. 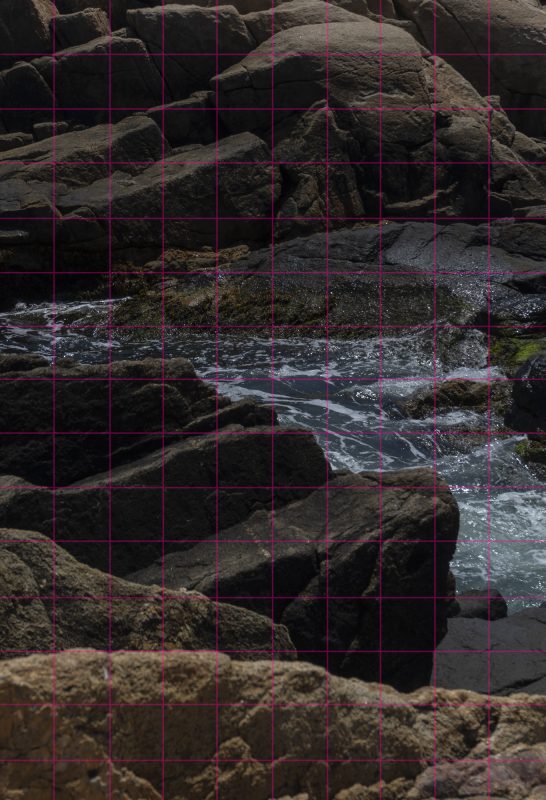 Examining the loose-leaf more closely, she squinted at the cross-outs. So many of them—such a tease! Was it possible the initial scribbles weren’t meant for her? Maybe the sender—in a frenzied rush to communicate—had simply groped around for whatever scrap of paper was within reach.

She almost laughed. Nothing, and no one, was fully-functional right now. All dealt a bad hand.

The photograph—of her biological mother, she was sure of it now—was glued to the loose-leaf, but slowly coming unstuck. She peeled it off, easy.

Scrawled on the back of the photograph, some coordinates.

No one she could think of—except herself, who had plopped it into her second novel. A swoony dreamboat sent his girlfriend on a scavenger hunt spanning forty-eight states before she found him, before he proposed.

In retrospect, kind of a dick move. (The book got bad reviews.)

Clutching the coordinates, the woman got in her car, pulled up Google Maps on her phone, and navigated.

After two hours, she finally had the waterfall in the crosshairs of her camera lens. 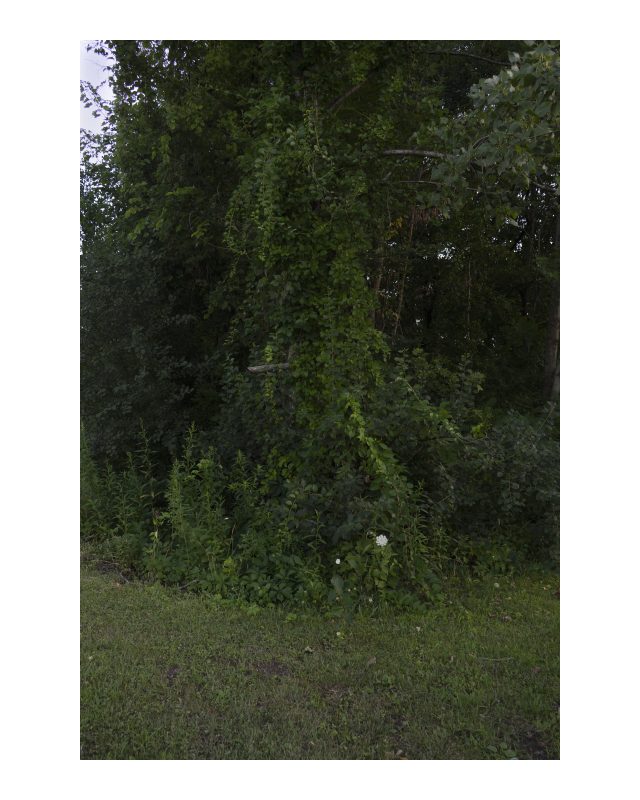 She held her finger down on the shutter until there were at least ten photos of the waterfall in her camera roll. The trick was to keep clicking, because every time the woman chased her mother’s ghost to yet another random location, the results were grainy, too ethereal to be believed.

The first, second, and third of the ten-part series came out blindingly white—how? overexposure’s rare on her iPhone camera—and the fourth, fifth, sixth came out dark as night. Again, how? It was late afternoon.

But finally, in the seventh photo, she saw those hands again, floating. Grimacing, she pinched the screen and zoomed in.

Black ink stretched across all ten of the ghost’s floating knuckles.

TRY THE TREE, the ink read, and absurdly, the woman was reminded of her keyboard. All those QWERTY keys abandoning her in a moment of need.

The only letter she’d be able to use from TRY THE TREE was H.

Sturdy like a four-poster bed. That was the last time she saw her mother’s ghost—hovering above her as she woke from a dream. The ghost was reaching out to touch her, and the woman thought: finally. Her rabid collection of lipstick stains and letters and receipts and photographs had communicated, somehow, that she was ready to receive.

It had always seemed profoundly unfair that the day she found out she was adopted was also the day her biological mother died.

She tried the tree.

It was clear which one. Amidst the green, a single white flower. It looked, at first, like a snowflake. But it was finally spring and hadn’t snowed in weeks. She bent down to pluck it. 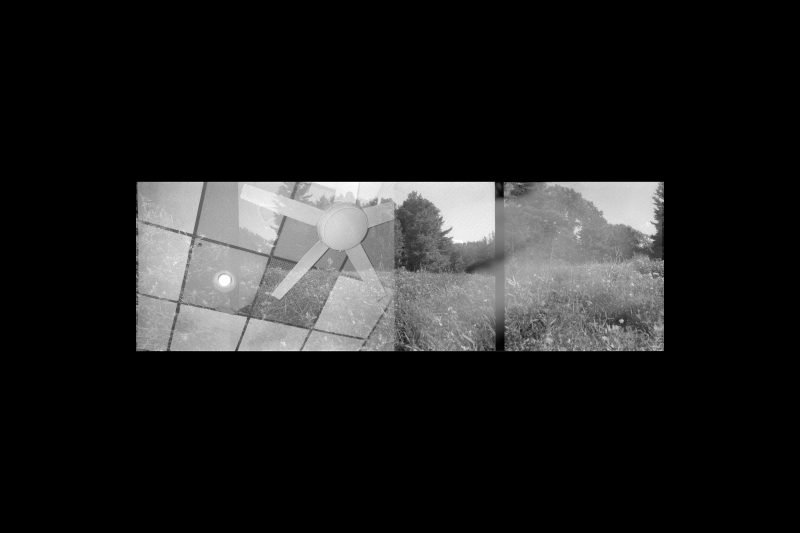 And when she blinked, she was elsewhere: in a field with an abundance of tall grass. As a blade tickled her shins, she peered down at herself, at the lanky torso and long legs she’d inherited from the ghost, and realized she was no longer solid. Her body shimmered like a trick of the light. Panicked, she crushed the white flower in her hand—and inadvertently muted the memory. Birdsong abruptly ceased. The wind stopped whistling.

Her mother’s ghost looked, if anything, exasperated, but still beckoned for the woman to follow. Inside a small farmhouse at the opposite end of the field, the woman was forced to watch from the corner of a bright room as mouths opened and closed, as throats vibrated, as people appeared to laugh and argue. A teenager in a yellow dress was having trouble sitting still. Her ankle rotated left, then right; her knee jiggled up and down. Sweat glistened on her upper lip. A ceiling fan spun.

Her mother, obviously. Alive, breathing, sixty percent water. In the summer of 1952, her parents met for the first time. The woman knew this from letters, from photographs. But now it seemed a cruel joke that her ability to listen to what was being said was entirely dependent on her ability to keep a delicate flower preserved and intact. Fuck flowers. She’d never liked them, never understood why other women spent money to bring them home, put them in water, and then watch them die.

As a romance novelist, she was, of course, bound to keep her hatred under wraps. (What would her publicist say?!)

Clinging to the crushed white flower, the woman blinked and was elsewhere again. 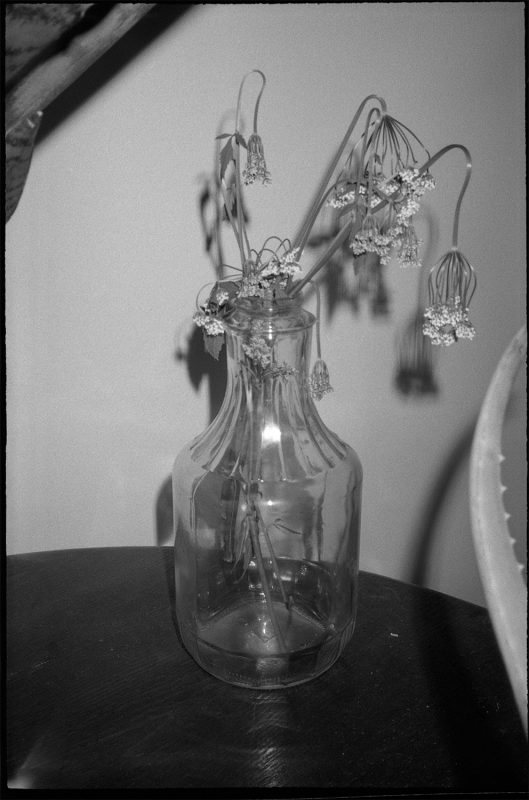 Together, they visited an abundance of important places and people of the past, but each visit lasted mere minutes, and the woman often left the encounter feeling more confused than ever. Her confusion was due, in part, to this unfortunate fact: ghosts can’t speak. To communicate, they can only possess the living and compel those living bodies to send cryptic messages from beyond the grave. Once those messages are successfully interpreted, the ghosts can bridge the gap using teleportation flowers. But then how to explain what came next?

It was, of course, a little weird being ushered around by her mother’s ghost. The woman didn’t write horror, nor did she particularly enjoy spooky stories. The only comparable situation she could think of was in A Christmas Carol, but that would imply she was a Scrooge-like figure with room to learn and grow. Even if, yes, she’d thrown a mini tantrum when her keyboard—her lifeblood!—unexpectedly broke, and even if she took great satisfaction in insulting her ex-boyfriend, and flipping off her annoying neighbor when said neighbor had her back turned, and frequently deriding her dopey gift-giving fans (what sort of sad lives did they lead?), she didn’t consider herself a bad person. Not really.

She was just chasing the truth and had been for a long time. She’d never expected it to arrive via the supernatural, but the truth rarely announces itself the way you’d want it to.

And so she was more than a little shocked when her mother’s ghost set her car on fire. She was in the driver’s seat, preparing to finally go home, when flames began to lick her knuckles.

A horrible end, to be sure, but as her soul divested itself of her body, she became a ghost, too. Joining her mother in the not-quite afterlife was a not-so-funny joke. Perhaps all those lipstick stains and receipts and letters had actually been a test—and she’d failed.

Either way, an eternity of miscommunication would surely follow. 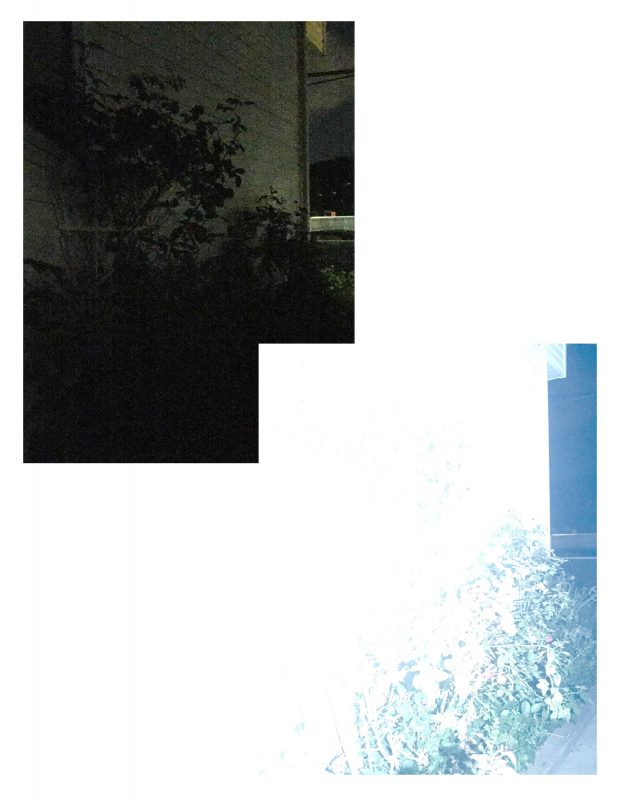 Caitlin Barasch is a writer and native New Yorker. She earned her BA from Colorado College and her MFA from New York University, where she also taught creative writing. She has published fiction, nonfiction, & poetry in over a dozen publications including Catapult, Hobart, Amazon’s Day One, Atlas and Alice, and The Forge. Her debut novel, A NOVEL OBSESSION, is forthcoming from Dutton (Penguin Random House) in 2022.

brittany smith is an interdisciplinary artist and curator located in Massachusetts. She accrues sounds, texts, and images to assemble her projects. She collects proof of existence to construct and visualize her past; her collection is created so that it can be returned to, reconsidered and analyzed with present knowledge. Her artwork has been shown at Cluster Gallery, Nomadic Gallery, Electric City Barn, and Gallery 263. In addition to curating shows at Brooklyn Art Cluster and Nomadic Gallery at Zone 3, she runs an online exhibition platform called re-direct gallery.