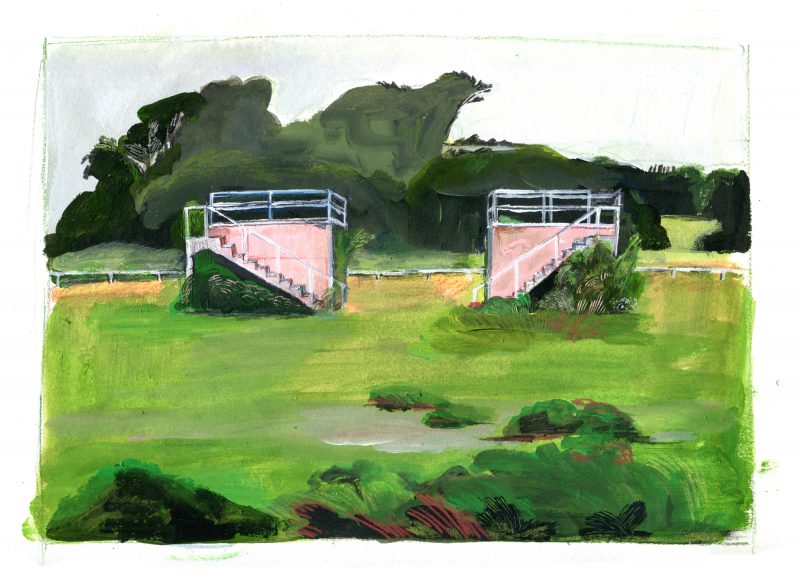 The night I named your ochre star, I dreamed a dead man floating toward the ceiling.

The star is lost to me now. The desert is made of them. In the distance, relict howls from dry hills, from what, I’m not sure. I wander with purpose until dawn, hoping that a breeze or calloused plant will seem familiar.

Always, nothing. I make a few notes in my journal. It’s not clear where I am. Uneasy, I imagine your face, always my anchor, taught and severe under an immaculate bun.

I become aware of the deep folds and creases in my own face. “They catch the darkness,” father once told me, “which is why nobody can ever remember what you look like.”

He was as cryptic as he was cruel. But he is far away. Manila is far away. I make my way down toward the street lights. Their glow is barely distinguishable from the warming sky, and so their illumination seems endless.

I see my car. It’s alone in a liquor store parking lot. Wedged into the dusty windshield, there is a flier. I crumple it, ready to throw it away, and then feel compelled to smooth it out.

“Your Dreams Are Waiting! Indio Homes Available for Practically Nothing.”

Below the text, I find it. Green grass. Gray skies. Crumbling pink platforms. I can see myself climbing the stairs. At the top, a pocket knife and a book. I am overjoyed and terrified at the same time. It’s not a memory, exactly. But I have the scene written down in my journal. At that moment, I can’t summon the strength to turn to it. I stand there, instead, blank in the morning heat. 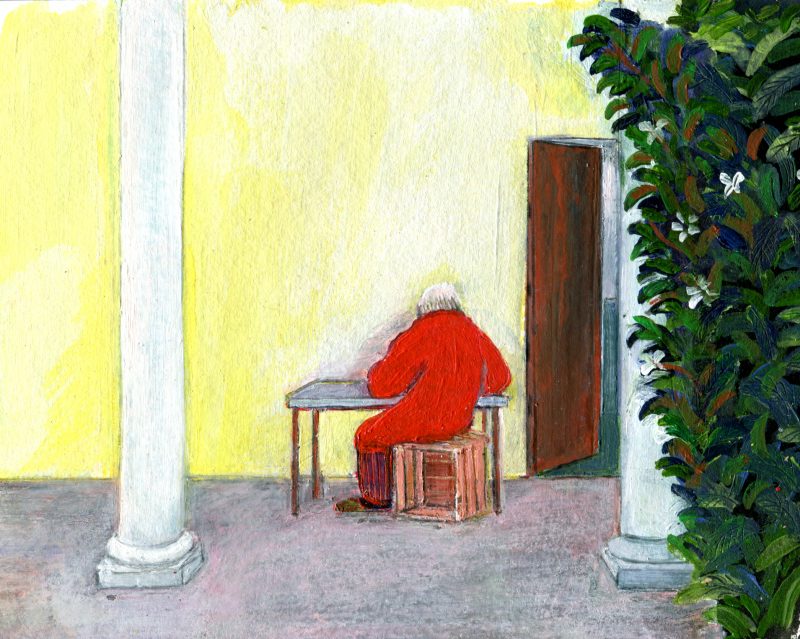 A few minutes later, driving to work, I pull over to call the number on the flier. The hold music sounds like Vivaldi. Normally, I would find it maudlin, but now, distorted with the syncopated ghosts of some forgotten orchestra, it sounds urgent, beautiful even.

Nobody answers. There is no recorded message, either. The music just keeps playing. I hang up and search for the address of the realtor on my phone. It’s in Mecca, about 45 minutes away.

I call my boss at the coffee shop and tell him I’m sick. I have the feeling he has confused me with the other Federico. He sounds annoyed, but I know he is too lazy to object. As expected, he tells me it’s “fine,” and I start the car again.

The sun has lost the sympathy of the morning. My AC is broken, so I leave the windows wide open and pray for a sliver of cool.

Sweating, suffocating, I hit the brakes when a computerized voice tells me that I have arrived. The sidewalk is cracked. I unlatch a wrought-iron gate, barely tall enough to keep out a child. Behind it, a squat, stucco two-story house, flanked by a handful of Tuscan columns and two malformed gargoyles.

The building looks like it’s dying — a stark contrast to the flourishing lawn.

I knock on the door. There is shuffling inside. “Hello,” I say, “Is this Ocean Realty?” 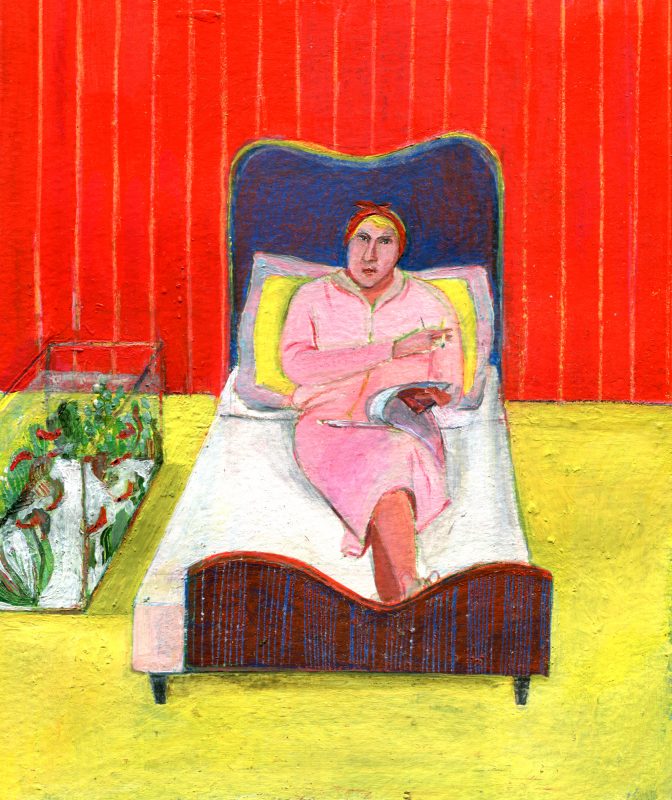 A pale teenager in an umber caftan opens the door. He is holding a carton of curly fries. Chewing, he gestures at me to follow him down a long hallway to a water-stained courtyard. In the rear, shaded by an acacia tree, an old man sits at a drafting table, drawing furiously for a few seconds before pausing to lift his pen, flick away the paper, slide a new sheet over, and then start all over again.

I pull the flier from my pocket and ask him, “Did you put this out?”

The man looks up. He is compact and has a face like a bruised pear. It’s at least ninety degrees out and still he’s wearing a cardigan, red and frayed and faded by the sun.

I bring the flier over to him. He pulls it from my hand and examines it.

Without explanation, he gets up and walks into the hallway. I follow him to a harshly lit room dominated by filing cabinets. Immediately, he finds the drawer he is looking for and removes a sheaf of papers from a green folder. Carefully, he lays them on the ground, and I see see they’re permutations of the flier I brought – the same text, overgrown plants and pink structures – with barely perceivable differences, a robin, maybe, or a flower or patch of muddied grass.

He slips the picture in his hand between two nearly identical images and then pulls back. Amid the landscapes, there is a portrait of a woman in a pink robe and red bandana, smoking in bed while reading a magazine.

“This is in the wrong place,” he says. I agree with him. Confused, he asks, “Who are you?”

I tell him my name is Federico Luis Mauricio and that I came to him because of a dream. He tells me this kind of thing happens to him all the time.

Nearly a year ago, he says, a woman knocked on the door and demanded to know his secret. Every few weeks, she dreamed of flying across the Nordic sky in an airplane, weaving between impossibly tall trees, their tops lost in a gentle fog. She became obsessed with it. The woman rarely left Alhambra; certainly, she had never been to Norway. Yet, there, on a telephone pole advertising cheap flights to Oslo, was a poster with an aircraft navigating through a forest.

“How did you know to create that?” I say.

“It’s inevitable, with what I do,” the man replies.

At that moment, the teenage boy walks into the room. He has changed into the uniform of a Prussian soldier.

“Your wife is out of paint,” he says.

The old man seems distressed. He asks me if I can drive him to the art supply store, back in Indio. “Sure,” I tell him, “but you have to tell me your name.”

When we get to my car, he insists on the back seat.

“Someone used to call me Old Fritz,” he says.

During the drive, we don’t talk. I make mental notes of everything we pass: low-slung houses and sensible trucks, a date palm orchard, a body repair shop, two bicycles abandoned in the dirt. He isn’t taking in the scenery. Instead, Old Fritz is frowning and fiddling with the twenty-dollar bills in his hand.

It turns out he is carrying at least $600. At John’s Art Supplies, he fills a black trash bag with acrylics and heaves it onto the counter.

“You’re not John,” he says to the cashier.

“I keep telling you, there is no John,” she replies.

He gets about $30 in change and walks toward the car without waiting for me. I open the trunk, but he insists on carrying the haul in his lap. Driving on the freeway, I turn my head and ask him to explain what’s going on; he starts talking about the city of Bern.

He was stoned, in his twenties, taking a break on a road trip to Rome. It was cold. Still, laying back on the grass of a manicured park, he was happy to take off his jacket, his skin rising to meet the promise of spring. He took a drag from a small joint. The sound of the Aare River drowned out the few trucks making morning deliveries across the city’s bridges.

Then, a feeling of nostalgia. The scene seemed an imprint of something else. A valley in Alaska, maybe, where he had also never been, or perhaps a vista he had seen in a book.

Later that night, he rented a room in the Old City and started to sketch. He didn’t leave for two years. Making love in the living room of his apartment, overflowing with ferns and grotesque bric-a-brac, he realized it was hopeless; it was time to move on, with this woman, Laura, who would become his wife and convince him to make a new home in the desert.

We are back at the house. He asks me to open the basement door. I walk down into a damp corridor, and watch as he rounds the corner above in his red sweater, dragging the bag across the ground. 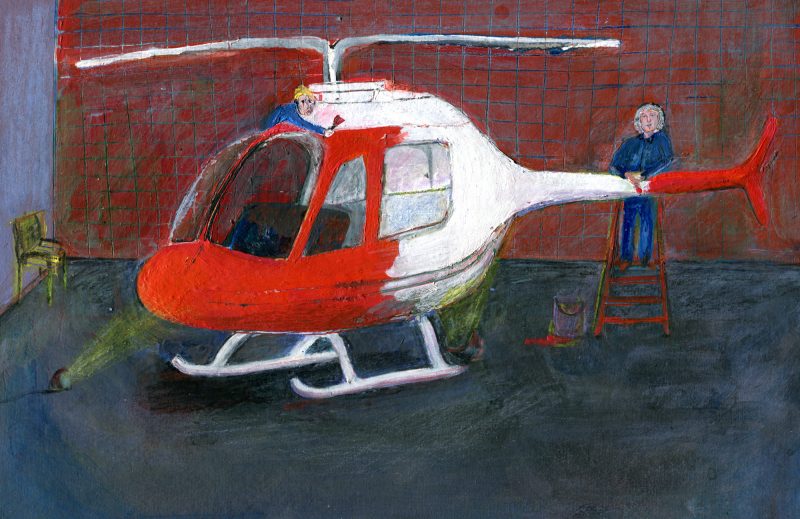 I ask him if he wants help, and he yells down, “No, don’t.” So I take a walk around. The place is cramped with metal cabinets and what looks like a photocopier, as well as sketches tacked onto corkboard.

I notice a painting in the back. It depicts a man with a gentle smile posing near a helicopter, a young boy at his side, hard at work coating the machine with red paint.

He sets the trash bag down on the floor and comes over.

“This never happened. But that’s me,” he says, pointing to the boy.

“I don’t believe in fantasies,” he says.

A woman calls from the house above. Old Fritz leaves me to see what’s happening.

I am alone. I feel betrayed and I don’t know why. For some reason, I start grabbing everything I can – art supplies, drawings, coffee cups, pencils – and run back to my car, items spilling out of my arms. 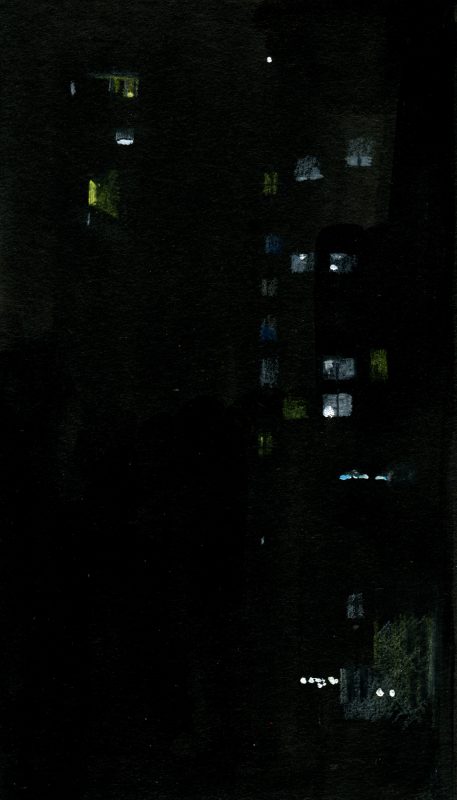 Like that, Old Fritz is transformed into a dude. He’s not a soothsayer or some eidetic savant. He’s just covering his bases.

I leave the car. The city always seems more desolate than the surrounding desert. This night, for the first time, the stars seem plausible to me.

I pass a small apartment complex, the Indio Estates. It consists of four units, each dark, and in front there is a little boy, playing by himself on the sidewalk. I look around. Silence. He is moving a toy helicopter around, weaving it through weeds that poke up from the cracks.

“Are you alone? Where are your parents?”

This brings him back to dull reality. He points down the street, and I tell him I’ll walk him there. The journey takes longer than expected; the helicopter, it seems, is incapable of traveling in a straight line.

We reach our destination. The building, despite towering above the neighborhood, seems almost invisible. The boy doesn’t say goodbye, just runs into the shadows of the courtyard and disappears.

I stand there for a while, looking up. The glow of a TV in one window. A mirror in another. Nowhere, a person to be seen. I’m bored, but then, I see a man on the second floor. He appears to be levitating. His eyes are closed, and his prostrate body is rising, slowly, toward the ceiling. Is this a trick? I move closer to investigate, to see if someone is lifting him. I am bathed in light from the window, exposed and straining, and that is when a woman in a red robe looks back at me, frowns, and pulls the curtain closed.

Marion Kadi is a painter, illustrator and designer. She grew up in France, where she studied type design. She currently lives in Paris and New York. She co-wrote a book about Isaac Newton, but it’s fiction (Les Petits Platons, forthcoming).

Keith Wagstaff is a writer living in his native Los Angeles after spending nearly a decade in Brooklyn. His work has appeared in TIME, The Village Voice, GQ, NBC News, VICE and The Wall Street Journal Magazine, among many other publications.