I hadn’t expected the land to fight so hard against

the farm – at sunset we slept, and by sunrise

bugs were eating the kale, rain had split the tomatoes,

deer graced their long necks over the electric fence

to part their mouths around corn.

In the stink of it, the heat, Ellen humming some long-

as I knelt in hot sandy soil, planting roots of ginger

two knuckles deep. The ants raised blisters on my thighs.

A little piece of heaven, she said the farm was, and divorced

bearded, big laughed – together we climbed into dumpsters

What does it take, to nourish love. Or a child,

until it emerges from one body into its own?

the spotted beans, their dried-out stalks

heavy with seed pods we would break open,

the soil beneath them charged with

the nitrogen the roots had fixed behind.

Even the tomatoes reminded me of women,

One of my students disappears underground

into the subway, carrying her mother’s purse, wearing cream-

colored high heels. She reminds me of Ellen – the black hair,

a wildness that’s hard to explain but exists as solidly

as a granite stone flecked with mica, flashes of light and black.

In one picture, hanging in the Laundromat, she’s posing

for fifth-grade graduation. In another, she’s grainy,

her body a newspaper comic, one hand closing the door

of her apartment building, caught by security camera.

In this city, rivers open their mouths, swallowing each other,

joining, and the harbor says to the rivers, come here,

and the ocean to the harbor says, come here, and the moon pulls

all of the water on earth with it without saying anything,

just doing, moving its silent way across the sky

which is turning from purple-brown to light blue in morning.

from the fire escape to inside – no matter if they die

without sun – and sets up watch in their place.

Wears a red shirt that everyone’s eye rises to,

a red bird against the faded building. He meets my gaze.

Fourteen, and she eleven. When she comes home,

she won’t say where she’s gone, is no snitch. She pulls

a baseball cap over her eyes, doodles her own name: Angel. 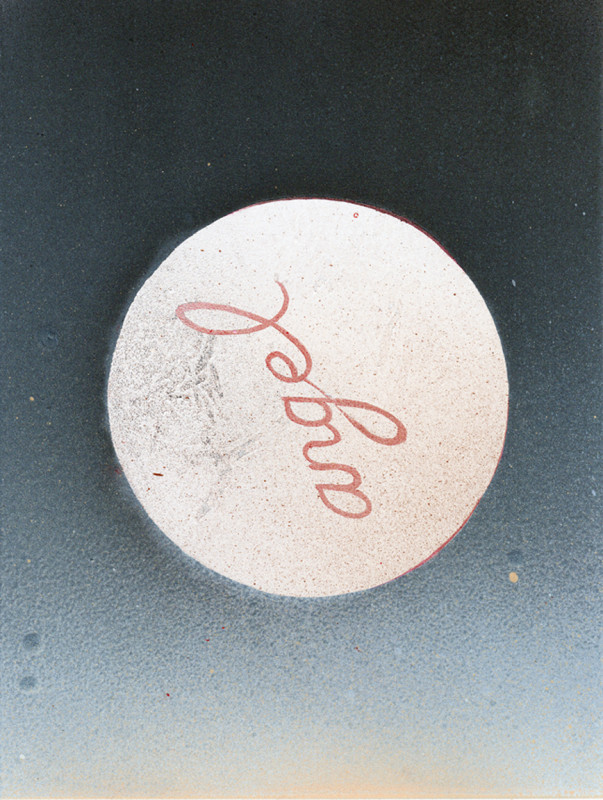 Our window faces an alley from which I can never see the moon.

Love, I beg us to move. Finger the ring you put around me and cry

which isn’t that strange — I cry almost every day. When you asked,

we were on a mountain overlooking the hilly Palouse, pine trees

rooted deep in Idaho’s volcanic soil, you said you remembered

when Mount St. Helen erupted, the ash everywhere, no, you didn’t

say that then, you said something kinder, something about us,

and cried while asking, and later I cried, and then we ate pizza

before choosing a ring. Picking out an apartment is harder.

I want a two bedroom, for when a baby comes, but that’s far off,

or is it, it doesn’t have to be, it can be close once we start trying,

but we haven’t started yet … Yesterday, one of the tiny kids at work,

not Angel, her mother pulled her out, one of the little ones, fell asleep

sitting on my lap, one arm looped around my neck, her breath hot

on my chest, sticky bangs plastered to her forehead. Leslie Jamison

was there, reading from The Empathy Exams — But I believe in intention

and packing our bags

and leaving our worse selves for our better ones —

which is true, but I can’t tell my worse self from my better one. Can you? 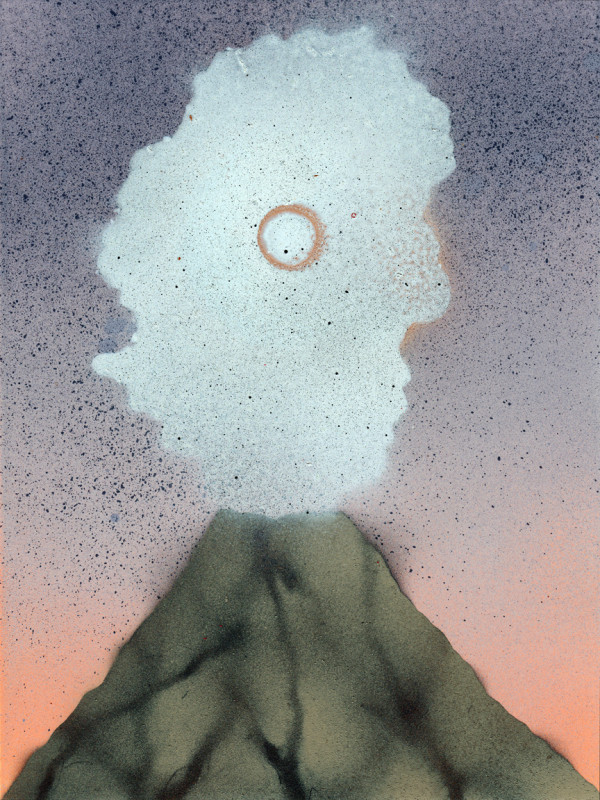 This morning, I dreamed of a café where the walls

were steamed light blue from the heat of our breath,

our food. A friend walked by, on the other side,

and I banged on the glass to reach him, did he hear …

Choices branch and then reunite until dreams end,

as they all do, in waking. I saw Seattle’s hills, I was there

for a wedding, in a hotel, another man was there,

he said he’d buy me two rings if I took off this one,

said he had pictures of me I don’t remember

him taking, they’re already online. But I wasn’t scared.

The bridesmaids eavesdropped on conversations,

butts planted on the soiled carpet that covered

the spiral staircase. The other man and I opened doors,

looking for an empty room, he wrapped his arms around my waist.

My mother saw him but thought he was you.

I was the only one who could tell you were different.

Here’s what happened before the dream happened:

I woke at 2 am and felt the rubber band around my chest tighten,

I wandered the house with the mice, I made soup

from corn cobs and black eyed peas. At sunrise I cracked

the door and watched you sleep. When you opened

your eyes I joined you in bed, and when you rose

I placed my face where your body had been and felt

the boundaries between our living dissolve. 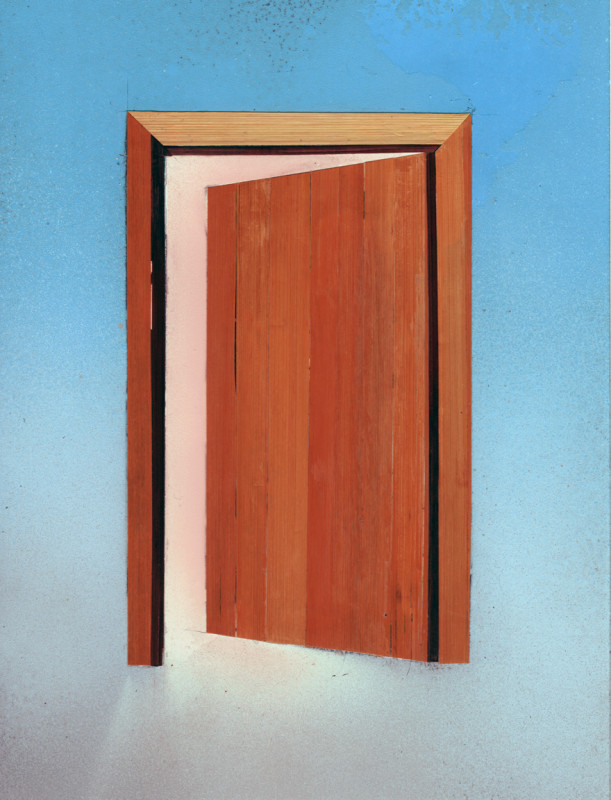 After heavy rains, the tree roots crack the sidewalk open.

It hinges like a door, ravines tracing the outlines of a map

I’m learning how to read. I thought of how a river

deposits sediments, and those sediments change the river’s course.

Am I only thinking these things because it’s so hard

to find your way underground? Like something has to guide us

in between subway tunnels and sewer lines and the water pipes

and if I could only find that blueprint, spread it out over the roof

and make my way along its hard-edged lines there would be an answer.

Angel came back, for a moment, holding a birthday present

in penitent palms. We asked her to stay, to help puzzle out

a sentence from Latin into English: In vere flue lenis, et serva nivales

undas in aestate. But it was no one’s birthday, and then her mother

ordered her back home. College isn’t for girls like her, her mother

told me when I called that evening, begging for Angel’s return.

I felt a door close in my heart. Then I felt it open again.

The rains here water even dead languages. They find soil

where it seems like there was none, and roots grow. 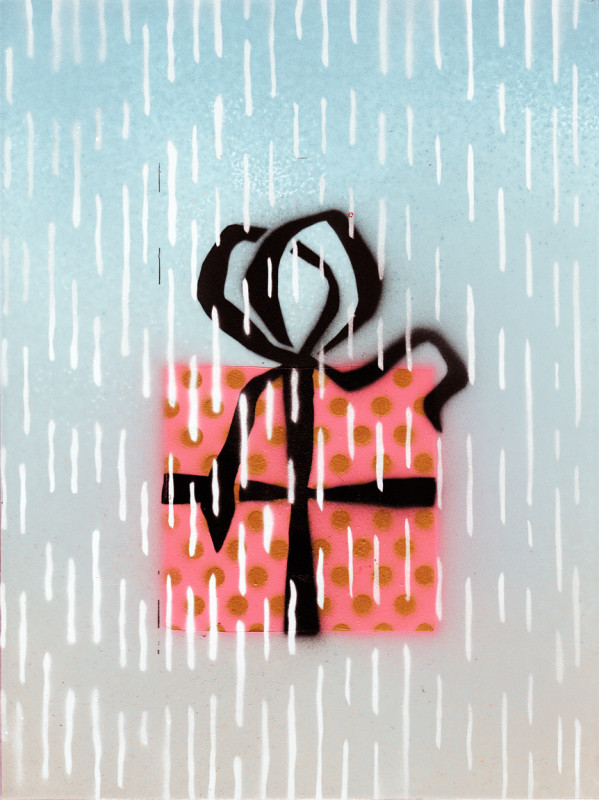 Ellen’s wedding was far from the farm, it was on the ocean,

and I stood, my hands holding the flowers she grew, trying to see

their faces as they promised love. Years before,

we were in the park, high on mushrooms, when we heard the news

that Osama bin Laden had died, his body thrown

out of a helicopter into the ocean, no final resting place, no grave

as gift, and we felt, then, that the blanket we were sitting on

was a very safe place in a world that expanded all the time,

a world ballooning with violence, and we resolved to stay

on our square as long as we could, watching the clouds turn

from one creature into another. She was my next-door neighbor then,

her front stoop overflowing with potted plants that climbed

the fence between her place and mine. Inside, a spider plant

hung under a skylight, spilling into air. When she left New York

her love followed her, and they wed and divorced all in short time.

I try not to think too much about what makes a love end.

dropped from the sky, from helicopter into a deep blue sea.

The eyes of the soldiers were flecked with gold, their bodies

carapaced. I felt poisoned the next day. And he was still dead. 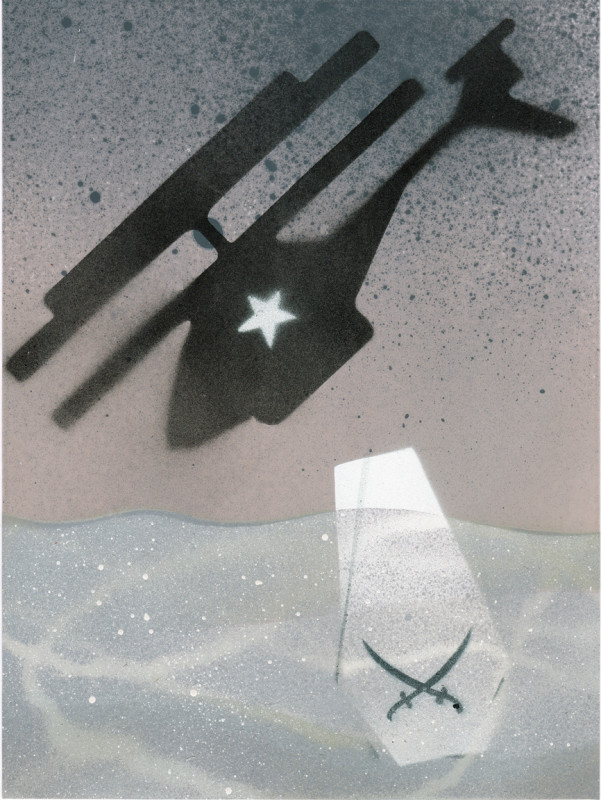 The summer ends. I say good-bye to the camp kids,

to record them singing tu es sol meus, my only sunshine.

You come on the last day, the trip-to-the-beach day,

and we stand holding hands, a border for tag, near

the waters of Jamaica Bay. The city’s skyline floats

from the ocean. One city sinks and another endures.

The world continues to roll over, turning toward

the sun, and terrorists strike Paris. I think that my body

can be a gift, the kind of gift that emerges when refugees

float across narrow seas to reach safe banks. We want

a refuge. We want a family that can swim together.

We want life vests and a cell phone kept dry

in a ziplock bag. That sea wasn’t only bin Laden’s grave,

after a heavy storm. I don’t know what it’s like

to flee from one world to the next, but I expect that –

like dream – one can call back. Text and say,

are you there. Paris, painter of these pictures, did you feel

your city shudder? And Paris, who caused the Trojan war,

when you sail between these Greek islands, propelled

by Helen’s beauty, the whims of the gods, do you

shudder as the motors of inflatable rafts are dropped

into water? Are these harbors full of ghosts?

What rivers do we cross to find each other? 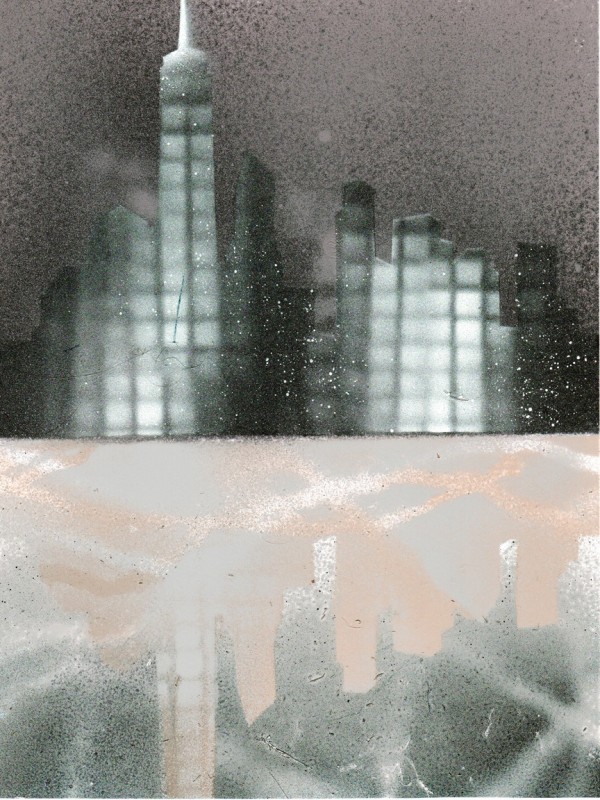 Monica Wendel was born in Long Island, New York, and holds an MFA in creative writing from NYU. She is the author of No Apocalypse, winner of the 2013 Georgetown Review Press Poetry Prize. She is also the author of two chapbooks, Pioneer and Call it a Window, published in 2014 and 2012, respectively. Her poems have appeared in the Bellevue Literary Review, Rattle, Drunken Boat, and many other journals. She is an assistant professor of composition and creative writing at St. Thomas Aquinas College.

Paulin Paris was born and raised in Paris, France, where he studied philosophy and art at the Ecole Nationale Supérieure des Beaux Arts. His art practice, currently based in Los Angeles, spans painting, sculpture, murals, and design. His unique fusion of the Spiritual, the Symbolic, and the Philosophical in his art finds synthesis in his personal mantra: “Art is Life.” The paintings featured in “Other Islands” were created with spray paint and collage.