Crow entered the derelict farmhouse through the broken attic window. He settled on the very top of an oak chifforobe and surveyed its dim surroundings. Fluffing his feathers, he stirred up long dormant layers of dust.

The dust, made up mostly of dead skin cells, contained the DNA of generations, and all the grievances, violence and sloth and evil of those who’d lived there. It swirled like a snowstorm around the attic and the house remembered.

Now a young couple had purchased the farmhouse for next to nothing and had set upon fixing the place up. Crow saw the two of them earlier standing in the driveway, the man looking down on the woman, fingers curled on her shoulder like talons. The man got into his car and drove away. She stood watching awhile, then kicked at the gravel and went inside.

There was a whoosh down below and the sound of a woman’s startled cry. Crow cocked his head. 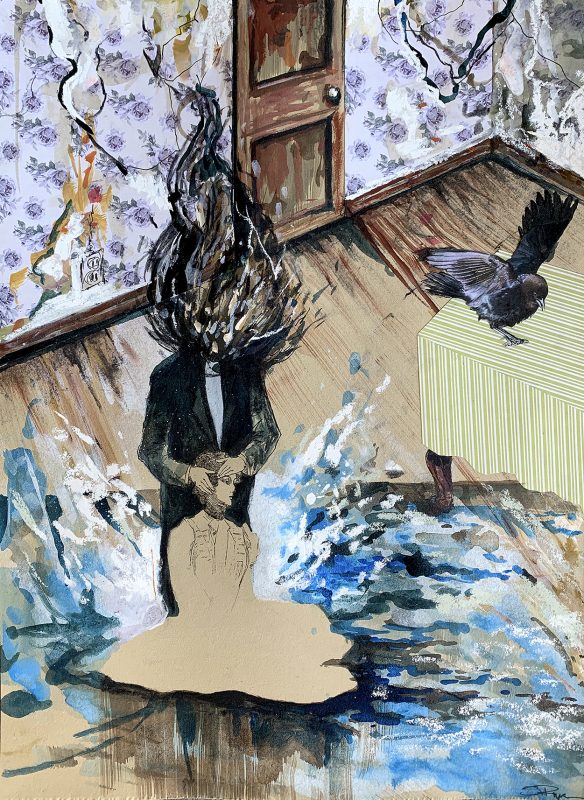 A pool opened up above me. My hair rose as I broke the surface. I felt a shimmer in my bones as they knit back together. I emerged from the floorboards through the rush of water. All around me, birds came alive from the flaking wallpaper, frantic and disturbed.

The past me and the present one melded. Though vaporous, I felt strong, powerful, in a way I never felt when I was alive. I hung there, partially suspended. I had no eyes, but still I could see.

In the chaos of the coiling water and the darting birds, a solitary crow peered at me from his place on my grandmother’s chifforobe.

Though he didn’t speak, the crow had a lot to say. 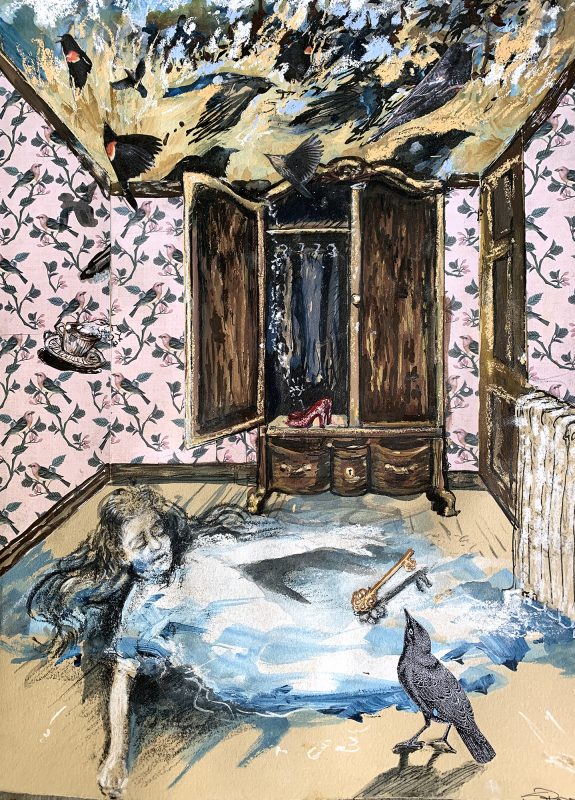 Who I am is not important. His feathers twitched. All this dust is ghost stuff. Everything that haunts the living is inside it. There’s a woman downstairs who is attempting to eradicate it.

“I’ll scare her away!” Lorelei cried.

She hung half in and half out of the pool. She rose, grew breasts, a torso, legs. Her eyes opened. Crow stared and she yelped and tried to cover her naked body. Just then the door to the chifforobe swung open, filled with dresses and shoes, nightgowns and sun bonnets and straw hats of all colors, all in perfect condition.

Lorelei walked on her own two legs. She yanked a frock off its hanger and quickly dressed. Pivoting this way and that, she preened before the full-length mirror. Leaning close, she touched her pink cheek.

To Crow, she was quite vain for someone who looked nothing like a crow.

Both heads turned at the voice of the woman downstairs, gently telling someone he was a good boy.

“Who is she speaking to?” Lorelei whispered.

She spun to the door, but couldn’t open it. She twisted the brass knob. She attempted to walk through the door but crashed into it.

Crow picked up a gold key in his beak and dropped it into her outstretched palm.

She unlocked the attic door and flung it open. Crow alit on her shoulder. Together, they descended the stairs. And as they did, the birds that had been darting about settled back into the wallpaper. The pool in the center of the floor dried up. The door to the chifforobe slammed shut.

The agitated dust continued to swirl. 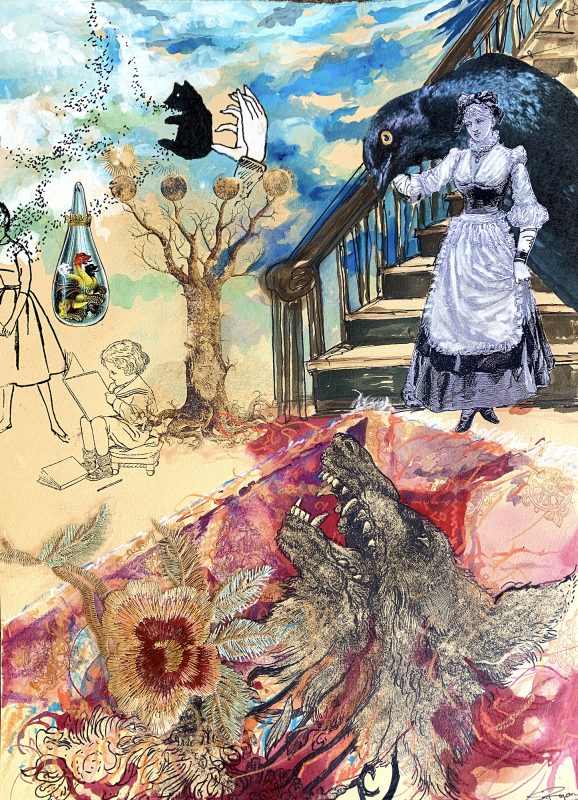 The room below came alive with ghost stuff. The grizzly my grandfather shot roared, clawing, crawling from the rug. And there was my tree, its limbs holding snow globes instead of leaves. And there were my mother’s hands, her fingers moving, searching for her needlework. There were flowers made of blood. A three-headed dragon suspended in a teardrop.

The woman traipsed around with a feather duster like she owned the place, standing on tiptoe to dust the transom, awakening even more ghost stuff. I clenched my fists. Crow dug his claws into my shoulder.

“I’d like to strangle her,” I said. But the woman looked right through me.

That’s when I saw Henry, sitting on a low stool, running a pudgy finger over the pages of his primer.

I rushed to gather him into my arms but came up empty. Again and again, my hands grasped air.

The woman turned to him. “Would you like some apple juice?”

“How does she see him and not me?”

They see only the ghosts that haunt them.

I took flight and Crow launched from my shoulder. I soared to the ceiling, hovered, then swooped.

The woman coughed. She went into the kitchen and opened a magical, light-emitting ice box.

Crow landed on the woman’s head, clawed at her hair. Absently, she ran her fingers through it, then took something from the ice box and closed the door. 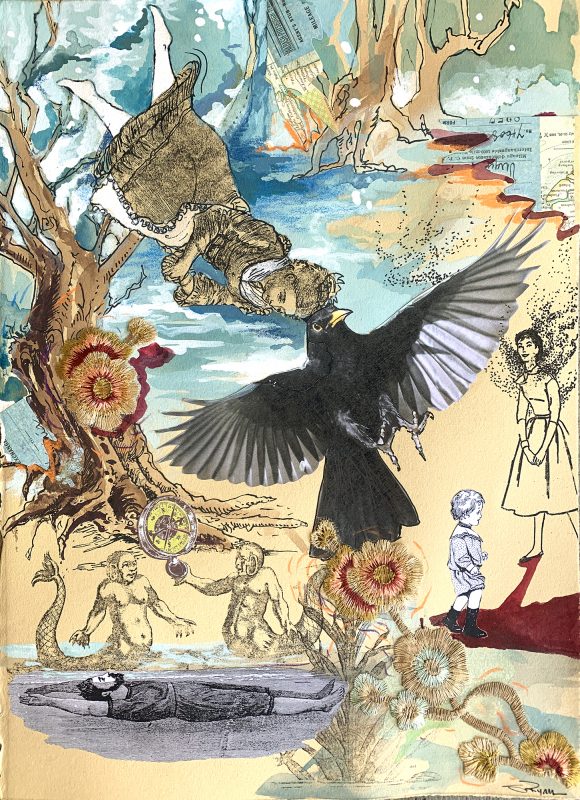 Lorelei slumped on the floor, arms draped around her ghost child as he sipped juice from a straw. The woman, so small and delicate, moved—almost floated—from room to room with her feather duster. Ghosts bloomed from the floorboards and materialized from the walls. The place was thick with them. Thick, too, with loss and pain and cruelty in the form of black bugs, a species Crow had never seen before.

An ocean voyage. A man in a long, frayed black coat that flicked in the wind. A miserable and miserly, unloveable man. Compasses and ship manifests. A woman, tiny and delicate like the dusting woman, wearing a large bonnet. A house devoid of music and laughter. More blood flowers blossomed. Black bugs leaked from the ceiling, puddled on the floor. Once, there had been a tornado when all the others were out in the fields, even the child, riding next to his grandfather in a horse-drawn tractor. They were all sucked up into the vortex and deposited in a neighboring cornfield. The farmhouse and the young woman, the sickly one who was locked in the attic room, had been spared. She couldn’t escape.

The man in the black coat loomed.

You started all this, Crow said.

The hem of his coat danced and snapped in the cold wind that blew through the house.

Trembling, the woman laid down her duster. The black bugs encircled even her. For the first time, Crow looked at her face and understood. 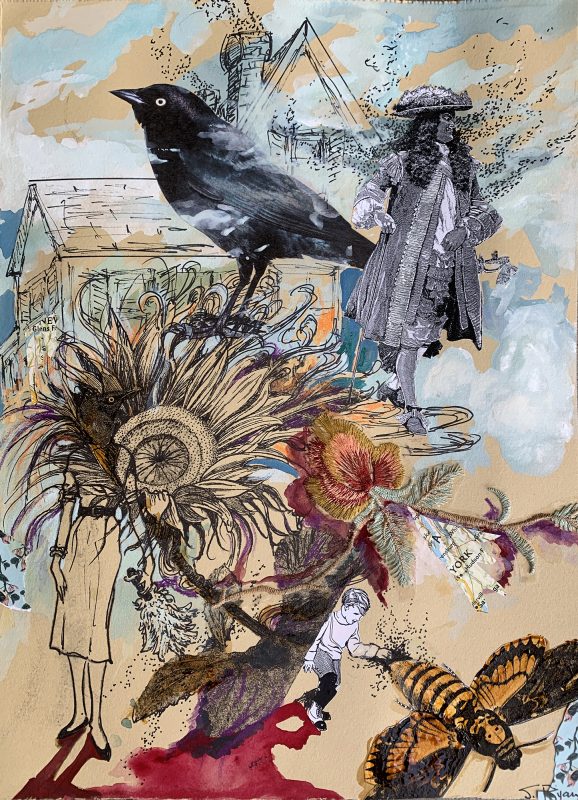 Crow lowered his beak to my ear. We have to get rid of the ghosts. Now.

“Except Henry and I.”

No, you as well. The woman’s in pain. She’s dying of longing.

“They locked me in the attic.”

Again, I tried to pick up Henry. From the rug, the grizzly snarled. The wind gusted, the snow globes on the bare trees clanged. The man hovered near. It was then I recognized the ghost of my great-grandfather. Tyrant. Misanthrope. N’er do well.

Crow spoke to him in his peculiar, soundless way.

You’re the alpha haunt. Send them all back!

We’re hurting the woman, the alive one over there with the feather duster, said Crow. Crow flew at him then, poked his face and eyes and hands.

The woman sat crumpled on the floor.

My great-grandfather thrashed the long sleeves of his coat until they became feathers. His eyes flamed. He yawped and cawed, and flapped his new wings, terrorizing the others. The black bugs swarmed out the chimney. The blood flowers withered. The other ghosts whirled themselves into mist and seeped through the pores of the house.

It was over. Or so we thought. 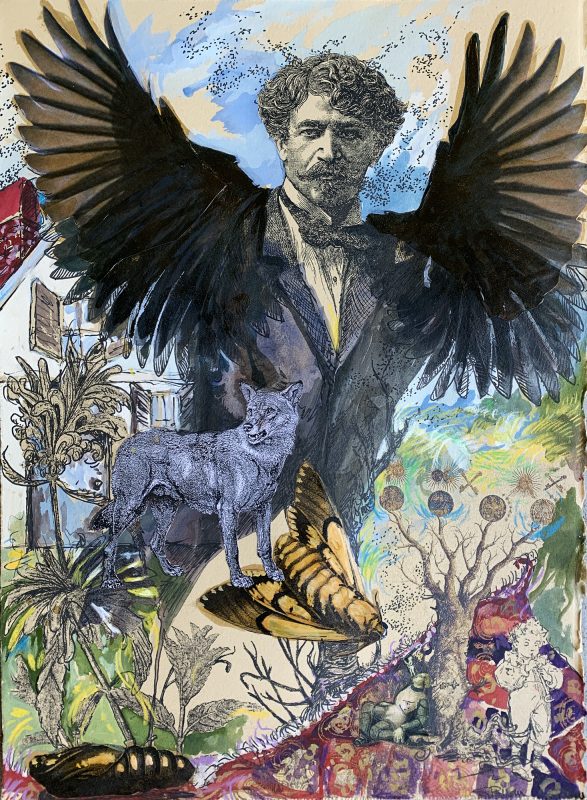 Lorelei swept up her boy and held him tight as the two de-materialized. The tiny woman lunged after them.

She and her boy dissolved into the very spot where she’d leapt to her death from the attic window so many years before. Once they were gone, an elm tree took root and began to grow. It grew so quickly its limbs creaked like bones.

The woman scrabbled in the dirt until her fingers bled, begging them to return. And as she dug, the house, swept clean of dust and ghosts and tyrants, began to forget.

It forgot the sickly young woman imprisoned in its attic.

It forgot all the diseases; the difficult, fatal births; all its crimes and jealousies and regrets. The broken dishes and fists through walls.

Amnesic of its pain, the house became new again.

The woman rolled onto her back, eyes closed, chest heaving. Crow flitted about, unnerved. What would become of her now? In the absence of haunts, what becomes of the haunted?

The elm tree had now grown as high as the highest peak of the rooftop. Crow alighted on a branch level with the attic window which he found curiously still broken, displaying toothy shards of glass. He heard a car approach up the gravel driveway. The husband. Of course. Crow tilted his head to one side and considered. 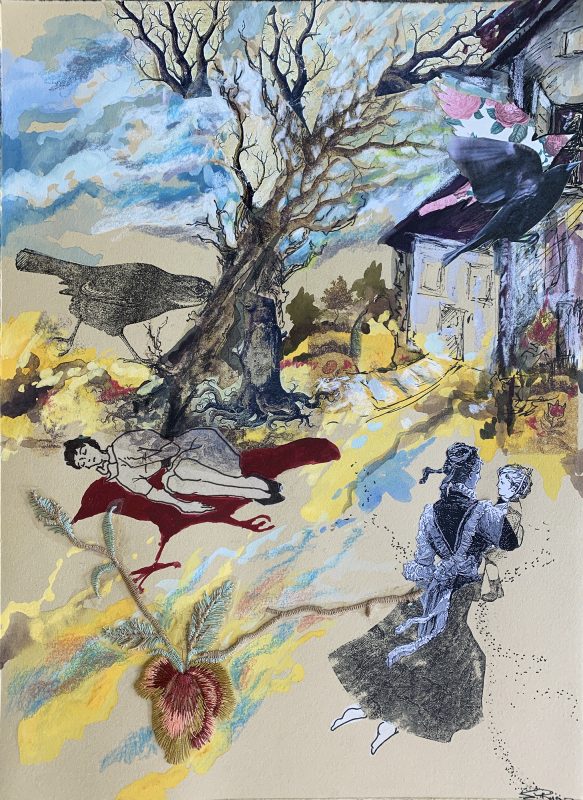 Kathy Fish has published five collections of short fiction, most recently Wild Life: Collected Works from 2003-2018 (Matter Press). Her work has been anthologized in Best Small Fictions, Best American Nonrequired Reading, and a forthcoming Norton Reader. She is a core faculty member for the Mile High MFA at Regis University in Denver, Colorado, and teaches her own intensive online flash workshop.

Stephanie J. Ryan is a professional studio artist and Professor of Art in Drawing & Painting at California State University-Fresno. She is a prolific artist, whose work has been widely exhibited nationally and internationally, and is included in numerous public and private collections.