From where V. stood, the overpasses blocked out the sun. They began about fifty feet up and continued on, level by level, delineated by altitude and slight changes in the shades of the materials used. Viewed from the air, he assumed, they would resemble some sort of ludicrous concrete quilt, stretching over miles and periodically dotted with vehicles and cracks and, in a few cases, wholesale chunks taken out. The concrete that had fallen had been further shattered and carted off, used for dwellings or art or iconography. He didn’t know, or he couldn’t be bothered to know, or he simply didn’t care.

Some years ago, on a fishing expedition fifty miles downriver, his friend P.X. had advanced a spurious theory of housing that had involved these very overpasses. Hang trailers from them, P.X. had said. Wrap them in chains and let them dangle, hovering just above the ground. Stack them, even. Let them become modular. P.X. had heard that this was all the rage somewhere in the world where the infrastructure had become similarly overbuilt. When pressed on it, P.X. could offer no specifics, could not assign China or Peru or Bermuda or Finland as the originator of this ostensibly innovative concept.

V. wondered what this would look like in hundreds of years. He dreamt of it as a kind of cathedral; he imagined it in ruins. It was already proceeding in that direction, he thought. He heard the sound of no passages coming from the structures above him–which was unfortunate, as it was a very particular sound that he was waiting to hear, and a very particular object that he was waiting to receive. And so he went on his way, disappointed. 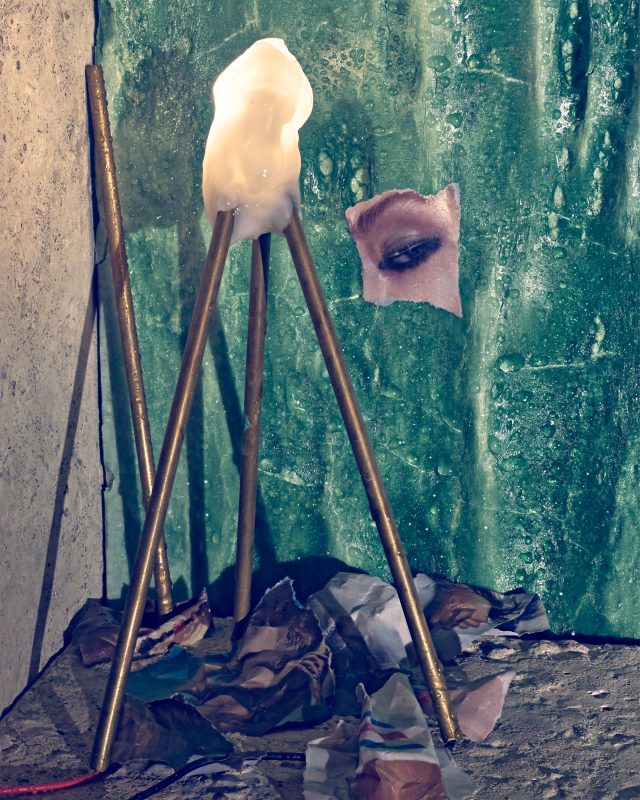 The clouds above V. had parted, and now a late-spring heat had emerged to surround him. It was the kind of humidity that left him feeling surveilled and surrounded. Around him were open spaces and open fields and the open sky, forty feet or more on each side before he could careen into an object. He had long since passed structures that provided shade in which he could take shelter. He was now in a space much more stark, and yet he couldn’t shake the sensation of being in something’s gullet.

V. could see the general shape of the altar in the field a few hundred feet away. The last time he’d passed it it had been blessedly ersatz, a tremulous monument to something uncertain. He’d thought that it would have crumbled by now, or that it would have at least been desecrated in some way. This was the fate of most small-scale structures in this part of the city–outright destruction or fodder for reassemblage.

There had been offerings left here before, but nothing lay on or under the altar on this particular day. Instead, the grass around it had been meticulously burned in a grand and slender circle. V. imagined someone on hands and knees, magnifying glass in hand, using sunlight to singe individual blades of grass. There were drunkards and obsessives he knew who would have delighted in such a pastime. It was the first instance of such burning he had seen. This didn’t mean it was the only one in the vast city or its outskirts, but perhaps it was. Or perhaps it was the herald of something to come. 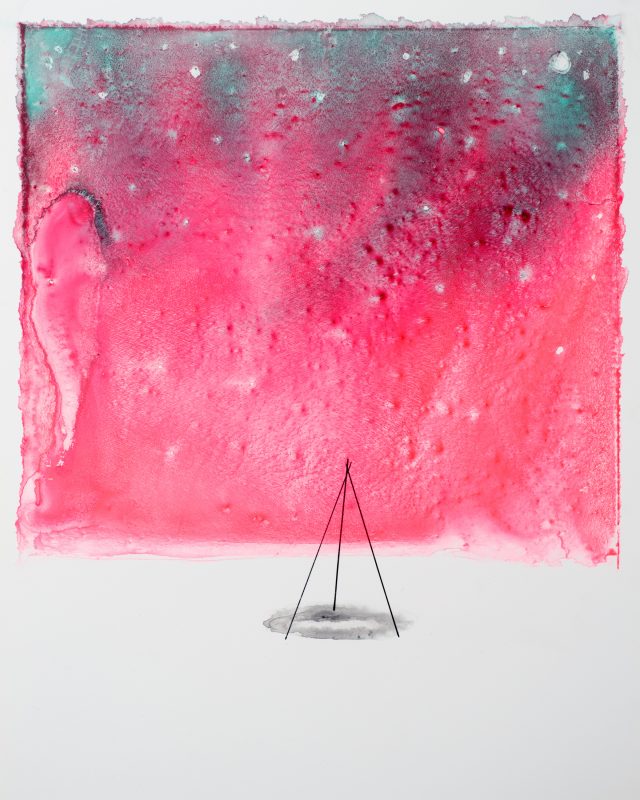 The world around V. split. The ground below him felt sun-heated, treacherous and hissing. He could see stars in the sky as though some sort of strange-hued curtain had descended. He despaired at this fugue; it was far from his first. His vision had been suffused with blood before, and his limbs had shrieked at the greatest of losses cast down before him. He wanted somewhere to sit and shelter himself for an hour or so, to mull over the day’s thoughts and wait for perception to normalize. He had no such luck; he knew this meandering landscape too well. There were structures in the distance, elongated and familiar, but nothing that would prop him up, nothing beside which he could rest for a spell.

He’d dreamt of these structures once, and had regularly gone out hunting for something in them that he could savor. That had been years before, when he’d still been running with P.X. and traveling around the state’s waters, seeking peace and refreshment. He was a half-assed amateur mystic then, a blip in his history. Now, he wandered and sought artifacts in solitude. Most days he felt done, and yet he continued with these walks, continued hunting for hidden aspects of the city’s renewal. He was weaker now. He had these spells; he had these instances of perception splintering and then converging once more. He called out for reinforcement, but none came. But then, none would.

The ground below him no longer felt searing, but the stars above still seemed to be pinned uncertainly, soon to fall. 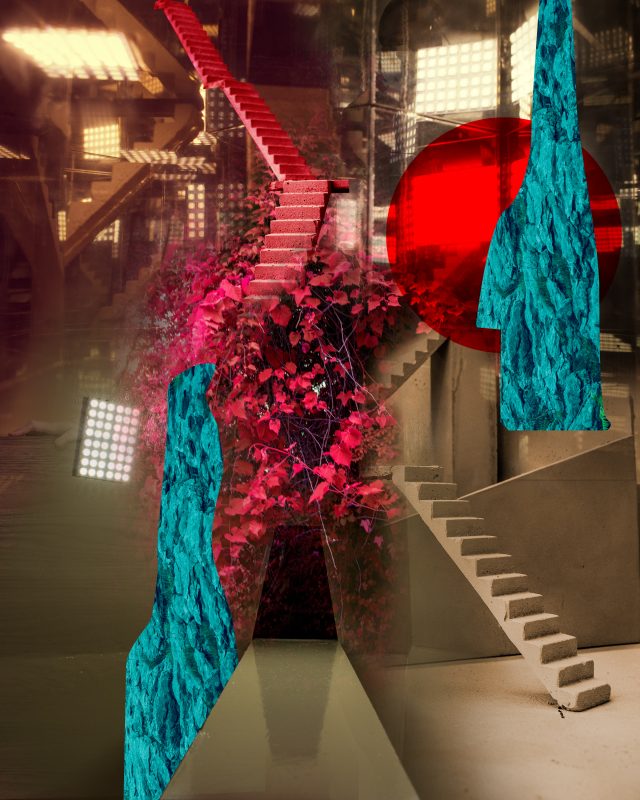 Now it happened that V. was fragmenting. Turned delirious from the heat and the sky and the walking. Arrived at a factory or some structure’s shell or a vintage clutch of gear and garb unsuitable for salvage. Stumbled in with a varicose stride. Consciousness went kaleidoscopic, all sense of perspective lost. The sense of piloting his own body remotely. The sense that his eyes were no longer in tandem, that his vision was no longer reliable. Colors burst and blossomed as he scanned the space.

Strewn across one wall of the building, words: “The sharp goners seemed delectable.” At least here there was shade. V. sprawled. V. wondered if there might be water somewhere in here with a modicum of clarity, or if this was one more way station on his errand.

Elevation seemed a path, too. Elevation or observation.

He wondered how much of the building was still intact and how much had given way to nature. He’d heard about it once, he recalled, from a forager friend of P.X.’s called Es. She’d foraged by choice. Late one night, quick-distilled spirits in hand, she’d spoken of the factory in moderate terms. So this was the place, then, or a place like the place.

Here he was, V. in repose. He found some water and drank it and felt sated. He remembered why he’d come.

V. sized up the strata and put his ear to one cold concrete wall and listened. 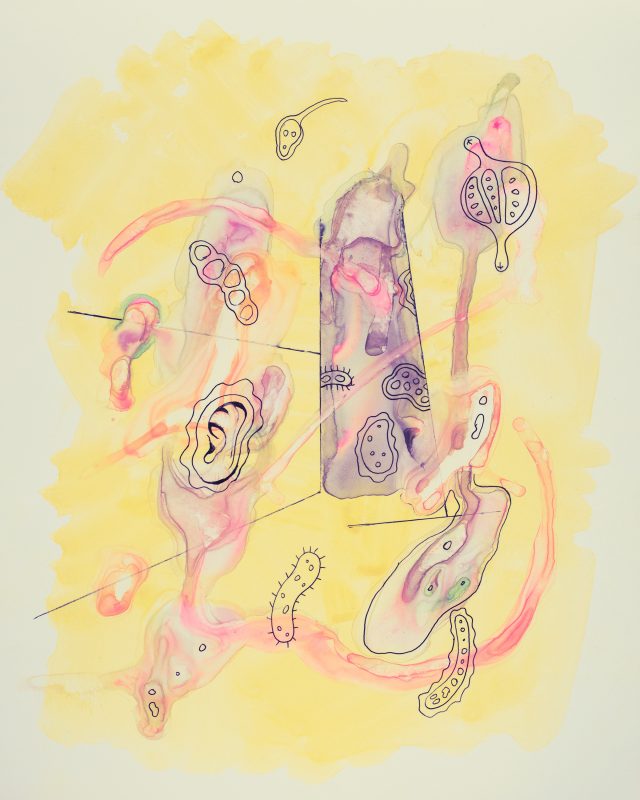 V. could hear the keening coming through the walls. As he rested the walls felt porous to him, like organic crystalline structures, like something he saw once in a nightmare where he was wearing winter gloves and tore a hole in one and it in turn tore a hole in his hand and inside his hand was something mineral, some hard fungal stalactites, a lunatic’s landscape below his flesh.

The keening became winds and the winds became a guttural kind of laughter and the laughter became something unkind, a kind of last breath, a broken gasp becoming chamber music becoming silence. He still slumped and dreamt of the absence of necessary objects.

After an hour or an eyeblink V. woke feeling ill. He sipped more water and hoped his head would soon stabilize. There were stairs leading above, and he heard the faint sound of the wind making some signal in the upper reaches ring. Chimes or bells or something suspended and resonant. He stretched and felt his body feel incomplete. He shrugged and creaked and angled his joints and wondered if some part of him would crack and bend in the worst of ways if he continued his motion.

He walked towards the staircase. As he moved he felt the room around him expand as though he was in the lungs of some mammoth creature taking in air. He seemed a reduction of himself, a distillation, an object on an unobstructed path. There were the stairs, this was the walk. He began to ascend. 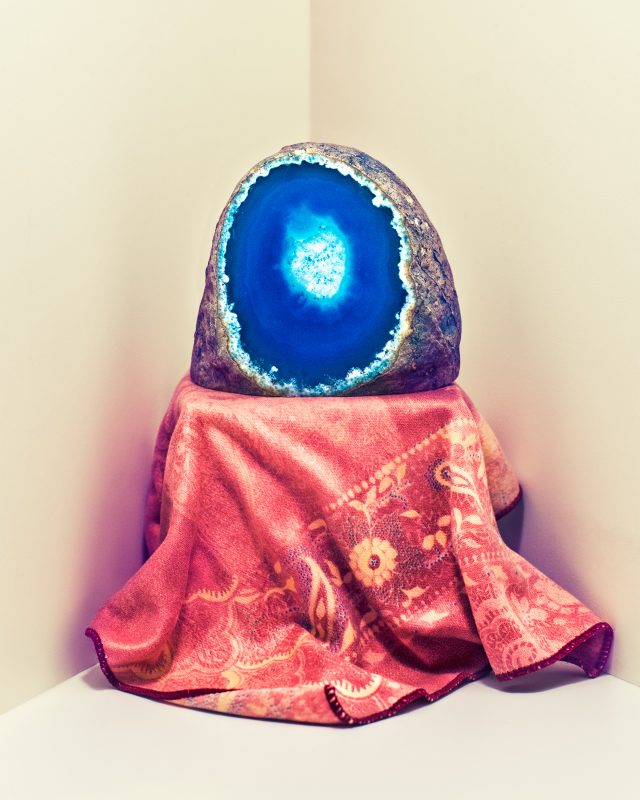 At the top of the stairs there were more stairs and after them, too, were more stairs and V. kept on walking, up and up and up, fever or fatigue or hunger distorting him as he went, his hands sliding up bannisters and some low-level part of his mind wondering what his touch might encounter, if it might be splinters or rust or barbs curdled upwards out of some substance and if his skin might be broken and if infection might come to his blood and his organs and his mind. This was how he went and how he felt harrowed. A coolness entered the air and swirled around him and he felt a bold confidence that there would be water when he reached the next level, that there had to be water there, water or some other form of refreshment, something that might anchor him back to normalcy and give him a decisive pause with which he could take the measure of this new environment, a lookout or a spyglass or a dancing machine which would at least provide him with some measure of entertainment. A quiet laugh. And then he was at the end of the steps on a platform that extended out just below the building’s moldering rafters, and there was a place to stare out over the city and the structures that extended the city and the lands over which they extended, and V. stood and took a long breath and felt sated and looked over the land and felt at once a shift in perspective, as though he was taking more and more of the landscape into his mind, as though he could see the edge of the horizon and the sky above it and the stars above the sky. 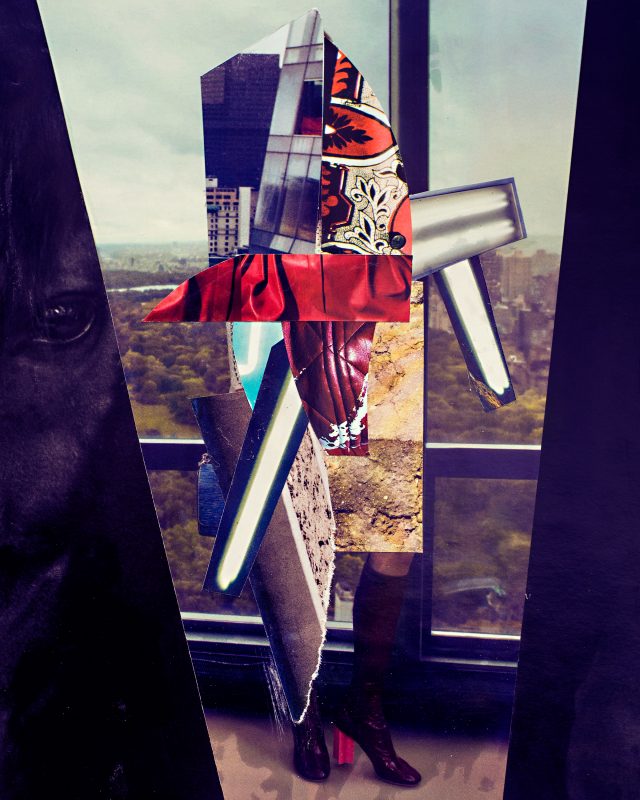 From one side of the roof, the distant city’s outline could be seen. There was a rusted staircase on the other side and V. walked towards it. He gripped the railing and raised his head to take in this view for the last time ever, or the last time today, or the last time this year. He might circle back to it, he realized. He might corral P.X. or Es or some other associate and venture back into this stretch of land, near the concrete that had been built atop concrete and the altars that beckoned in open fields.

Circumstances might change. He might settle elsewhere. He might opt for some form of departure, if such a thing could be wrangled in this present moment or in a moment to come. For now, he walked down the stairs that straddled the building’s side. They were metal and hardly rusted. Briefly V. wondered if the space had a caretaker, or if the seasons’ shambles eluded it through luck, though discreet mechanisms, or through some bold defiance of logic.

He walked down and saw the eventide land spread before him. There was a tavern a few miles off, he saw now, somewhere with a proper bed in which he could rest. He had stayed there before; he recalled. The object of his foray into this space near the city remained lost, but he had learned some things; he knew now, at least, some places where it wasn’t. Absence was nearly as good as presence, he told himself. And then he walked away from the city and towards something else, something unknown, something that wasn’t yet absent or present. He walked towards a dream, towards a space, towards another step. 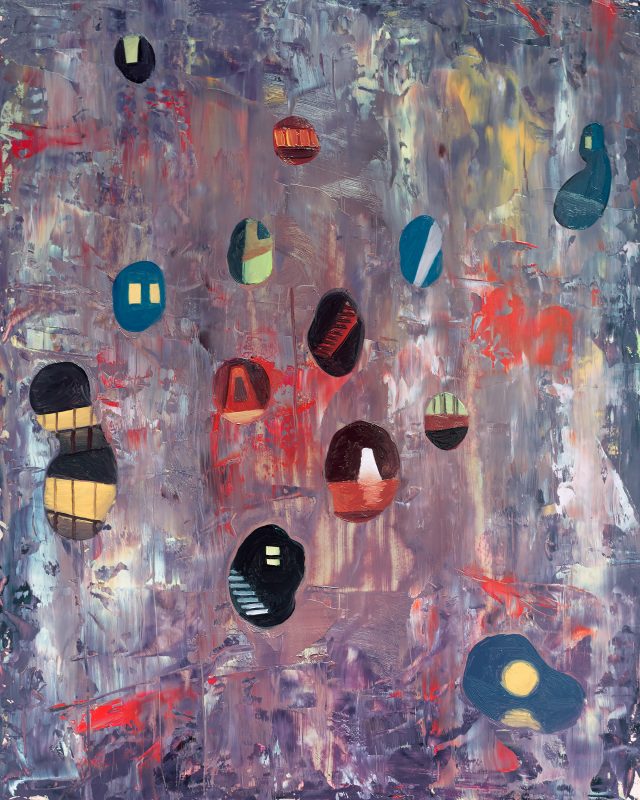 Tobias Carroll is the author of the novel REEL and the short story collection TRANSITORY. He writes about books, music, and food for a variety of places, and is the managing editor of Vol.1 Brooklyn.

Jeremy Olson is a Brooklyn-based artist working in painting, video, sculpture and photography. These practices are linked by a common interest in the built environment, animist objects, and the various ways that images shape desire. His work has been exhibited in New York as well as Antwerp, Baltimore, Berlin, Melbourne, and Seoul. He has participated in residency programs in Florida, New York, Nebraska, Oslo, and Michigan.