There’s a restaurant on the outskirts of the cemetery that serves meat exclusively from malicious animals. My friend Jake and I were having dinner there one night, when, peering out at the gravestones, he asked why it was that whenever someone described seeing a ghost, it was in Victorian era clothing. “Where are all the new ghosts?” he said. “The young ones.”

“Where do you go to find a new ghost?” Jake said.

I thought about this a moment. “Well,” I said. “I guess you can go anywhere.” So we went to the skate park. 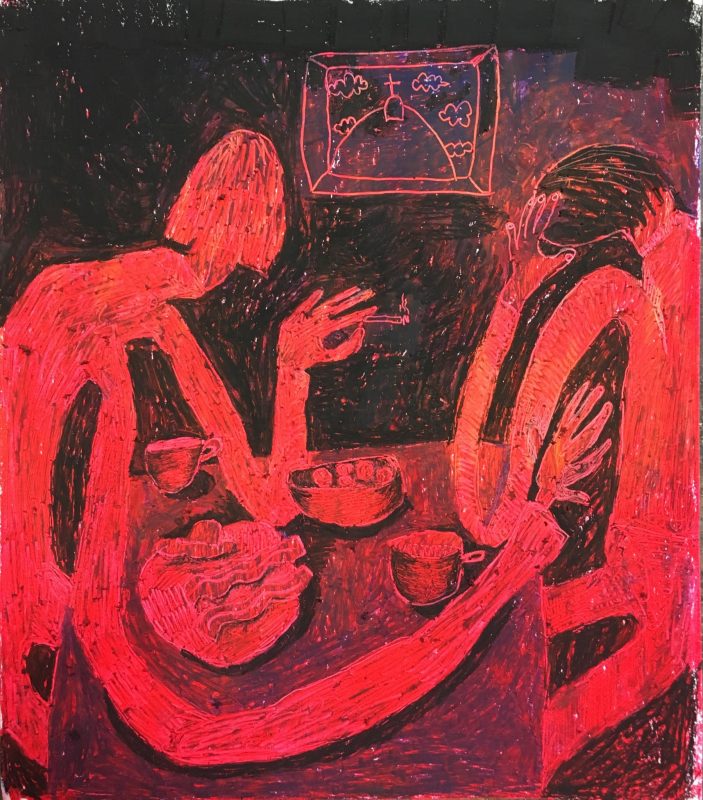 We walked the whole way, cutting through the cemetery, over the highest hill with its singular cross, still held together despite deep cracks in the stone. Jake flicked his cigarette into the dirt and stomped it out. Considering the corpses at rest, I picked up the butt and placed it, still hot, into my jacket pocket.

We made our way down the side of the road, silent, until we reached the skate park. There were a few teenagers left, propelling down concrete hills through beams of moonlight. Jake and I sat on the ledge and waited as the kids left, one by one, and with them, the sounds of their wheels. For every kid who left, the sound of four wheels left with them, until we were down to one kid and eight wheels.

Once the final one left, we sat alone and listened to the friction of a singular skateboard on the half-pipe. We tried to get closer to the source, but the sound came from every direction like an explosion traveling backward into the center of our heads. Eventually, the sound got quieter until, after about an hour, it was reduced to nothing. 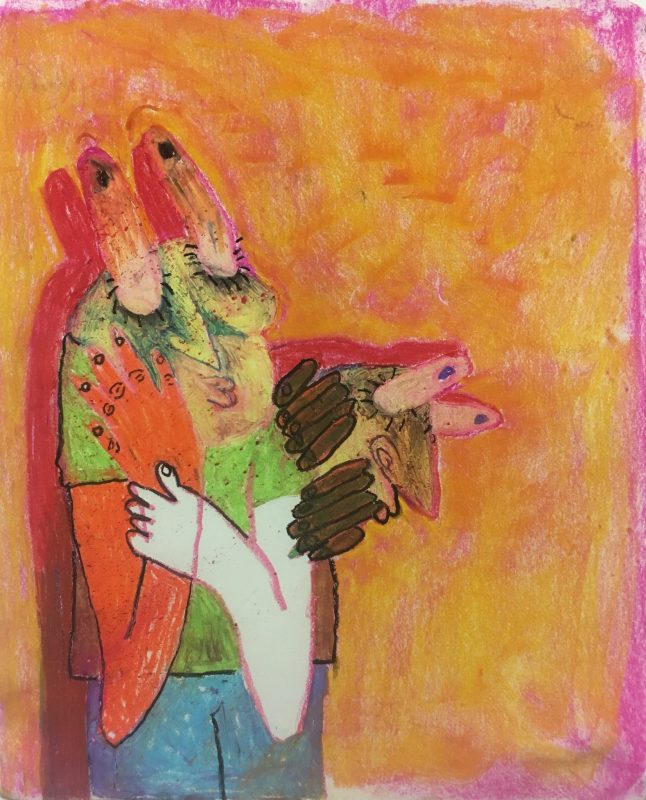 Jake mentioned a kid who had drowned at the country club he used to swim at with his family. It had been years, but he remembered it clearly; how could he not? The kid had broken in one night, removed the tarp over the pool, and swam alone in the dark. He’d somehow got his arm tangled in the rope separating the shallow end from the deep, and with no one there to help him, he eventually ran out of energy and could no longer tread water.

We hitched a ride and found the pool empty. The club didn’t seem to be in operation anymore. We climbed down a rusted ladder into the pool, which was now just a dark room deep in the middle of a field.

“I don’t see anything,” Jake said.

We waited there a long time—long enough for the moon to continue a few feet in its arc across the sky—before I felt a deep pain in my right arm. It started at the shoulder, like the throbbing pain that comes a day after working out. Then it moved into my bicep—tiny biting splinters that multiplied in their descent until, finally, the burning made its way to my fingertips. It felt like all the heat of the earth was in my arm. We climbed back out of the pool, me using only my left hand, looping it behind the rungs to pull myself up each step. We kicked the door in at the concession stand to see if there were any abandoned first-aid boxes, but before we’d finished looking, the pain was gone. 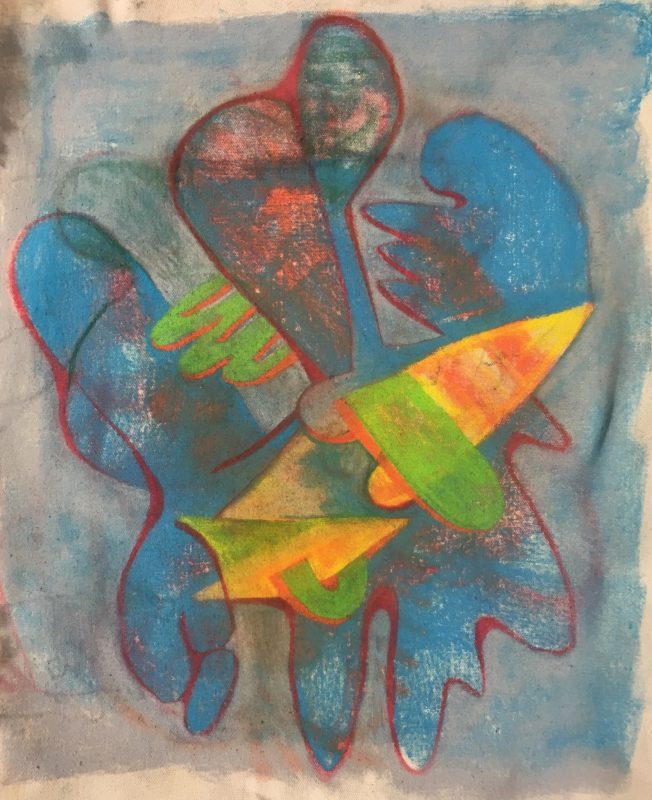 It took a while of walking before we found another ride back to town. The driver of the pickup didn’t ask where we had been or why we were out on the dirt road near the country club, but when we got out of his car and thanked him, he yelled at us for getting his seats wet even though they were completely dry.

These new insights had begun to weight on my mind. Life, it seemed, was no longer a straightforward collection of living souls, but rather a muddy clutter of life and death both acting as life. It struck me that this was the way things had always been, and once we had made the decision to see it, it was all there out in the open—that more people would look if they knew, that I had always known but chosen to forget.

It must have been very late at that point, but neither of us were wearing watches. It was a Friday, so the street was busy—crowded with people weaving in and out of bars, clubs, and restaurants.

I smelled coffee and immediately knew that what I was smelling was a memory, not an odor carried by the air. It was a dark roast with hints of vanilla.

“Look over there,” Jake said. “There’s a guy peeing on that building.”

It was only a few blocks to the waterfront. We jumped the barrier at the side of the road and traversed the steep hill, muddying our shoes. The autumn wind blew cold, and I considered how numbing the water must have been. Everyone in town knew to not touch the water, though. What should have been blue was a deep brown like the bark of a tree.

“It’s water. There are always ghosts by the water.” I understood this the way baby spiders supposedly understand how to look after themselves the moment they’re born—how they have all the knowledge they need to survive, mystically granted to them instantly.

We watched as a round, green stone emerged from the rushing water. As it continued to reveal itself, I realized it was the snout of an alligator. It crawled into the dirt, facing us, and then my vision went dark. When I could see again, there was a woman standing where the animal had been. Her skin was purple and her bare feet dug into the dirt like claws.

She must have been in her mid-thirties when she died. I approached her, intending to ask what had happened, but she bent down, lifted my chin with subzero fingers, and kissed me on the mouth. I stumbled back, confused.

After a similar dark flash, we watched her tail disappear into the rapids. 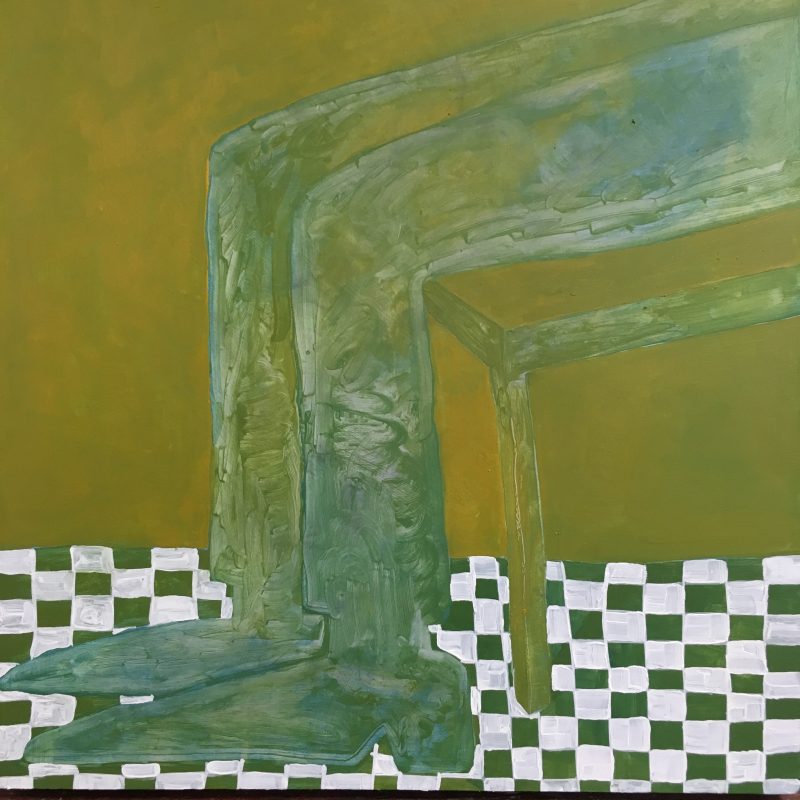 We warmed ourselves up with coffee at the 24-hour café. I took mine black, and Jake mixed his with a purple honey the baristas claimed had been donated by bees. An elderly lady, with her gray hair in a bun, sat across a table from a boy who couldn’t have been any older than twelve. They were playing chess, and from my limited knowledge of the game, the boy was at a massive advantage.

“These baristas are like mermaids,” Jake said, sipping his coffee. “I know them all by their first names, but I’ve never seen their legs.” He licked his lips, now purple from the gifted honey.

I was tired. The night felt like it had lasted weeks. There was a scurrying beneath the table next to us that I thought was a bug at first. After focusing my eyes, I realized it was a shoe—the shoe of someone who was clearly not sitting at the table. “We’ve got a live one,” I said, gesturing over at the ghost foot.

I followed the boots up and saw they were connected to a pair of skinny jeans, but the calves faded into nothing. I transfered my coffee to the empty table and sat in the seat, aligning my own feet with the ghost’s. At first, I felt nothing, but when I sipped my coffee, it tasted like oolong tea. Then my organs started to shift like they were dancing with each other. This lasted about a minute, until I returned to the table with Jake. The ghost feet were now in decorative socks with little suns and moons on them, and for the rest of the night, my shoes felt heavier. 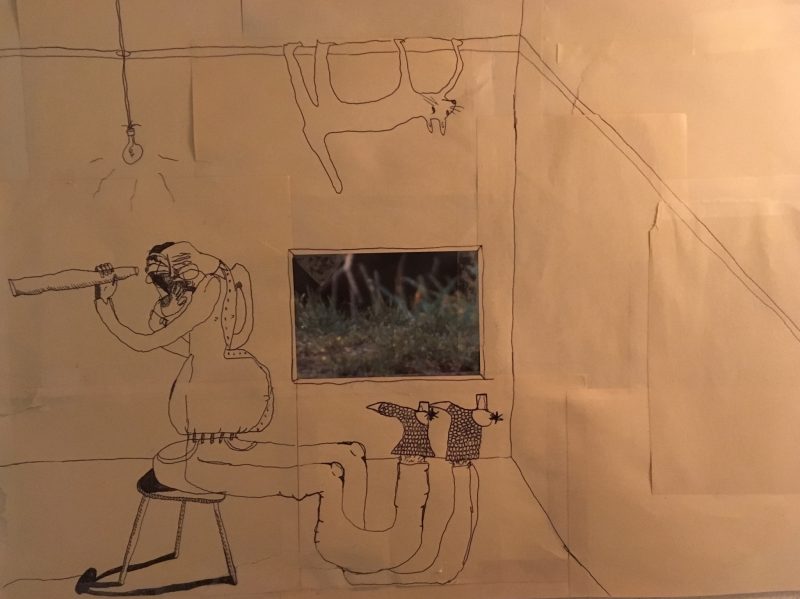 When we left the coffee shop, it was much colder out than it had been—much colder than it had any business being in early autumn. Where there had been crowds of people on the street before, we were now the only two. We couldn’t even find a cab, so we hoofed it back to the restaurant by the cemetery where we had left our cars. My shoes were still heavy, and I worried about what would happen when I took them off.

By the time we got there, the restaurant had closed, so we leaned against my rusted Chevy and smoked a couple cigarettes. The wind blew strong, but we lit them without trouble.

The sky over the cemetery had adopted a blackness that looked tangible—three dimensional—and in it, there were more stories than I could comprehend. I kicked off my shoes, and a weight left my feet like the ascension of steam from a boiler. The cigarettes kept burning, inexhaustible, until we forcibly stomped them out about an hour later.

“We did good, tonight,” Jake said.

I knew he was right, and I knew there was more to be done.

Nicholas Siegel is a writer from Louisville, KY who holds his MFA in Creative Writing from Spalding University. His fiction has been published in Palooka, Bourbon Penn, and Jersey Devil Press, among other places. He is a lover of bourbon, coffee, music, cats, and Oxford commas.

Sidney Williams is a visual artist based in Los Angeles. She is a reflection of the surroundings from which she grew up; Venice, California. Blond hairs on her head, she is a surfer, though not a tough one. She is influenced by comics, hard boiled mysteries, and the intersection of horror and kitsch found in slasher films. With an ongoing preoccupation with the macabre, Sidney paints and draws accordingly. In her work, she experiments with contorted bodies and forms. At 23, she is still afraid of the dark, though drawn to it.