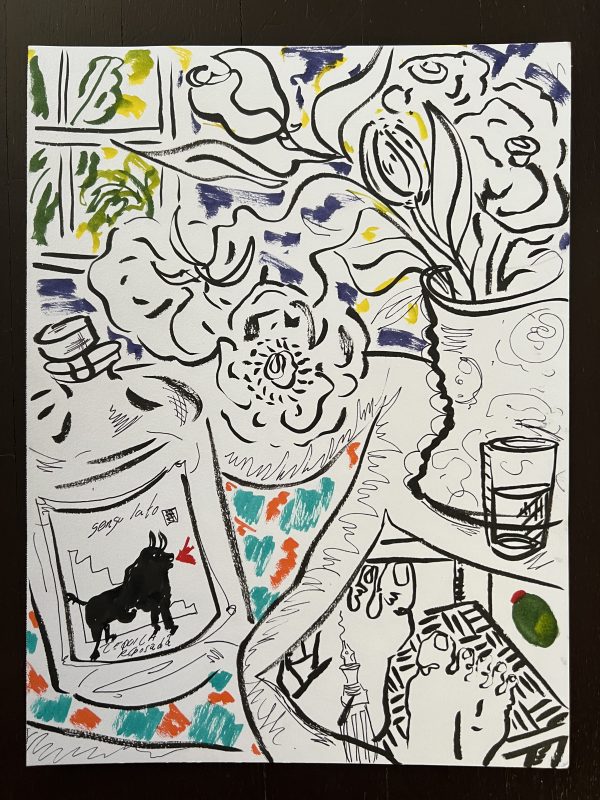 My exits are never graceful. Mariana knows this about me but she still pulls out the bottle of tequila, caked in a frosty sleeve, and pours shot after shot, then one more shot after that. And when I think we are done, the bottle fills two more shot glasses.

I am going through a breakup. Not with a guy. With my life as I understand it. Work, friendships, my guinea pig — I am tired of them all. Nothing has broken yet, so maybe it is more of a disassembling. Cutting out the bad, piece by piece, a game of Jenga.

We need to cleanse ourselves, Mariana slurs. We need a reset. She starts ordering something to eat before the puking commences. Most nights after drinking, lately, she lets me have the bathroom. She makes her kitchen sink into a grand spittoon.

The taco joint we like stays open until 2AM when most restaurants around us close seconds before midnight. They don’t make particularly good tacos. In fact, I don’t know if we have ever ordered tacos. I remember chicken wings and french fries. I remember something fudgy, closer to a cookie than a brownie. I remember blowing the delivery guy one night, while Mariana went on a hunt for cigarettes—only one deli in a five-block radius sells any, if you can believe it—and I had to stay awake, alert, to receive our food. I invited the guy in, and he was eager, as was I. He had nice bare feet, smooth and tan except for a single strand of black hair so long that it coiled around his big toe three times. I plucked it after he came. I put it in my wallet and saved it for a night like this. 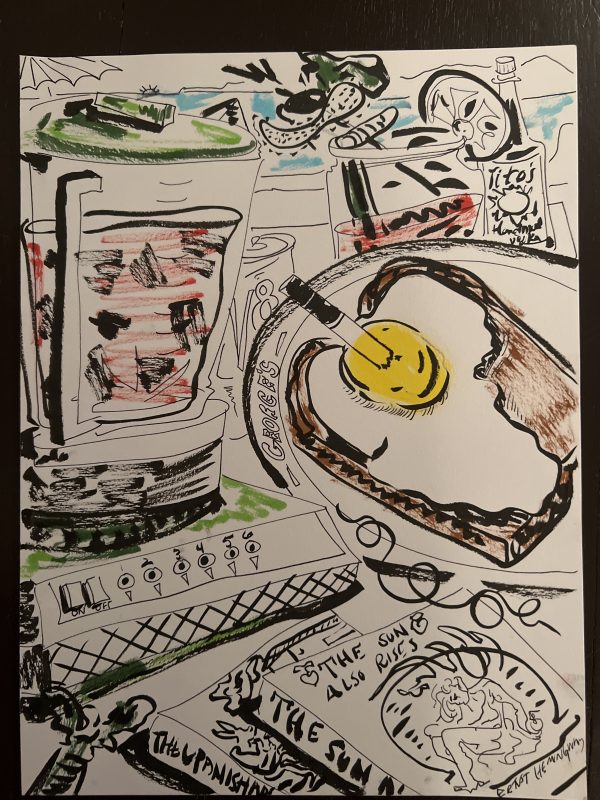 I kept a total of three hairs in my wallet: one from my guinea pig, this pudgy little thing who could barely walk from one side of her cage to the other; the delivery guy’s toe hair; and a bold, silver curl from behind my ear. I tied them into a single knot, which I lodged behind my license and an old scratch-off I never cashed in but which remained of sentimental value for the simple reason that I purchased it on my 18th birthday and thought if luck worked like interest I might one day turn my $2 winnings into $200 into $2,000, a number I did in fact hit but on the inverse as a mound of growing credit card debt I looked at each month with wide, blotchy eyes.

When I told Mariana about the knot, I described it as a symbol of life and death and sex. Also: pleasure and a slow, trilling cranial pain.

That’s fucking disgusting, she said. Then, over a week she collected four strands of hair to tie together with her own. She wouldn’t tell me where they came from or what they meant to her. It’s best not to share, she said. It’s best to let the magic work, and if it doesn’t then it’s my burden, not yours.

We discussed burning them on the gas stove, or rolling them into a cigarette to be smoked on a long walk in the sharp night of winter. We considered sprinkling the hairs into the folds of a taco and consuming them. We discussed consuming the other’s hair, thinking maybe a miracle might form by combining our powers, our frenetic desires.

Mariana claimed my hairs were bitter, pure sulfuric acid on her tongue. I tasted nothing. Hers was hidden beneath hot sauce and sour cream and loose, runny eggs. 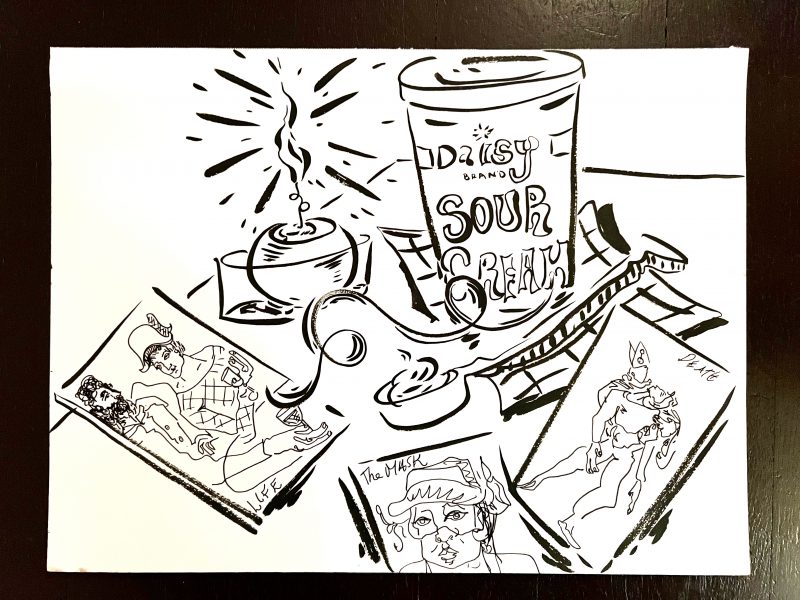 In high school, Mariana and I bonded over our mutual obsession with authority figures: our white teachers who lived in the outer suburbs of Cleveland, the ones who spent no time in the actual city, getting into their cars as soon as after-school faculty meetings were done and driving  to their homes forty-five minutes east or west. An intense devotion pulsed steadily through our veins. You feel it too? I had asked Mariana, and she said, Yes, it feels like I’m under a spell. I don’t want it to end.

Mr. Johnson taught world history. We drove to his house one night when he claimed to be on vacation and peeked into the windows. We saw him ass-naked, bent over the edge of his sofa, receiving a thunderous spanking from a stocky man wielding a paddle, wide and Twizzler red. We adored Mrs. Smith. Most afternoons, we gossiped, eager for any details about her real life: her husband, his name, where he worked, the miscarriage, the second miscarriage. Once we had enough information, we sent Mr. Smith cryptic, threatening messages alluding to his being a very bad man. Mr. Jordan had a girlfriend, a former classmate of ours, technically, though she had graduated three years before us. He cheated on her with a woman attending Cleveland State. She worked in the dying mall in Mentor, at one of the only two restaurants in the food court. I held her arms behind her back, but it was Mariana’s fist that made contact. The glasses snapped and skittered across the linoleum. They were purple, a gentle lilac as they slid beneath the mall’s fluorescent lights. 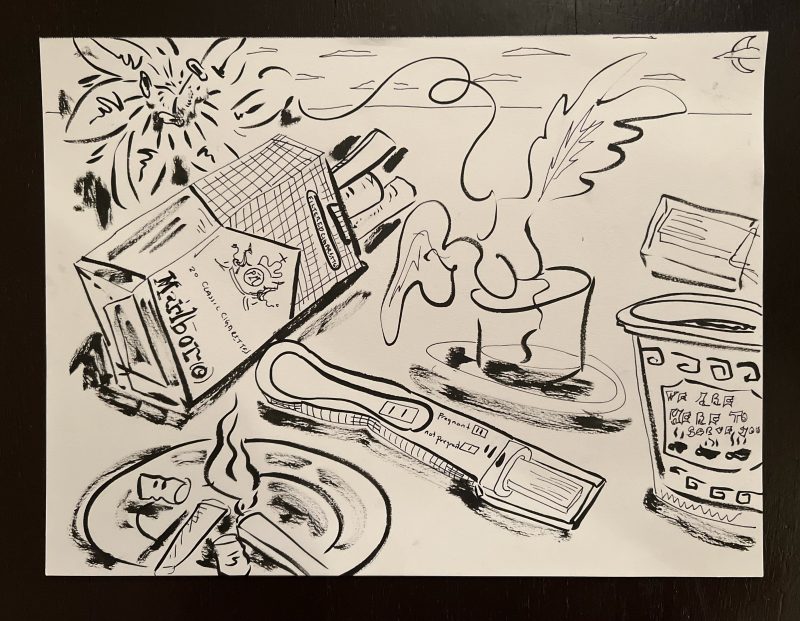 Mariana burps. There are no flaws in friendships that last decades, centuries; there are only truths we accept and the ones we endure.We’re drinking bodega coffee on her couch, watching the sun break through the morning sky. She’s on her last cigarette; I’m waiting for the change to kick in. I’ve been called passive, but sitting here, meditating, ingesting, feels like the most active choice I could possibly make.  I know Mariana doesn’t think the change will hit. She doesn’t need to say it. But she stays, smokes through her final cigarette, slurps down the hot coffee, and lets me have this, whatever it may or may not become.

I crush my empty cup and toss it out the window. Yo, someone yells, who the fuck did that? I’m gonna beat your fucking ass!

If he comes up here, Mariana says, that’s all you. She finishes her coffee, then heads to her bedroom.

I could take him. From the third floor window, the man appears short, the height of a fire hydrant.

I step outside another window, through the fire escape, and bend forward, widening my stance to puff up my chest. Tough guy shit. But it’s clear this guy isn’t a man at all. Just a boy. Maybe ten, I don’t know. A big boy, his mouth twisted into a snarl. 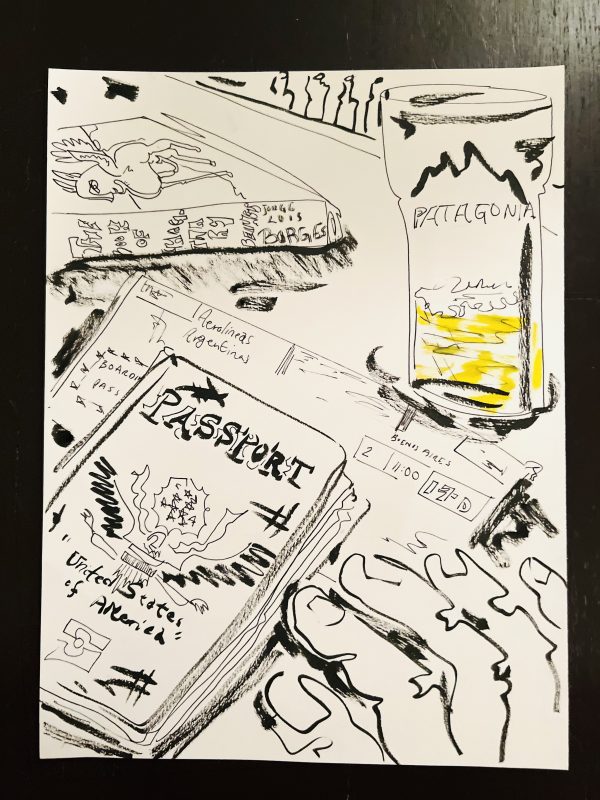 After college, Mariana and I traveled down to Argentina to spend a month putting off our respective job searches. We had matching literature degrees: mine in English, hers in Spanish. We had zero idea about the future. All of our hypotheticals hit a freeze as we approached graduation. A month with Mariana’s extended family would be the fuel we needed.

That was the theory, anyway.

What really happened is, I devoted whole days to drinking beer to the point of brownout—never blackout, because I had a modicum of restraint—and waking up in random boys’ beds, my mouth dry, lips chapped, my legs and thighs sore, the muscles overly stretched out. Time passed in a cocoon of heat and last night’s stink.

It seems like you have a death wish, she’d say.

But was she much better? It was a month of reconnecting with her roots. That’s how she’d describe it. She read through a stack of books she never got around to in undergrad, helped her cousins with their English assignments. Some nights she left shortly after midnight, returning when the sun was an angry sore. Her skin would glisten with the markings of a fresh tattoo on the thigh, a shiny piercing on her brow.

A new multi-edged hostility. A ripple in the friendship. Why stay?

One night, I met a guy who paid for everything with a credit card thick enough to spackle a wall. I slipped it out of his wallet when he went to smoke. I booked the earliest flight back to the United States I could find. 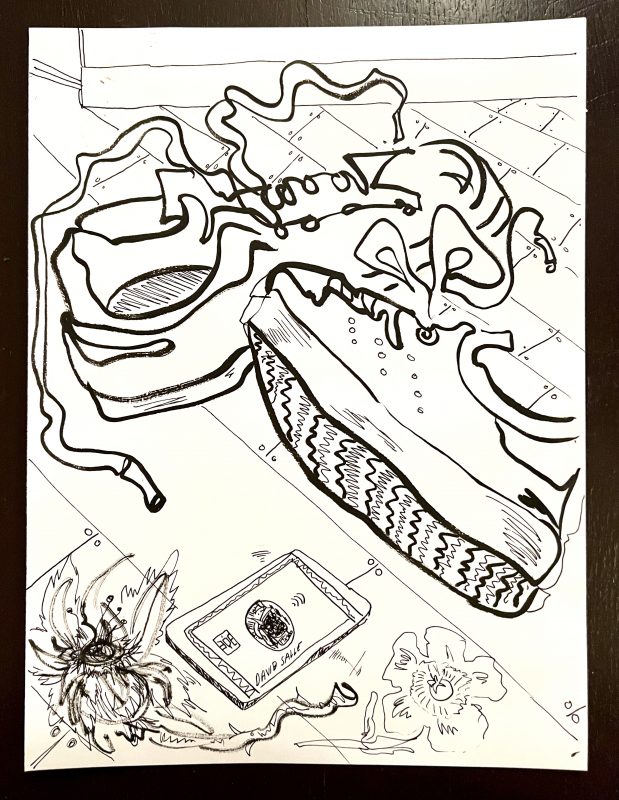 The boy kicks off one shoe clean through the window over the fire escape. He kicks off the other and it smashes Mariana’s bedroom window. Then, he runs off down the street, dodging one car, tripping into the path of another. The honking is too loud for the morning.

I’m wired. Back inside the apartment, I feel dizzy, pulled down by a hard, cold fist in my stomach.

There is glass everywhere; it shimmers in the sunlight. I’m intrigued. I step forward, allow my barefoot to hover over the glass before stepping down with all my weight until the flesh becomes nicked, bitten in a thousand tiny places. Blood stains the glass into something beautiful, like precious jewels.

What the hell are you doing? Mariana yells, sober. She’s holding one of the shoes.

She pulls her cardigan around herself, then kneels down to pick up the other shoe. Will you put these on? This isn’t like you.

The shoes are not my size. They squeeze my feet into submission, cooling my toes completely numb. It feels alien to stand in shoes that do not belong to me. The world isn’t clearer or worse, but it’s more expansive somehow. Mariana is right—this isn’t like me. Maybe I like it better. 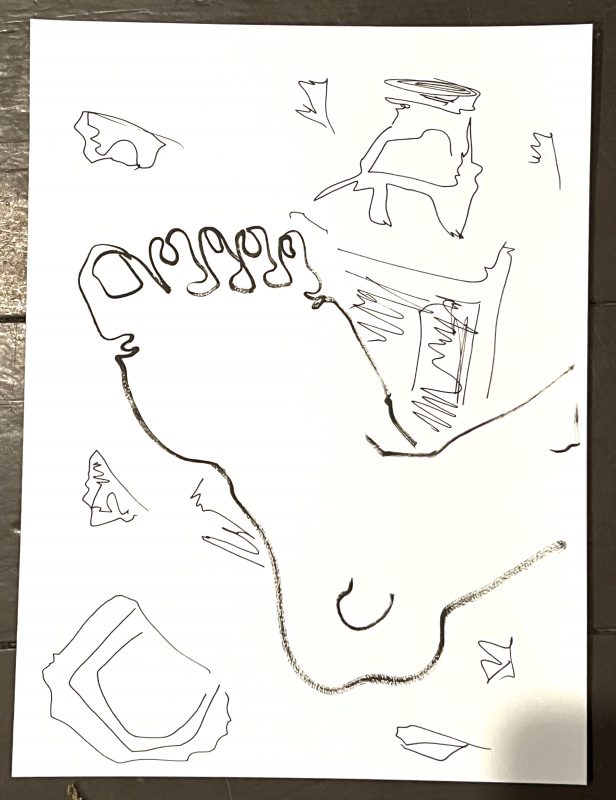 I walk twenty blocks back to my apartment, expecting to be greeted by the squeaking of my guinea pig, some indicator that not much has changed at all. I remove the shoes first thing to stretch out my toes, now crusty with red and lined in pink spider webs from the shoe’s grip. In my bedroom I find her, the guinea pig, not squeaking but panting, hiding in the corner of her cage. Her entire world has been rocked, I see. On the other side of the cage is a pile of babies, a stack of six or seven; not a single one is breathing. We hold each other’s gaze. I’m always holding. I don’t want to be the first one to break. I’ve seen the world, and felt as much emotion in my confused heart. I’ve laid it all bare. But her furry, little face, the black night in her eyes, the horror. I reach into the cage and cup her in my hands, pull her tight to my chest. Whatever happens next will only begin if I take another step.

Kate Pincus-Whitney (born 1993 in Santa Monica, California) lives and works in Los Angeles. She received her MFA in painting from the Rhode Island School of Design in 2020, and her BA, focused on psychology, cross cultural anthropology, and the creative arts, from Sarah Lawrence College in 2016. Her work has exhibited globally. She is represented by Fredericks and Freiser in New York.

Christopher Gonzalez is the author of I’m Not Hungry but I Could Eat (SFWP, 2021). A recipient of the 2021 NYFA/NYSCA Artist Fellowship in Fiction, his writing appears in Poets & Writers online, the Nation, Catapult, Best Microfictions, and Best Small Fictions, among other journals and anthologies. He currently serves as a fiction editor at Barrelhouse magazine and lives in Brooklyn, NY but mostly on Twitter @livesinpages.