In the mountains, up a road leading out of a small village, there is a training camp. Behind blue gates, cows graze and the sun lingers on tough grass. Here for a menswear editorial, the magazine team arrives at dawn to find the athlete is already there, sitting under a tree waiting. Even from a distance, as clothing racks are set up in the sparse gym, the girl is impressed by the athlete’s aura of calm determination. He emerges ten minutes later, to be photographed in a field of eucalyptus trees—dressed entirely in Gucci. Some of the other athletes at the camp are bemused by the situation, they sit on their phones glancing up from time to time. The magazine team is not, they’re busy steaming track pants and designer suits as the girl and the athlete’s agent look on.

She watches the steam float out into the hot air, overwhelmed by contradictory thoughts, her dichotomy making her cringe. She presents as artistic though she’s unsure of what exactly motivates her to be an “artist” – reminding herself that she wants her work to deal with depth/truth. She’s openly critical of consumerism and a profit-driven economy, believing it damages society. Although if seriously challenged, the girl wonders if she would hold strong to her confused set of values. Reluctant to admit her need for recognition, she’s incapable of instilling her faintly anti-authoritarian stance against injustice into action. 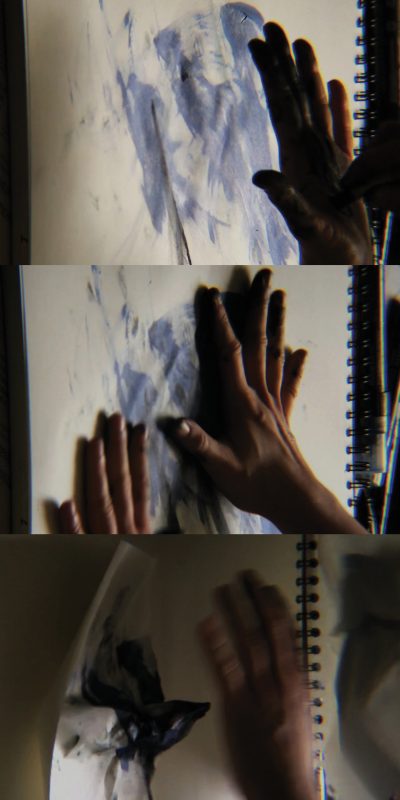 In 2019, the athlete ran a marathon in less than two hours, something which was previously deemed impossible. Now the world record holder, the athlete is a multimillionaire. Despite this, he lives in a modest house and runs a small farm.

Slipping and sliding in his loafers, the stylist leaves black marks all over the gym’s white tiles and debates loudly whether the sportswear pieces work with a traditional Indian wedding suit. Eventually he pairs the suit with some massive sneakers- contrasting with the athlete’s slightness, they’re so big that they distract. The shoes were designed for the athlete by his sponsors, and allow him to save crucial seconds, (they’re available everywhere and you can buy them for 300 dollars).

That night, she pulls up an old photograph taken in her grandmothers’ apartment. The girl notices the ostrich egg in the far-right corner of the picture. It sat in her grandmother’s bedroom and she hasn’t seen it since her death. A bourgeois ornament, the egg is symbolic of the girl’s class which she simultaneously regards and rejects. Remembering the egg again kind off excites her, the object is so weird. As a teen she felt like the egg was alive, the receptacle of something alien. Because of its stillness, she believed it was all-knowing. This feeling became an ideal for her own work (tortured pictures that didn’t make sense even to her). Although today, the girl is less inclined to disturb. 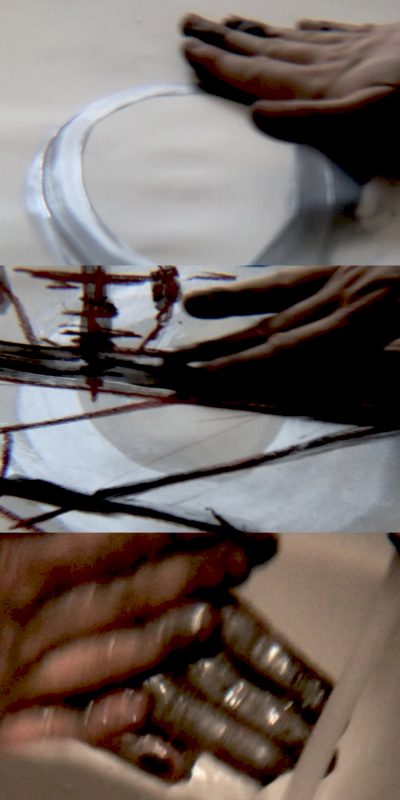 Last year a petrochemical company sponsored what they called the 1.59 challenge. It was set up especially so that the athlete may achieve his goal of completing a marathon in under two hours. Running in the sneakers named after air and insects, he ran the distance of 42.195 kilometers in 1 hour 59 minutes and 40 seconds. The 1:59 challenge was broadcast all over the world, everybody seeing the athlete’s legs put the chunky shoes into motion.

After the shoot, when the girl returned to France, she decided to look for the ostrich egg, probably in the family house somewhere, maybe still in the boxes filled with her grandmothers’ stuff. While she searched, the girl promised herself that if she found the egg she would take care of it the way people did of old objects. Things she believed, symbolic of a time when people valued what they owned.

On the challenge’s sponsored website, the athlete is quoted saying: “You run, eat, sleep, walk around – that’s how life is. You don’t get complicated. The moment you get complicated it distracts your mind.” He believes in the simplicity of running, encouraging people to live uncomplicated, healthy lives. The athlete’s beliefs are confusing to her, now that his image is used as the motivation behind the acquiring and producing of stuff. 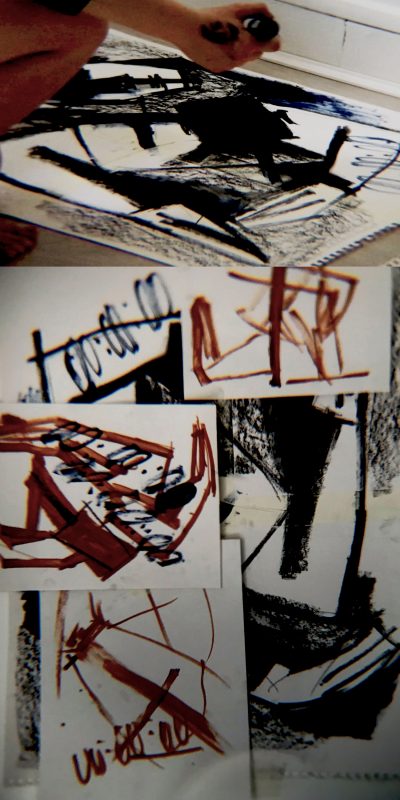 In the dark bedroom of her family home, surrounded by open boxes, the egg is lost. She can’t find it anywhere. The girl goes to bed, wakes up and at midnight purchases shoes online. For a second, she thinks of buying a new egg, imagining its immaculate shell devoid of her grandmother’s ghost. The girl doesn’t really understand why she dislikes superficiality. In reality, her life represents it, and her livelihood mostly depends on it.

The athlete loves to run, the girl imagines he is fulfilled only when he can perform at the highest level. That said, his pursuit could be perceived as useless, like landing on the moon. She watches the athletes interviews, watches as he is pressed to reveal what motivates him. She wonders why people feel the need for the athlete to justify his motive. At the finish line, the athlete says: “I am feeling good. […] I want to inspire many people to believe that no human is limited.”

The petrochemical company that sponsored the athlete’s record-breaking run is a privately-owned collection of refineries, offshore gas fields, and chemical works, and started sponsoring sport teams in 2008. It invested 19 million dollars into the athlete’s second attempt to run a marathon in under two hours. The girl suspects the 1:59 challenge was built up by the chemical company sponsoring it. Banging out the challenge’s historical status like a slogan, they muffled the fact that the race included seven rotating pacemakers, delivery of hydration, and a track that had been modified by scientists to work in the athlete’s favor. Owned by Britain’s richest man, the petrochemical company is one of the biggest virgin plastic producers in the world. Relying on fracking, the company is the main producer of carbon fiber, a natural product very difficult to recycle – which makes up part of the athlete’s sneakers, saving him those few milliseconds. 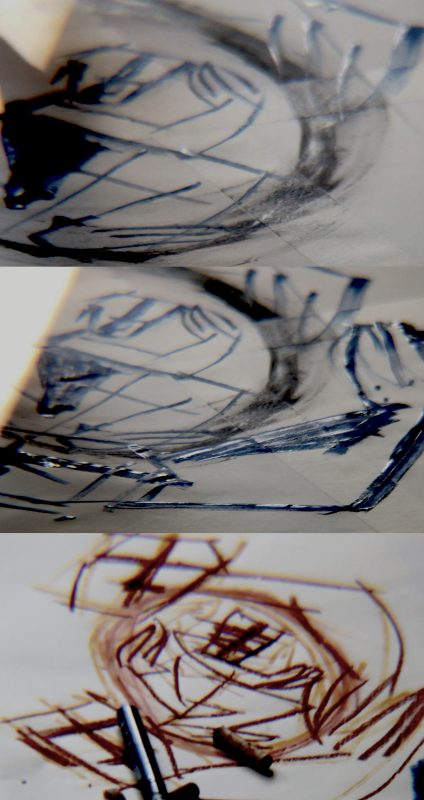 When the athlete set the world record, he redefined possibility. Fiercely demanding, he can only push his limits if running at the highest level. The girl understands how pushing yourself to a point where you redefine boundaries can become a reason to live, can be truly addictive. The girl believes this is his driving force, to the extent that the athlete does not care, or turn his attention to the sportswear brand, the chemical company, and to what exactly it is that they do.

After the shoot, at dinner, she asks his Dutch agent if some athletes refuse the agency’s propositions. The agency is based in the Netherlands and provides a sports marketing vision. He says that sometimes athletes do, because of “their culture or something.” She believes the agency’s marketing strategy has a lot to do with accentuating the athlete’s inspirational capacity. The girl thinks the athlete’s inspiring talent and success is important, because it is mysterious. Explaining it seems pointless yet it is articulated, and as a cringy hashtag (no human is limited) which appears all over his branded clothing, transforming the athlete’s feat into a marketing tool. 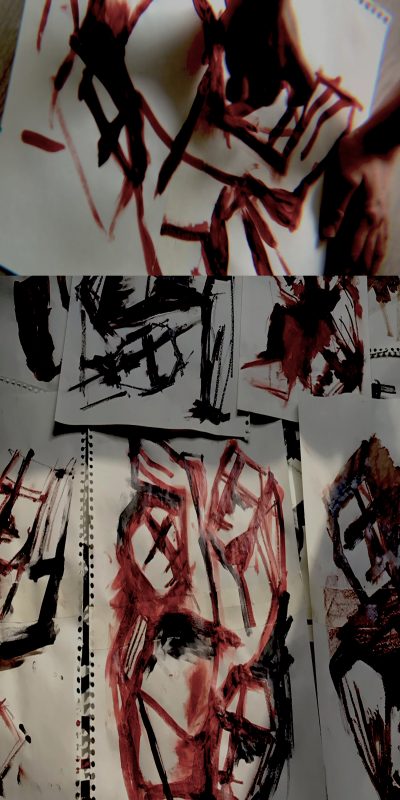 Once its biological purpose served, the ostrich egg was transformed, mounted into an object of value, existing only to be treasured. The girl discovers that ostrich eggs were status symbols for aristocrats from ancient civilizations such as Etruria. The eggs had to be stolen, the thief running the risk of being killed by the ostrich. Once caught, the yolk was blown out through a tiny hole, stored until dry, then carved. After completion, it was transported across the sea or along trading roots that crossed multiple borders. The ridiculous image of a large egg sailing across the ocean was to her a reminder that in situations of gain, humans will usually think without end, limit or boundary.

Instead of the egg the girl finds a photograph of her grandmother holding it. She’s thrilled by the contrast between the egg’s extreme size and the ageing creases of her grandmother’s paper-thin frame. The girl realizes that some objects have meaning when they are held. She ends up wishing everything in her life could be so meaningful. Instead, she compensates with a crafted image, carefully exhibiting her discrepancies online. The image she projects is a kind of betrayal. What she wants is to be authentic, to have nothing to prove, to create outright meaning. She naively desires purity but is constantly frustrated by her own contradictions. 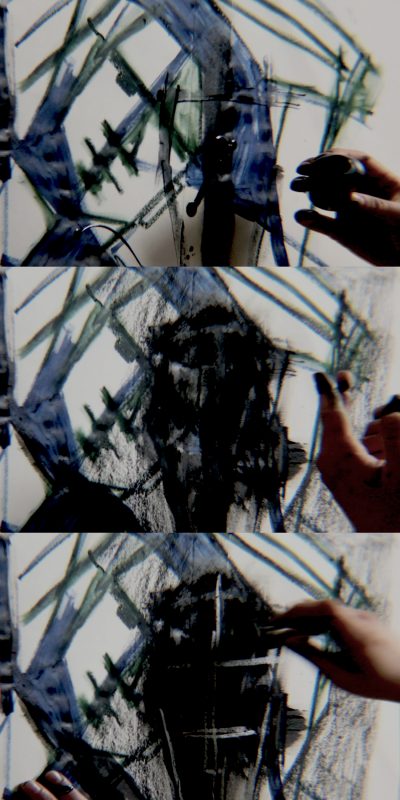 Long after her time with the athlete, the girl received a gift from a friend. It was wrapped and she opened it a day after it was given. The gift turned out to be shoes from the sportswear band. She hardly hesitated before putting them on, ignored her misgivings – they were so beautiful. Turns out she’s not a radical, although she expects other people to be. She rationalizes, trying to reduce the extent of her dissonance. She’ll attend parties hosted by fashion brands while feeling attached to an anarchist slogan. It’s inconsistency that makes her feel relevant and believe she’s free. The girl walks, watching the sneakers’ elaborate, specific design. 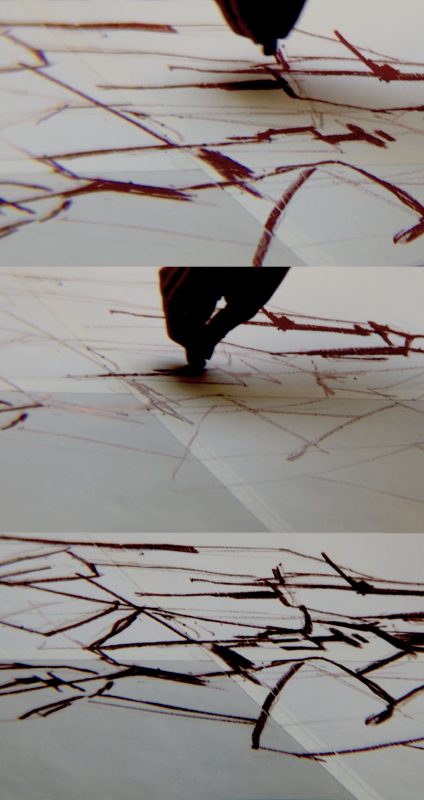 Lucile Brizard is a Paris-based multimedia artist working in photography, video, performance, and writing. After receiving her Masters Degree in Directing from Central Saint Martins, her first short film ‘Young Father’ was produced by the magazine Dazed and Confused. Her recent photography draws on her experience as an actress and photographer and uses her body as a material to explore contemporary societal belief systems.

Julia Hofer-Maire is a French-Hungarian visual artist. After studying fashion design in London, she now lives and works in Paris. Her curiosity lies in the endless faculty of ‘shaping’ different ‘things’ made from different ‘matters’ — exhausting a subject or a medium, until they become absurd. Her work is characterised by overlapping layers of techniques, tools, and materials.