In what ways was I confronted?

In the shop, magic spectacles hung from the ceiling by the hundreds. Suspended by different colored ribbons, they revolved gently whenever I ran between the door and cash register. For years I had been coming here to meet my friend Olli and see what we might encounter.

I was at an uncertain age, fluidly slipping between childhood and adulthood. My family had died years ago and left me alone with Olli, another young genderless orphan like me. In Olli’s neighborhood, we made friends with the oculist whose job it was to take the small gold grease pot and oil the joints of the magic eyeglasses every day. After hours, he would close the shop and let us try on whichever pairs we liked. Olli herself was almost unspeakably beautiful and liked to try on spectacles that brought a compelling ugliness to her face.

In the blue-rimmed ones, light began to adopt the properties of smoke.

In the tiny brass ones, fish burst from the walls and countertops.

Whenever I was feeling uncertain about myself, I put on the three delicate celluloid lenses that allowed me to see myself in well defined points. They shaped my image like metal lathes, refining and sharpening its qualities.

Olli laughed. On her face was the pair of spectacles that streamed hundreds of tiny yellow threads. In them I was something smaller than an elephant and larger than an oilcan.

Smile big, she said. The spectacles danced on her face. I smiled and smiled. All our youngness bellowed inside me. 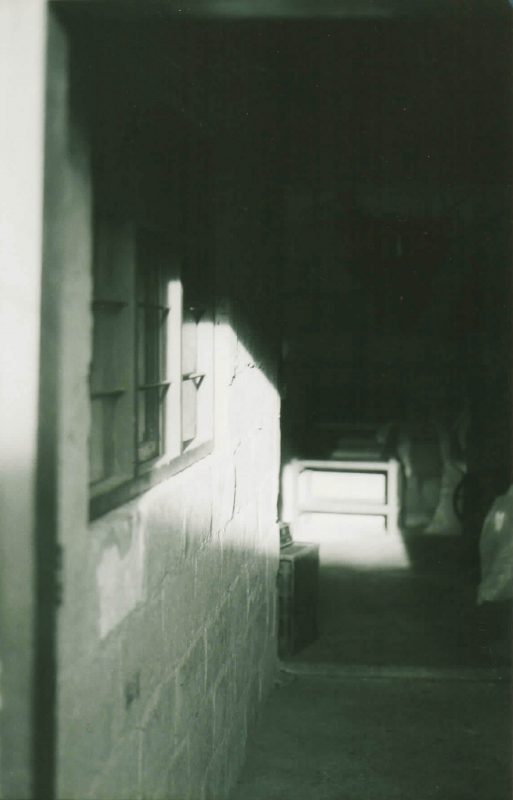 How did our first fight proceed?

At the Experimental School, it was Self Actualization week. We were supposed to devote ourselves to the practice of becoming, but I didn’t even know what I was supposed to be. When I asked Olli how to become, she would just dart off giggling between the rows of spectacles.

Don’t you care? I called after her. Don’t you want me to know?

That was the thing I hated about Olli: she was always running away from me. I felt frustrated, restless in my own skin. I had to get away. I had to find something different.

Now I crept into the shop and, while Olli’s back was turned, took down the pair of adventure spectacles. I took two extra pairs to barter with me: the fish ones and a glittering pair made of crumpled opera tickets and bubblegum foil.

It was windy outside. I left the part of the city I knew, hitching rides on carts, walking when I had to. The houses were small and cheaply painted. Small rodents whipped their bodies across the rooftops.

Before long, I’d encountered a hallway marked with certain important signs: a bull skull, a curtained door, a box of shadows. I didn’t know if I was the kind of person who walked through strange doorways, but I wanted to be, and so I was.

Inside, there were strange people practicing divine transliterations and sacrificing enormous racks of honeycombs. There were bells that, when struck, caused a deep blue liquid to pool at the corners of acolytes’ mouths. There was a smoky haze that sat in people’s brains making the rain a little gentler.

What’s going on? I asked someone. What’s everyone doing?

But the person couldn’t or wouldn’t understand me and hurried away.

I watched the worshipers make offerings of half-cent coins. The extra pairs of spectacles poked me through my pocket. I felt stupid and out of place, but I couldn’t go back to Olli. I had to keep going. 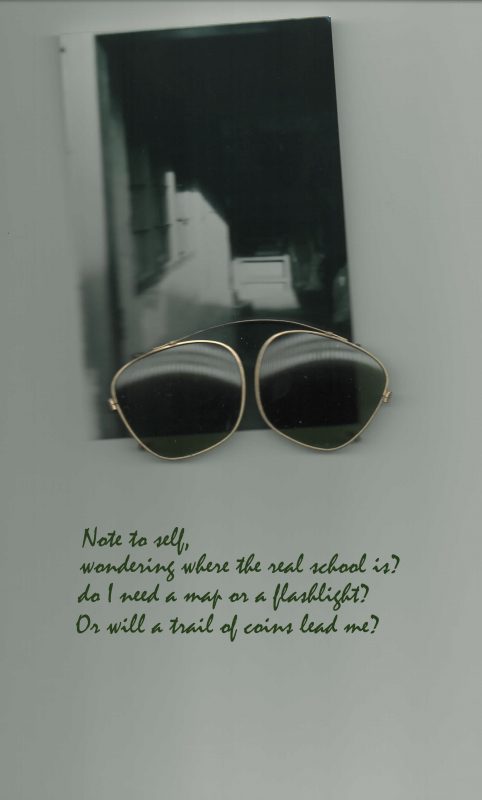 What questions did they ask?

Through a series of hand symbols I made my mission known. I was led past the worshipers to rooms where an ancient woman read people’s pasts and futures in complex patterns of sunlight and bone palpitations. She enlisted ghost mirrors; she tore apart dead flowers; she slaughtered crows to consult their innards.

By ignorance of yourself.

What is the nature of my ignorance?

How do I cure myself of it?

But the seer was already holding out her hand for payment. I gave her the two extra pairs of spectacles and she put them in a pouch in her stomach, but she continued to hold out her hand. I gave her my bag of medicine, my tinctures the color of spirit gum, my small variety of wigs. Her hand remained open, her eyes sliding up to my adventure spectacles.

I shook my head. We would have to settle the payment with work.

For the rest of the day, I stood beside the seer’s curtain and hid while people asked her advice. These strangers seemed disinterested in knowing themselves. They seemed ignorant of the processes of Self Actualization. Their questions were small and round and oily.

Where did my grandparents hide their money?

When will I be taller?

Will my wife be faithful?

In between supplicants, I had to wash away the stains left by their questions. I swept away the psychic dust and the dirty cobwebs their uncertainty left. The old seer watched me impassively.

In my dreams, I was riding in a slaughterhouse elevator with carcasses and buttons that lit up yellow. In my dreams, all my soft parts were melted away.

When I woke, Olli was getting farther and farther away. 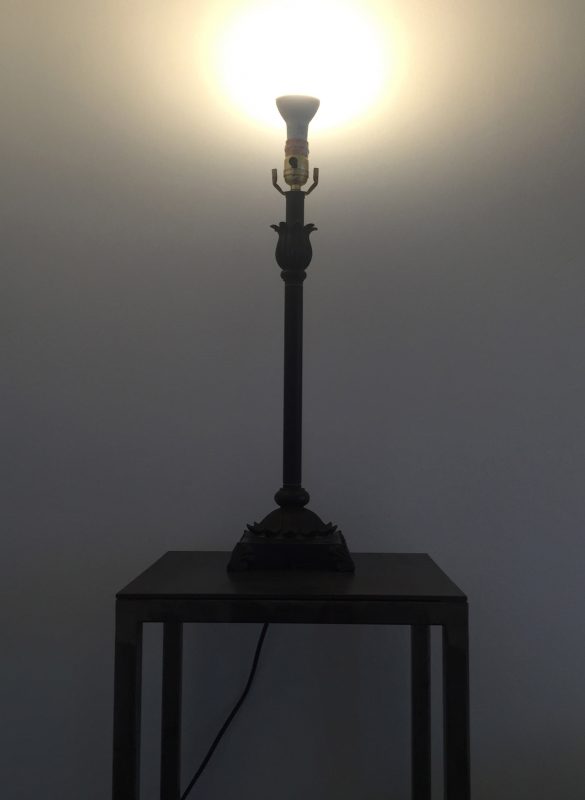 What were we even fighting about?

I need to leave, I told the old seer. I need to find my friend.

I’d realized it suddenly, on the other side of a curtain from a supplicant.

Why, despite everything I know, can’t I stop thinking about this person? he’d said. Why are they the thing I revolve around?

Is this person beautiful? the seer asked. Do they live close to you? Are they there in the morning when you wake up? Are they at your side in the evenings while you eat?

A chill had gusted across my shoulders.

Olli is through there, the seer said now, gesturing toward the next door. But you have to find them yourself.

It was another long hallway. I passed by doors leading out to courtyards with gardens full of silver rain. I passed by doors behind which worshippers still threw coins and spoke the names of their thunderous gods. None of them held Olli.

I stopped in a bare room with a single light glowing at its center. I could feel the weight of the breaths accreted in this room. I could sense its white thoughts, its fish logic, its lungs, and its nerves jangling with whiteness.

What do you think? Olli said. She was seated within the center of the light. A faint vibration came from her core.

I don’t have any answers yet, I told the room.

I don’t know much of anything, I told Olli. 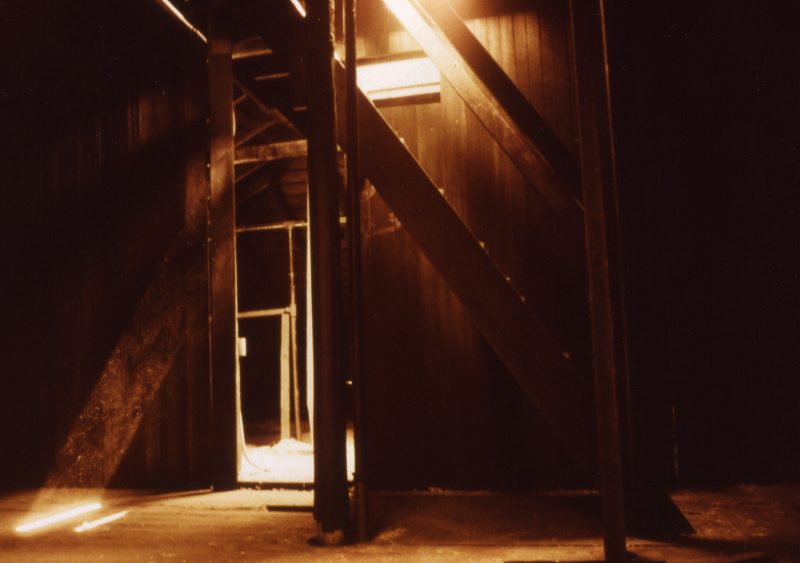 What would be our complications?

On our first day, the bare room with the light had remained empty except for the two of us. But over time, the vibrations materialized into objects. Bed, table, sink. We peopled the space with slicks of brown oil, with ropes of light, with sawdust curls and art projects. Or else we went out exploring, brought back bits of dark things to put on the shelves that materialized for us.

We are adventurers, Olli said. We are pioneers.

And it was true. We were happy. We reflected each others angles’ and jagged edges. We slid each other open like bells or flowers, and we smoothed out the roughness inside. Instead of who am I, I asked who are we? Instead of asking questions, I chased Olli around laughing.

She was always forgetting to stand still. I was always half a step behind.

This time, I lunged for her. I was finally going to catch her.

She turned, giggling hysterically, and her dancing elbow hit the side of my face. The adventure spectacles — dark-lensed, framed in delicate yellow bone — fell to the floor. 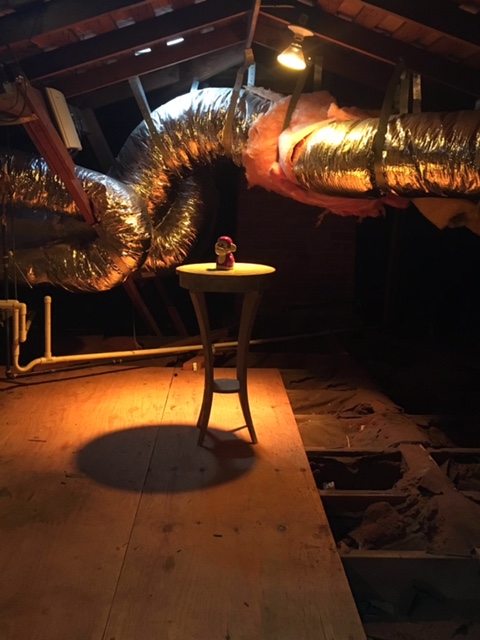 How did a person ever choose?

I picked up the adventure spectacles. I was in a bare room with hundreds of tiny hooks hanging empty from the ceiling. It was the old spectacle shop, but the man and all his magic glasses were gone. There were no vibrating lights. There were no old seers.

I slipped the glasses back on. There was Olli, standing on the deck of a sailing ship, her eyes narrow and dancing in the cold spray. I was standing beside her, my hands squeezed tight in red mittens.

Glasses off: The bare room. The forlorn click of a machine turning on in another part of the building.

Glasses on: Olli climbing the side of a building, a harness making architectural shapes on her shoulder blades. Olli as jewel thief. Olli as explorer.

I blinked. My eyes were swimming in and out of focus. I was remembering what Olli once told me in a dream.

Our job was never to abide by reality, she told me.

Our job, she said, was to destruct the real. 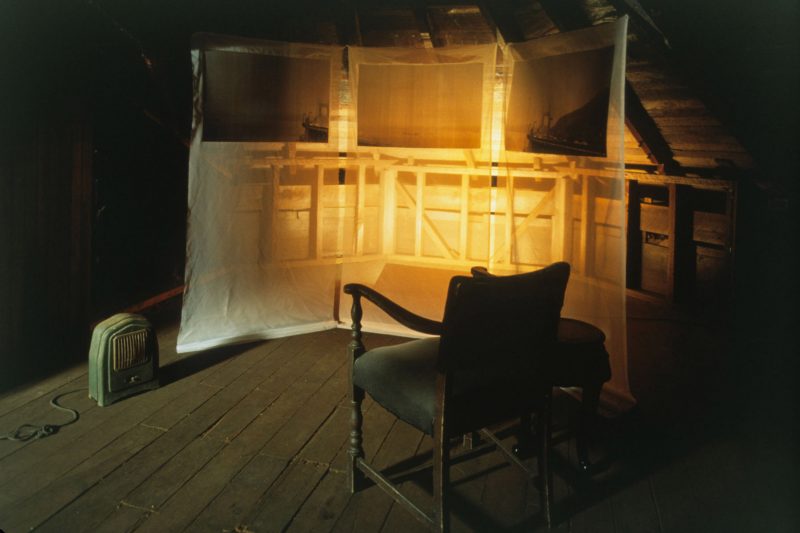 What lights burn in your house? What glasses are you wearing?

What if you spend your whole life uncovering your own mechanisms? What if they’re grotesque and unlovable when you finally do?

Which is not to say there is nothing.

The sun on the water. The giggling down the hall. All the unseen things in the corner of the room.

What do you see?

What hasn’t yet become visible?

Melinda Smith Altshuler, a Los Angeles native, works and lives in her hometown. She studied fine arts and anthropology at UCLA and CSUN and has exhibited nationally and internationally. Altshuler’s studio practice addresses conditions of translucency such as light, fog, clouds and water through sculpture and photography projects, often incorporating found objects as a caret to the past. Melinda Smith Altshuler sees light and shadow as a way of defining space.

Gabrielle Hovendon’s writing has appeared or is forthcoming in The Missouri Review, Gettysburg Review, Cincinnati Review, Southwest Review, Redivider, VERSE, and Ninth Letter. She lives and teaches in Athens, Georgia.