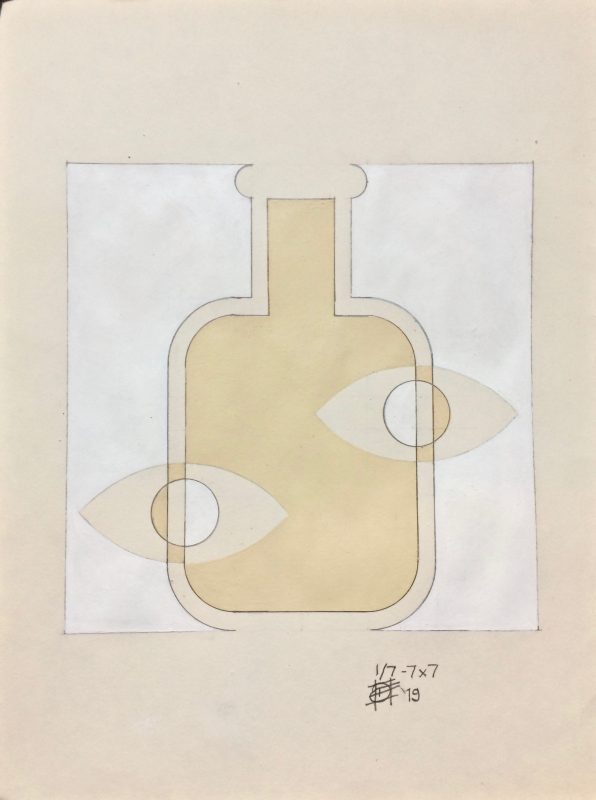 He came in wearing a pork pie hat, the ripped top painted like a ladybug. Melted-looking rubber nose, greasepaint five-o-clock shadow. He carried a blanket tied to a stick.

I pushed my empty aside and the bartender brought another. The clown sat next to me and pretended to fish for my beer, casting and reeling until the bartender slid him one.

He downed half of it. Then he frowned, moved his fist under his eye, poked out his bottom lip. One eye seemed to hang lower, like that side of his face was older than the other.

Sheila and Abigail were waiting at home for me. In counseling, I’d recently discovered I’d been squashing down my feelings. I wasn’t sure which ones to hold and which to let go. Sometimes tending to the bad ones felt like swinging at ghosts in the dark. I was making progress, sure, but a hole had opened in me. What do you put in that hole?

The clown’s pants were made of patches. He slipped a tiny pair exactly like them on his fingers and walked them across the bar. He stood and pointed to me, then his plaid tie, then the door.

The clown started turning his pocket inside-out. The inside went on forever, piling at his feet.

He restuffed his pocket, picked up his blanket-on-a-stick. When he got to the door he turned around and cast his imaginary fishing line, his low eye wider as he tried to reel me in. 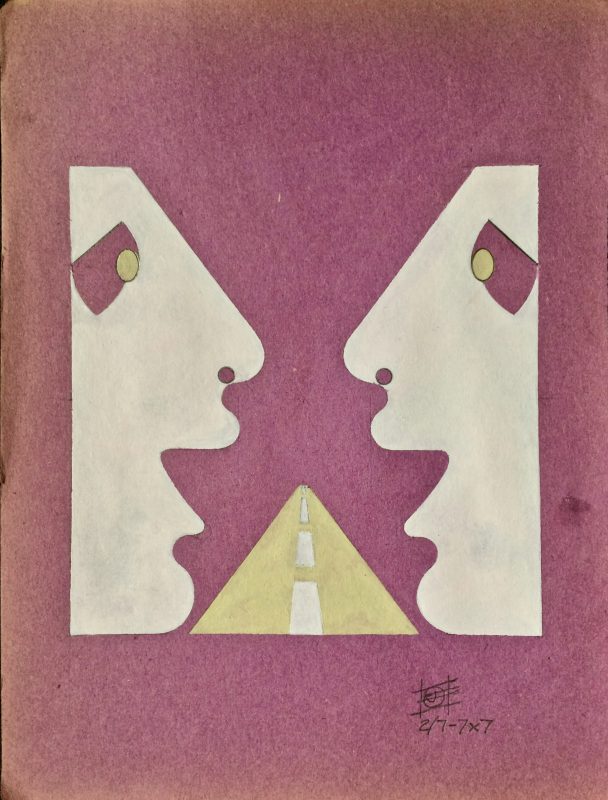 A river of taillights shined ahead. Traffic backed up for a few exits and came to a standstill. What got me through the commute and the paralegals scrambling to hold the door, the pitiful glances in the elevator, was Sheila and Abigail. Sheila was making chicken piccata and salad. Bottle of pinot noir on the table. She showed love through food and fussing over Abby and me. I propped my phone against the wheel to watch Abby bang tiny fists on the yellow high chair, her mouth grape-juice purple.

When the video cut off, I noticed the siren in the distance, the honking, the flashing red lights in the rearview, the headlights of cars behind me clearing a path, a chaos of parting metal as the firetruck closed in.

The hole inside yawned wide.

I pulled to the shoulder, my heart vaulting into my throat as the red monster roared through, siren pitch-shifting and fading away, and I cried. The house would be dark again, the fridge stuffed with takeout bags. I knew what twenty tons of firetruck had done to flesh and why families shouldn’t have open coffins.

I used to wonder how humans could hold truth and fabrication in the mind simultaneously, even switching between the two, believing what someone else would never stomach. I didn’t wonder anymore. I could taste the dill on the chicken, the salad’s vinaigrette. Smoky wine the color of roses.

Down the interstate, I passed a man in the shadows. His silhouette in my mirrors, I could almost make out a stick slanting over his shoulder, a teardrop-shaped bundle at the end.

The firm said I needed time off. A leave of absence with pay.

My first Monday home, I researched what the clown had been carrying. Something called a bindle.

That afternoon, I drove to fire station no. 3 looking for Flubber. Like some cruel joke, the man who had demolished my family was named Fred Flubber. I’d seen his picture in the paper. I’d driven to the station before, but this time I got out. Within a few minutes, he appeared from the garage wearing yellow coveralls and a black shirt, waving like he’d been waiting for me. He had the build of a fireman, the face of an accountant.

“Mr. Pendleton,” he said. “I wrote that apology letter but haven’t spoken to you in person.” He shook his head. “I’m so sorry, Mr. Pendleton, it’s just the worst thing.”

I kept my fists clenched at chest level as this man, a foot taller than me, broke down.

Flubber went on living in the world he’d rid of Sheila and Abby. Due to incompetence. Due to plowing through an intersection to get to a fire in an abandoned building. Due to Sheila not seeing or hearing him coming. Due to so many coincidences that the mind couldn’t parse them and pain had no beginning or end.

He knelt on the asphalt. “Let me take off my glasses before you hit me.” He removed them one ear at a time. In his clear, moist eyes I saw a grown child, someone else to pity.

There were window boxes behind him the firemen had built. Flowers blooming. Two butterflies flitted on the marigolds.

In dreams, I’d feel Sheila’s dry palm in mine and we’d go to the supermarket, Abby’s legs dangling from the cart, her saying butterfly and Daddy silly, the sweetest sounds ever heard, waxed aisles stretching ahead luxuriously as we dropped dream items in the basket.

I began daydreaming about them, whole afternoons spent staring at vines choking the azaleas in Sheila’s flowerbed, imagining the places we could’ve gone together. Abby walking on wet sand toward the ocean for the first time, screeching at the waves creeping over her toes while Sheila swam beyond the breakers, the low sun dimmed and perched on twilight waves.

One afternoon out on the patio, Sheila slid open the backdoor and smiled.

I went in, the house smelling of baked salmon, cauliflower, potatoes. Abby happy in the high chair. I scooped the unopened mail and two-dozen sympathy cards from the table, tossed them on the couch.

Sheila said grace. I couldn’t bow my head or close my eyes as she listed things she was thankful for. This food, our health, our family. Dear heavenly father in your name.

I held Sheila in my arms that night and told her how I’d changed, how I considered every day with them the greatest gift. We could live in Japan. Abby would become bilingual, and when we came back, she’d be the smartest kid in school. I told Sheila we’d make her dreams happen, sell the house and buy one in her hometown so Abby could know her grandparents.

I was listening. I might’ve been hearing her for the first time in my life, but I promised I’d never stop listening. 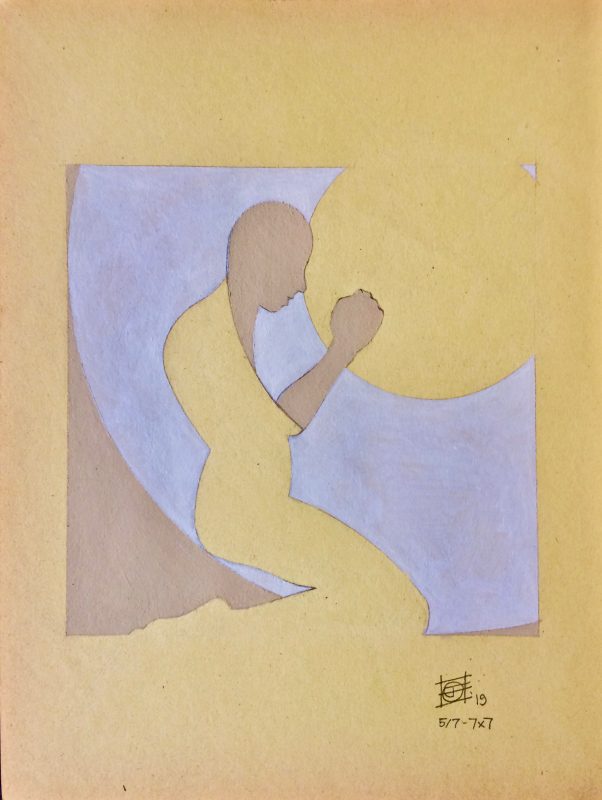 She wouldn’t stay, not even in my dreams, and I flipped to the inverse of myself, the shadow of love. I became the hole, the absence of light, the sucking at the center of galaxies. A place only death lives.

I stopped leaving the house and forwarded my calls to voicemail until the box filled. When deliveries came, I’d crack the door and take the boxes of groceries, quarts of wonton soup, pizzas, and stapled wax-paper pharmacy bags. I studied interesting facts on the internet:

-Idling vehicles in closed garages for extended periods of time can result in carbon monoxide poisoning.

-The state of Georgia requires no waiting period between the retail purchase and delivery of handguns.

I was still in pajamas, expecting a shipment of disposable plates and cutlery, when the knock came. I opened the door and a floppy black shoe landed on the threshold. Then came a rubber chicken’s head, wobbling crazily, and the tattered valise closed on its neck. An airhorn blasted in my face and I fell against the wall as the clown bounded into the room.

He dropped the case and bindle and frowned, twisting his fists under his eyes, poking his bottom lip out at me.

He shrugged and extended his card. He picked up his belongings and kicked a trail through the trash to the extra bedroom. 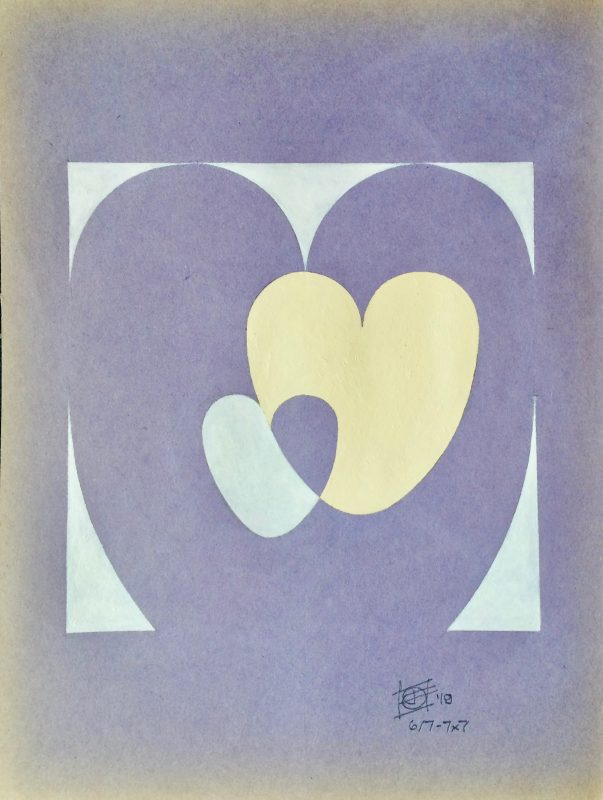 Next morning, I was eating cereal on the patio when he came out in full makeup, offered me a flower, squirted water up my nose. I slapped him, he slapped back, I slapped, he slapped. Enraged, I picked up a chair and fell backward into the flowerbed. He went to his knees, his white mouth hanging open as his head bobbed in silent laughter.

The night the fire alarm sounded, I opened my bedroom door, setting off a Rube Goldberg contraption that burst a water balloon on my head.

He kept heating cans of beans on my hotplate. His flatulence smelled like burning tires.

After days of takeout and beans, three boxes arrived. I scowled at him—he’d made purchases with my laptop. He pulled out a new velour jacket which he kicked around in the backyard. One box contained greasepaint, fake teeth, whoopie cushions. The last one held a black suit, black bowler, patent leather shoes.

The coat fit. The pants’ hem swallowed the shoes. When I put on the hat he jerked me out the backdoor and shoved me down in the yard, kicking dirt on my clothes. He dusted his hands and bowed.

He stuffed cards in my pocket and I pulled one out. LAST YEAR’S MAN it read.

“What kind of name is that?”

The last morning, Periwinkle put on his pork pie hat. He pulled out a pocket watch with an enormous face, its hands spinning. His jaw dropped in feigned surprise. Frantically, he finger-walked the tiny pants across the table.

He pretended to steer an enormous wheel. He squat-walked around the kitchen, pumping his arms and blowing a wooden whistle.

I smeared on white greasepaint, used Sheila’s makeup to pencil a thin mustache. I drew a tear, a fat comma, under each eye. With hat, coat, etc., I looked convincing.

We were far out of the city before he signaled to stop. He collected his bindle and valise from the trunk and waved for me to follow.

Railroad tracks on the other side of the tree-line. A long horn blew in the distance. The train crept around the bend spewing thick smoke, pulling graffiti-free cars, my legs shaking as it neared.

He saluted and turned, moving well in floppy shoes, running alongside an open car. He tossed in his belongings, caught the siderail and hoisted himself up. He peeked out and cast his imaginary line at me, started reeling.

I’d been pretending there was something in the house to return to. I thought about what leaving meant and realized I worried too much about what things meant. Meaning had left me this: a train gaining speed.

I started running alongside the caboose. I grabbed with both arms and lifted myself to the platform, heart chugging in my chest, the rails ringing beneath me.

Artist Daniel Fyffe was born in 1961 in Denver, Colorado, and raised in Sweden. After living for a number of years in Los Angeles, Fyffe returned to Sweden in 2012. In 2014, Fyffe founded a group for international artists in the Stockholm area called Fit Out. He has shown his work extensively in Sweden, Finland, Los Angeles, and elsewhere.