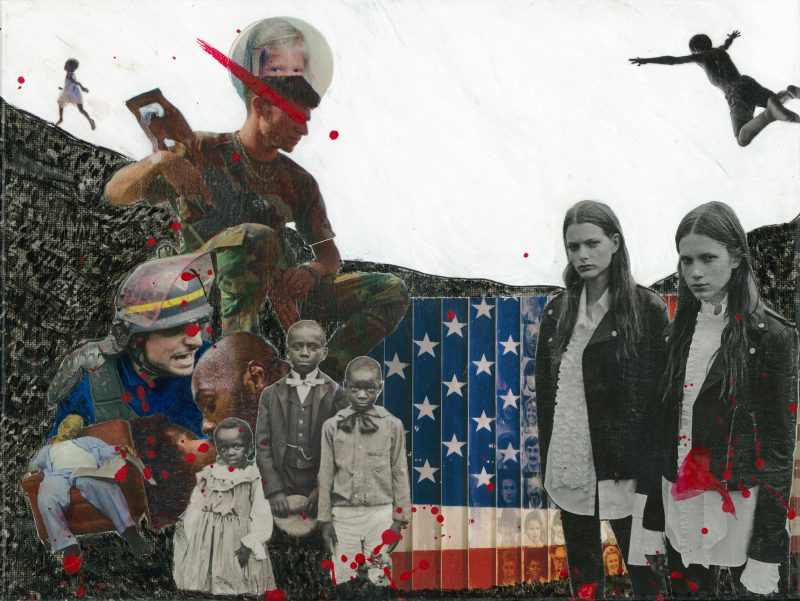 We had been called many things but never this.

It was absurd. My sister and I abhorred labels and spent our lives perverting them. We bended gender, crossed class, kept our sexuality inviscid. We told people we weren’t sisters but lovers. Between the two of us we routinely swapped drugs, men, political affiliations and personality disorders. I still get confused whether it’s Nina or I with the nut allergy. We are nothing if not eager saboteurs of social constructs. Upon being offered seven figure modeling contracts as children, we split a bottle of absinthe, pulled our t-shirts taunt over our faces and cut away each other’s hair with rusty scissors (it became the look of the season). Between us we’ve lived 52 years in 30 cities speaking 12 different language and having 306 lovers. We have, in a word, lived. And now we’re a little tired and ready to take root. Of course we’re not exactly suburban types. Instead we threw a syringe at a gas station map and discovered a ramshackle Victorian in a battle-torn little slice of Americana with just enough overgrown vacant lots and howling dog packs to give two cosmo bon vivants a taste of the country.

The realtor warned us. Slipping in among the talk of original crown moldings and walking scores, he mumbled references to lost children, pill mills and centuries of hyper-violence and race wars that ran through the town like toxic tap water. In response Nina had pulled up her Black Lives Matter halter top to reveal a Black Lives Matter tattoo to assure him we were anything but dilettantes.

So imagine our surprise that first morning, emerging on our rickety porch to find the word GENTRIFIERS spray-painted across the dead lawn like an unwelcome matt. 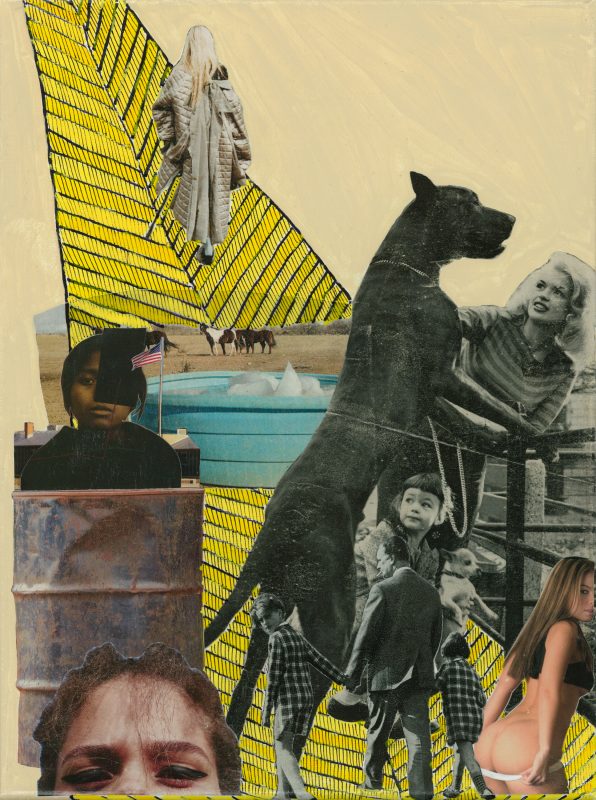 We took to calling them The Girls – a label too innocuous for the havoc they wreaked on us. It wasn’t like we didn’t already have our share of headaches. Clusterfucked infrastructure, tainted blood on the playgrounds, a police force militarized to the teeth, sewer rats large as linebackers. Don’t get me started.

And yet even among our daily grind of corruption and recreational arson, our new neighbors still managed to tweak us.

A constant convoy from the city of sports cars, backhoes and big rigs swarmed to and from their place. They cut ribbons and broke ground on every nook and cranny of the property then threw parties that lasted for days – the Old Victorian’s broken glass rattling like teeth to whatever sonic weaponry they were blasting. They sat on the porch at all hours, high on something with an enormous dog at their feet, waving genteelly and drinking lemonade as if mocking everything our neighborhood had lost. No one dared use their porch in our town for decades. They closed down our much beloved methadone clinic and in its place opened an izakaya. There was no question they had the money to buy and sell us off for scrap. It was rumored their father made a fortune with a chemical agent utilized in the Middle East the effects of which made  Agent Orange look like Tang.

When we began to push back – a hard look here, their likeness roasted in effigy on the front lawn there – they seemed to take it all in stride.

Mr. Rogers these sister/lovers were most certainly not. But most egregious of their offenses was the simple fact that they were here and none of us could fathom why. 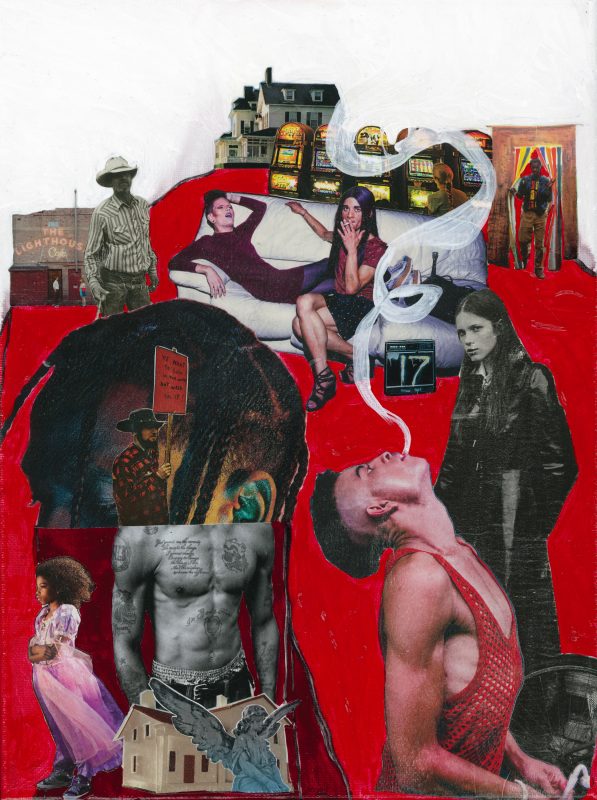 Having money removes the “why” from so many of life’s equations. That’s something the locals don’t understand. Why did we move to this house? In this town? Why paint said house hellfire red like in that Clint Eastwood movie where he plays a ghost who unleashes revenge on the townspeople who stood idly by as he was whipped to death years prior? Why build a swimming pool, fill it, then empty it in case we ever learn to skate? Because when you have money, it doesn’t make sense not to do those things. Obscene money inverts logic. Simone and I explain this to our new neighbors but lose them around the Clint Eastwood bit.

We tell them we’re here to build bridges, not just squash courts – a joke they don’t seem to get. We paper the streets with flyers for informal little parties (Drinking! Finger sandwiches! Slots! Skate Pool! Hugs AND Drugs!) and slowly but surely a trickle of societal dregs darkens our door. There’s even a cute cowboy with Biblical tattoos and washboard abs (washboards abs in the middle of nowhere!) who Simone and I both fancy and arm wrestle over before calling it a draw and deciding we’ll just take turns. “See,” Simone says to our guests one night as she passes out juice boxes spiked with bath salts. “We’re not all bad.” 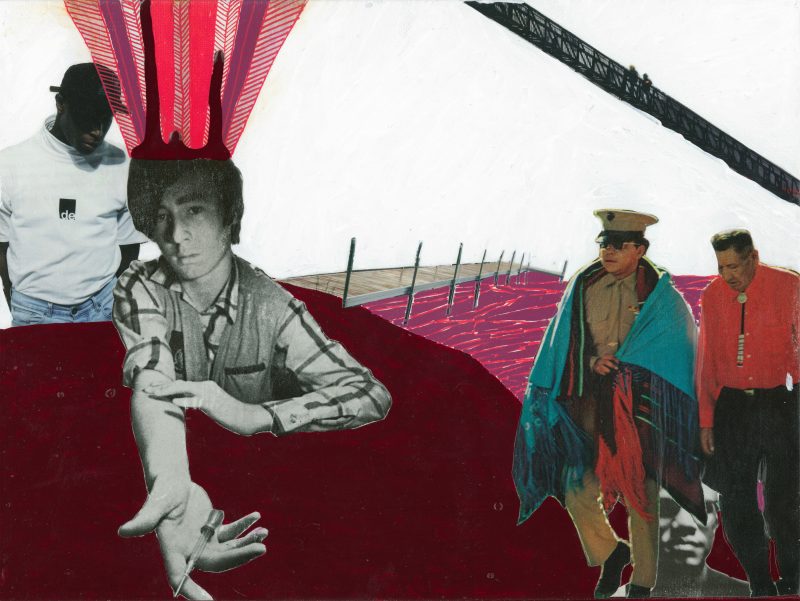 The Mayor, Ted or Bird Running Stream depending on his mood, was elected by default but still liked to troll town chauffeured in his chipped yellow Lincoln with a massive speaker strapped to the roof, blasting old war stories, campaign chants or reciting Native American doggerel into the night. Sometimes the car circled for hours emitting only the Mayor’s snoring, cracking like knuckles. A half dozen Nation of Islam-types swarmed him everywhere presumably for safety, definitely not for camaraderie by the grim look of them. They seemed efficient in their corruption and graft and, for a change, it wasn’t another bloated white man feeding at the trough. At least we had that. If we ever did have another election, it was fair to say Ted or Bird could squeak a victory through on that fact alone.

There were few rules in the municipality but the laws that did exist – no public defecation, no white pizza, no puppy mills, no Starbucks, no witchcraft and Mayor Ted or Bird always gets a taste – were scripture.

With that in mind, we looked on with great interest as the mayoral Lincoln shrieked to a stop in front of the sisters/lovers residence on a balmy Sunday night. The women of the house were home; their silhouettes practicing the tango or mambo or something in an upper level window with their whackadoo music characteristically cranked. If they saw the Mayor and his entourage descending on their doorstep, they didn’t show it and kept dancing 1-2-3, 1-2-3 while the Mayor leaned on their buzzer with his walking stick. Weaned on savagery and bloodshed, we leaned in with interest as this had all the markings of an old school showdown. 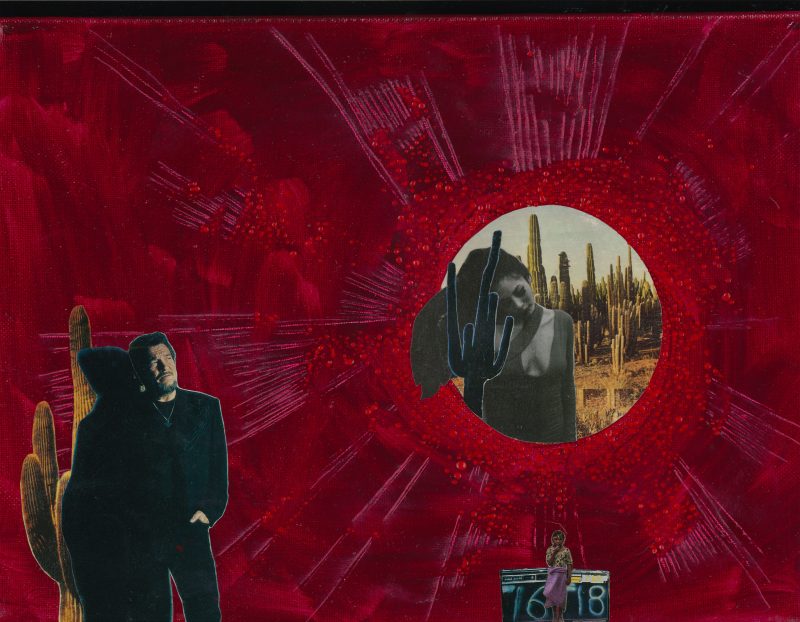 At first we thought our presence was, as they say, our present. Like when celebrities have layovers in war-torn countries to raise awareness. We were contributing to the local economy with the liquor store on speed dial and our vintage shopping sprees – Nina alone bought a small jungle in amateur taxidermy. Neither of us had eaten a carb since 2003 and still we bought out the church bake sale. We employed a rogue’s gallery of local contractors, dog walkers, towel boys and cigarette girls. At yet the Mayor still paced our porch that night, driving his cane into our floorboards and calling us interlopingcarpetingbagginggentrifiyingparasites and worse. His demands that we wet his beak were met with baffled shrugs.

A FaceTime session with our healer yielded an idea to record an album the proceeds of which would benefit the town. The sound, like us, would be a little bit country, a little bit rock ’n roll, a little bit primal scream therapy. We imported an all black wearing producer friend from the desert and instructed him to bring a U-Haul of ayahuasca. We reached out to the high school marching band, recruited the church choir and bribed the local barbershop quartet out of retirement for accompaniment. We wanted, no demanded, The Red Album be a group effort. 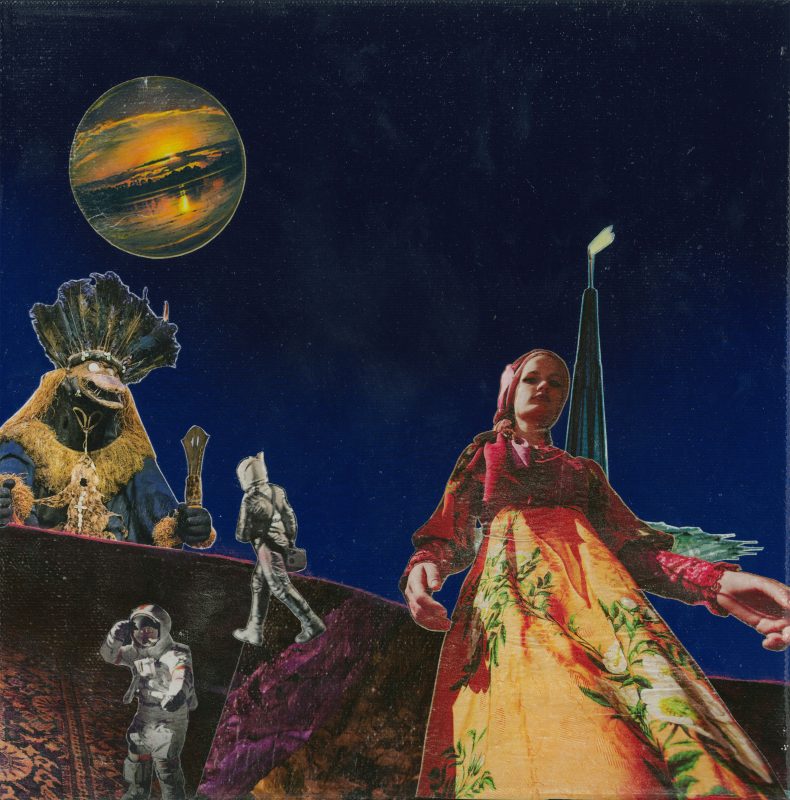 Whispers of an album gave way to rumors of a festival snowballing to gossip of ‘a happening’ and soon enough gleaming convoys clogged the three traffic light main street, there was a run on beer and rolling papers and the diner was besieged with patrons ordering off the menu and convulsing with rare allergies. Like no other stunt by the sisters, this event divided the town with half of us sitting porch side palming our shotguns and the other half flashing proof of local citizenry with a shrug to be allowed past the barricades.

Those of us who abstained caught flashes through the fencing and shaky helicopter footage on the local news unlike any county fair we’d ever attended. Squirmy flesh-colored hordes packed in like canned meat, pulsating bacteria-style in a petri dish. Moon men doused the throngs with a rainbow of dustings. Some kind of gigantic mascot, a monster really, oozed through the crowd, molesting everything in its path and leaving even our intrepid Action Five News team dry-mouthed. Whatever music there was seemed drowned out by screams and the multiplying news choppers dissecting the sun. The miles of barricades creaked and shuddered all hours of the night, straining to contain the secrets inside and threatening to spew the mess like infected ejaculate up and down our streets.

Nothing was for certain except the knowledge that those that had gone would not return the same. 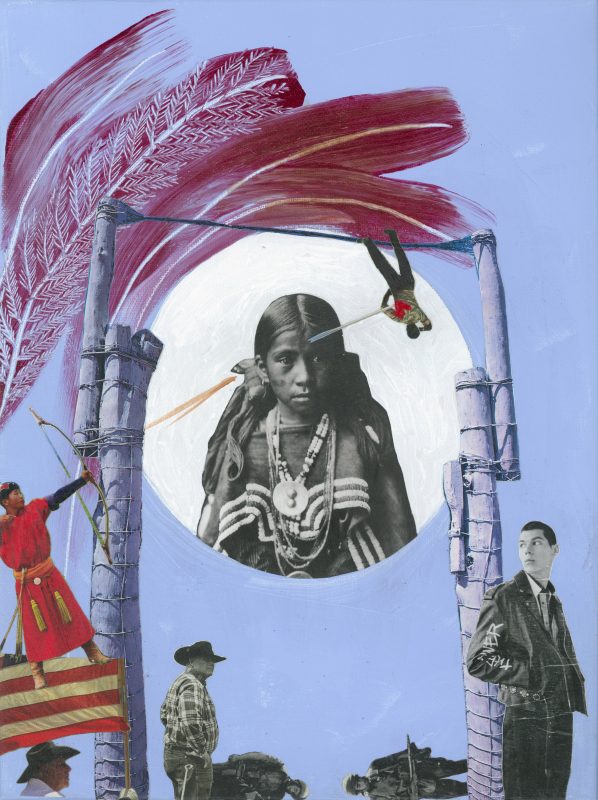 Every so often we find something – taxidermied moose, warped vinyl, tribal tattoo – we forgot about and that summer comes blooming back. We open another bottle of wine and our memories foxtrot. Nina insists we weren’t summering that we lived there for years. I recall we were there for rehab; she says we were in exile. I remember it warmly; she describes ‘an emotional eclipse.’ I recollect a spring ‘happening’ that brings tears to my eyes; she recalls a nightmare of sorts involving an old vat of our father’s tactical herbicide being mistaken for liquified ayahuasca. She insists we left the town in handcuffs while I distinctly remember a parade.

At least we can agree on one thing – a child was conceived. She sits by our feet, too young for wine in her headdress and Navajo beads. She’s the best thing that’s ever happened to us, the bi-product of us and that town like soil weaved tight into a passing tire’s tread. The Mayor, the cute cowboy, the throngs at the happening; we were never ones to pinpoint paternity.

Another bottle of wine from now Nina will shake her head and remember the hours turning to days conceiving in a rusty clawfoot tub. I’ll laugh, poke her with my toe and remind her “Nina, that was me.” She’ll tilt her head in mock reproach and tell me ‘you’re Nina.’

Vanessa Compton’s sculptures and collages have been exhibited in galleries across the US and appear in private collections around the world. She has been awarded fellowships from The Wallace Stegner House, Vermont Studio Center, Hubbell Trading Post & National Historic Site, The Brush Creek Foundation, and Jentel Arts. Vanessa creates art throughout the American West and the Northeast Kingdom of Vermont.

Duncan Birmingham is a writer and filmmaker in Los Angeles. Most recently he was a writer/producer on IFC’s Maron (with Marc Maron), Starz’s Blunt Talk (with Jonathan Ames) and David Fincher’s never-aired HBO show, VideoSyncrazy. His fiction has appeared in Brooklyn vol 1, Joyland, nerve, Word Riot, and America’s wildest tabloid, The Weekly World News. He’s the author of the ridiculous humor book, Pets Who Want To Kill Themselves and his short films have played the Sundance, AFI, GenArt, Miami, LA Film Festival and the New York Film Festival.