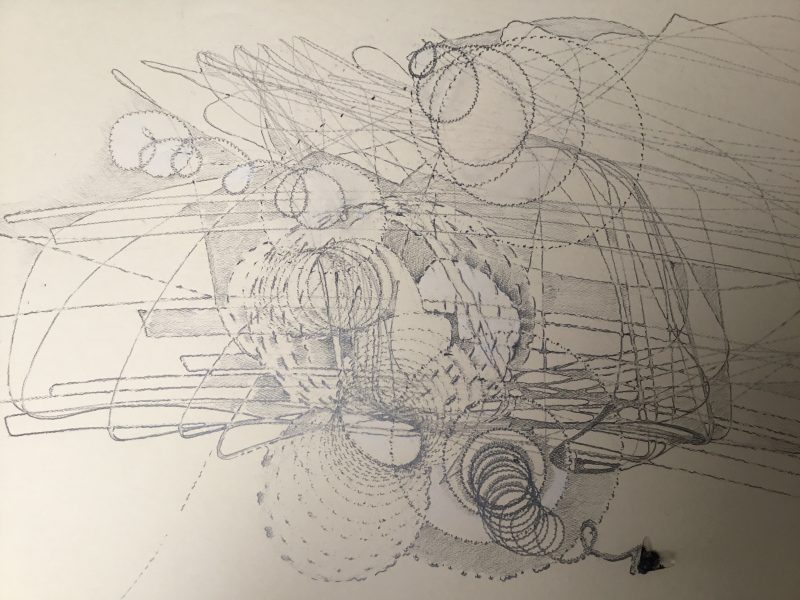 It’s like an itch, a fucking itch, I can’t get rid of it, this impulse to … move. To move? No, not just to move, that sounds so linear, so directed, when what I’m talking about is more in the realm of a spasm, series of spasms, itch becomes twitch becomes switch become which. As in: Which way am I going? Which direction do I turn? All of them at once, if this buzzing in my brain is any indication, too much information, too many stimuli, the possibilities are endless, so endless I cannot even recognize them as possibilities. Instead, I hum and waver, spin myself in circles, Doppler out through time and space in a cacophony of vapor trails. Leave nothing but the merest traces, echoes of my circling, of my turns. I keep thinking about Yoko Ono: The body is the scar of your mind. The body, yes, or the echoes it leaves behind. How could it be any different when the air remains full of swirls and tracks? It takes a special set of eyes to see them: compound eyes, thousands of simple lenses, not just second sight but a mosaiced vision, world in three dimensions like collage. The pattern only asserts itself when we have gone still and silent, when we have finished moving — death perhaps, or maybe a respite, a moment to catch our breath. I heard a fly buzz when I died, Emily Dickinson wrote in another century, ink scratches like spasms on paper, but what about musca domestica itself? Does it, can it, hear its buzzing, or is that below the surface, a series of spirals like whispers, evaporating although not really: Fly. 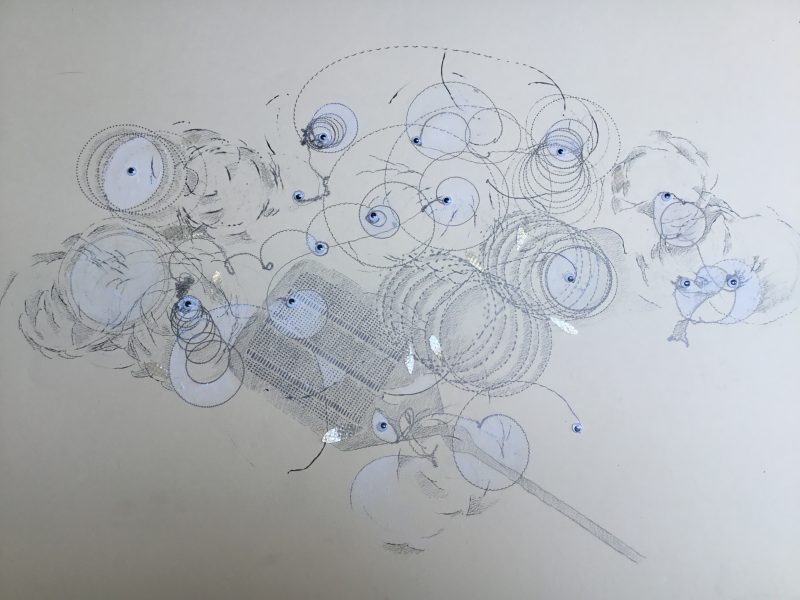 Fly. I. Eye. Sixteen eyes, each blue, with a black pupil at the center, pinned as if the world were a construction of the mind. Sixteen I’s, that invariable variable, foursquared, two-cubed. Cubed, cubic space, we are all just small containers, looking outward as we circle, as we fly. Squared, foursquared, as if we might leave a trace of ourselves at every destination, some sort of existential residue. Does anything happen if we don’t see it? Does anything happen if it does not cross our eye? Is a fly swatted if it doesn’t watch the wand come down, the flat edge of the swatter, like an apocalypse in real time? My wife, she loves to swat flies … although no, perhaps loves is not the proper word. It’s not bloodlust, after all, not killing for the sake of killing, but more a reaction to all that buzzing, all those eyes. Sometimes on an afternoon in summer, I watch her in the kitchen, tracking a housefly until it lands. Slow and silent, like a hunter, she rises up behind it until — BOOM! The fly swatter lands with a sharp crack. It does not sound like a gunshot, no need to be metaphorical; it sounds like exactly what it is. Small splinter of doom, after which she gathers up the carcass, drops it in the trash in a paper towel. This is, I want to say, what happens to all of us, but then, that’s not really true. Or is it? From the illusion of sight to the dustbin of history, we are already gone even as we circle, eyes wide open, looking to circumnavigate: Swat. 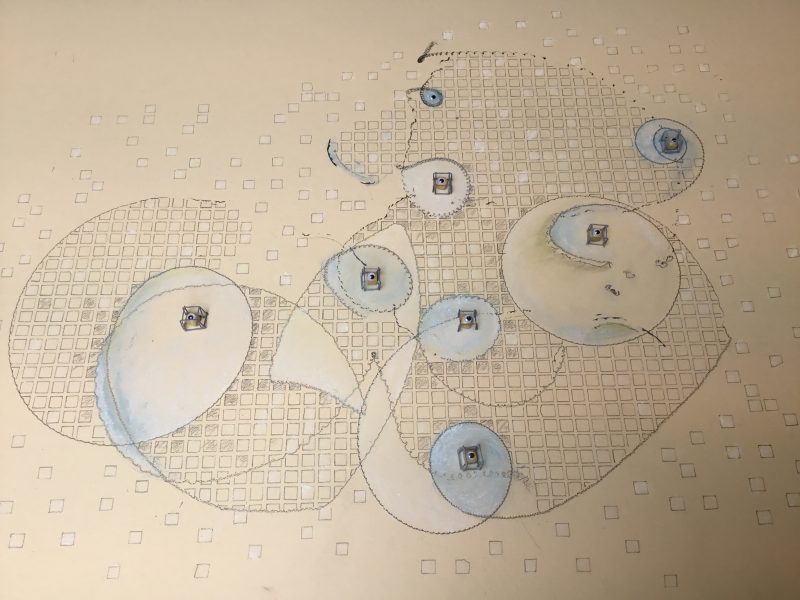 But what are eyes without faces, without a frame in which to set them? What are eyes if they are disembodied, if they don’t add up to anything? Eyes, I’s, flies, distinct and differentiated … until, that is, they are not. It makes me think of math, although I don’t believe in numbers, lack faith in their ability to console. Where are the questions in a set of numbers? Where are the variables we can’t explain? Numbers only speak to us when they are running out, like sand in an hourglass, like an eye about to close. Until that moment, they are useless, knowledge that doesn’t add up to anything larger than itself. No, we need to blur the lines, to see form square cut from chaos, even as we know it will revert. No, we need to coalesce the circles, to see them become cubes and squares like floor tiles, a pattern across which we might, momentarily, walk. No, we need to invent a brand new order, to see our eyes framed by nose and chin. Call it shape, call it coherence, call it the imagination playing off the raw data of perception and imposing upon it certain textures, certain rules. It’s uncanny how quickly this can happen; just take a gander at the moon. An ancient rock in space upon which we have projected millennia of fantasies. I’m looking at one now, man in the moon, nose small, less than fully centered, single eye, like that of a Cyclops, protruding from forehead. Would you believe me if I told you it had grown out of the grid, out of the background, a momentary assumption of … something, before the mosaic shatters, and the tiles, the squares, break into background again? 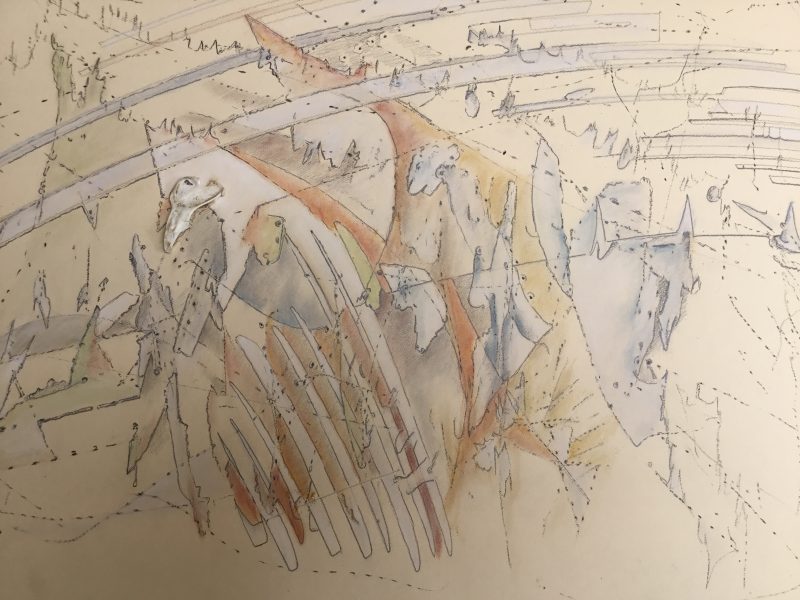 I saw a ghost once, I was nineteen, asleep in an apartment bedroom in West Philadelphia. Middle of the night, my girlfriend and I nestled across a single mattress, bottom of an old bunk bed. It was humid and we were, must have been, naked, plastered to the sheets with sweat. The ghost climbed the wall like a pair of wings, translucent, as if a film had swept across my eyes. Film? No — fly, I, eye, enormous insect, Luna moth bleached clear. It did not have a face, not even a head, not that I remember, although it did have two small black balls for eyes. Not unlike the ghost I’m seeing at this moment, arms raised in menace or in supplication, face two ragged lines of dots and dashes, haunting as a bit of code. What is this ghost trying to show me? What does this ghost want to say? Get out: Isn’t that what ghosts are always shouting? Although in Philadelphia, it didn’t feel that way. Philadelphia: City of Brotherly Love, and what if I were to tell you that this is where I met my wife (or, as she was in that place, at that time, my girlfriend), that this was where I fell in love? What is love if not a spasm? What we are also, seeds and whispers, a set of wings, a passing shape, a breath of the imagination: Ghost.

And is it all just movement towards distinction? Or is extinction the more appropriate term? The lifespan of a fly is twenty-four hours, a single day in which to be born, to mature, to dream and fly and fuck and then grow old and die … that is, if you’re not swatted first. A day, it isn’t much, hardly even a promise or a breath. Still, what if that is all you have? I remember that ghost, the fine lines of its demarcation, those wings articulated but remote, ethereal, as if hardly even there. I remember how they sparkled like cellophane, flashing blue and white in the darkness of that room. I wonder what they concealed or contained, whether they existed or were the leftover fabric of a dream. You know what I mean: the waking dream that doesn’t feel like sleeping, although what else could it be? In January, I had a dream like that — a voice, as I was on the edge of sleeping, warning me about mortality. Ever since, I’ve had Elmore James stuck in my head, that last verse of “Dust My Broom”: I believe, I believe my time ain’t long. The lyric was added at some point after the original Robert Johnson recording was made, in Room 414 of the Gunter Hotel in San Antonio, Texas in 1936, but that’s the point, isn’t it, that the blues are a living form? And yet, what is living? Just this, time for as long as we possess it, which is another way of saying: Dream. 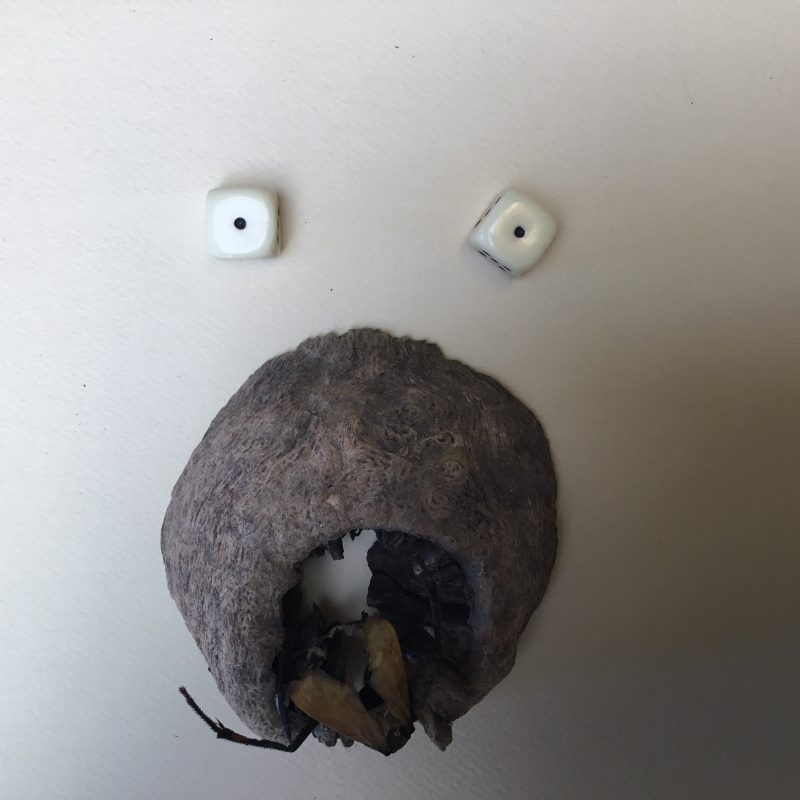 Snake eyes. In ancient Rome, they were called the dog throw, bad luck, losing toss. I, however … I don’t see them in that way. I love dogs, find deep consolation in their company; for me, dog throw would win the game. Still, here they are, stark black and white, dot dot, like a message sent by telegraph. Dot dot designates the letter I in Morse Code: I, eye, fly. Dot dot is the building block, the letter that asserts itself as word. Word? Not only that, but personality as well. How many of my sentences, my thoughts, begin with that letter? I me mine, I me mine, I me mine … Once, I was asked to list the words I use to excess; is it a surprise that these are those I chose? How could it be otherwise when the face in the mirror is my own? Eyes, pinned and piercing, tiny black pupils like students of the world. Nose and mouth a snout, like a dog face, which is what American GIs were called in Europe during the Second World War. And at the bottom — yes, that fly again, segmented leg protruding, unclear who is devouring whom. Flies are a source of protein, yes they are, although I have never eaten one on purpose. Yet in the end, they will swarm over me. Fly, eye, I, that long progression, extinction to identity. (Or is it the other way around?) Either way, filtered through my gazing: Eyes. 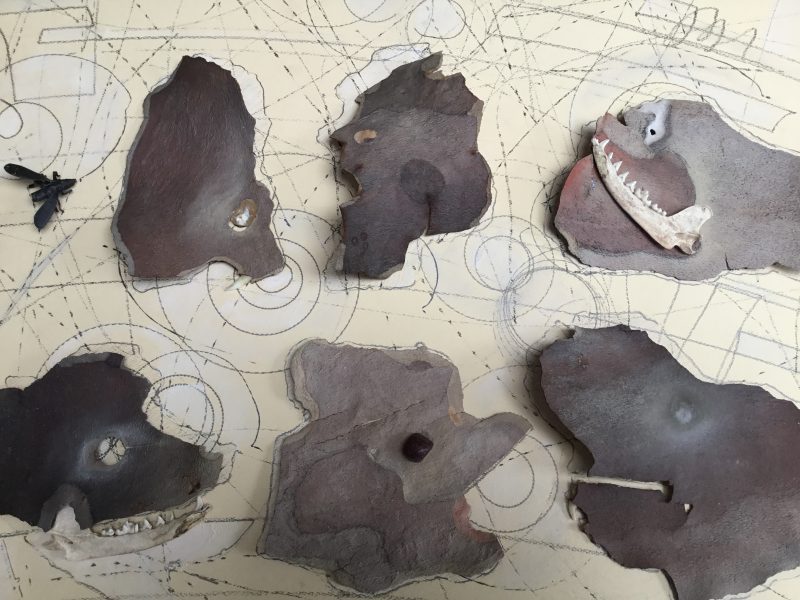 And now we come to the finale, all our faces, all our eyes, spread out across the table, map of overlapping circles, dogs and humans and that pesky fly. Dogs are great but dogs are temporary, as we are. Every time I’m with one, I think about the shortness of time. Time? Their time, our time, it is interchangeable in the end. Today is my birthday, 55, pair of fives: Puppy Paws, Pair of Sunflowers, Pair-a-Roses in the vernacular of the dice. From dog throw to puppy paws, from fly to eye to I and back again. I want to be a pair of sunflowers, I want to be a pair-a-roses, I want to be a pair of ragged claws scuttling across the floors of silent seas. I want to be a bleached white jawbone, still fitted with a line of failing teeth. This morning, on the Internet, I was reading about the Tufts-Love skull, a complete Tyrannosaurus Rex skull unearthed in Montana, along with vertebrae, ribs, hips, and lower jaw. The skull is 66 million years old, which gives a new (old?) spin to the question of time, of (im)mortality, of what remains and what dissipates. I, eye, fly — I am that dinosaur, a ring of bone beneath my skin. Fly, eye, I — these stories are my fossil record, trace of my existence, to be uncovered or forgotten as time insists. I don’t believe in posterity or eternity; I don’t believe in anything but this. Just you and me and that’s reality, the long and the short of it: I.

Tom Jenkins moved to LA in the mid 70s after receiving a MFA from the University of Colorado at Boulder. He began showing at LAICA (Los Angeles Institute of Contempory Art) doing sound performances. In the eighties he began addressing the ecology of LA with sarcastic high gloss enamel paintings on metal. Tom has taught at Otis Art Institute, UC Irvine, and Santa Monica College. He is currently working on a series of abstract canvases using invented drawing devices to form the image.

David L. Ulin is the author, most recently, of the novel Ear to the Ground, written with Paul Kolsby. A 2015 Guggenheim Fellow, his other books include Sidewalking: Coming to Terms with Los Angeles, shortlisted for the PEN/Diamonstein-Spielvogel Award for the Art of the Essay; The Lost Art of Reading: Why Books Matter in a Distracted Time; and the Library of America’s Writing Los Angeles: A Literary Anthology, which won a California Book Award.