The rage in the eye of Captain Doom. As when he sights upon his treasure, his diamonds and rubies big as apples, his gold doubloons, royal virgins, prize hens, fine wines, succulent fruits, his Alexander III Commemorative Egg, jewelry of all sorts, signet rings and skirt lifters and bangles and promise pins, but mostly silver necklaces. The treasure spilling out onto the yellow sands of Doom Island. And up on the rocks, the black façade of Castle Doom. Waiting in the doorway of Castle Doom, the soft, sallow face. The long, gangly arms and protruding belly. The meaty, needy grin. The sorry excuse for a beard. The rage, the rage in the eye of Captain Doom. Rage that sets his hook a-vibrating, that splinters the end of his peg when he sets his sights upon his imbecile, idiot, asinine brother, Charlie Doom. 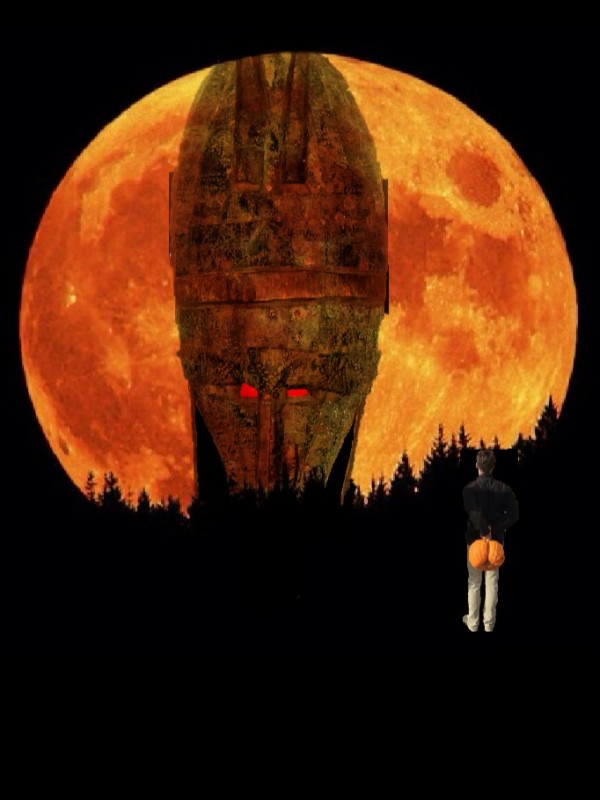 When the moon is a blood-gorged etcetera etcetera, Charlie Doom goes sailing. What happened to Captain Doom, you say? The royal virgins happened, the fine wines happened. Captain Doom is laid up in bed, spewing bile. He curses his stomach, his liver, his gallbladder, his spleen. While Captain Doom is cursing, Charlie Doom steals the ship and goes sailing. The first place that Charlie Doom sails is Fort City. When he sees the walls and towers and sixty silver domes and golden cock weathervane that rocks softly in the breeze, he broadsides the ship and raises the Jolly Roger. He lets loose the cannons.

The report of cannons woke me up from my midafternoon slumber. I poured myself a cup of oolong and sat with my tea on the veranda. Below and in front of me spread the red-tiled roofs and white walled buildings of Fort City. The ocean and sky were two blue mirrors. I did not like cannon fire, the acrid smell of gunpowder blowing in from the water. But the ship that was firing was too far out, a speck on the horizon. The cannonballs fell well short their target. I had to lift my spyglass to see them, the tiny white splashes.

With my glass I could see the the boat was Captain Doom’s, the S.S. Doomboat. But what was he doing back here already? Had he not just come and taken everything from us. He took my trusty dog Rusty. He tore up the floorboards and took away Matilda. I still missed her sometimes. I would find a blonde hair curled in a brush. A single sock underneath the bed. Or I would call her name, ring my tiny bell and ask her to refill my Port.

After my oolong and a slice of huckleberry pie that I’d left cooling on the window, I strolled down to the harbor. The ship on the horizon was still firing but not even the seagulls were bothered.

I saw my friend Jim, the fisherman, stuffing his pipe and kicking pebbles into the water. I asked him what Captain Doom wanted this time.

“Captain Doom?” said Jim. “That ain’t no Captain out there. That’s Charlie Doom. His brother.”

I stuffed my pipe too and we sat there on the docks, smoking and watching the sun paint the water.

Matilda on the beach. Matilda under the moon. Matilda in bed with Captain Doom. It was not so bad there. Captain Doom has the highest thread count sheets. He has the softest silk pajamas. He has a faux bearskin blanket. The dog red Rusty sleeps at the edge of the bed, warming her feet.

They say you can tell a lot about a person by the way they treat their animals. Captain Doom is kind to all manners of creatures, furred and fowl. He lets the dogs sleep on the bed and the ducks waddle in the bathtub. The game hens roost in velvet-lined coops. In the winter the horses stand in the kitchen next to the fire. All of the animals are well cared for on Doom Island. It’s only the people that Captain Doom doesn’t like.

The vilest wretches in all of creation, he says, always spitting when he says it. And even then he can stand the women better than the men.

“You’re not even as bad everyone says.”

Matilda reaches across the bed and rings the silver bell on the nightstand. Soon the manservant will be there to clean up the vomit. Hopefully, thinks Matilda, he’ll bring a plate of fluffed eggs. It’s very nice here, Matilda thinks as she eats her fluffed eggs and sips her blood orange juice. Captain Doom snores softly, his complexion still green. She strokes his black beard and thinks of her man back on Fort Island, his loud bronze bell and Port wine. It’s nice, she thinks, to be the one who gets to ring the bell every once in a while.

She rings the bell and waits for the sound of footsteps clapping up the stairs.

There was no other way around it.

“There’s no other way around it,” I told Jim.

“Around what?” said Jim.

I could feel her need for me ringing across the ocean like a bell. Jim drank his pipe and exhaled a cloud over the water.

“And how are you going to do that?”

“We’re going to take his ship.” I nodded at the S.S. Doomboat still floating on the horizon.

“Then we set sail for Castle Doom.”

They call him the idiot, but he is not the idiot. An idiot does not know when he is beat. When they came for the Doomboat—two score, three score, however many is in a score—in their rows of rowboats, Charlie Doom raised the white flag and smiled his dopey grin. It was not his fault that his grin was so dopey; it was his parents’ fault and his parents’ parents’ and etc. Generations of brothers and sisters and first cousins who’d married and bred and married again. They were inbred all the way down. Captain Doom was the worst off of any of them. Cut him and he’d bleed for hours. He drooled rivers in his sleep. In fact, Charlie was somewhat better off than his brother. Sure his bones were brittle as biscuits and his eyesight failing, but he had a mean talent for rhetoric and oratory. When they came he did not surrender the boat but traded it in exchange for Jim’s tobacco pipe, a sack full of limes, and a rowboat that he used to paddle to the Azores. In the Azores he got a dog, built a hut next a banana tree, and lived happily ever after.

As for Captain Doom.

Then he sees his Doomboat break the skyline and tells Matilda to hide herself under his floorboard. He cocks his pistol and draws his sword.

He is in a doom mood.

The moon is a blood-gorged tick and the fish are in a frenzy and his head is a bell that is pealing.

Jerry Byrd was born in Fullerton, California and earned an MFA degree from the University of California at Irvine. His paintings are in the AT&T building in San Francisco and the IBM building in San Jose. He has also illustrated a college algebra textbook for MacMillan Publications. He was a recipient of the Fine Arts Patrons Award and has held a Fellowship from the National Endowment for the Arts. He lives and works in Venice, California.

Bryan Hurt is author of Everyone Wants to Be Ambassador to France, winner of the Starcherone Prize for Innovative Fiction, and editor of Watchlist: 32 Stories by Persons of Interest, a new edition of which will be published by Catapult in May. He’s working on a novel about an airport.