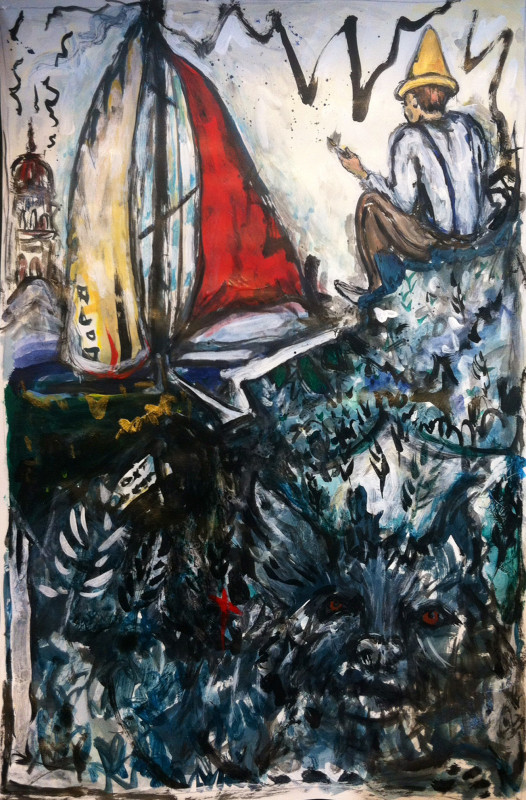 I traveled to this village once as a child—it was on the Amalfi coast, near Pompeii, the village that ash from a volcano had preserved perfectly. My family was living in Italy. We were refugees, waiting for the United States to approve our immigration status. I was only four then but my sister was seven and she confirms my memory of that afternoon. My family had not intended to stop at this village, but on the train my father was offered a job by a short, hirsute man. My mother, my father, my sister, and I disembarked with that man, whom I seem to remember having a limp. We walked for what felt like a very long time carrying our bags to this man’s shop.
I remember sitting outside with my sister, on the edge of a cobblestone street across from a bakery. It was hot and we were hungry. We were told to stay put while our mother talked to the baker, but then we saw the cats. First one ran by, then another, then a whole flood of cats ran past us. Though we rarely disobeyed our parents, curiosity got the better of us and we followed the cats, through the narrow streets and alleys and finally onto the beach. There must have been hundreds of cats on the beach. I remember watching in shock, as one by one they entered the ocean and disappeared. 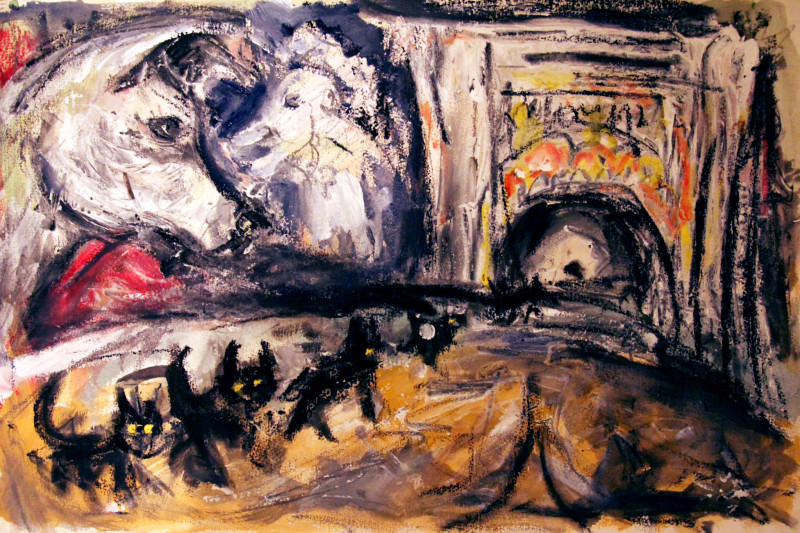 Later, when I became a dog, I would think about that afternoon in Italy with a strange mixture of revulsion, excitement, and nostalgia. Those filthy cats swarming the streets of the village and then disappearing so mysteriously into the ocean…Those filthy, wet cats filling the water!
Few memories from my human life have brought me much happiness, which is why most of them have receded. I can only vaguely recall the house I grew up in, the boarding school in Michigan, my job as a waiter. All my memories have dimmed, with exceptions of those that involve my current interests: cats, squirrels, feces, and Dolores.
Dolores.
She is, of course, the reason I became a dog.
Some people have asked me if I regret my decision to become a dog. I have seemingly given up so much. But as an immigrant the idea of straddling two worlds, existing as two people in one body, it was not foreign to me. As a dog or as a human, I am still me. 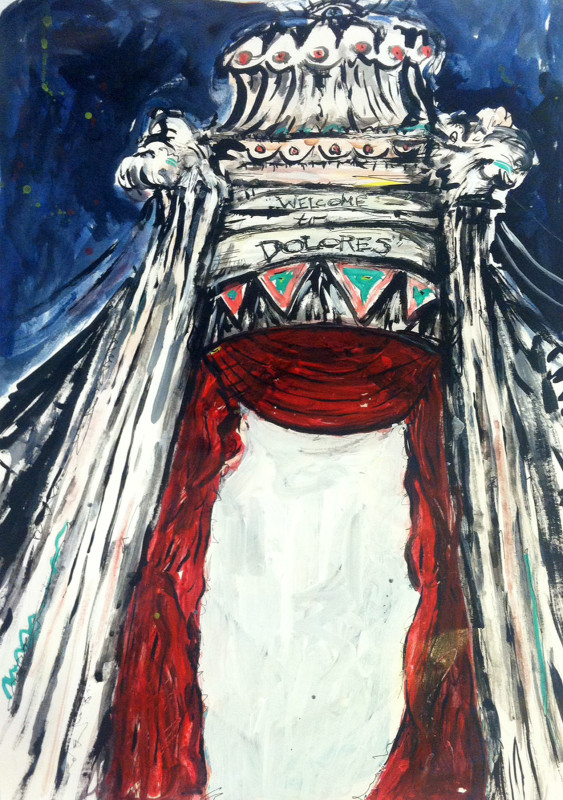 As humans, Dolores and I were inseparable. We met in kindergarten. She helped me learn English. We sat next to each other in all our classes and when the other children laughed at me for being strange or wearing my pants and hats wrong, Dolores always came to my defense. Once she even threw a rock at the bully’s head, and he needed stitches.
Eventually Dolores grew into a busty young woman, moved to Las Vegas, and became a showgirl. A rich roughneck took a liking to her.
He said: Dolly (he called her Dolly though she couldn’t stand it). He said, Dolly, what do you want? I’ll do anything you want? I’ll buy you anything. You want jewels? You want furs? You want a nice car?
And she said, no, she had no use for any of that. Who needs furs in the desert? Besides, wearing furs always gave her a strange feeling—being inside someone else’s skin. It was disgusting. But, it also filled her with complicated longings she was not yet prepared to deal with.
“Well, what can I get you, babe, what can I get you?” Her sugar daddy asked.
There was one thing Dolores had always wanted.
“Build me a theater,” she said. “In the desert, outside, underneath the stars.”
So he did, and because he was that sort of man, he covered the proscenium with models of her boobs. 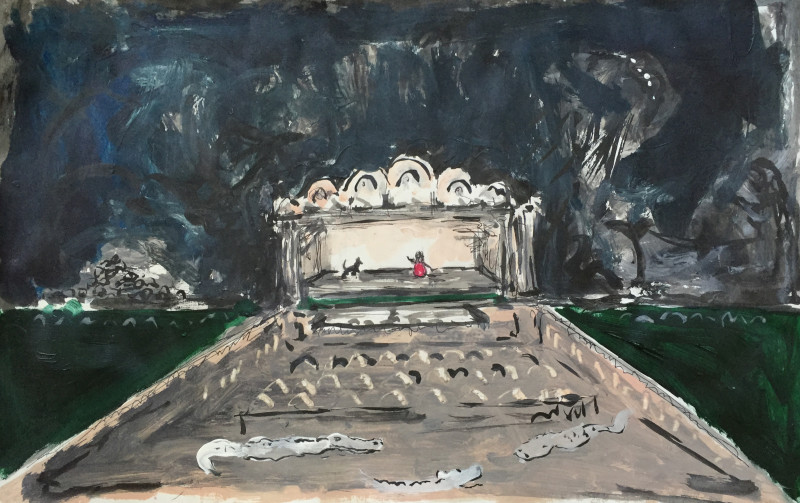 Later, after she left that man, Dolores took the theater with her. She had it deposited on a swampy plot of land, which she inherited from a dead uncle. I believe it was in Southern Louisiana. I never visited her there or saw it myself. I had lost touch with Dolores. I was at that point busy with my own life, beginning an unhappy marriage, denying my true urges, going to school to be a phlebotomist, a calling I was not suited for in the least, and working at nights as a waiter in a fancy restaurant downtown. Dolores was a distant vision, a fantasy at that point. A person who had managed to escape the bleak tableau of my life. 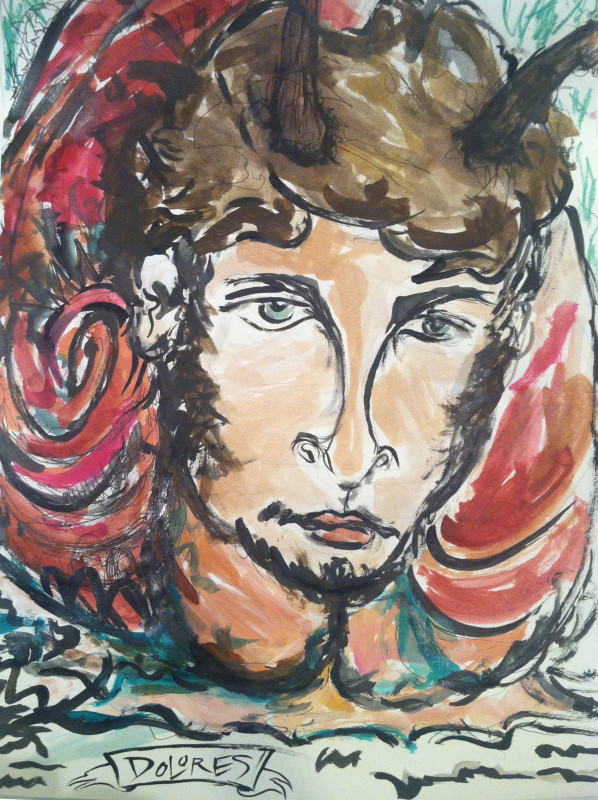 As my marriage was falling apart, I began to take many long walks. One day, I heard someone calling my name, but in such a small thin voice, I thought maybe I had imagined it. I began walking again, but no, I heard it very distinctly: Lev, it’s me, Dolores.
I froze in my tracks. Dolores had been in the news a lot lately, because she had disappeared. I looked around, and of course, I couldn’t see her. A crazy thought occurred to me that I was being visited by her ghost, which is absurd. I don’t believe in that sort of thing.
And then I heard the voice say: Look up, to your right.
I looked up, and there, on the mossy, stone wall was the strangest thing I had ever seen—Pushkin’s head on the body of a snail.
This was a lot to take in. Alexander Pushkin was my favorite poet. My sister and I memorized his poems as children. He was our idol, and I remember showing Dolores Eugene Onegin for the first time. I had not realized it would make such an impression. Pushkin wiggled his snail horns at me, but the voice that came from his tiny mouth was most definitely Dolores’s. I watched the shiny path the Pushkin-snail made as he inched towards me.
“Dolores?” I asked. Was this possible? 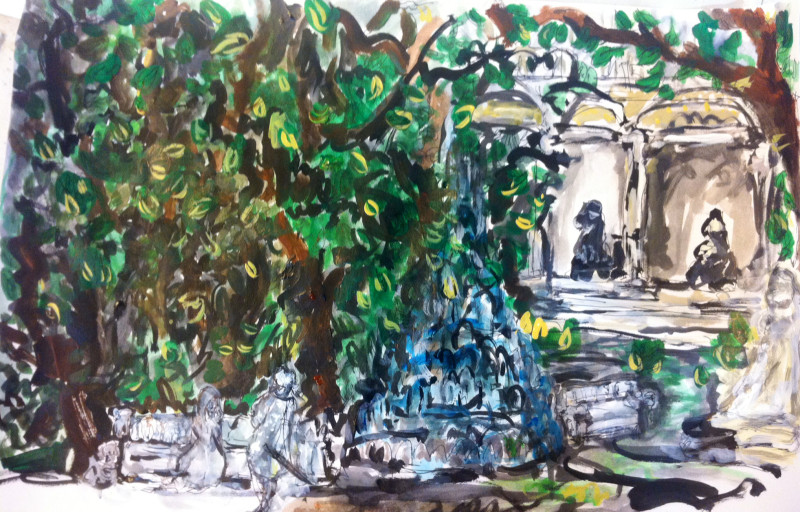 “Yes, Lev,” I heard her voice say. “It’s me.”
It was a sunny, fall day. The street was quiet. Many houses down I could hear somebody vacuuming. I brought my face close to the snail with the strange human face.
“Dolores?” I asked, embarrassed to be put in such an odd situation.
“Lick me,” she said.
“Pardon?” Oh how many times had I dreamed about her saying such a thing to me when we were teenagers and both human.
“Oh, Lev,” she said. “Just do it.”
So I did.
The truth is I love it when people tell me what to do. One of the problems in my marriage I think was that my wife expected me to take charge. In the bedroom and outside of the bedroom too. It was miserable. I never felt safe.
I stuck my tongue out.
“Go ahead,” she said.
So, I licked her shell. I followed its spiral groove with the tip of my tongue. Then I licked her belly. When I opened my eyes, we were both sitting in a garden. It looked a lot like the cemetery we had hung out in as children, but more beautiful and with a waterfall.
And then Dolores told me of her adventures and what I must do. 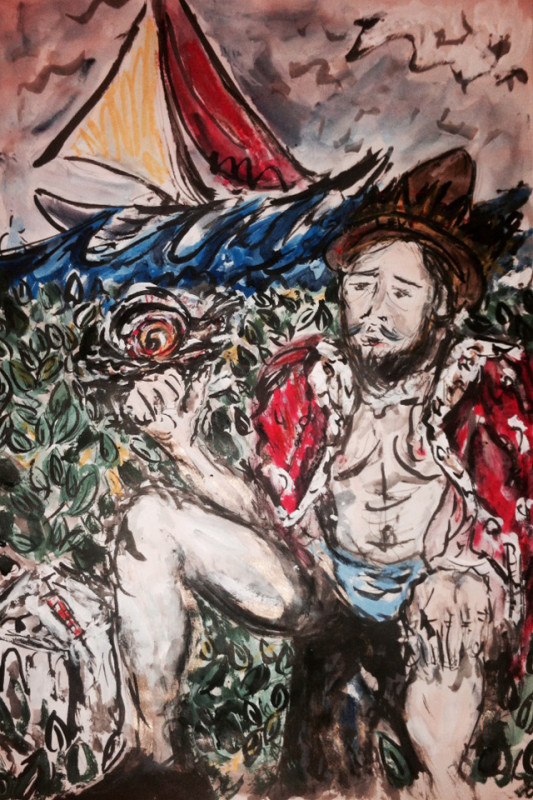 “Remember the last time you were happy,” Dolores said.
It took me a long time. I had to go through many layers of memories before I ended up in Italy. This was the last time I still had my sister and both my parents. It must have been terrifying for them to be stateless and living with so much uncertainty, but they never let on. I remember eating pears on the beach and burying the cores in the sand. We spent so much time by the ocean, looking for green coins washed up on the shore.
“Think of the perfect day,” Dolores said. “And go from there.”

Andrea Markel is a Brooklyn-based painter originally from Knoxville, Tennessee. She regularly participates in group art shows and designs album covers for a variety of musicians. A sampling of her work can be seen at www.andreamarkel.com.

Katya Apekina writes mostly fiction and lives in Los Angeles. She recently completed a novel and had a baby. You can find her short stories in The Iowa Review, West Branch, Santa Monica Review, Joyland and elsewhere; her graphic novel in Better Magazine; her poetry translations in  Night Wraps the Sky: Writings by and About Mayakovsky (FSG 2008).