Time travel was hard on the joints.  It was the one kink they hadn’t worked out.  When you returned — from visiting an old lover’s apartment, or swaying to a slow ballad under the paper stars at your high school prom, or re-experiencing the bright blindness of your own birth — your knees and elbows would ache for days.
Maybe, the doctors reasoned, this new phenomenon partly explained the perennial aches of the elderly.  It wasn’t just the degeneration of the cartilage or desiccation of the marrow.  It was experience itself.  Memory, murmuring through the bones. 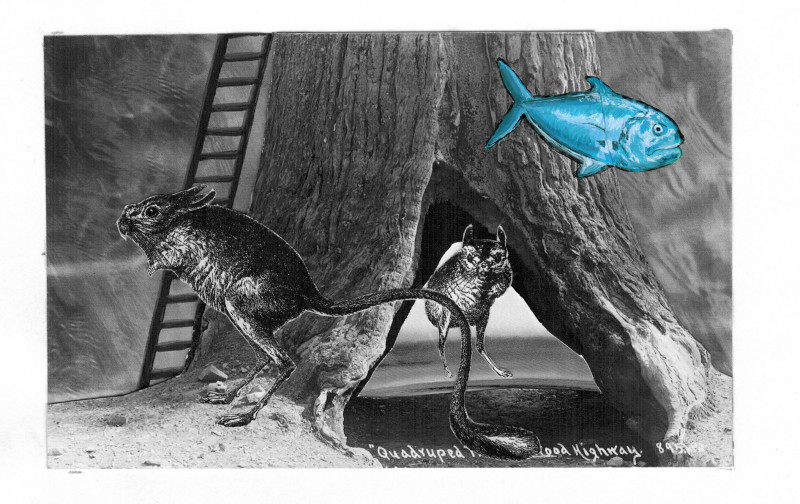 They’d solved the problem some called the Back to the Future Conundrum — the complications that might arise from a future person affecting the past — by making the experience entirely passive.  You strapped on the Mindset, took one of the small pink tablets, and there you were, in whatever scene you chose, in the skin of whichever previous self.  The catch was that you couldn’t change anything.  You were on the inside of the same old pleasures and mistakes.  So there were the nostalgia-seekers, and then there were the masochists, the ones who wanted to silently scream while watching themselves speak the wrong prideful words, or swing their fists at the wrong person, or wake up in the wrong bed.
For the most part, that is. Usually, the time traveler’s destination was voluntary; but sometimes one was drawn seamlessly from one memory into another, without intention.  You’d be slow-dancing one moment, then suddenly you’d be stumbling out into daylight the next morning in your rumpled prom dress, experiencing your first hangover.
But nobody minded this too much, when it happened.  If you found yourself somewhere you didn’t want to be, you could just change course.
All this was exactly as the scientists had expected.  What they had not anticipated was what happened with the children.
In March, a few months after the product had been put on the market, a ten-year-old girl took off her Mindset and said “Mommy, I saw the fish.”
“What fish?” said her mother.
“The fish in the tree,” the girl said, as if this were self-explanatory.  “The fish in the tree with the rats.”
A few days later, a boy about the same age used the same exact words when his Mindset came off: “I saw the fish in the tree.”
No one knew what it meant, but it started to happen all over the country.  Child after child reported a landscape of underwater trees, through which both fish and mammalian creatures swam.  The scientists worked overtime to figure out what the glitch was.  Had some joker programmed a false memory into the Mindset?  The odd thing was that no adult ever reported seeing this landscape.  Jungian psychologists began muttering about the collective unconscious.  Their theory was bolstered by one fact: the younger the child, the more he or she was able to see of this fantastical landscape.  When the scientists finally obtained permission to test the Mindset on children under six, things got even stranger…. 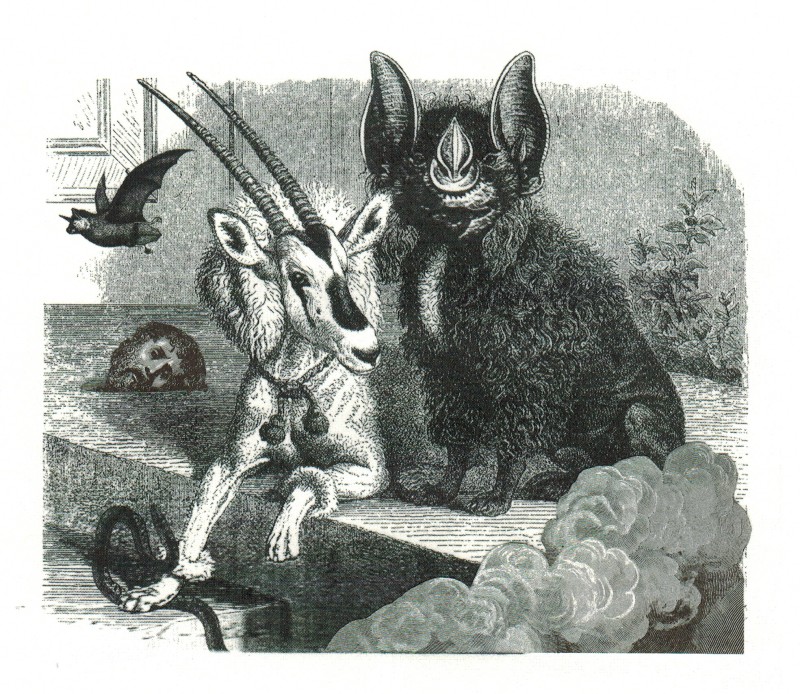 When the younger children “came back,” they spoke an altogether different language, for days on end.  It was as if they’d forgotten how to speak English entirely.  They were confused when their parents didn’t understand them.  They threw temper tantrums, trying to make themselves understood.  They wept in frustration.  After a few days, English would start to return to them in pieces; gradually they forgot the mysterious language.  But the small window after they’d returned allowed linguists ample time to record it so that they might study it later.
After extensive analyses, the researchers concluded that it was no known earthly language, though it did employ certain basic Indo-European linguistic structures.  Gradually, after hours and hours spent with children in the language’s grip, they began to decode it.  And they realized something: every single time a child took off the Mindset and began to speak in the new language, he spoke the same exact opening phrase:
“The horns!  The horns!”
When asked what they meant, the children would reply:
“Well, that’s what the head was saying.  The head of the man.”
What man was that?
“You know — the man.  The one who created everything.  The one who created everything and then they destroyed him.”
“Who do you mean by ‘they’?”
“You know, them.  The ones with the horns.”
After that, the story became so arcane that it was impossible to decipher — but they could make out a few words that seemed significant: the trees.  Purple.  A great big light in the sky.  And all of them were women.  Spiders.  Throats.  Cherries.  Not allowed. Not allowed.  Not allowed. 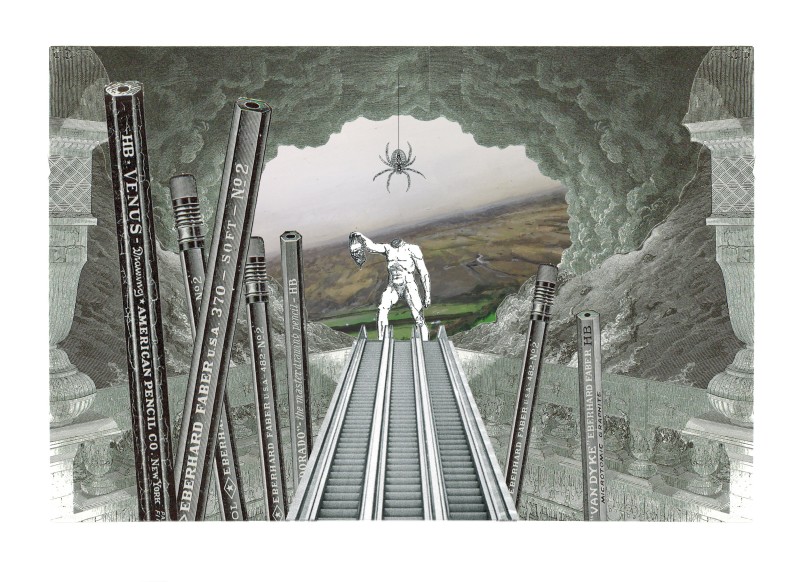 The prominent anthropologist Dr. Otto Ottenheimer was at home with his wife, Clarice, polishing their joint collection of silver baby teeth, when he got the call.
“You’re never going to believe this,” said Dr. Mickey Lowe, his colleague at the Institute.  “We figured out where that story comes from.”
“Was I right?  Is it Sumerian?”
“Get this.  It’s a science fiction story written in 1972 by someone named Art Barclay, which happens to be the pseudonym of a woman named Lorna Spittoon.  You can’t make this shit up.  It was published in an obscure speculative fiction rag called Space and Time.  But it’s the same as the kids’ story, word for word, as far as we can make out.  The first line of the story is ‘The horns! The horns!'”
“Jesus Christ.  What’s her explanation?”
“We don’t know.  She won’t return our calls.  Or answer the door.  But we know she’s in her apartment — her neighbors saw her get home last night.  Otto, we were wondering…” he hesitated.
“Wondering what?”
“Wondering if Clarice would be willing to go and have a try.  To get her to talk.”
“Clarice?  She’s a dental historian, not a social worker.”
“You know how she’s good with strange women.  I mean, remember that dinner?  With Jorgensen’s crazy wife?  People open up to her.”
Ottenheimer lowered the phone to his chest for a moment and looked up at Clarice, who had been watching him fixedly as he talked.  She was a small woman with a long neck and large, almost bulbous eyes, like some exotic water-bird.  She wasn’t pretty, but she had a certain perpetually startled look that disarmed both men and women and earned her their trust.
“I’ll do it,” she said.  “Whatever it is, I’ll do it.” 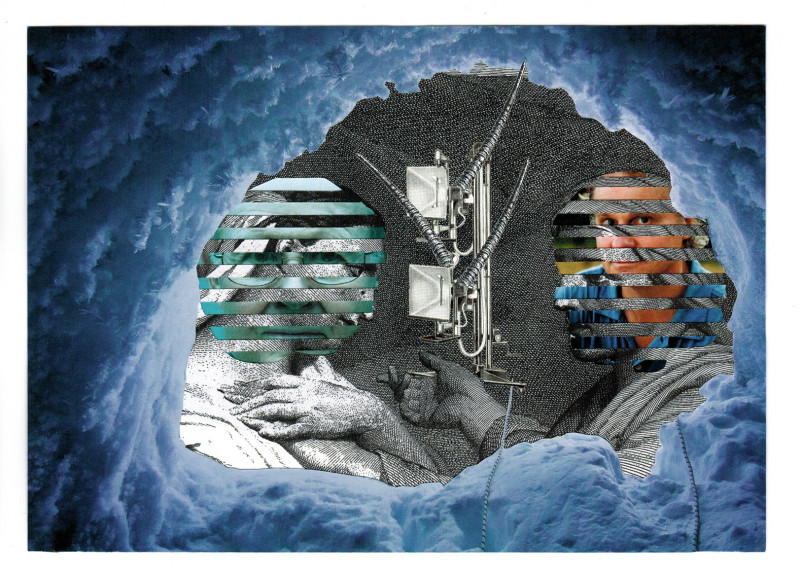 Clarice had her own agenda.  She had long been anticipating the phone call from Mickey Lowe, and she’d known exactly what he would say.  Her perpetually-startled look often worked to her advantage, in this way: people assumed she knew less than she did.
She dressed carefully for her meeting.  She had to walk a fine line between two distinctly different looks: she couldn’t be sure whether she’d find Lorna Spittoon or Art Barclay behind the door, and had to prepare for both eventualities.
Eventually, she settled on a sensible yet form-fitting pencil skirt and a teal button-down blouse.  She left the top three buttons undone.  Once she heard the timbre of the voice returning her greeting from behind the door, she could decide whether or not to unbutton the fourth. 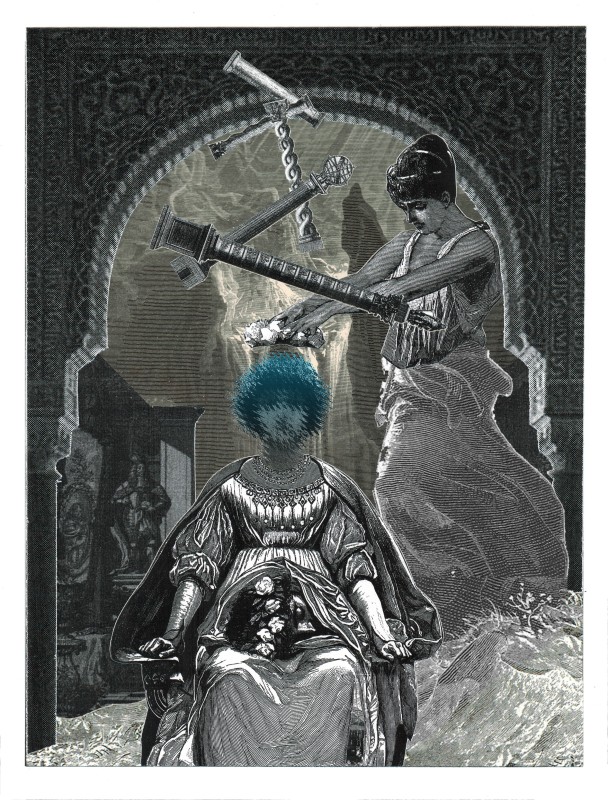 Lorna Spittoon waited behind the door of her tiny studio apartment.  She knew Clarice was coming.  The first knock was her signal to apply her lip-gloss; upon the second knock she made sure her garter belt was in place; just after the third knock, she opened the door, cocking her hip to the side like a starlet.
Lorna looked just as Clarice remembered her.  Every time Clarice had put on the Mindset, she’d gone back to the same day, thirty years before, when she and her cousin’s young wife had snuck behind the apple tree in her grandmother’s yard, giggling.  Lorna had held Clarice’s palm and said We were together in a past life, you and I.  Or maybe it’s a future life. Then Clarice learned for the first time what a mouth could do.  Before, mouths had only been used for speaking.  This, what she and Lorna were doing with their mouths?  It was like speaking and listening at the same time, using their entire bodies, without words.  After a minute, Lorna had paused and slipped out her dentures.  “I lost all my teeth in an accident,” she explained quickly.  “Don’t ever try to high-five someone on waterskis, okay?”  Clarice had been startled at the sight of this beautiful toothless twenty-two-year-old — but this impression was soon eclipsed by her amazement at what a mouth without teeth could accomplish.  The smoothness, the sheer capacity….
Whenever Clarice took off her Mindset, Otto would ask her where she’d gone.  She’d just smile sweetly and say, “The day we met.”  She wasn’t lying; she simply refrained from specifying which “we.”
“I can’t believe you pulled it off,” said Clarice.
“What can I say,” said Lorna.  “We figured it out.  I put the new Mindset on an hour before you got here.”  She reached out, laid a hand on Clarice’s left breast.  “I’ve been waiting a long time for this.  I know the exact year.”
Meanwhile, far away in time and space, Art Barclay was sitting at the foot of a robed storyteller, jotting down words in a strange and beautiful language he could just barely make out. 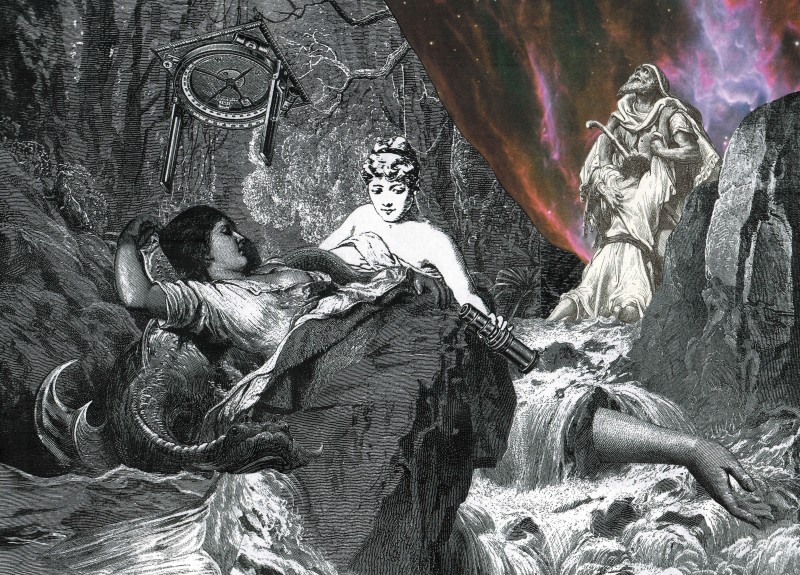 It would be decades before the rest of the world caught on: the Mindset could take one not only into the past, but into the future as well.  Not only that: it could be taught to follow the soul, not the body.  You could travel centuries in either direction; you could re-experience lives you never remembered, as a Chinese courtesan or a Corsican peasant or a Luftwaffe pilot; you could eat a freeze-dried burrito in a colony on Mars.
But Lorna and Clarice were the first.
They learned that you could remain married — to the kindly anthropologist who’d given you the children you wanted, to the handsome rich boy you married young — and, as often as you wanted, journey into the future alongside your true love.  Future-you and future-she could stare at each other, through two simultaneous pairs of eyes each, and experience what no lovers ever had before: the simultaneity of the centuries, the present knowledge of your past knowledge of the future.  The ache of your bones each time you returned?  Just a tender souvenir.
Meanwhile, one of your past selves could simultaneously journey even further into the past, to the moment when the great storyteller told all of our newborn souls the stories of our lives — and we, afraid of hearing the ending, made sure he remained silent. 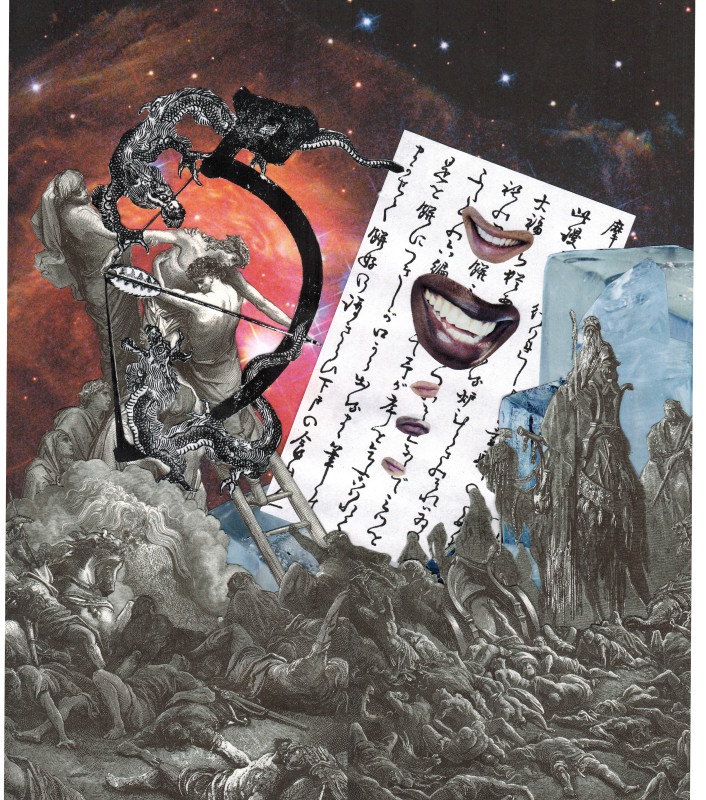 Amy Bonnaffons is a writer, editor, and educator. Her fiction has appeared in various journals. She is working on a novel and a book of stories. Her teaching practice focuses on intersections between writing and the visual arts. Originally from New York, she now lives in Athens, Georgia, where she is completing a PhD in English and Creative Writing. She is a founder of 7×7 Magazine.

Axel Wilhite is a Los Angeles-based artist. His interest in the intersection of literature, storytelling, and visual art has led to numerous cross-genre collaborations and experiments. He has shown his artwork in Paris, Amsterdam, New York, Los Angeles, and Dallas. He is a founder of 7×7 Magazine.