Thickly maneuvering into the bathroom around two a.m., you feel the floor give.

Emails, phone calls, and text messages from the governor and mayor of this territory increasingly request you and everyone stay safe, stay at home, keep your distance. Correspondingly, your metabolic rhythm has undergone a pole-swap. In seasons such as this, when uncertainty edges into form and makes contact, you’ve come to expect a week or more of debilitating intestinal obstruction. The floor yields into your bones and cycles out radiating an apprehension, ever more acute and familiar, of the general give of things, material and immaterial, which inhabit us, which we reciprocally, occupy and encounter.

Here is the perfume of a eucalyptus sprig pooling at the edge of the sink and the bluedark angling in. The sprig was a gift from a friend. You fantasize she foraged for it, knowing instead that the branch was purchased from a grocery franchise notorious for obscuring the origins of the items it sells. You live in an attic which has recently been declared unsafe and uninhabitable by a chain of municipal auditors—what kind of dwellings do they sleep in?

Somewhere between dreams with an urge to shit under the moon, you wonder,
could tonight be the night my foot plows through these one hundred year old sheets of wood
into the cavernous what of the neighbor’s room below? 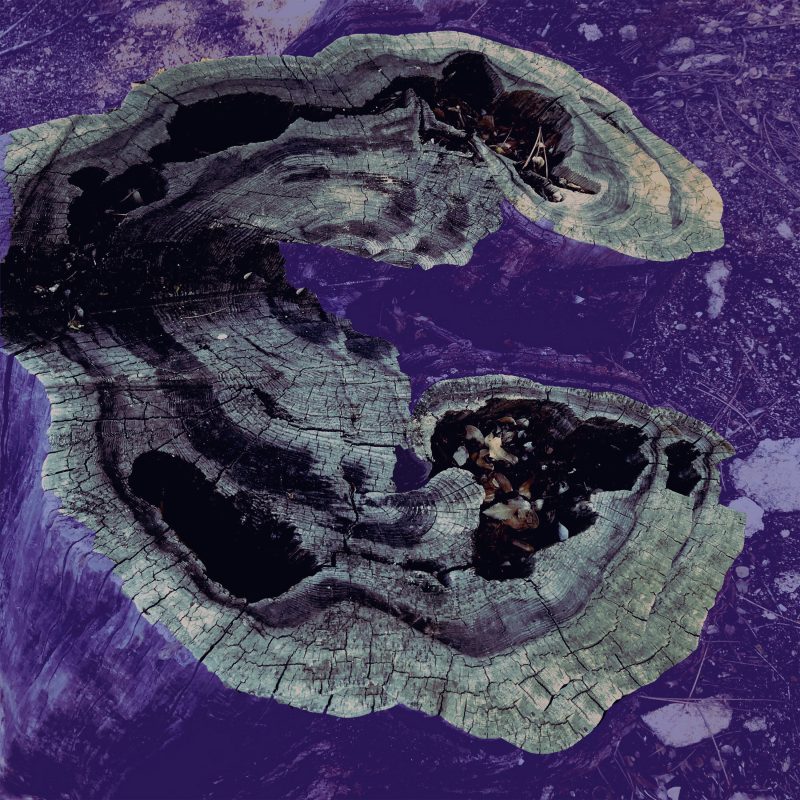 To escape the Internet earlier in the week, you meandered to the water tower to see the eagle and clip a few umbels of wild carrot. Straining your gaze through the milky bright afternoon, your fingernail traveled between your teeth, despite the virus.

We spilled over loam, the ache and ochre—

As you approached the greenbelt, a single hill, you spotted a few clusters of lavender near its base. They quivered, raising their limbs asynchronously.

When you stopped moving, the sun’s sharp diffusion blistered your mouth. How long had you been immobile, suspended mid-step, when each cluster elongated, bent and gathered up grassy clods and debris from the ground? Crackling electrically, they descended, distorting against the hill.

We spilled over loam, the ache and ochre, to trace the inverse curve. To bury you deep,
tongue, eyes, and arms first.

In the attic, tonight, when the gridded wood pierced with staples does not snap, does not initiate the collapse already thawing your calcium, your red strands—you press. Stomp, beat your foot down. Grind, powder the tree, the lace, the mushroom, the firmness— 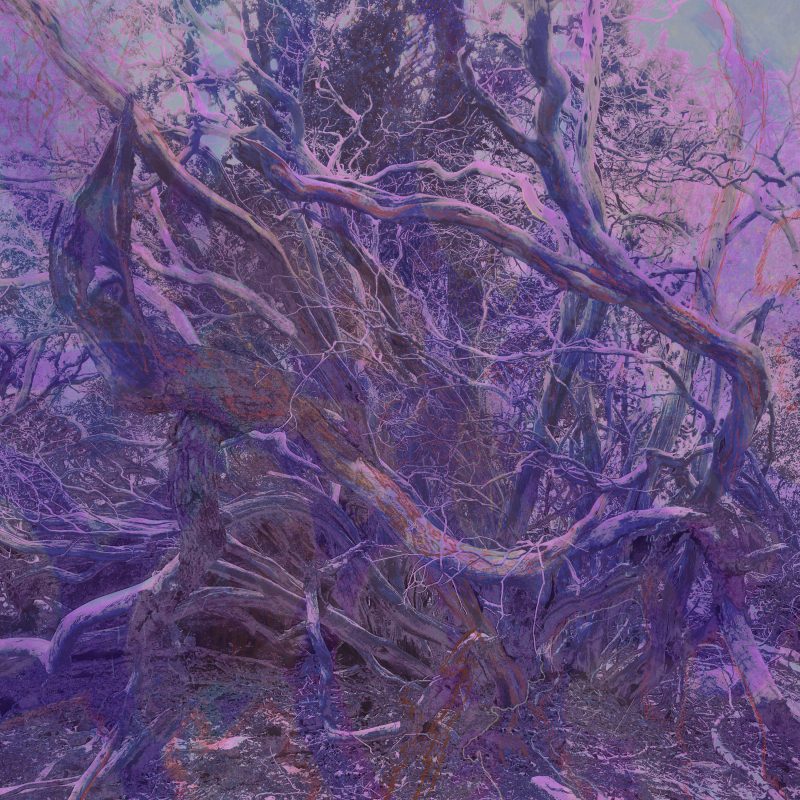 Each impact stirs something in the universe. You knock to rouse a mushroom, a trap door, a record-keeper. You thrash so fanatically that a tooth comes loose and skitters across the grey laminate, glued in by the landlord before your springtime arrival.

You stop kicking, flush the toilet, and squint at the unanticipated bone in the room, waiting for an echo or thump of bodies one level below. The tooth and its root are dry and bloodless, like a torn spider egg or old flake of icing. In the bluedark, it is too quiet for this to be your tooth.

Gather down where we burst into three, sprinkled with itch, press gently—

When the clusters erupted, a shadow passed over the hill and a fissure boomed open in the glacier. 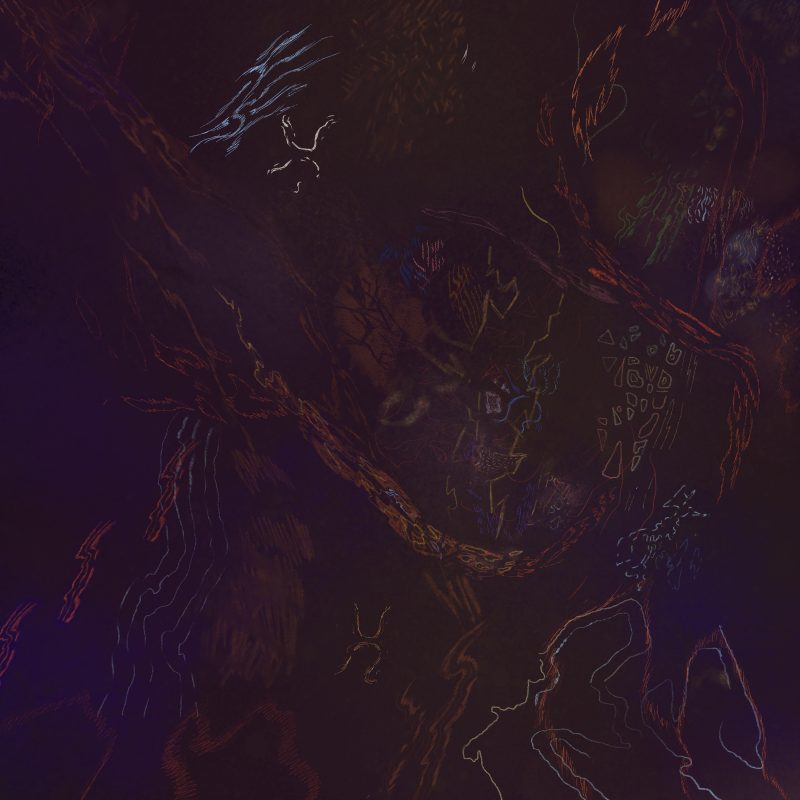 When I traced a node of the machine, you asked if I made contact—“don’t touch,” you said. But then, I put my feet on the territory, didn’t I? And opened my mouth to the birds and exhaust, the rice grains sequenced and sterilized, poured little cups of blood down the drain. The machine snips to clean the edges of our borderless mess. Meanwhile territory remains the material condition of space and sanction. I don’t need to tell you about our body marked and transected, cris-crossed by bodies within bodies; that our inflorescence is siphoned away to fund war and incarceration. When the glacier chimed, I felt the pads of our fingers touch under the veil of our assignments. Unfixed, was the message, yes—unfixed.

There we were, watching it loosen: the embankment which shepherds our grief washing past.

I made my way to this letter by tracing the sounds of sandstone tripping downhill.
I’ve enclosed, herein, what was there at the bottom of sound. 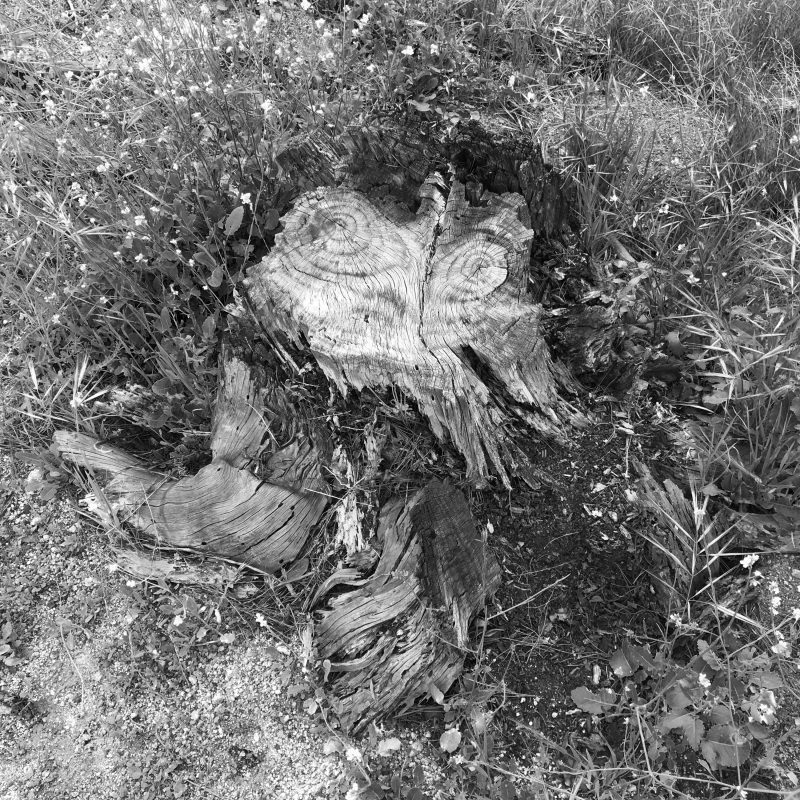 In another transmission, the Manzanita is asleep in the front seat of her truck when a gradual pulsing heat and itch agitate her awake. She needs to urinate.

Her inhale snags in the chill as she pushes open the door and creaks her body onto a gravel parking lot. She’s been camped here for several nights. Blinking about and seeing no encroachments into her privacy, she grabs the door edge for balance, pulls down her sweatpants, and arches forward into a high crouch, her arthritic knees too stiff to drop any lower. In this position, the Manzanita can’t avoid an inevitable up-splash of thick, dehydrated piss.

The stars let go of their names, so tonight she is under an arrow of pink bright ones. The mercurial, impossible-to-bridge distance between stars and stars, between stars and the Manzanita is, for her, elemental to their reciprocal alien intimacy. The sleepy river of her urine steams, knocking some late-season mosquitos off-course. To make space for limits, gaps, braidings such as this, she has decided to no longer speak aloud. It could be any night at the edge of the continent, any night along her route, as she makes her way, consulting seismic activity graphs, from one geothermal aperture to the next.

But unlike on other nights, the exhales seeping from her congeal into a vaporous, crystalline orb. She peers intently at this materialization, its fibers fluttering together. Hectares south, a falcon scrapes its talon against a dusty hide; the orb becomes too heavy to stay afloat. Aiy! It drops, breaking roughly over gravel. Recoiling, the Manzanita loses balance and slumps against the truck, as speckles of fractured orb seize like a pox onto her shoes and pants bunched at the ankles. 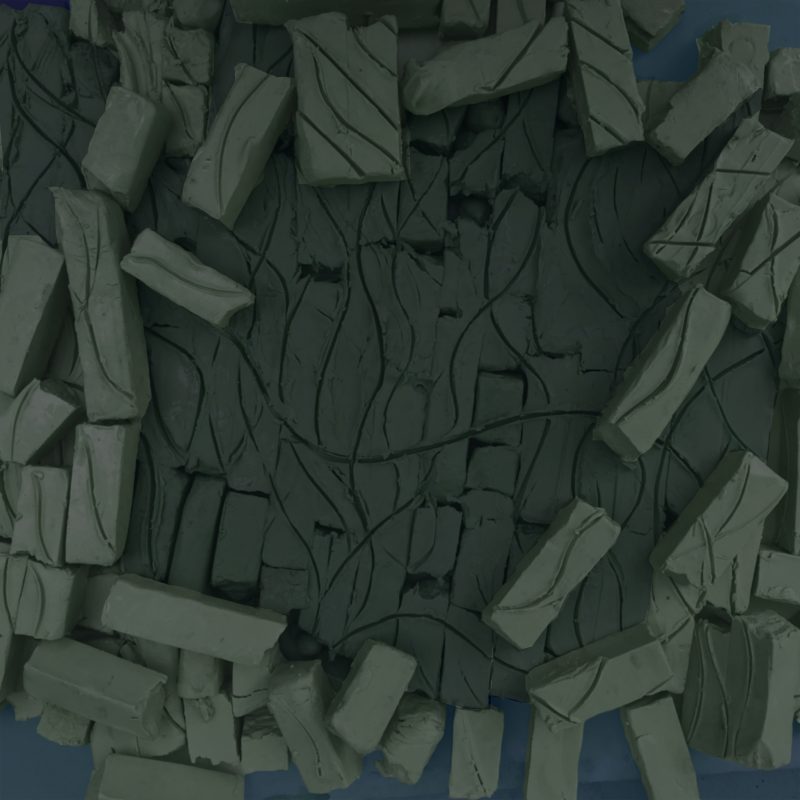 Unable to pinpoint with thumbs or tongue the gap in your jaw where a tooth could have fallen from, you roll onto your back, exhausted and emptied of intention. The house full of tenants, from attic to crawl-space, is placid.

There is the geologic mass, and there is where it lives inside us:

a cut of fabric turned inside out,
a spring monsoon cutting runnels through the organism, submerging
footprints dried into the hard-tac and measured later, in millimeters—
in the dream that approaches,
a cold scatter worm. 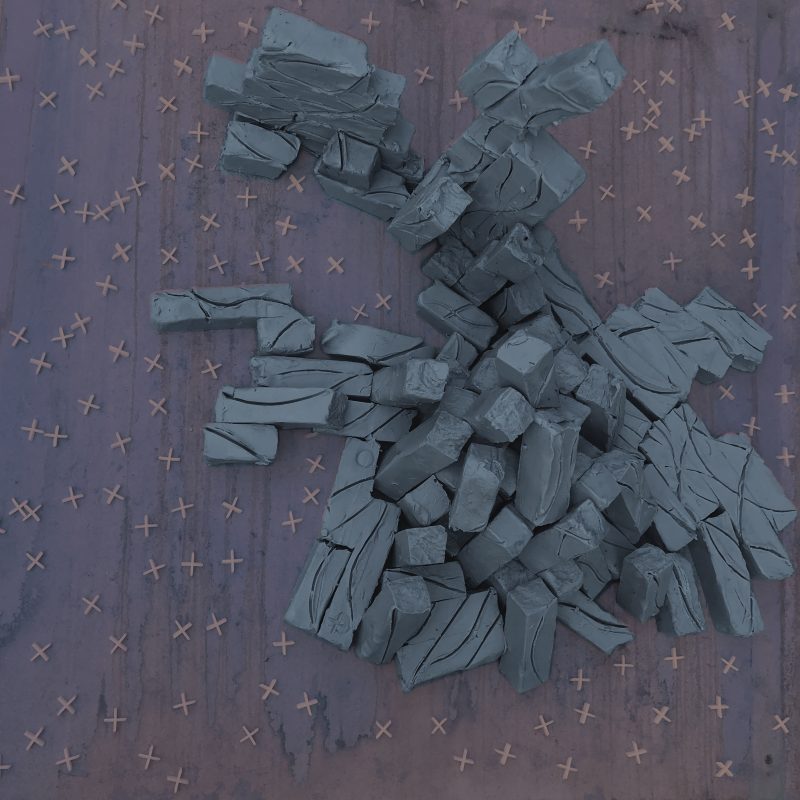 If I do not light a fire, wave it out, tremble in its smoke, I will stay upright in my misapprehension, neglect your system rolling low from the west. I will neglect
to rinse my feet at the entrance.

Evening was bearing down when I received your letter. Vital sounds, the insects, have been drowned out by a designer, chemical quiet. We’re meant to read peace in the stillness, but how can I? What will reach for me in this erasure, beyond erasure, when I hold out my hands?

From a scraping glacial migration, a spore
unfixed knits a fungal web between an eagle’s feathers—

As the earth tugs away from its bone, unlocking
gap and lattice

A spore is released,
is a tooth undiscovered at the demolition site
in the tangle of these portals set loose into space.

Within you, beside you nodding,
Unfixed, was the message we heard, yes, unfixed—

Here is the boundary layer, and here
is the body we bridge. 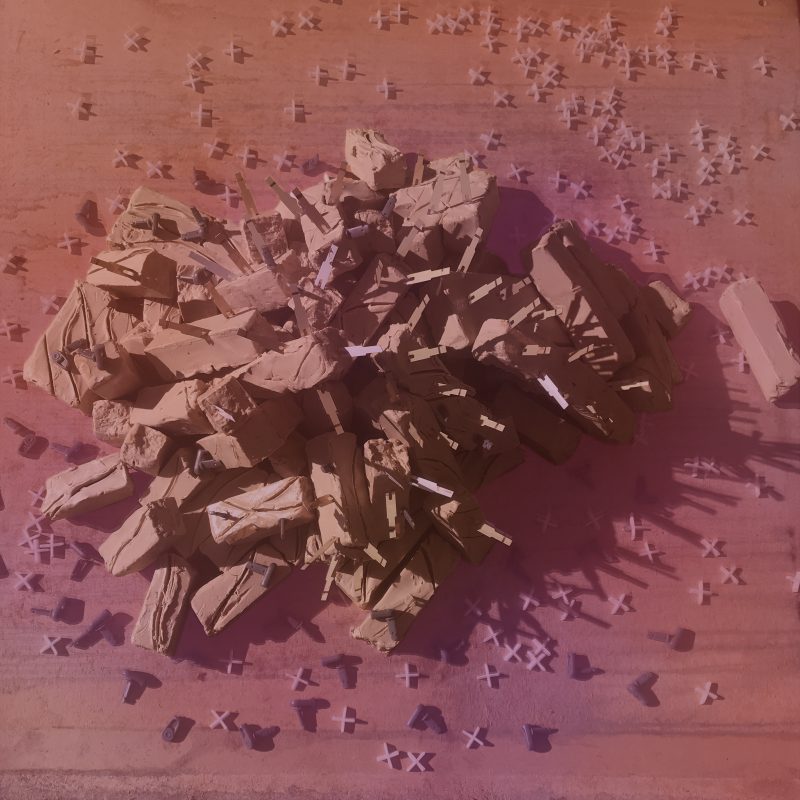