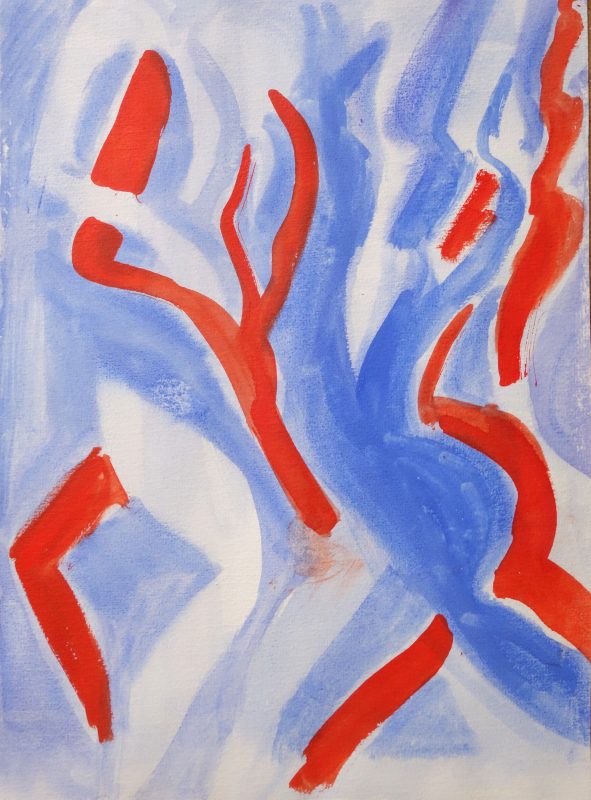 Pregnant with possibility, with child and dread, Bleu sat on her swollen rump in the forest and watched the setting sun cast fiery rays among the branches. An ant crawled along her calf and she flicked it away. Ever since she was a child, she’d feared insects crawling into her crevices. A recurring childhood nightmare involved sitting down to pee and discovering an army of ants marching out of her. But now that a more miniscule insect-like thing had swum inside her and created something that kicked and shoved her bladder with such force, the six-legged smushable life-forms held no power over her.

Bleu had nowhere to go. She had a past, but she wanted no part in it. She couldn’t keep its language out of her mouth or its images out of her mind, but she could damn well refuse to tell anyone about it. To find a place to stay, she’d need to convince—people, organizations, clipboard check boxes, uniforms. She didn’t want to.

So she sat in the forest, and the sun set, and it grew colder. Her ass was numb and she imagined her entire body becoming pins and needles as she sank into the bark of the tree trunk she leaned against. She wished for the branches, so recently aflame with violent light, to curl around her stricken form and contain her. She could be rewombed by it, cradled in it. Her own belly could stop in its tracks. They could be a nested doll, infant in woman in oak.

Chiming bells woke her from her sleep. The nearby church was announcing mass. She had slept the night through.

Bleu still had nowhere to go. 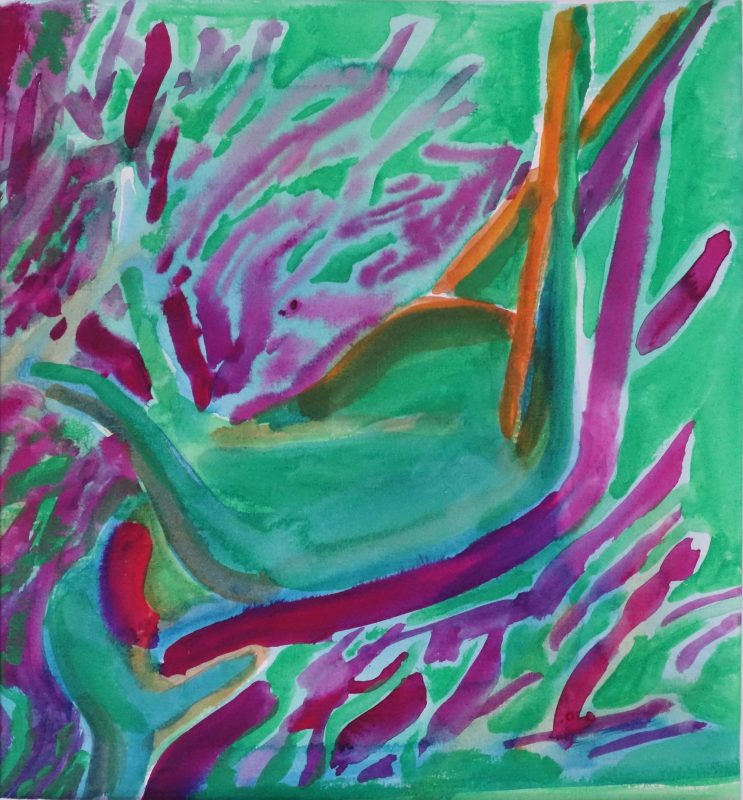 Even before she’d discovered the parasite, she’d known what she’d name him. If he was a him. She’d name him Vert. Verte if she was a she. Vertes if they were neither, or both. But that was an idle plan, dreamt up in a long lost carefree time. Now an actual growing fetus was consuming what she was, hungering as she did, thirsting for the same water she needed for her parched throat. And she no longer knew if the name would be apt. Over the last hours of fitful sleep and trudging in the direction of unseen bells, she’d grown sick of natural colors in the forest, aching for gunmetal grays, the toxic orange of waste, the shimmering rainbow of oil. The colors of a destructive humanity.

The doors of the church were as brown as the trees she’d emerged from, but at least the brick around it was its own unique burgundy, divorced from pure nature. She knocked. With no response, no whisper of movement inside, she entered.

Dreams often start this way, with nonsensical images, beauty indescribable yet vivid enough to call to the unconscious mind and keep it lulled. In this dream that wasn’t, Bleu held her belly instinctively and surrendered her nose to the thick scent of death as she walked into a roomful of orchids.

The church was no church. It had no ceiling. It was an empty frame with an apparently working bell tower at the far end. In between the door and the tower was a greenhouse, its door open. The humid warmth worked its way into Bleu’s hair, slipped between her fingers and the delicate folds in the back of her neck. The smell barely bothered her. After all, it was familiar. 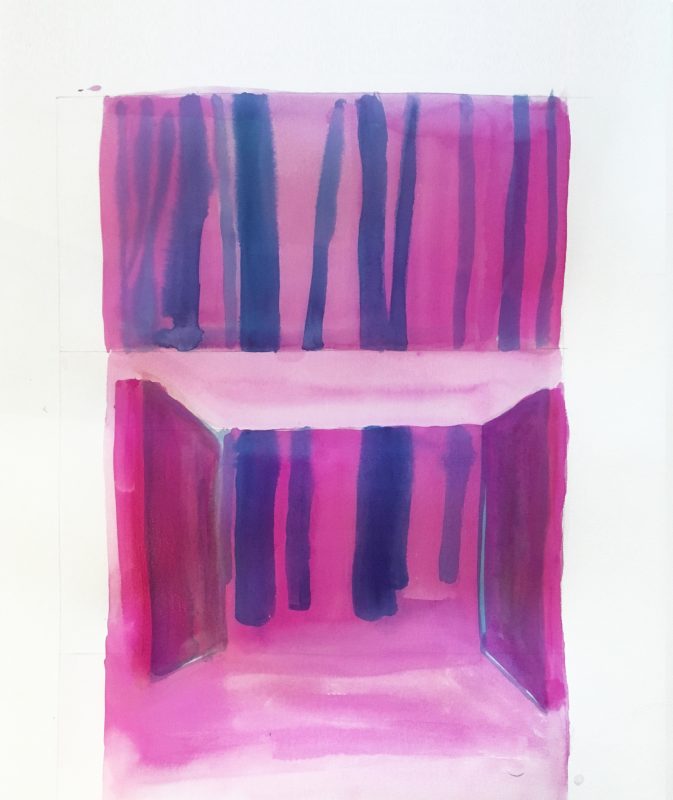 Fairytales do away with time. When the princess sleeps for one hundred years, it only takes a full stop and another word to keep going:

…and the princess slept for one hundred years. Then—

Bleu stayed at the orchid farm for what felt like eons. There was no one else there when she entered, and she never found another soul. There was only her, and she slipped into the role of groundskeeper, gardener, waterer of orchids, puller of weeds, destroyer of pests if dangerous and leaver-alone of the ones that weren’t. Perhaps there had been someone else here before her who had assumed these roles, but when she entered, they must have been released from their bondage and run off, grateful for their freedom.

And still, the child sat inside her, caged by her body as she was by the church that wasn’t. Some nights, she would climb the bell tower, whose mechanism she didn’t understand but which worked quite smoothly without her interference. She would look out the window at the top and see the forest she’d come from stretching on and on. It was the only view of the outside world—the stained-glass windows of the church were too rippled to see anything through.

She stayed, and she stayed, and she stayed. Something kept her from opening the door and emerging. The smell of rotting roadkill emitted by the orchids became indistinguishable from any other scent. She thought that, if her child arrived while she was still there, it would be well-equipped to handle the world at large. After all, it would be entering into the flowery contradiction of Bleu’s narrowed existence.

This is where time becomes a problem. Bleu stayed. Day after day. For a long, long time. And then— 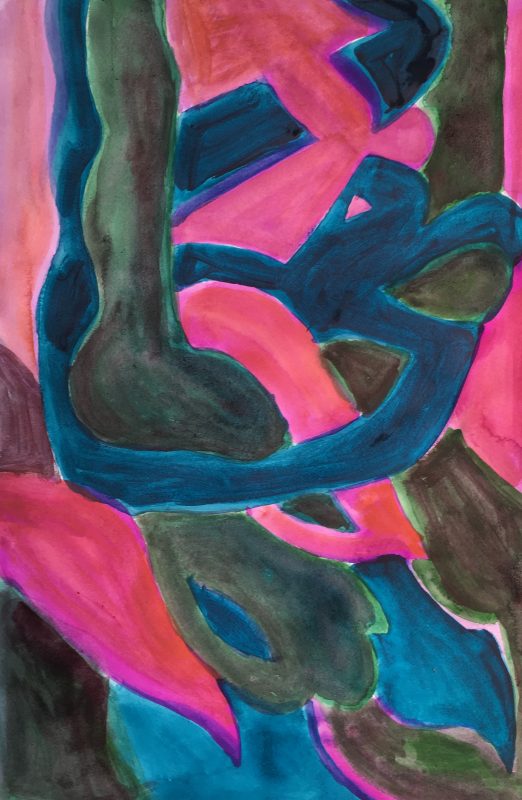 But before Bleu—everyone has a before, and an after too—there were other people. Other stories. There was her mother, a woman with a soft voice and a presence that could terrify small children and impress adults. There was her father, a man Bleu never met, and the step-father, who had been born far away, with a different mother tongue, who worked hard and learned a new language and fell in love and stayed with Bleu and her mother.

And before Bleu watching over the orchids, there was Yehoshua, a slender man with plump lips and a patch of skin on one cheek that never grew any hair, an irregularity that left him deeply self-conscious and eternally cleanshaven. He had stumbled into the church one night, wishing to call his God upon him, to ask his God to smite him for entering a church, an idol-worshipping place. Instead, he’d discovered the carrion smell and the infinite shades of purple. His anger at his God subsided in time, and a deep peace invaded his very veins, until he became sluggish and slow, tired. Until he lay down in the soil one day, and allowed himself to be consumed by it, bit by bit, wondering all the time whether this was a natural death or his God finally smiting him, never considering the possibility that it could be neither.

And after Bleu, well, someone else will show up.

Bleu remembered and imagined a million stories during her time in the church. She told her stone child—for it had stopped kicking some time ago and grown still and warm, pulsing gently—as many stories as she thought up, and she began to yearn for the after to come a little bit quicker. She missed the air. 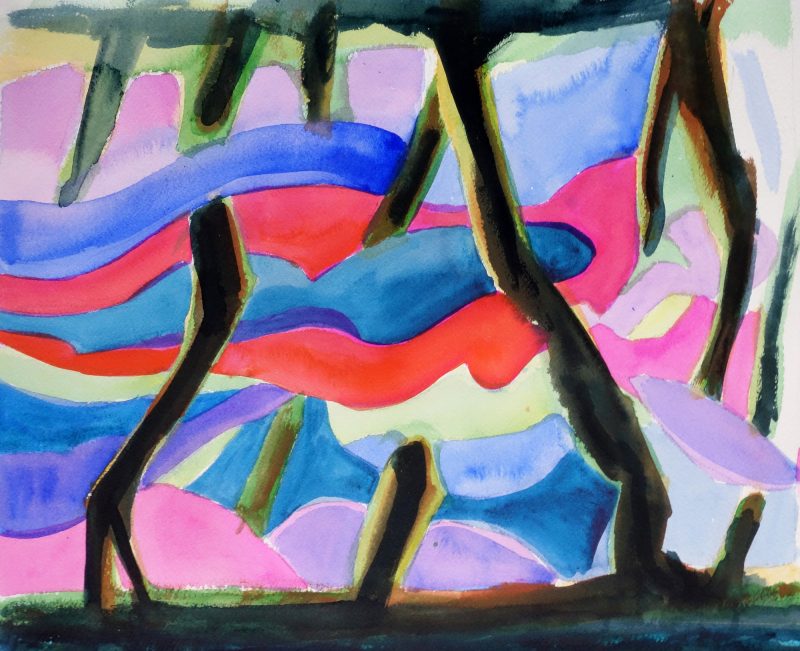 On the morning of Bleu’s last day in the church, she woke up in the mossy patch near the confessional that had become her bed and ran her hands over the taut skin of her belly. The child had been shrinking slightly, slowly, and her stomach with it. She thought that it too yearned for air. Most living things, she was pretty sure, withered without it.

It wasn’t until she’d stepped outside and placed her hand on a young tree growing in the middle of the path that she realized what she’d done or where she was. She’d broken free, though it wasn’t through any conscious thought or careful decision making. Bleu was not prone to care, and her thoughts ran together, for the most part, consumed by daily practicalities, the upkeep of the orchids. When had she plotted her escape?

The day was bright, most likely spring, or perhaps late summer. She had lost track of the seasons. But she knew enough, still, to look ahead, not back. There are stories about those who look back. They lose their beloveds; they turn into stone or salt; they are stuck on the couches of psychoanalysts. There are worse fates, Bleu knew, but still, she didn’t want her own story to end in permanent stasis.

Walking felt good. She thwacked into low-hanging tree branches, the pain of the physical world bracing. She scrambled her way through the underbrush, collecting scratches, bruises, and trickles of blood as if they were butterfly kisses. A double heartbeat pounded in her ears, one familiar and one chasing its way into life.

She didn’t stop when the sun began to set. She walked towards the watercolor sky, and watched the bats begin to flutter out of their treetop or cavernous homes, blind and brilliant. 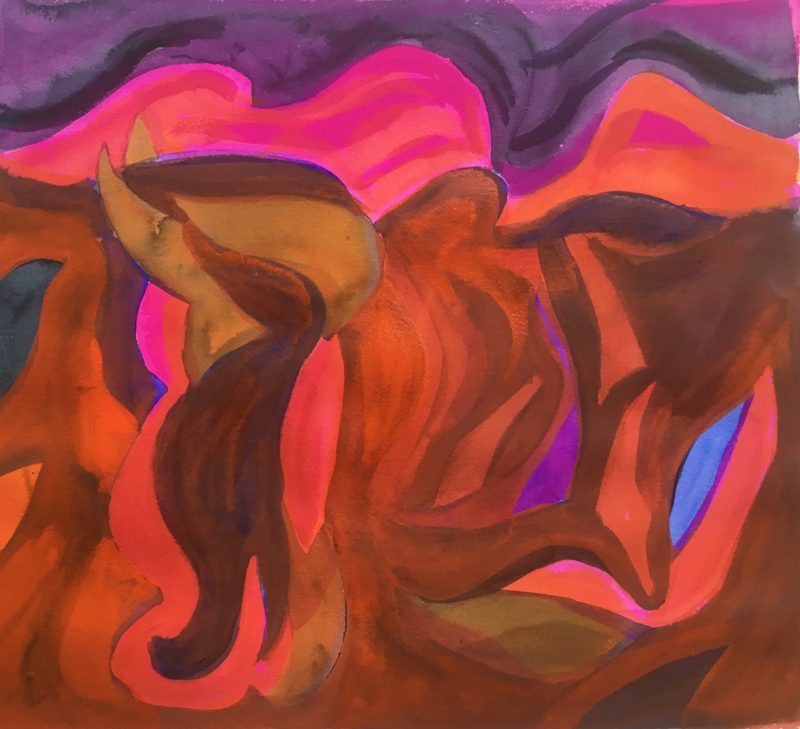 In the deep dark of night, Bleu’s eyes adjusted, and her innards began to spasm. In a moonlit clearing, she sat, clutching her swollen self. Waiting. She didn’t know for what.

At this point in a story involving a pregnancy, a child must be born. Alive or dead, it must come out somehow. The allotted amount of time had long passed, and a part of Bleu that clung to the strict guidelines of a reality she no longer fit in knew something was wrong. Because no person can endure a years-long gestation. No person can live on air and weeds and the sound of bells.

If she let her mind dwell in this, the land of impossibilities, Bleu was pretty sure she would die. There were few things she wanted, but life was one of them. Strange as it was, the past that had hurt her so had not stripped this simple desire from her. And so she let her hips settle, allowed her legs to splay.

A moan more powerful than her body was capable of nevertheless escaped her throat. Deep and earthshattering, it called out. Bodies surrounded her in the soft light of refracted sun, and her eyes shut tight, unwilling to see the horned and furred bodies, the clawed paw pads and sleek underbellies. But she could hear them, the rustling and huffing, the snuffling of snouts as they gathered round, urging her on. Velvety tails wiped sweat from her brow, muscled bodies allowed her to clutch them.

Until, finally, out it came, in a rush of blood and fury. 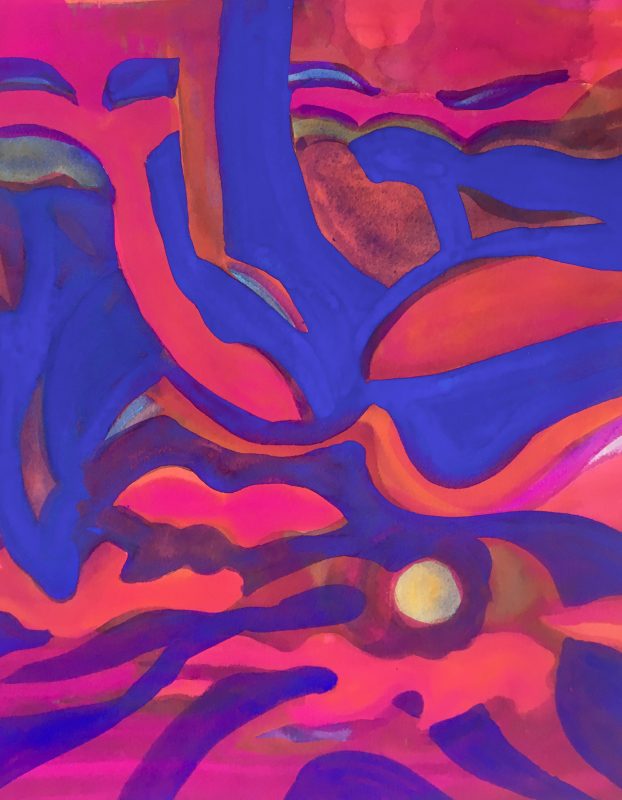 Hello. I have been carrying you for a long time, Bleu said. I know, she said.

I love you, Bleu said. Do you? she said. You have a lousy way of showing it.

What next? Bleu asked. Whatever we want, she said.

The clearing was empty of anyone but Bleu, and as the sun rose in a sky as bloody as her fingernails, she considered a return. To where, to what, she wasn’t certain.

But she was no longer alone.

Ilana Masad is a fiction writer and book critic whose work has appeared in The New York Times, The New Yorker, McSweeney’s, Joyland Fiction, StoryQuarterly, The Washington Post, NPR, and more. She is the founder and host of The Other Stories, a podcast featuring new, emerging, and established fiction writers. She is currently a doctoral student at the University of Nebraska-Lincoln.