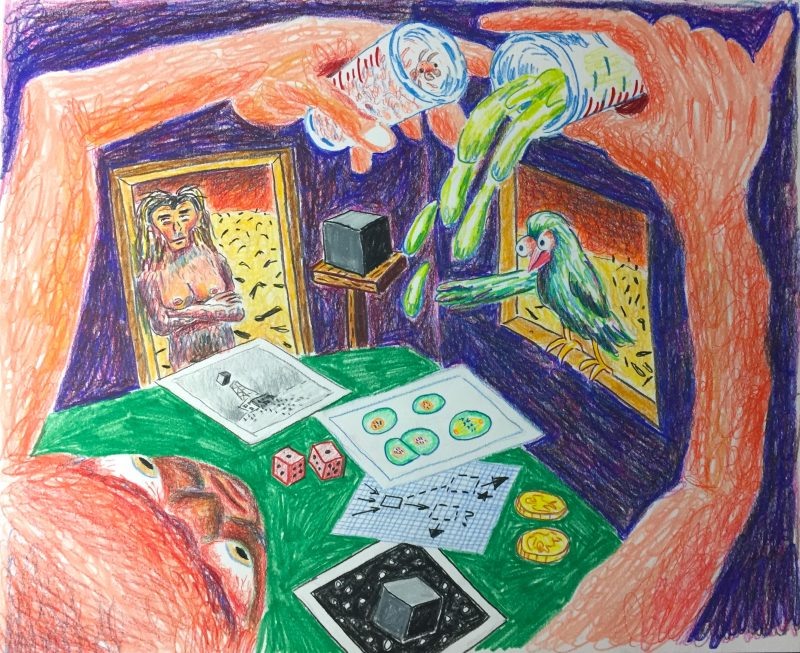 According to my dad, a silent parrot determines our evolution. He told me this shortly after he confessed that Santa wasn’t real. I was four, helping him staple Christmas lights around the front door of his then-girlfriend’s apartment. My dad, honest to a fault, was trying to explain to me the myth of trickle-down economics by using the capitalist mutation of Jesus as his case in point. Realizing that he’d made a significant parenting boo-boo, he related what he deemed the great secret: a parrot guides our fate.

About a decade later, upon returning to his then-wife’s house very stoned, my dad explained his theory in greater detail. I assumed he was fucking with my high. But I listened anyway, mostly because it was just us. Mary, my former stepmom and her twin daughters were off at some bullshit equestrian competition, and her big house, usually echoing with their chatter, was now empty of movement and noise, except for my dad sipping his scotch in the dark.

I sat beside him on the vast leather couch, and, without warning, he began to describe the parrot and the man and the cube. The parrot pointing to the dice and the coins. The man, also mute, rolling and flipping them to decide which cells would divide, which species would grow thumbs, would grow wings, would disappear. The faceless cube floating inside the parrot’s dreams. The man slaving to build it, a perfect mechanism of chance, to relieve them of their awful duty. Not once did my dad say metaphor.

When he finished, we ordered pizza and watched the Lakers lose. 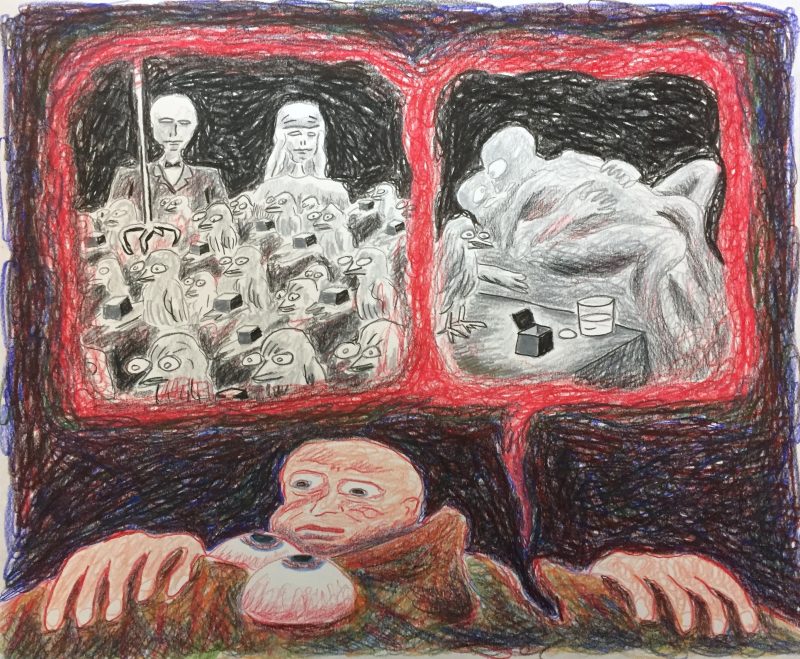 According to the ghost of my biological mother, evolution is no big deal.

She was tough and beautiful, from Guatemala City. I was in third grade when she died in a sad motel off PCH in Wilmington—you know the story already.

It’s in that motel room that I sometimes meet her in my dreams, the TV vomiting a rerun of Family Matters, its blue light shining through her body, which makes no shadows on a wall that shudders like a smoker’s lung.

Not long after my dad explained to me his parrot theory, I asked her if he’d ever mentioned it.

She didn’t look away from the TV, but she nodded. She never looked at me in these dreams, even though I always assured her that I loved her and forgave her, and that I meant it.

Still, she wouldn’t meet my eyes, even when I sat with my back against the television. But at least she would begin to talk if I blocked the light from invading what remained of her.

Your dad was talking that parrot shit the day we got married, she said, how everybody’s born with a parrot who rolls a dice and makes us do things. I told myself, Beatriz, you marrying a crazy guy, but he a good guy. So I told him, you stop this crazy talk, and he said ok.

I asked her if he ever mentioned it again.

Hmmm, I think one time. We were, you know, doing things when you were a baby, and he was telling me again about this parrot, and evolution, and I was telling him, sho pisado, not now.

But what do think, mamá? I said. About evolution?

Nada entonces algo. Nothing then something. That’s it. 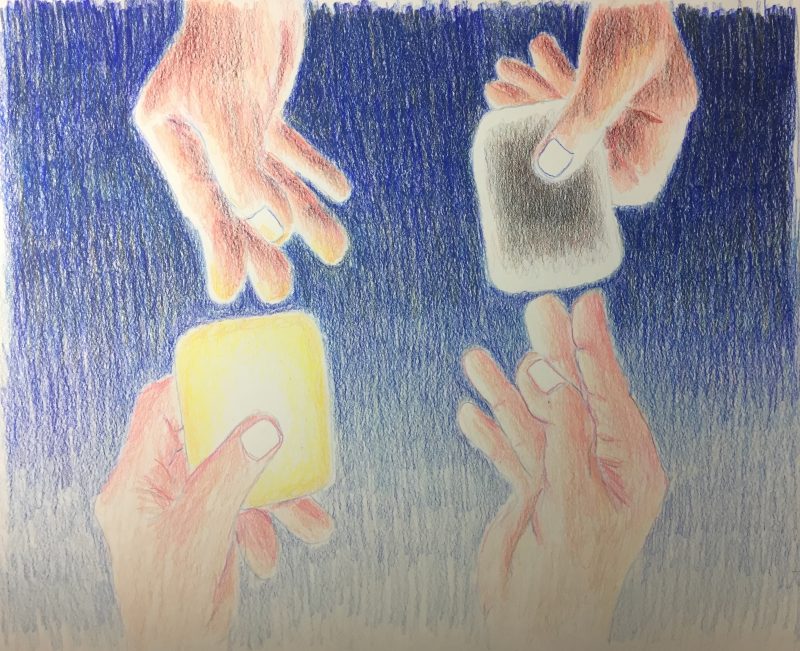 According to the man I met on a Greyhound near Medford, Oregon, a tall guy in cutoff jeans and a tank top featuring several scowling parrots, a guy whose name I don’t remember, but who I remember, after he sat beside me, told me he was from Aberdeen, Washington, and, when I mentioned Nirvana, he replied, with childlike enthusiasm, that he was Kurt Cobain’s cousin, pulling up his jorts to reveal a tattoo of Cobain’s face that covered his right thigh in sooty jailhouse ink, Cobain looking alarmingly peaceful, like a long-haired Buddha about to overdose on his acceptance of suffering, the man, who had been stranded on the highway by his soon-to-be wife, apparently because she’d turned to him suddenly and claimed he was a stranger, not the man she loved, leaving him to thumb for a ride, which happened to come from our kind-hearted driver, who, technically wasn’t allowed to pick up hitchhikers, but he was nearing retirement and no longer gave a poop, the driver’s words, the man told me, scratching at his knees, then admitting, the sex is worth the bullshit, before asking how I thought the universe began, which made wonder if he was making a non-sequitur joke, but before I could say Big Bang, he started in on a spiel about evolution, which he claimed has neither an end nor a beginning, and is a single, continuous thought, perhaps in God’s mind, perhaps not, that pushes forward relentlessly, like time, without the luxury of reflection, passing ideas back and forth, like light and dark currency, spawning dinosaurs, black holes, and VCRs, he said, before asking me for a couple bucks. 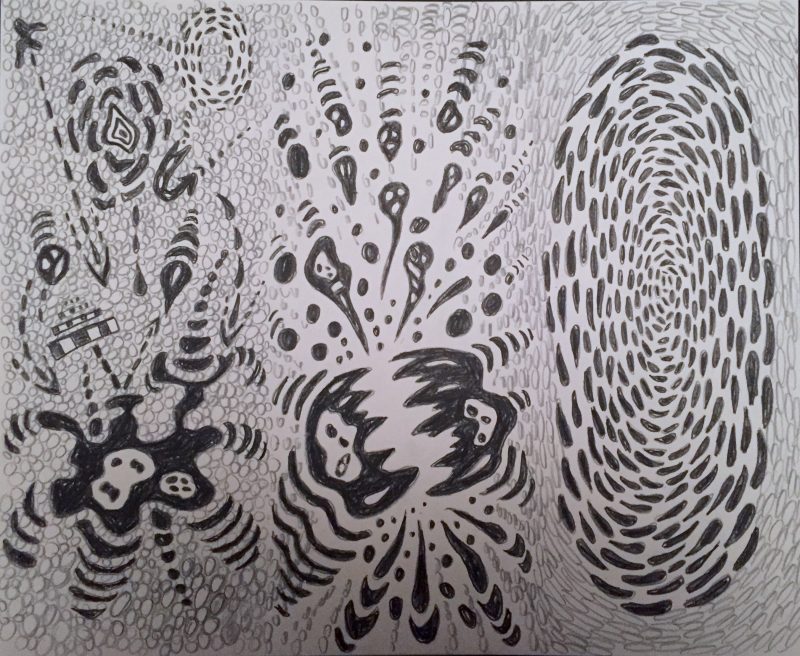 According to his faculty bio on the university website, my father-in-law specializes in science teacher education, focusing on nature of science issues with specific emphasis on the instructional role of science theories (specifically evolution education).

Shortly after I began dating my wife, I met him and my mother-in-law for Thanksgiving dinner. They lived on the wooded outskirts of Tallahassee, about a two-and-a-half hour drive from Gainesville, where we were living then. On the way, my wife hit an owl. She pulled off the highway, sobbing, and, instinctively, I extracted its limp body from the grill of her Prius, wrapping its wings around itself before swaddling it in a blue beach towel. Later she would tell me that, watching me hold this unlucky bird for the rest of the ride, as if it were my own child, was the first time she considered getting married again after her difficult divorce.

Before we ate, my father-in-law helped me dig a grave in the backyard. In the evening light passing between the live oaks, the owl’s eyes seemed to glow.

My father-in-law ran his finger over its talons, then its beak, remarking how incredible it was that, out of all the potential pathways of natural selection, this great-horned owl was the only North American bird of prey capable of capturing and then flying with animals that weighed as much as itself, that there was no such thing as random processes when it came to evolution, that patterns will always emerge within chaos as a consequence of constraints, like air pressure and the Earth’s distance from the sun, which limit the choices that determine the direction of inevitable growth.

Then he was quiet, as we finished the hole, which, now in the dark, looked more like a door. 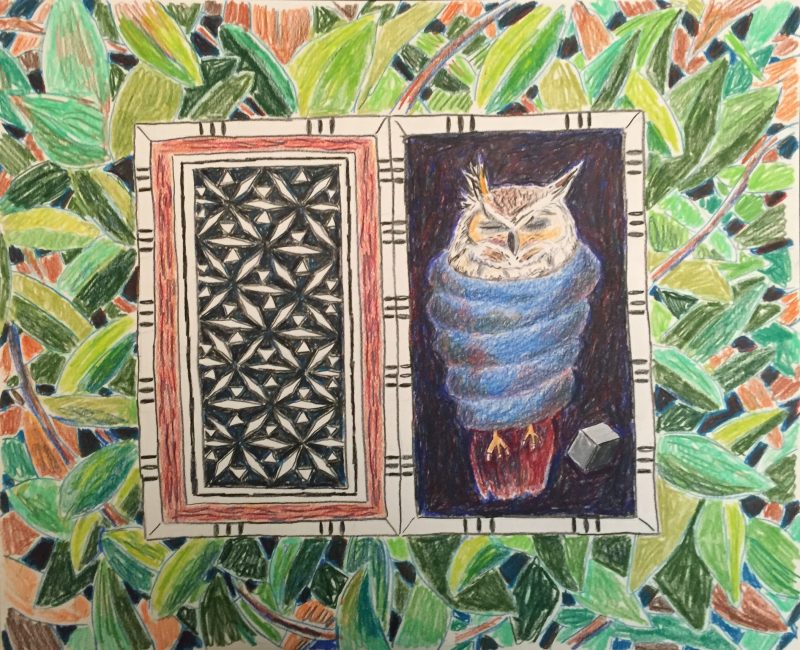 According to Eunice, my wife’s friend, soccer teammate, and occasional psychic, evolution is a garden in the brain of an Infinite Intelligence.

Eunice admitted to my wife—she rarely spoke to me—that she borrowed garden in the brain from an Emily Dickinson poem. And Infinite Intelligence is the accepted term for God by the National Spiritualist Association of Churches, of which she’d been a member when she lived in Cassadaga, nicknamed the Psychic Capital of the World, an unincorporated community established in 1875 by a New Yorker, who’d claimed a ghost of the Seneca tribe had led him through the Central Florida swamps to a cypress-circled clearing that he’d dedicated to light, love, and speaking with the dead.

Before we got married, Eunice offered my wife a free tarot-card reading. Juice, their soccer team, had just won Gainesville’s summer championship, and Eunice was feeling generous. (Though not generous enough to also read my cards, as she claimed our energies were incompatible.) I told Eunice it was good to see her, and she ordered me out of my apartment to cleanse it in accordance with the Law of Vibration.

Though I have no proof—Eunice forbid my wife to take photos—my wife claimed that Eunice drew a card that shocked her. When she flipped it, there was the lifeless, swaddled owl that had convinced my wife to give our relationship a chance. When my wife said this, Eunice nodded and told her that, even though she really didn’t like me, we were right for each other.

Eunice also said that I should keep trying to talk to my mom, that I would know what she meant. 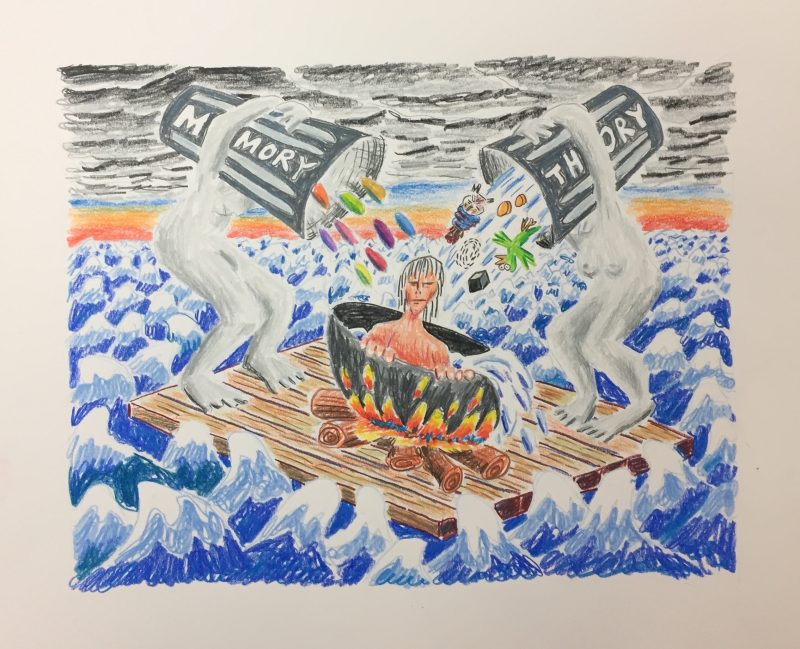 According to my older sister, evolution is a just fancy word for surviving.

She was much smarter than me to begin with, and then she went to prison and read everything. I told her, right after she moved in with me, my wife, and my daughter, who was still an infant, that I kind of envied all that time—almost four years—she’d had to spend with books.

My sister shrugged then described how every afternoon, at ten minutes to three, she would wheel around the shitty cement courtyard a quadriplegic named Asia, shot by a cop while robbing a pharmacy, who, without fail, once they exited the cell block, would take a deep breath, exhale, and thank my sister for rolling her fat ass, and they would laugh and talk mostly about nothing, but sometimes, one of the losses they’d accumulated would enter their conversations, and they would examine it briefly, until Asia said oh well, and some of my sister’s rage, most of it justified, would begin to thaw and run off, so to speak, filling the courtyard with the once dark and frozen water that had occupied her, and she would not so much imagine as sense herself becoming lighter as this formerly hidden water, now draining quickly, began to form a kind of ocean around them from which Asia’s wheelchair served as a life raft to keep them both afloat.

Then, after a longish pause, my sister said, I envy Asia.

According to my mom’s younger ghost self, evolution is a mysterious momentum.

She told me this two weeks ago, after I asked her to explain what she’d meant by Nothing then something. It’d been years since I’d returned to the motel where she remained exiled in my dream mind. And there she was: obsessively refolding ratty towels on the sagging mattress, clearly tweaking, not yet twenty and already tired. Soon she would be pregnant with me.

She looked at my hands—still refusing to meet my eyes—and tried to hold them. The TV was off. The only sound was water rushing into a tub.

My mom followed me into the bathroom. We watched the water rise quickly above the tub’s fiberglass body and spill onto the greasy tiles.

Then my mom, with the water now waist high, said something curious in Latin: omne quod movetur ab alio movetur. Like her, I’d also studied it in Catholic school, and I remembered the English translation—whatever is moved is moved by something else—and my theology teacher, Father O’Brien, who one afternoon I once got very drunk with, played ping pong, and discussed Aristotle’s and Aquinas’ conceptions of what began that first movement: the Unmoved Mover and God respectively.

Now completely underwater, my mom began to walk into a liquid doorway that had opened in the wall. I followed her, and together, we trudged backwards in time, suspended over robots, and people, and ants.

Each successive night I’ve returned to this tunnel, my mom still attempting to hold my hand, while we walk slowly towards a hypothetical beginning, which may finally force her to look at me, her future, and see herself in the eyes of the man I’ve failed to become.

Steven Gavenas is an artist living in South Pasadena, California. He creates drawings and paintings that expressively illustrate his impressions, theories, and what he sees around him. He is heavily influenced by his experiences as a businessman, consultant, fisherman, refugee worker, undertaker and economist, and his travels and work around the world. He got his BFA at the Corcoran College in D.C. and his MFA at Art Center in Pasadena.