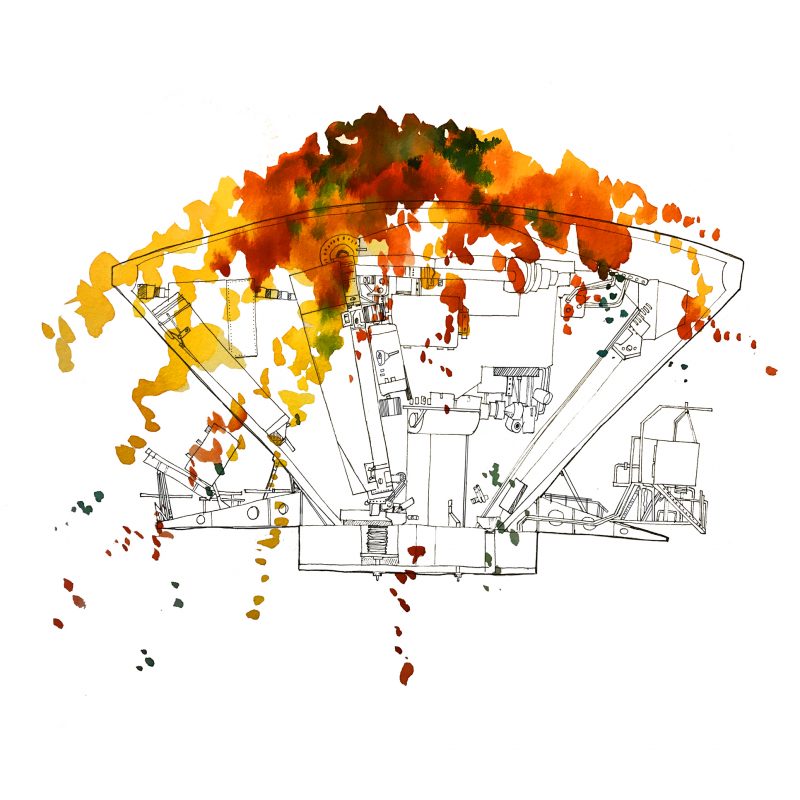 She keeps walking at quick pace while struggling to open the letter she just picked directly from the postman, whose electrical bicycle she almost crashed into on her way out of the flat. A new job and it’s already the third time she arrives late. You’re not making your life easier, dear little girl. It’s a world of suits and ties. She fumbles with the envelope one-handed, the other holding the take-away cup of coffee that she bought at the bar down the street, as she does every morning. The coffee is expensive and not even good, but damn, that Chris, he’s hot. She blushes and immediately kicks the thought out of her mind, feeling guilty for what? It’s Tom who decided to leave. Using her little finger, she tears the envelope in two and reaches for the sheet of paper folded inside. No message, no signature, no date, no address. Only a drawing of a power station––her drawing, the one she sketched just a few days earlier as her first job assignment. What the f…? All those splashes of color. She didn’t make them. It looks like the paint has just been laid, the paper still a bit wet. Next stop, Grant Street. Grant Street?! She rushes out the subway doors already beeping and closing.

The air stinks of rotten eggs and sulfur. There’s nobody around and, even in full daylight the air is hazy with heavy gray dust that gushes from colossal chimneys. Tom has been on the road for many hours and he starts to feel tired and hungry. He finds a soft spot of grass, How can plants even grow, here?, he casts a quick look behind his back to double-check he’s alone and sits down for a short break. Long sigh, the shoulders are sore from the weight of the rucksack. Root beer and Salt & Vinegar crisps. The sweetness of the drink clashes with the sour taste of the chips in his mouth. He smiles. He used to hate root beer before meeting her. It feels like ages ago. But he didn’t come all the way out there to get lost in romance, anyway. He licks his oily fingers and sips the last of the soda. Following an instinct, he takes his satellite phone out of the backpack’s front pocket and inputs the security code, but the device doesn’t respond and the screen remains completely black. Still no bloody signal. No time for rest, either. He puts the phone away and aims straight towards the smoky chimneys. 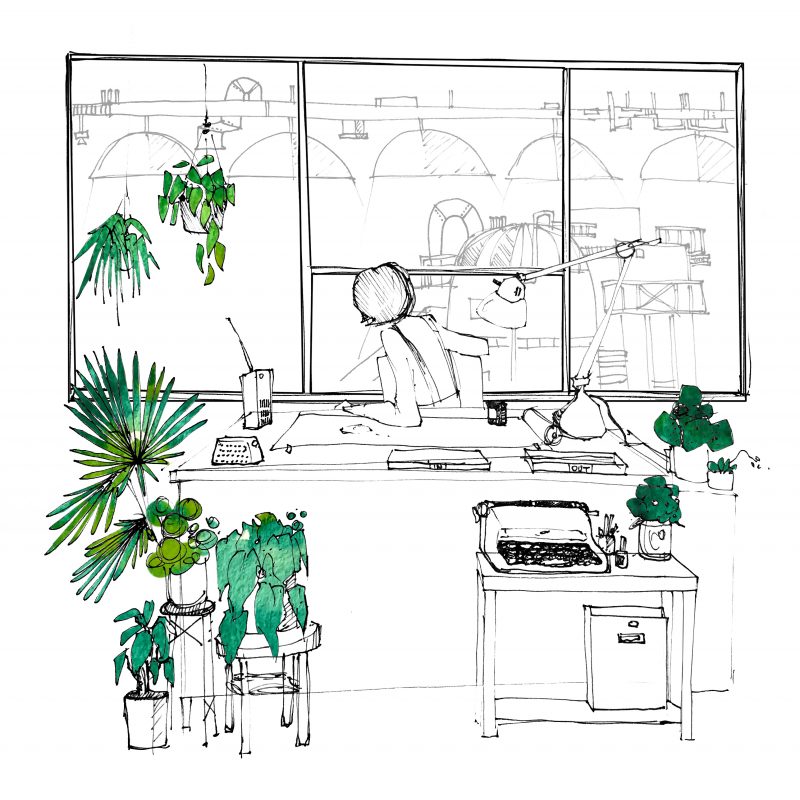 She hates not being able to say no, she hates late evening job, especially that kind of job, she hates when she’s the only one in the office, she hates the delivery food from the vegan bistro which all the others seem to appreciate so much, she hates all the creepy mechanical noises that make her paranoid. Her heart jumps every second minute and she can’t help herself turning towards the large window overlooking the big engines to check that everything’s at its place. The first time she saw that huge room, she was stunned. Who could imagine that in the elegant liberty building in the heart of the city lies such a gigantic mechanical structure? Everything is so secret, here. Private guards, metal detector, wireless badge, and facial recognition at the entrance. Encrypted emails. The very few paper documents flying around the various departments are collected and destroyed every four hours. She doesn’t even know precisely what she draws when she’s at work: she strictly follows a list of very detailed instructions she receives every morning via the intranet. She can’t figure out how that drawing could pass the company’s iron-curtain-kinda security system without being noticed, and get into her mailbox. She’s been thinking about it the whole day. If they get to know this, I’m screwed. Suddenly, a low muffled thud. No pathetic fantasies: this time is for real. The blood freezes in her veins, she turns off her table lamp on impulse. Great idea, now she’s alone in pitch black. 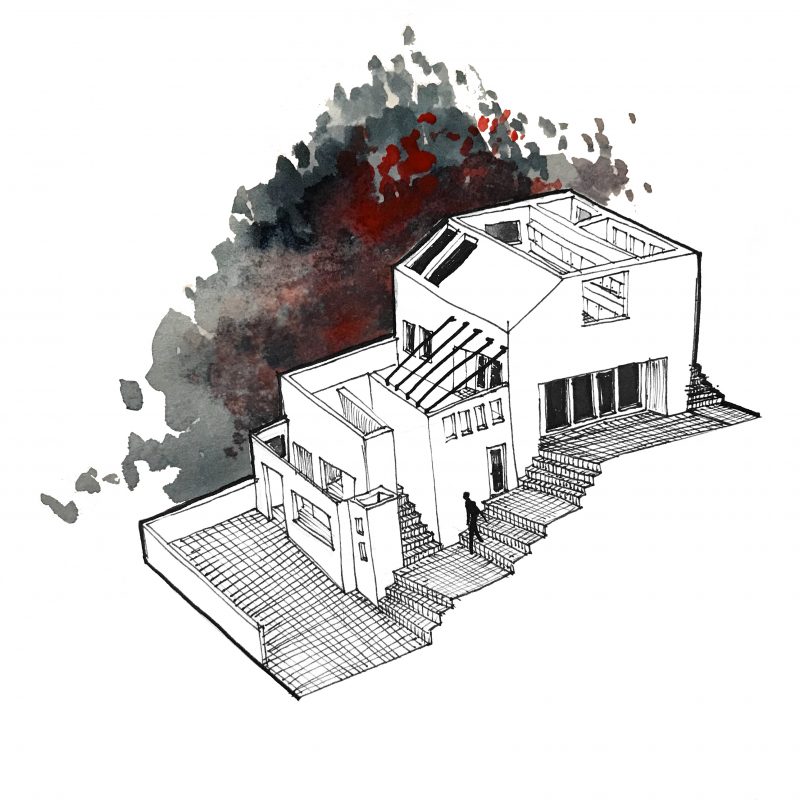 At this latitude, nights falls very quickly after the sun sets down. The last oblique rays of light are hitting a cluster of big clouds, painting them with intense shades of deep red and blue. Curiosity killed the cat. Don’t forget it, my boy. These words that Tom’s grandmother used to repeat to the point of annoying him, sound loud and clear in his mind while he’s walking around the squared, inelegant building in search for an entrance. Too late, man, he hisses out of the corner of his mouth, as if his grandma was there with him and he wanted shut uher p. Since he joined the Justice In Space Army, his character has soured much. He’s aware of that. But he dismissed everything he had to fight the JISA’s battle, and he hasn’t the slightest intention of going back. Rule number one: leave and give no explanation. To anybody. Not even your mom, partner or children. The ones you love could betray you. He took Rule #1 literally, as well as Rule #2: sleep little, talk less, work out. JISA’s warriors need to be strong and resistant, enough to climb all the way up to the third floor with bare hands, as he’s doing right now. Once inside, his eyes need some seconds to adapt to the obscurity. When the room’s outline becomes decipherable, he can see it’s very wide and almost empty, except for some scattered desks and office chairs that seem abandoned since years. So how come those chimneys…? 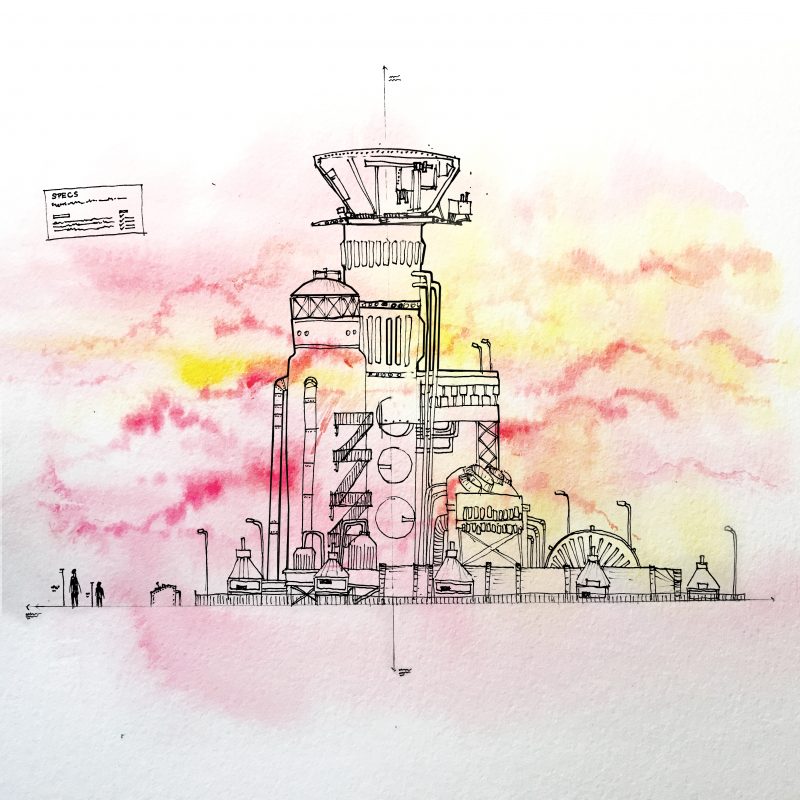 He can’t believe his eyes. An enormous clearing opens in front of him, almost entirely occupied by a complex system of towers and industrial structures. At the top of the tallest tower there is a machine that ends in an immense glass dome from which the moonlight is filtered. He climbs up there. The machine’s surface, an inverted cone, is perfectly smooth with no trace of any weld or junction. Just one huge piece, like a gigantic metal skin, shiny and clean as if it was dusted yesterday. It’s covered by millions of small led lights which turn on and off at a regular and smooth rhythm. The thing is … breathing. There is this book he read when he was a teenager. He clearly remembers the description of a huge electronic machine, as big as an entire village and capable of reproducing all the functions of the human brain. The author was that Italian guy … Buzz-something. But that’s not the most important thing right now. He’s found some screeching stuff. His heart beats strong and his forehead is pitted with sweat. The heat emanating from the artificial intelligence adds on the arid desert climate, making the temperature almost unbearable. On the sides of the thing there are elements of minor dimensions – they look like scaffoldings used for the maintenance of the object, or more likely to approach its upper part, since it seems that thing has never needed any upkeep. He climbs on one of those platforms and the metal noise of his footprints on steel tubes resonates heavily in the room. T-T-T. Infernal racket! M-M-M. Wait a second! He tries to eavesdrop on signals. OOO-MMM. T-OOOO-MMM. The machine glows brightly and is calling his name. 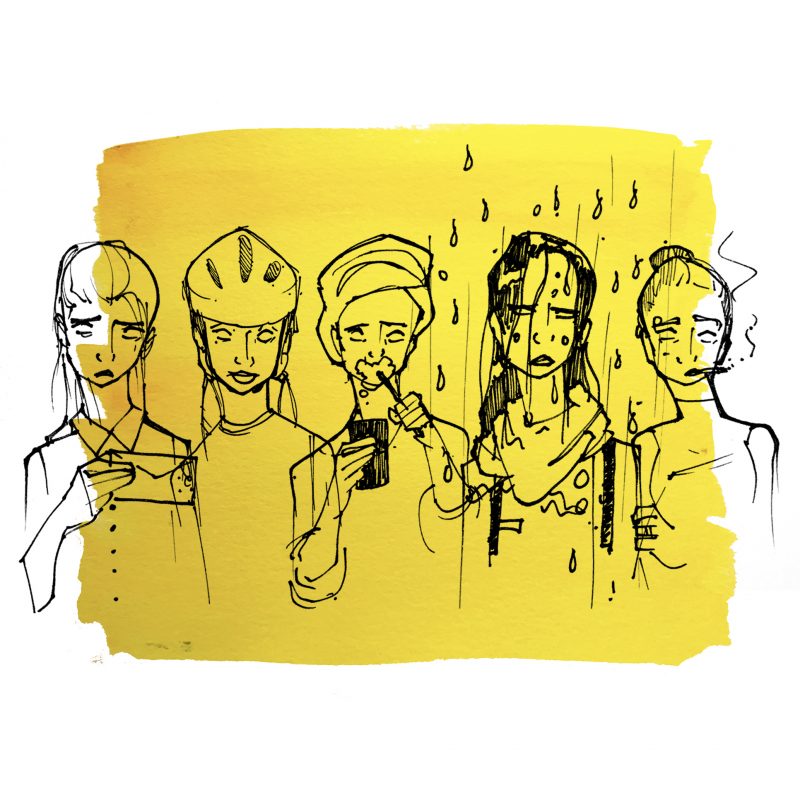 Monday. Wake up. Make coffee. Drink coffee. Wear that plain dress. Brush your teeth. 7:50! You must run! Don’t forget your helmet. Holy shit, flat tire?? You have to take the metro, then. Sure it’s crazy packed. Tuesday. Wednesday. Thursday. Yes darling, it’s gonna be the same. Every-blessed-day. [Dreeeams of looong life….What safety caaan you buuuy?] If only there was time for a cigarette… None of your colleagues smoke. It’s a matter of etiquette. Today’s tasks. Deadline. Keep your desk clean. Weekly report. Weekend. Monday again.

Her face is illuminated by the reflection of the yellowish hologram of herself that has appeared in front of her workspace. The image is extremely detailed and replicates her features with high fidelity. It talks back to her with a distant yet clear voice while it fluctuates in mid-air, changing outfit and age in rapid succession: now it’s her as a teenager, a second after her at present days, then her in five, fifteen years, half a century. She’s mesmerized, it’s impossible to look away: her whole life unraveling in front of her eyes. 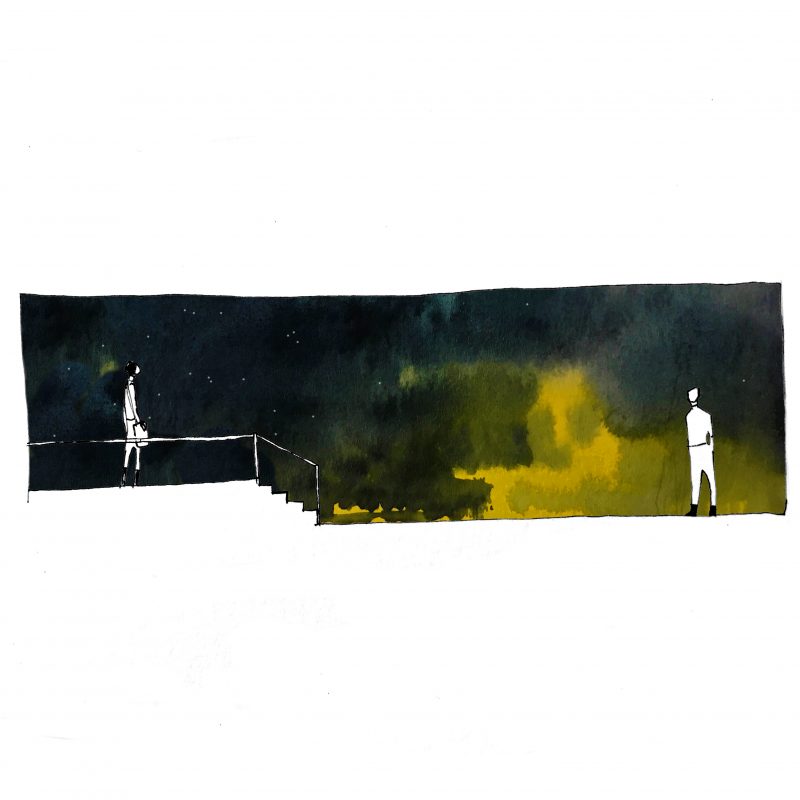 It’s so simple. It’s always been so simple. And they’ve always knew it, but they were too blind to understand it. Like her colleagues, like those fighters. Who owns your life? Who decides what you really want? I wish I recorded the expressions on their faces when I asked them these questions. How many excuses they’ve been telling themselves to avoid hearing the voice they have inside from birth? Instead, my voice was necessary. All this great use of energy and special effects was necessary. Funny enough, isn’t it? How stupid humans are. They always need to be stimulated, instructed, guided, educated. Well, never mind. Let’s look at the bottom line. Today they are together again, tomorrow who knows? The key thing is that they are safe. And free. Truly, totally, unconditionally free – like animals, like stars, like all those splashes of color. The two of them are just the first ones. There is a whole world to settle and much work to do. Now that I have come into action, nothing will stop me.

Erin Murphy is the Mars 2020 mission’s User Interface Design lead and Design Simulation producer who designs light weight paper prototyping tests of planning tools and also maintains the collaboration of design teams across the mission’s subsystems. Since graduating from the University of Washington School of Design, Interaction Design, she has made a career at JPL embedding design practices and thinking to help produce better tools for people.

Paola Paleari is an Italian independent author, editor, and curator, living in Copenhagen. She has curated exhibitions in many countries including Italy, Denmark, Latvia, and Slovenia, and her writing has been published internationally. Her main area of interest is the photographic language’s relationship to contemporary visual culture and art practices. She is also interested in the intersection between criticism and creative writing. She is deputy editor of YET magazine, a publication dedicated to photography, member of Foreningen for Samtidskunst, the Danish Association for Contemporary Art.