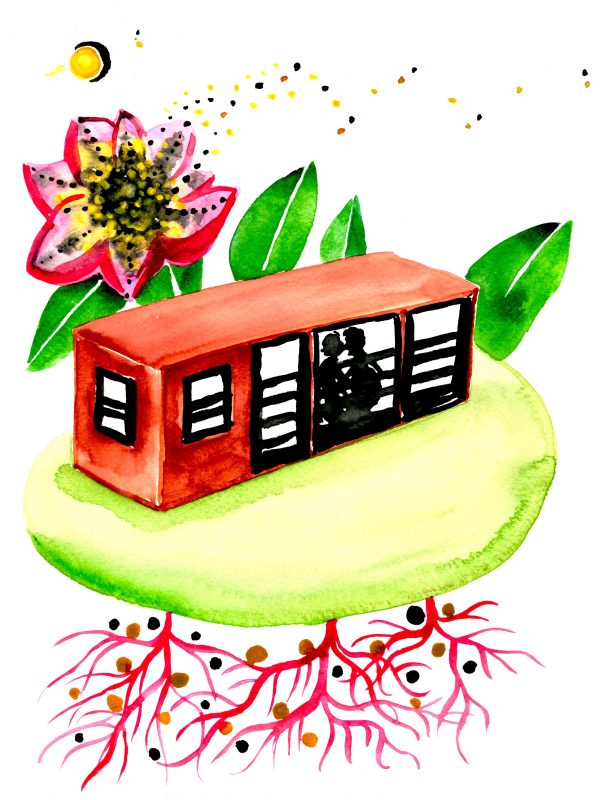 from the griddle with an aluminum chisel. Hide the day’s cash

in a walk in freezer behind purple cabbage. Then

we kiss in windows buzzing with pink light.

This diner was a train car, half a century ago.

If we stand still enough, we can still sense

Outside: sky petaling among near-dusk.

The great earth below the diner tangled with hemlock

in their beds. We are connected to everything—

the growl of eighteen-wheelers idling in the lot.

Tectonic plates grinding against each other like a great jaw.

The war, not far off. Bullets blooming

What if we uprooted, stoked the coal engine

of this old locomotive and disappeared?

What if we sought other lives, further afield?

Would we be forgiven? 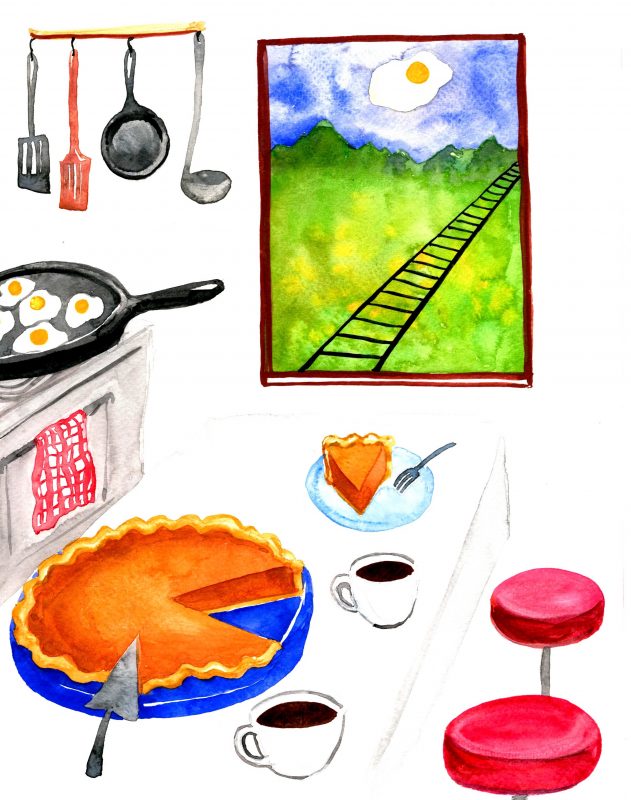 Grandma Blanche made vinegar pie
during the Depression. Marked ingredients

things you’d get from a week’s
worth of rations, if you saved up careful.

We have our own recipes, now, from our own
sorts of savings. Pie made from sweet grass

and corn husk. Pie made from tree bark.
Pie with a wire cutter hidden inside.

into the dough as she kneads,
rolls, drapes silk-like across the hollow mouth

of the tin. How she beckons it at last
from the oven, sets it on the roof and leaves

it for weeks— as if a smoke signal of peach steam
cooling to rot might bring the child back. 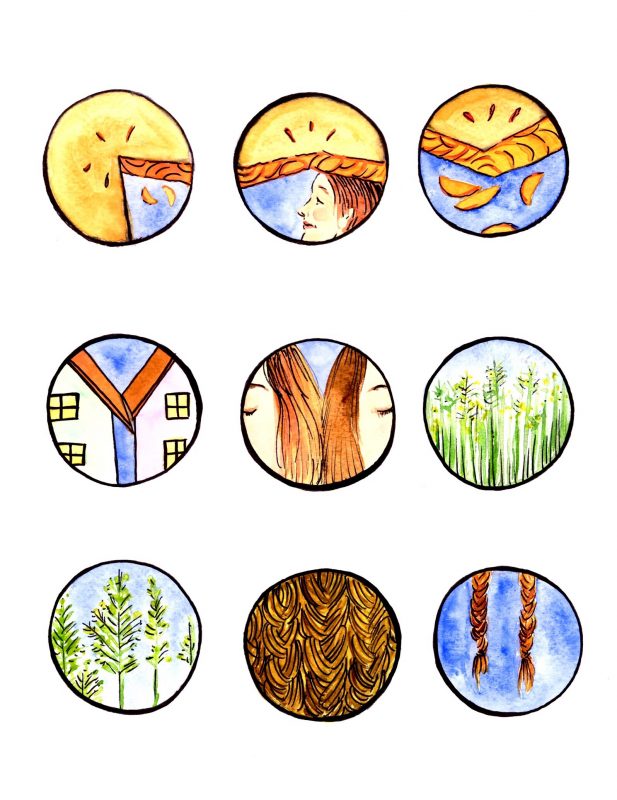 Neither Lena nor I have cut our hair since the war started. We were ten years old. Now we are sixteen. Lena’s hair is the color of B grade maple syrup. Mine is the color of pressurized wood in the rain.

Sweet grass grows tall between our houses. We sit in the field and braid stalks into baskets or summer crowns or ropes. We play soldier. I volunteer as hostage, and let her bind my ankles with thick, green grass.

Our houses were built so close together, the roofs touch. When little explosions wink in the valley, miles below, we lean out our windows and braid our hair into each other’s so we’re attached. Then, we can hear each other’s thoughts without having to speak.

A “witch ladder” is knot-tying magic, where a witch controls a person by tying and untying secret, hidden knots in their hair. After the third raid, we stay up all night tying one hundred knots against each of our scalps. But it doesn’t work. Nothing gets better.

When Lena and I fight, I threaten to shuck off all my hair with a Swiss army knife. If I do this, Lena’s hair will fall out too. So far, it’s never come to that.

My biggest fear? Lena being taken without me. If the soldiers come, I want them to come for us both. I have a lock of Lena’s hair in my bedside drawer, just in case. If I need a way to tether her.

Once a year, we measure our pigtails. First, stretching like wheat in late summer. Then, longer than a shotgun barrel. Then, braids as tall as the twin spruces in the backyard. Sometimes, mine grows faster. Sometimes hers. We overtake each other in turn. Call it a race towards the ground. Towards summer’s end. Towards whatever happens when girlhood—and all the rest— is over.

There’s a superstition that says the act of un-braiding will conjure a storm at sea. When sailors are away on a voyage, women must leave their hair plaited until their sweethearts return. Only then can they allow themselves to loosen, lock by lock.

When the fourth raid comes, so does the rainstorm. It flattens the sweet grass to the earth. It leaves strange crop circles. I wake with my hair unlatched from my body and loose like milkweed silk. In the distance, thunder tangles with other sounds, like thunder. Lena’s room, empty. Her pigtails severed and abandoned on her pillow. How they rest like sisters; side by side, asleep. 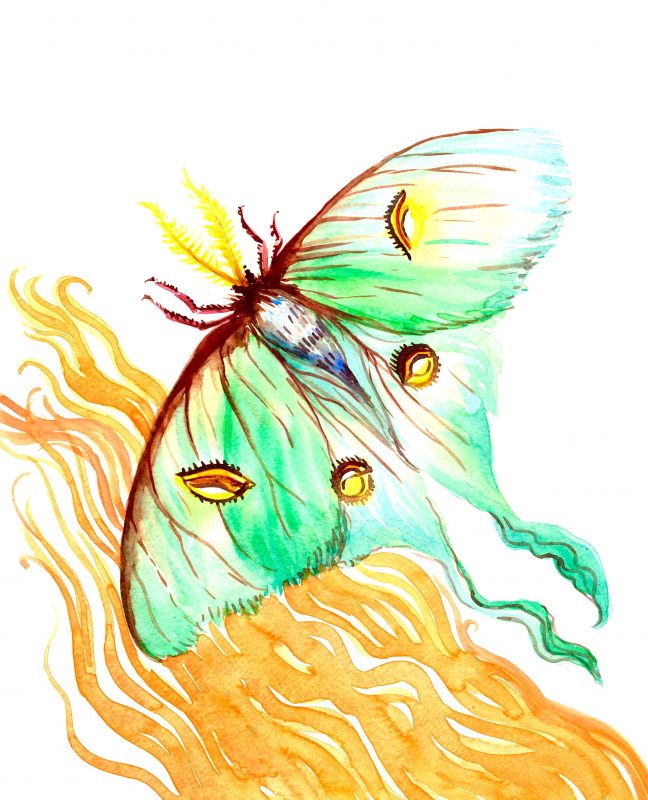 Actias luna, or
the Luna moth, re-
born from the cocoon
as a pale jade kite
with its own orbit
of moons, with a circus
banner trailing from its tail—
but with no mouth.

No mouth! No tongue to pray
over the garnet syrup
of a currant pie; no lips
to croon Landslide with the radio;
no teeth to unlatch the brass
button on a man’s Levi jeans.
Imagine, knowing
all your hunger is behind you.

& what remains? I remember
crouching at the fire pit
when a moth circled us
like an aerialist. Its wings,
two droplets of absinthe,
two great satin fans. Beautiful!
we cried, Beautiful! before
it dove, headlong, ecstatic,
into the flames. 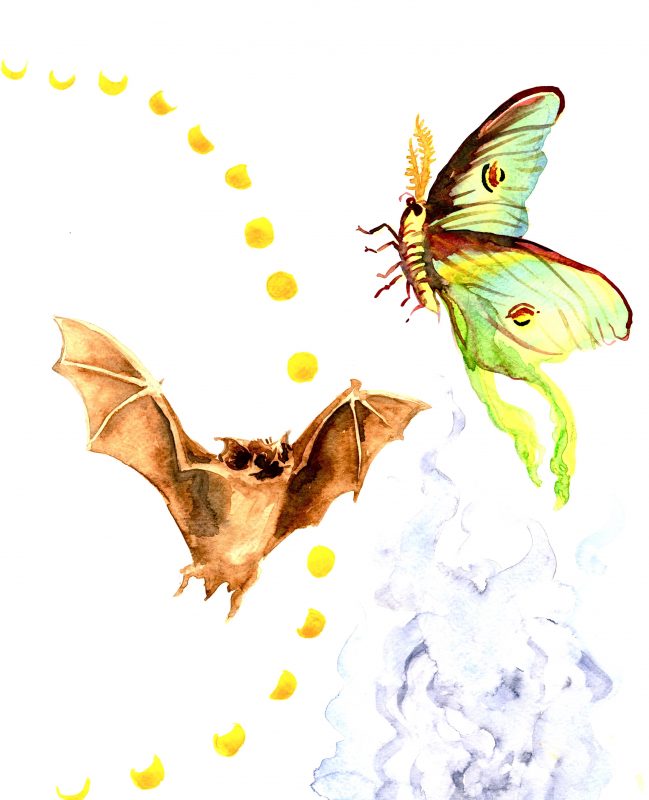 The Girl Who Became a Fruit Bat

On the night of her departure, she caught a live bat and boiled it in a pot of milk. The bat made awful sounds, less animal, more like steam escaping a sealed jar. Then the bat made no sound at all. The girl plucked three of her own eyelashes for good luck. She drank a ladleful of the milk. It wasn’t long before she felt her shoulder blades rustle and shift. Her teeth sharpened. Her nose blunted. She tried not to think of what she’d be leaving behind.

By dusk, she was gone.

Or so the story goes. It changes with each telling like a game of telephone. In some versions, the girl doesn’t sprout wings, but sews them by hand from empty flour sacks dyed in black tea. In some tellings, the girl drinks rosewater instead of milk. In others, pine sap. In others, bleach.

Don’t think local kids haven’t tried. Many of them have lost much more than the girl in the story had lost. Teens hoard spare fabric. Sicken themselves on tinctures. They tweeze out eyelashes, one, two, three, in their bathroom mirrors. And when that isn’t enough to bring the luck they need— they pluck out the rest. 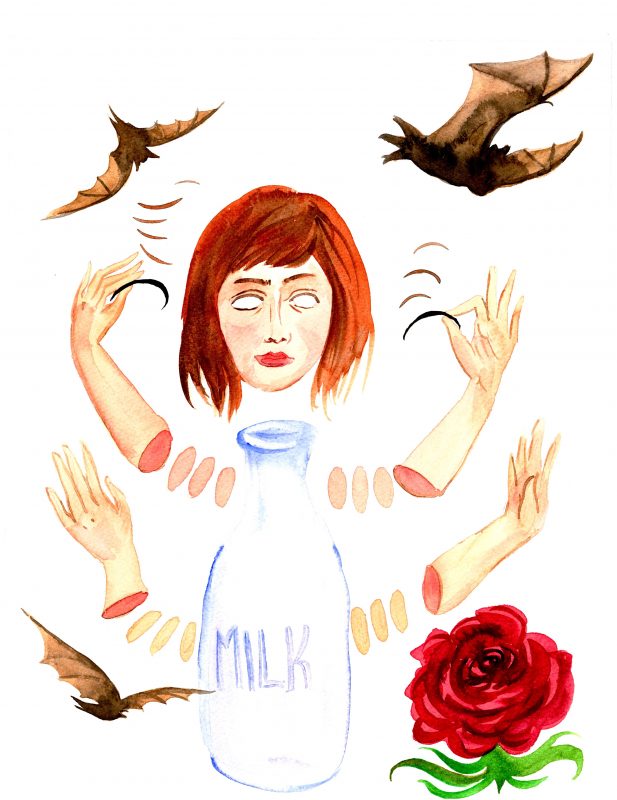 Turn away from everything
I’ve told you (bombs detonating
beside the diner; pies
with barbed wire baked inside;
braids shorn from daughters
who were erased in the night;
moths swallowed by flame;
one war, or another, or another)
& instead, this:
a single rose brightening
on a burned bush. Look
at its petals! So flush & plump
the bloom cannot contain itself.
This rose, you will want
to place your mouth on it.
You will want to kiss it
or eat it. This rose,
crowned in green sepals
outstretched like a dancer’s limbs,
this rose of unrepentant crimson,
of debutante perfume,
this rose & its festival of beauty.
Can’t you see that I’m begging?
This rose, I need you
to look upon it. This rose,
worship it. Take to your knees.
For a single moment, let
there be nothing, nothing
but this rose’s head,
bowing in rain. 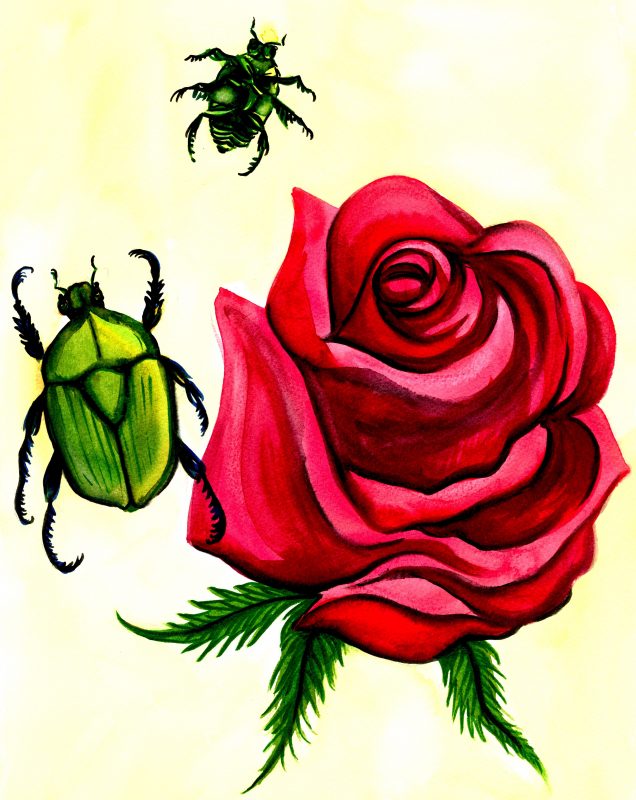 And What of the Green Beetles?

sorry, that makes it sound
simple it is not simple
the beetles spend months
carving tunnels we spend

Frances Cannon is a writer and artist currently living in Vermont, where she teaches at Champlain College, the Vermont College of Fine Arts, and the Shelburne Craft School. She is the author and illustrator several books of hybrid text and artwork: Walter Benjamin: Reimagined, (MIT Press), The Highs and Lows of Shapeshift Ma and Big-Little Frank, (Gold Wake Press), Tropicalia, (Vagabond Press), and Uranian Fruit, (Honeybee Press). She was born in Utah and has since lived in Oregon, Vermont, California, Maine, Iowa, Italy, Guatemala, France, and Mexico making art and writing books. She has an MFA in creative writing from Iowa and a BFA from the University of Vermont. Find her on Instagram and Twitter.

GennaRose Nethercott’s book The Lumberjack’s Dove (Ecco/HarperCollins) was selected by Louise Glück as a winner of the National Poetry Series for 2017. She is also the lyricist behind the narrative song collection Modern Ballads, author of Lianna Fled the Cranberry Bog: A Story in Cootie Catchers (Ninepin Press 2019), and is a Mass Cultural Council Artist Fellow. Her writing has appeared widely in journals and anthologies including BOMB, The Massachusetts Review, The Offing, and PANK. A born Vermonter, she tours nationally and internationally performing from her works and composing poems-to-order for strangers on an antique typewriter.