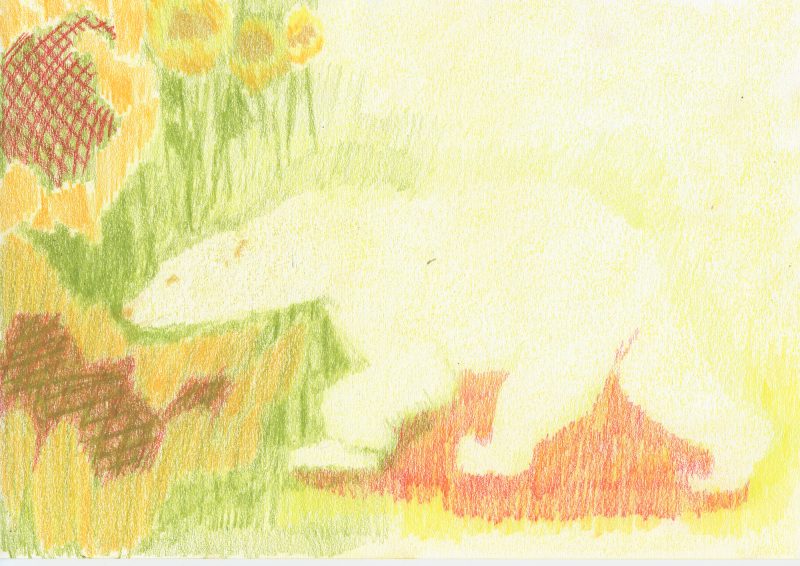 They sit, knees-kissing-knees, in the crosshatch shade of a forest of sunflowers.

The Woman who Sees doesn’t know. The light here is strange and indistinct, the sun hiding somewhere in a sky the color of honeycomb. The shadows never shuffle, never change. The Woman who Sees suspects it has been this day for many days.

But she is incapable of answering. Her mouth is covered by the hands of the Woman who Speaks. Her own hands, in return, are pressed over the other woman’s eyes.

The Woman who Sees wonders if joined together this way they look like a crooked, two-headed beast. If this forced pose is for their protection. Or if their humanity will still be recognized, two daughters mid-mitosis.

And that is perhaps the key, the open sesame, because as soon as she says this forbidden thing they hear something approaching, crushing the sunflower stalks under its heavy footfalls with wet, skull-cracking sounds.

An animal, the same color as that uncanny yellow light. A bear, whose features resolve themselves only when regarded indirectly. Though there is no high noon sun, the bear carries its blood-colored shadow like a pregnancy.

“I will uncover your mouth,” the Woman who Speaks repeats. “Please, uncover my eyes.”

This is not a ritual. Rituals have rules.

Neither is it a sacrifice, exactly — women do return from this unceremony: one, or both, or none, though from year to year in numbers and orders so unpredictable as to both invite and reject all meaning-making. The Woman who Sees knows she is connected to her predecessors only by a chain of eyes that stretches into a time that time annihilates.

But when she was chosen, her name plucked from her like a gaudy button from a cheap blouse, she nevertheless begged the surviving Women to tell her the metaphor, the lesson her journey should teach.

Some of the Seeing Women had returned blind, the Speaking Women dumb. Others returned with all their physical faculties in place but with insanity hanging over their brains like hot weather. They told her stories that were memories and superstitions mixed with strings of endless “and thens.” They said, Don’t believe what your eyes present you. Or, You cannot help but lie. They said, Don’t trust the other woman.

The Woman who Sees doesn’t know if their answers mean they learned the lesson wrong, or learned it right.

Only a single story has the tinny sound of truth: that in this place, the gods hide the sun because once a woman reached up and plucked it from the sky. From that she made the world, the night, a wound called the moon.

Here, now, the sunless sky is hot overhead and the crushed sunflowers wet underneath her and the bear is still coming. Closer, closer, and the Woman who Sees realizes it is a sightless thing, its black eyes all depthless pupil — it snuffles at the ground, searching, its white-yellow ears swiveling, listening for noises to be guided by. And though its steps thunder it makes no other sound at all.

The Woman who Speaks continues in what has become a low and frantic chant, “Please uncover my eyes, please, I’ll uncover your mouth if you just—”

Oh you stupid bitch, the Woman who Sees wails silently as the bear pauses, turns, steps into the conflicting shade of their bedded-down place. Shut up you stupid bitch. The bear is close enough now she can smell the hot alive stink of it, its breath like wet rust and ozone and something else, something primordial that makes her brain bad-hinge creak.

And surely the other woman can hear this, can hear those footfalls bringing it closer, now so close the Woman who Sees can make out the crystalline shine of saliva dripping from its muzzle. When it opens its mouth to let out a soundless bellow it reveals a throat that is not a throat but a kaleidoscopic staircase of mouths, too-human mouths with too-human teeth on and on into infinity, and she can’t scream, oh no please, she can’t even scream—

And she does, for a moment. But only to clap her freed hands over the other woman’s mouth. 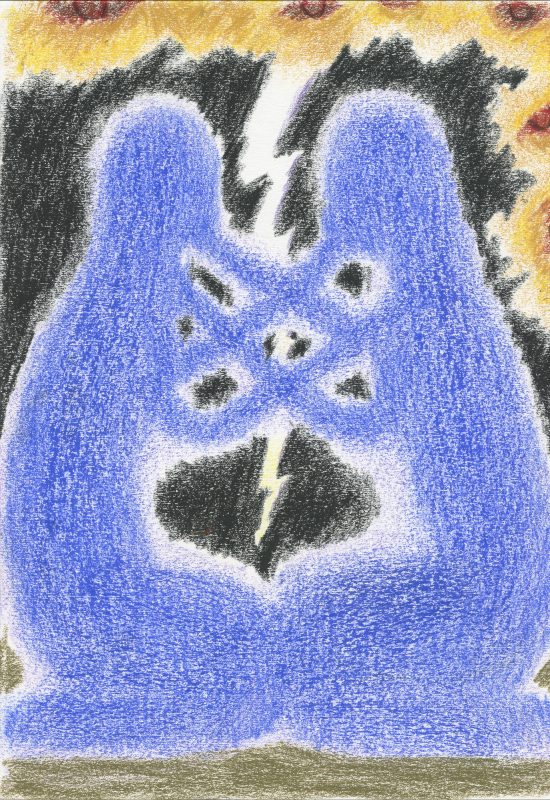 The spell breaks. The endless day vanishes with a crack of lightning.

There are two flat pans of flawless flesh where the Woman who Speak’s eyes should be.

It hadn’t occurred to the Woman who Sees that this was a kind of prisoner’s dilemma, that they were both safe as long as neither of them acted against the other. She still has her mouth, after all, could poke out her tongue and taste the sour sweat on the other woman’s hands if only those hands weren’t now retracting, rising to frantically search that eyeless face for its missing seams.

It was your fault, the Woman who Sees thinks as she lets her own hands fall away. She is unsurprised to see that the Woman who Speaks speaks no longer; her mouth is gone now, too. You should have just kept quiet.

The callousness of the words curdles her tongue, and so she says to the woman who continues to crawl on hands and knees, whose face is as featureless as the pad of a thumb, “No, you were punished.”

The bear lets out another one of those soundless bellows, swings its head in her direction. Like the day the beast is changing, becoming different, new. But the Woman who is Everything evades it easily now, in motion, unmarried, broken from that spiderweb of imprisoning limbs.

She turns and runs, leaving the Woman who is Nothing behind. 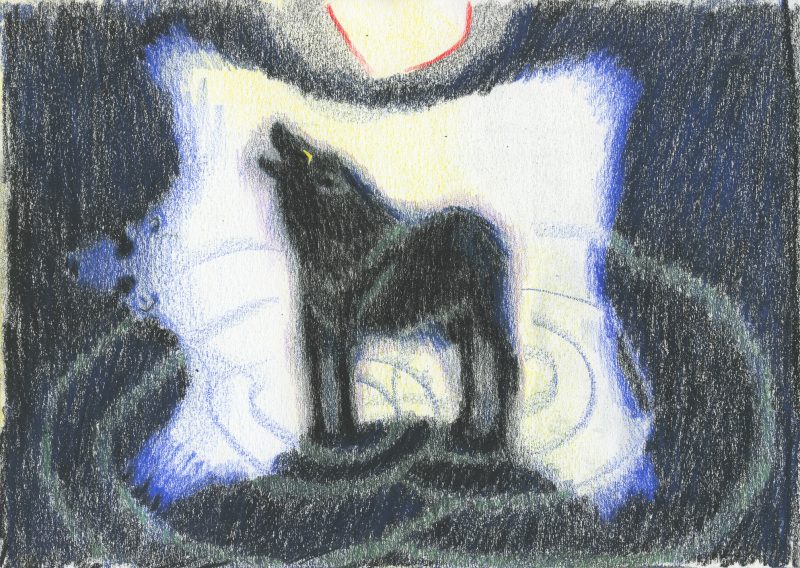 Her run doesn’t last long. Rain has made the world slippery, and so the Woman who is Everything slows, gropes through the dark over a landscape that has shifted from a forest of sunflowers to one of sharp brambles and low branches. She sings to herself softly, sure that her voice has been returned to her for a reason. She stops when around the thunder she hears breaking branches, snuffling — hunting sounds. But different than the bear’s. Watchful.

She trips over something soft and finds it is the bear’s pelt, now empty, shed like a winter coat. The magic is gone, the pelt’s fur prosaically solid, drenched with rain.

She thinks, I’ve gone in a circle, though the bedded-down place is nowhere in sight. And with that thought comes the unwanted image of the Woman who is Nothing, who can’t see that it’s dark and the danger has changed. Despite the words she has soothed herself with — it was her fault, she deserved it, if she’d only kept her mouth shut — the Woman who is Everything can’t stop hearing Don’t trust the other woman in the trees’ whispering. Because the Woman who is Nothing had trusted her, hadn’t she?

Another howl, closer this time. Through the trees she catches glimpses of yellow-eyed wolves, racing to some distant point. With the pelt still in hand she starts running after them, through the sharp undergrowth, cutting her arms and her face. 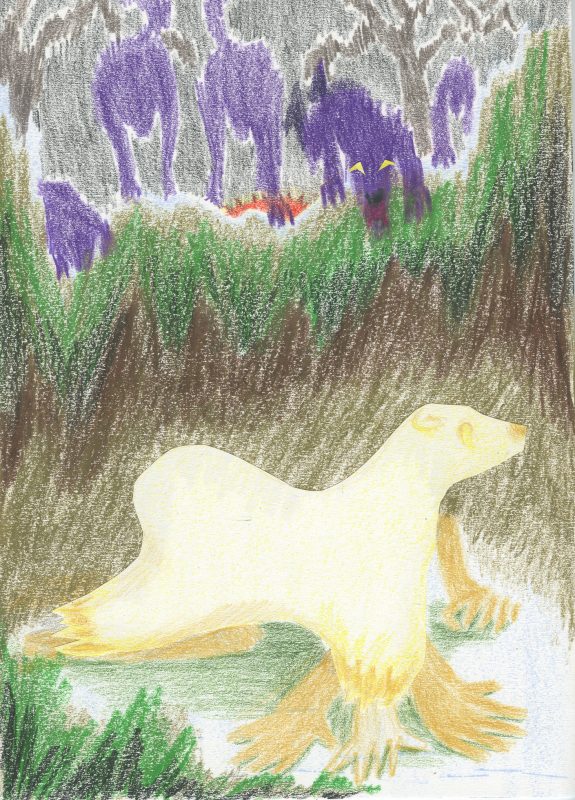 The Woman who is Nothing has fallen into a sunken place limelighted by the moon’s white-yellow glow. She sits clutching herself with a terrible panicked stillness, her blind, muted head cocked the way the bear’s had been — listening.

The Woman who is Everything half-jumps, half-falls down into this pit, grabs her by the hand. “Come on! We have to run. There are things—!” But of course there were things before.

The Woman who is Nothing shakes her head, tries to wrench free. Don’t trust her, the trees continue in their laughing sibilance.

Above them, the wolves converge at the lip of the pit in a snapping, ravenous circle.

“We’ll undo it.” The Woman who is Everything folds into that butterfly sit, tries to pose the other woman like a mannequin, but the Woman who is Nothing refuses, strikes at her with haphazard blows. “You have to help me! Just listen! Put your hands here, then pull them away on three. Together this time. One, two—!”

And surely this isn’t the lesson, that only some women are allowed to see and some are allowed to speak and if one has all the other has nothing. Surely the woman who stole the sun to make the world wouldn’t shape it so punishingly.

But what other lesson could there be?

The wolves begin to slide down into the pit after them.

“I’m sorry,” the Woman who is Everything whispers. “Please forgive me.”

The Woman who is Nothing slows, stops her blows. She reaches forward, takes the other woman into her arms. The Woman who is Everything pulls the empty bear pelt over the both of them.

And for the last time, everything changes. 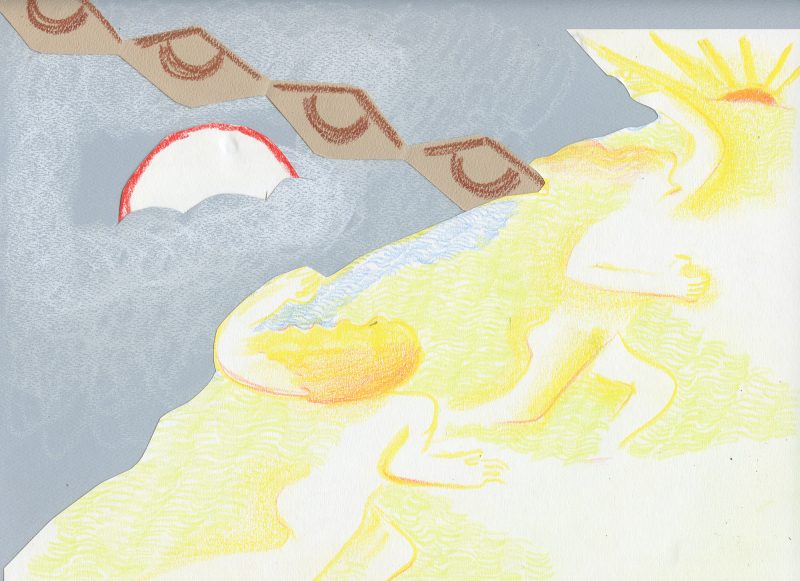 This is the place where the story diverges, depending on the teller. In some versions, the Woman who is Everything transforms into a wolf while the Woman who is Nothing becomes the bear and endless night wars on with endless day. In others, the Woman who Created the World takes pity on the women and gathers them into her arms, casts them into the sky where nothing hunting can reach them. There the women remain, two daughters divided forever.

But these stories lack that truth sound, don’t they? Filled with contradictions.

That part of the story doesn’t matter.

Because when they emerge from under the pelt, they do so together. They wear the bear’s sun-colored hide like a cloak and in doing so restore its magic. With it, they strike dawn into the darkness.

While not all the wolves are smote by the light, those that remain flee, seeking more helpless prey.

Safe now, the two look to each other. The Woman who—? But there is no descriptor. The addendums to their personhood have all fallen away.

Depending on the story, they speak. Or they wink. Or they reach out and take each other’s hands.

They listen, and together the Women chase after the wolves.

Jackie Feng earned her BFA from the University of Illinois-Urbana and her MFA from Boston University and attended the Skowhegan School of Painting and Sculpture. She now lives and works in Brooklyn, New York.

A.E. Lhamon lives in the deep swamps of Louisiana. She recently graduated with an MFA in Fiction from McNeese State University, and is the former fiction editor for the McNeese Review.